This 1 April 2020 video from the USA says about itself:

Amazon fires an employee scared for his life amidst COVID-19. John Iadarola and Jayar Jackson break it down on The Damage Report.

Detroit Amazon workers strike to demand COVID-19 protection. By Jerry White, 1 April 2020. Amazon workers at the Detroit area DTW1 facility walked out Wednesday to demand the closure and sanitizing of the warehouse after a third worker tested positive for COVID-19. 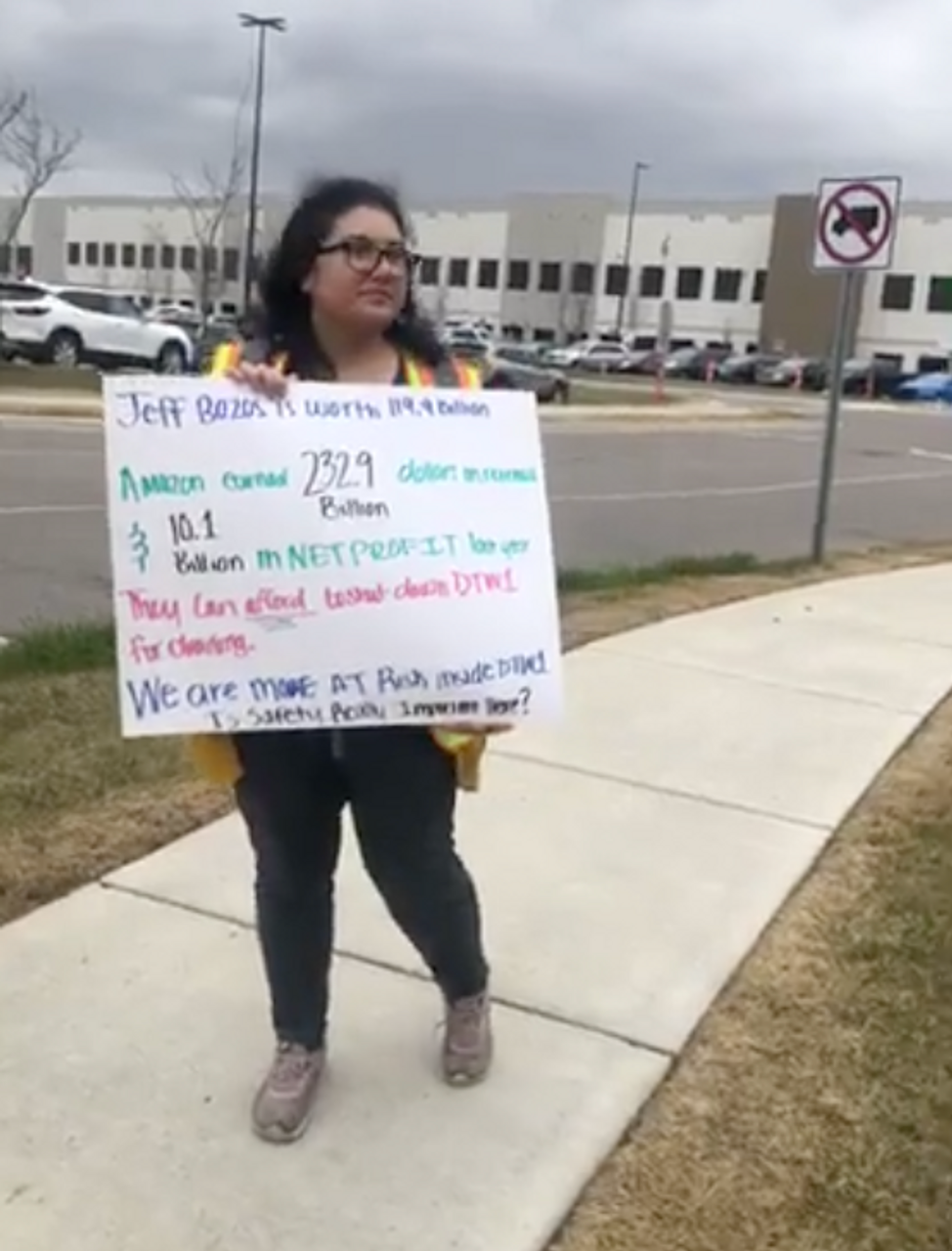 US Conference of Mayors survey shows severe lack of equipment to combat coronavirus pandemic. By Bryan Dyne, 2 April 2020. As the US death toll nears 5,000, a report to the federal government from mayors of 213 cities showing a desperate shortage of lifesaving equipment has fallen on deaf ears.

NURSES held a second day of protests across seven US states today to highlight a lack of protective equipment in Hospital Corporation of America (HCA) hospitals – the wealthiest privately run chain in the country.

“When we are infected, we become a real danger of infecting everyone else around us, patients, hospital staff, and a risk to our own families,” Kim Smith, a registered nurse in Texas said.

The protests, which started on Wednesday, were organised by the National Nurses United (NNU) union, which represents more than 10,000 nurses at HCA hospitals – privateers with a revenue of $46.7 billion in 2018.

Amid growing anger over criminal response to COVID-19 crisis, Washington threatens war. 2 April 2020. Trump issued threats against Iran and Venezuela yesterday, both weaponizing the pandemic and desperately seeking to divert mounting social tensions in the US itself: here.

CUBA has blasted the continuing US economic blockade warning of a “violation of human rights” after a shipment of vital medical aid from China was stopped from reaching the country on Tuesday.

Washington was accused of acting with “Wild West brutality”, using the Covid-19 outbreak as an opportunity to “strangle the Cuban Revolution.”

“Cuba denounces the fact that medical supplies from Alibaba Foundation to help combat Covid-19 have not arrived in the country due to the criminal US blockade against the island nation,” President Miguel Canel-Diaz blasted.

VENEZUELA has accused Washington of using the deployment of warships to the region as a smokescreen to deflect attention from the “tragic humanitarian crisis” unfolding in the United States due to the corornavirus outbreak.

The Trump administration increased pressure on Venezuela last week when it placed a $15 million (£11.9m) bounty on the head of democratically elected President Nicolas Maduro.

The commander of the aircraft carrier USS Theodore Roosevelt has sent a four-page letter to his superiors appealing for the Navy to move nearly his entire crew into quarantine on the US Pacific island territory of Guam, where the vessel has docked since coronavirus infections were detected on board: here.

“Lies, damned lies, and statistics”—popularized by Mark Twain. As the number of confirmed coronavirus cases in the United States surpasses 200,000 and the number of dead nears 5,000, increasingly sophisticated justifications are being made for the continued inadequacy of the federal government’s response to the pandemic. One of the most recent is a study from the Institute for Health Metrics and Evaluation (IHME), which paints the massive outbreak in the country as nearly over, with two weeks to go until the worst is past: here.

Without work and regular paycheck, millions of Americans at risk of eviction as rent comes due. By Jacob Crosse, 2 April 2020. In New York City, the epicenter of the coronavirus epidemic, up to 40 percent of tenants are expected forgo rent payments this month.

US Bureau of Prisons implements 14-day national lockdown as coronavirus pandemic takes hold. By Sam Dalton, 2 April 2020. The death of another inmate at the Oakdale Federal Correctional Institution in Louisiana was confirmed Wednesday, taking the total of deaths among those incarcerated at the prison to three.

Tennessee governor’s delay in issuing stay-at-home order means thousands more will die, physicians warn. By Warren Duzak, 2 April 2020. “This is not a mandated shelter in place order, but it is a strong urging for Tennesseans to stay at home,” Gov. Lee said during his daily media briefing: here.

1 thought on “Coronavirus pandemic update from the USA”