This 6 August 2019 video from South Korea says about itself:

Japanese-American director Miki Dezaki is in Korea with his ‘comfort women‘ documentary film “Shusenjo: The Main Battleground Of The Comfort Women Issue“. For over the span of 3 years, he had been tracking down vivid stories across Korea, the U.S. and Japan to make his film.

His film is distinguished from existing wartime sexual slavery documentaries in that it contains stories about activists who support the victims and interviews of Japan’s so-called ‘far-right revisionists’. The film had immense repercussions in Japan when it was released there last April.

By Isabel Roy in Germany:

Shusenjo: The Main Battleground of the Comfort Women Issue: Documentary about war crimes and historical revisionism in Japan

In late 2019, the documentary Shusenjo: The Main Battleground of the Comfort Women Issue, directed by Japanese-American filmmaker Miki Dezaki, was shown at a well-attended screening at Leipzig University in Germany. The film was shown at several European universities last year, following a US tour in 2018.

The valuable documentary treats the so-called “comfort women”, women who were forced into prostitution in military brothels both in Japan and Japanese-occupied territory during World War II. Most of the women came from Korea or China. The subject has been the source of tensions between South Korea and Japan for decades.

In his movie, Dezaki interviews historical revisionists from far-right circles, politicians and historians who have studied comfort women, as well as activists working for the recognition of the victims.

Following the release of his film, which Dezaki completed as his masters thesis and financed through Kickstarter and with his own money, he was sued by five of the interviewees. In the film, the latter deny both the responsibility of the Japanese government for the comfort women and their circumstances in the brothels. Dezaki also received several written threats and his movie’s distributor was sued by a right-wing extremist organisation that appears in the film.

A film festival in Kawasaki (in the Greater Tokyo Area) first announced it was canceling a showing for security reasons in response to threats from right-wingers. This move was criticized by other artists, including Japanese filmmakers Kazuya Shiraishi and Hirokazu Koreeda, and owing to help from volunteers who provided additional security, the film ended up being presented at the festival in November 2019. Shiraishi described the initial decision by the organisers as “an act to kill freedom of expression.” Shusenjo (which means “main battlefield”) opens with a clip from December 2015 in which one of the surviving women, Lee Yong-Su, confronts a Korean foreign ministry official at a press conference. The press conference followed an “agreement” on the comfort women issue between Japan and South Korea.

This agreement was initiated under pressure from the Obama administration, which viewed the conflict between its two most important allies in northeast Asia (South Korea and Japan) as a threat to its confrontation with North Korea and China. 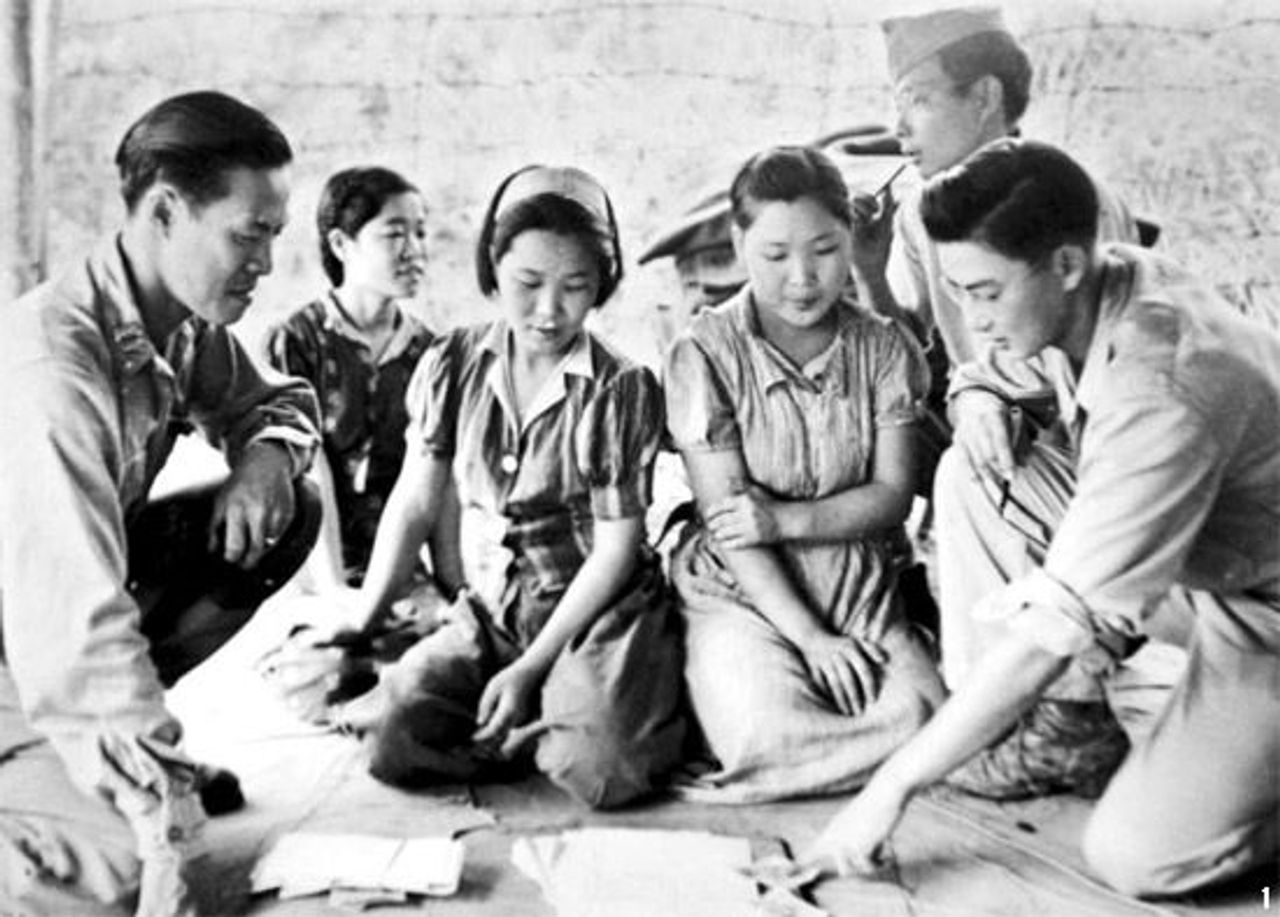 Lee Yong-Su is visibly angry and movingly accuses the official: “Who are you? What are you doing? Why do you have to kill us a second time? Are you living my life? Before reaching any agreements, shouldn’t you have spoken to the victims? You think we are old and know nothing.”

The agreement only entailed a very limited, “moral” apology to the comfort women and a donation of one billion yen [$US 9 million] to a fund to be split amongst survivors. The apology did not acknowledge the full responsibility of the Japanese military, even though historians such as Yoshiaki Yoshimi, a professor of Japanese modern history at Chuo University in Tokyo and a founding member of the Center for Research and Documentation on Japan’s War Responsibility, have been able to prove this responsibility conclusively with the aid of historical documents.

Dezaki’s film then moves on to examine the claims made by Japanese historical revisionists and contrast them with the explanations of serious historians and activists.

To give one example, the nationalist-revisionists argue that the testimonies by survivors are “inconsistent” and therefore unreliable. They also claim that although prostitution took place, the women voluntarily chose to engage in it and were “well-compensated” with “luxury goods and restaurant visits”, among other things. They present the comfort women as a South Korean and Chinese fabrication and dismiss it as “anti-Japanese” propaganda. The attendees of the showing in Leipzig were audibly shocked and disgusted by these statements.

Historians and activists in the movie explain that former comfort women from South Korea, among other countries, were faced with terrible social stigma for what they had endured. This led to many of them only speaking out years after the fact.

One particularly gripping interview features a former soldier in the Imperial Japanese Army. On the subject of women’s rights in Japan before the Second World War, he explains to the director: “Women before the war, before the constitution, weren’t quite seen as human. Nippon Kaigi wants to go back to that.” He also describes war atrocities again Chinese prisoners in which he was forced to participate.

Nippon Kaigi (“Japan Conference”) is a far-right organization that advocates a return to the monarchy of the Meiji Era (1868-1912), the abolition of women’s rights, state Shintoism, the remilitarization of Japan and a “patriotic” education in schools. It includes many members of Prime Minister Shinzo Abe’s cabinet, and Abe himself is a special advisor to the group’s parliamentary wing. Nippon Kaigi and Abe also support state visits to the Yasukuni Shrine, which commemorates Japan’s war dead, including 1,068 convicted war criminals of whom 14 are A-Class (convicted of having been involved in the planning, preparation, initiation or waging of war). 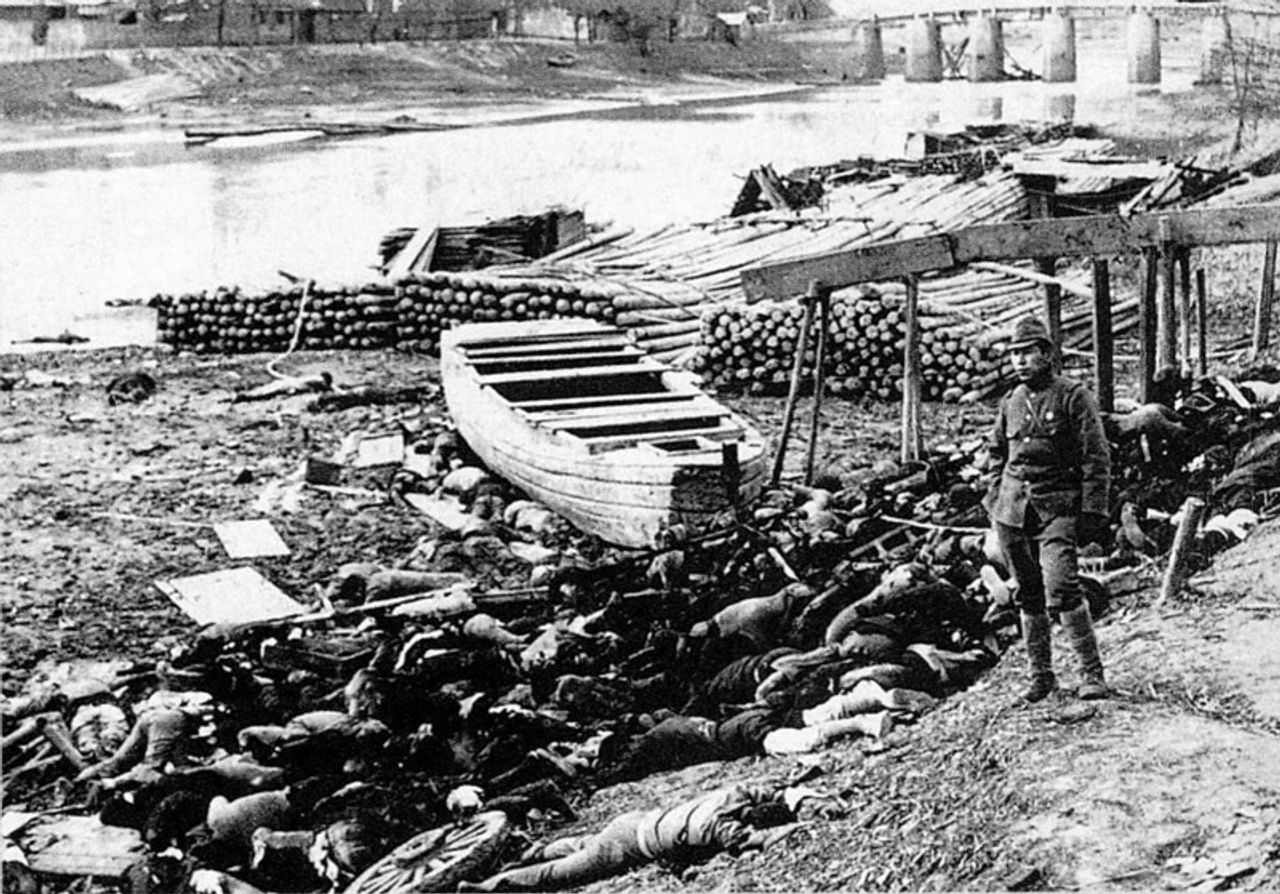 One of Shusenjo’s strong points is the way it illustrates the intertwining of far-right organizations in Japan and the US, the Japanese state and historical revisionists.

Dezaki explains how after the Kono Statement of August 1993, which acknowledged the responsibility of the Japanese imperial army for the comfort women system, ultra-right groups and the Japanese government launched a targeted campaign to relativise the crimes of the Second World War.

In 2006, Abe championed a reform that promoted patriotism as a basic aim of the education system. Additionally, the government initiated the practice of routinely rejecting Japanese schoolbooks produced by private publishers on the grounds of “grave error”, without offering any further explanation. This, in turn, led the publishers to self-censor “uncomfortable” facts that might cause offense in order to avoid financial problems.

This kind of censorship is also prevalent in the media. A notable case was the editing out of victims’ testimony from a television broadcast of the Women’s International War Crimes Tribunal on Japan’s Military Sexual Slavery, held in December 2000. This took place under the pressure of Abe himself as well as right-wing groups.

Hideaki Kase is a central figure in the network of pseudo-historians, far-right activists and politicians exposed in Shusenjo. He is a member of or occupies leading positions in the following organizations: Global Alliance for Historical Truth, Society for Dissemination of Historical Fact, Alliance for Truth about Comfort Women and Nippon Kaigi. Kase (born 1936) has written numerous books and produced revisionist films, appeared on talk shows and was a special advisor to former prime ministers Takeo Fukuda and Yasuhiro Nakasone.

Kase, who—among other things—denies the Nanjing Massacre (in which Japanese military forces slaughtered as many as 400,000 Chinese in Nanjing in December 1937-January 1938), when asked by the director if he knew the two most important historians of comfort women, simply responded: “I don’t read books by other people.” … According to him, Japan’s involvement in the Second World War can be described as “a war of national self-defence.”

As is the case in Germany and other countries, historical falsification is resorted to in Japan because its population is deeply opposed to war. When Abe’s grandfather, the war criminal Nobusuke Kishi, was released by the Allies in 1948, massive protests took place.

During the question-and-answer session after the showing in Leipzig, Dezaki, who grew up in the US, remarked “I had this question I wanted to answer from the very beginning—why are these people trying to erase history? This led me to Nippon Kaigi and I found out it is because they want to cultivate or foster this myth that Japan has never done anything wrong and ‘we only fought wars of peace’. If you were to become a soldier in the future you don’t want to believe that your country fights wars for oil, right? Like the U.S., we fight for freedom, right? The history is being erased so that people will become more patriotic.”