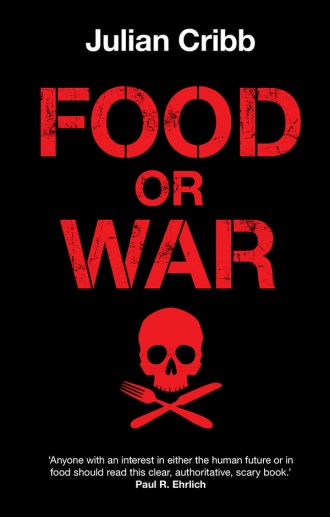 Food or War by Julian Cribb

Wide-ranging survey of the future threat posed by food shortages

WITH Food or War, Australian author Julian Cribb has written a popular and wide-ranging science and geography book about the important link between food and warfare and, in the future, civilisation’s very survival.

“Food — or fear of its lack — plays a central role in the genesis of human conflict,” he argues in the preface. More hopefully, the opposite is also true: “Ensuring a reliable, sustainable and nutritious food supply is a sure way to lower the tensions that lead to conflict.”

He provides a potted history of the close relationship between food and war, covering the Thirty Years war and the French and Russian revolutions before alighting on the starvation of Yemen today, led by Saudi Arabia and backed by the US and Britain. “In recent centuries, more people have perished during wars from hunger than have died through direct military action,” he notes.

According to Cribb, the ongoing climate crisis will come to dominate geopolitics in the foreseeable future and that will negatively affect food supplies. UN modelling shows that by 2100 the changing climate will mean a reduction in corn yields by 20-40 per cent, wheat by 5-50 per cent, rice by 20-30 per cent and soybean by 30-60 per cent. …

He notes that “ardent vegetarians… argue that eating meat must go” if we wish to avoid climate chaos but this is misleading. It isn’t just vegans and vegetarians but the scientific consensus which reveals that meat-eating must be significantly reduced if we want future generations to live on a habitable planet. …

He supports an increase in vertical farms, aquaponics and hydroponics, among other new agricultural practices.