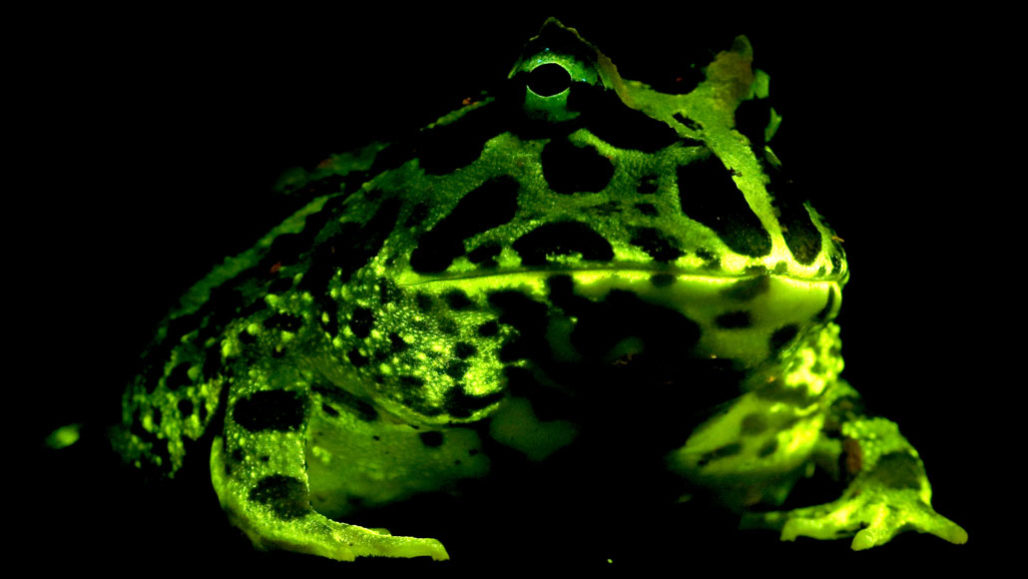 The ability to glow in a range of colors from green to yellow when exposed to blue light is common among amphibians like this green Pacman frog (Ceratophrys cranwelli), a new study reports.

Glowing frogs and salamanders may be surprisingly common

Many animals — from marine species like fish to corals and land creatures like penguins and parrots — have a hidden skill: gleaming blue, green or red under certain kinds of light (SN: 11/17/17). But when it comes to amphibians, experts knew of only one salamander and three frogs that fluoresced — until now.

Jennifer Lamb and Matthew Davis, biologists at St. Cloud State University in Minnesota, shone blue or ultraviolet light on 32 species of amphibians, including salamanders, frogs and the wormlike caecilian, at varying life stages. To their surprise, all lit up, turning brilliant shades ranging from green to yellow, the researchers report February 27 in Scientific Reports.

The effect was strongest under blue light. Among all four-legged creatures, the ability to absorb higher-energy blue light and emit lower-energy green light had previously been documented only in marine turtles. The new finding suggests that biofluorescence is widespread among amphibians.

Different species glow in different patterns, the team found. Some, such as the eastern tiger salamander (Ambystoma tigrinum), reveal strips or blotches of color. In others, like the marbled salamander (A. opacum), bones and parts of their undersides light up.

Although the researchers didn’t test the mechanisms that amphibians use to glow, the animals may rely on fluorescent proteins or pigment-containing cells. Multiple mechanisms would hint that the ability evolved independently in different species, rather than being passed down by an ancient ancestor of modern amphibians.

Biofluorescence may help salamanders and frogs find one another in low light: Their eyes contain cells that are especially sensitive to green or blue light (SN: 4/3/17). Scientists could also harness the amphibians’ ability, using special lights to search for the animals during biodiversity surveys — particularly for those creatures that blend into their surroundings or hide in piles of leaves. Lamb already has hints that might work. As she’s prowled her family’s woods at night with blue light in hand, she’s spotted the telltale glow.