Right-wing terrorism in Germany explained: How big is the threat? | DW News

On June 2, 2019, German politician Walter Lübcke was shot in the head at point-blank range for his … stance on refugees. The murder suspect is a right-wing extremist. Other German politicians have also been attacked or threatened, sparking a national debate on right-wing and far-right extremism in Germany. But how big is the threat? What does far-right terrorism actually mean and what needs to be done to deal with it? Gideon Botsch is an expert on right-wing extremism. Here’s what he had to say about the problem and its possible solutions.

By Gregor Link in Germany:

Over a week ago, German police arrested 12 right-wing extremists who were actively preparing mass murder against refugees, Muslims and political opponents. The arrests took place just before the murder of nine people in Hanau by a fascist gunmen, and the mowing down on Monday of bystanders at the Volkmarsen carnival.

According to Der Spiegel, the group had amassed large quantities of arms and ammunition to launch a coordinated series of “Kommando” raids on mosques across Germany and kill the people at prayer. Their aim was to provoke a backlash and a “civil war” throughout Germany. According to the investigating federal prosecutor, they sought to use these methods of “shock and awe” to cause havoc to the state and social order of the Federal Republic of Germany.

The suspected terrorists’ plans show striking parallels with those of the Saxon neo-Nazi group “Revolution Chemnitz”, the October 9, 2019, attack on a synagogue in Halle, and last year’s mass murder in Christchurch, New Zealand. In searches of houses, investigators discovered home-made hand grenades, large quantities of other weapons, including a functional large-calibre weapon built by a member from Saxony-Anhalt. The Halle assassin, Stefan Balliet, had built a similar “slam gun” and used it to murder two people.

The arrests once again highlight the existence of extensive terror networks, actively preparing a fascist coup in Germany and discussing the murder of thousands of political opponents.

In recent months, a number of neo-Nazi groups have been uncovered in the secret service, the police and the Bundeswehr (army). An administrative officer of the North Rhine-Westphalian police—since suspended—is among those who have now been arrested. 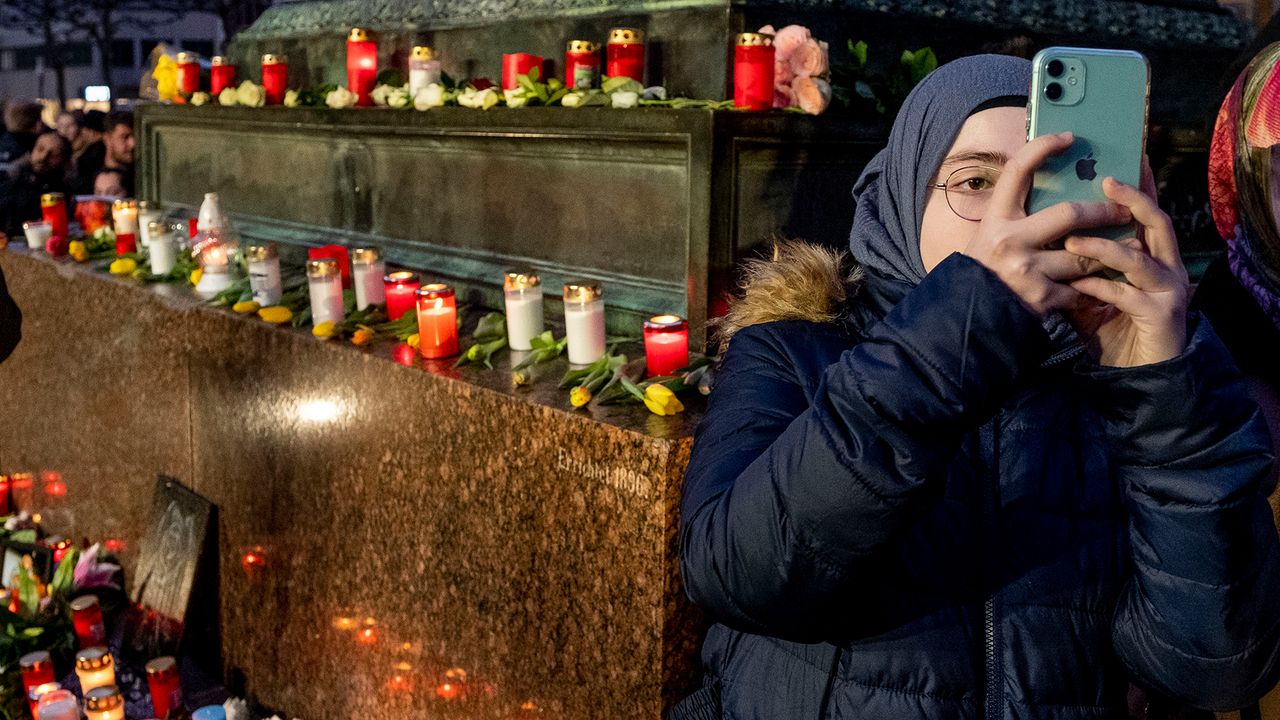 According to Bild-Zeitung, a V-man (Verfassungsschutz or secret service agent) was part of the alleged terror cell, but was the only one not arrested. Although investigators described the V-man as among the closest confidantes of the conspirators, they nonetheless stated that suspicion of his involvement had “not been substantiated”. German broadcasters SWR and ARD reported that the V-man had given extensive information to the police in early October. However, during the final week before the arrests, he had broken off contact with the investigators, who then made the arrests.

Members of the alleged terrorist cell operated in a violent neo-Nazi milieu of fascistic groups, “Freikorps” and vigilantes. They pursued relations with right-wing extremists throughout Germany and other European countries, as well as with the far-right Alternative fur Deutschland (AfD). They discussed their plans for assault in chat groups with names like “The Hard Core” and during a minimum of two face-to-face meetings. According to media reports, the men agreed to raise €50,000 to procure additional weapons and to participate in future attacks.

A week ago, more than 10 people who were under police observation attended a meeting in Minden, Westphalia, where, according to Der Spiegel, Werner S., the alleged leader of the group, presented the assault plans.

For five months, the members of “Group S.”, from all over Germany, have been the target of Baden-Württemberg police surveillance. The defence lawyer of one of the detainees stated that the police “sometimes monitored every move by the suspect”. Werner S. was also named a “threat” months ago.

Investigators considered Werner S., alias “Teutonico”, the undisputed head of the group. Der Spiegel reported that Werner S. looked for men who were “intelligent, tough, brutal, and quick” in order to build an underground army “along the lines of the radical right-wing Freikorps of the Weimar Republic.” (The Freikorps were paramilitary organisations formed after Germany’s defeat in World War I and formed the basis of Hitler’s Nazi forces).

A “Volunteer Association for the Mobilisation of Forces” would be built through a process of “military training”. “Treachery” will be “severely punished!” said one of the chats. Anyone who believes in doing “more than just taking part in demonstrations and the like” should contact Werner S. In his apartment near Augsburg, investigators found a functioning nine-millimetre pistol and ammunition.

Werner S.’s Facebook friends include an AfD official from Börde in Saxony-Anhalt. Two right-wing extremists arrested as “supporters” of the group, Steffen B. and Stefan K., are also from Saxony-Anhalt. They are among the regional leaders of an extreme right-wing militia called “Vikings Security Germania”, a spin-off from the Finnish “Soldiers of Odin”, which first appeared during the 2015 “refugee crisis”.

Another member of “Group S.”, Markus K., reportedly participated in a 2009 neo-Nazi march in Dortmund, during which hundreds of right-wing extremists attacked a demonstration organised by the German Trade Union Confederation. Stephan Ernst and Markus H., the suspected murderers of CDU politician Walter Lübcke on June 2, 2019, took part in this attack.

Thomas N. from Minden apparently hosted the group’s last meeting before the arrests. According to Der Spiegel, investigators found “a crossbow as well as axes, morning star medieval weapons, and numerous knives.” Thomas N. is close to the ultra-right “Reich Citizens’ Movement”. Referring to anti-fascist youth, he posted on Facebook that “It is time to get rid of this Dirt.”

According to the newspaper taz, Lower Saxony’s neo-Nazi Tony E. was “one of the driving forces in the group.” He is in close contact with well-known neo-Nazis from Hamburg, Harburg and Lüneburg; these people visited him after the police raid and were said to have threatened residents and journalists.

Tony E. follows former Verfassungsschutz Director Hans-Georg Maassen on Facebook and identifies himself as a supporter of paramilitary organisations such as the “German Defence League”, “Brigade 8” and the Hannibal association “Uniter”. According to taz, Tony E. is also a member of the “Freikorps Heimatschutz”, which advocates that members “prepare for the day when war will come and when it will be a question of defending our families and the fatherland.”

The group’s links with the security agencies and with “Uniter” are significant. This paramilitary association, which is registered as a “non-profit”, links former elite soldiers, reservists, security forces and arms dealers with one another; it trains the forces of far-right Philippine ruler Rodrigo Duterte.

The group Uniter was founded in 2016 by an employee of the Baden-Württemberg Verfassungsschutz (secret police). It is the organisational backbone of an armed network comprising elite police officers, commando soldiers, intelligence officers, judges and lawyers, in whose ranks have been forged the concrete plans for an armed coup on a “Day X”, along with the mass murder of political opponents.

This “shadow army” is orchestrated by André S., alias Hannibal, a former instructor of the Bundeswehr elite unit Command Special Forces (KSK). Hannibal was also a member of the founding board of Uniter and, according to taz, was the contact person for the German Military Intelligence Service (Militärischer Abschirmdienst—MAD), with whom he maintained friendly relations. In 2018, he threatened to bring in the MAD against the newspaper taz in order to stop its questioning. The MAD contact person warned Hannibal of upcoming raids by the federal prosecutor’s office, so that he could hide a laptop with sensitive information.

In December 2019, ARD news magazine Monitor published a 2018 drone video that documents the military operational training and combat exercises of the group. The video shows armed private individuals in combat gear who are practicing house-to-house fighting under the guidance of “Hannibal”. Because he illegally stashed cartridges along with fog and signal grenades, Hannibal recently had to appear in court for a violation of the weapons and explosives law; he was fined just €1,800.

Werner S. is a close ally of the right-wing-extremist Bundeswehr soldier Franco A. and has met him personally several times. Franco A. is under suspicion for planning to carry out political assassinations while falsely posing as a refugee. Though Franco A. will be charged with “preparing a serious crime that is dangerous to the state”, both he and Werner S. are currently not being held in custody.

Despite overwhelming evidence, including detailed reports from Focus, taz and SWR, at the end of January, MAD President Christof Gramm publicly denied the existence of a “shadow army” in the German state. Nevertheless, his own organisation is officially investigating 20 “suspected cases” of right-wing extremism in the secret Bundeswehr unit KSK.

It is possible that the arrest of the 12 members of “Group S.” was carried out to limit the damage and cover up the truth of these accusations. However, the fact that the group appeared to be ready to act after just two face-to-face meetings raises the question of whether it received support from the authorities.

What is certain is that the group’s extensive plans for terror, and its far-reaching preparations for dozens, perhaps hundreds, of murders, took place under the noses of the security apparatus, which is riddled with right-wing extremists. That the danger of fascist violence in Germany is greater than at any time since the end of the Nazi dictatorship is a result of the shift to the right of the entire political establishment, the propaganda of the AfD, and the systematic trivialisation, promotion and adoption of radical right-wing positions by the federal Grand Coalition.