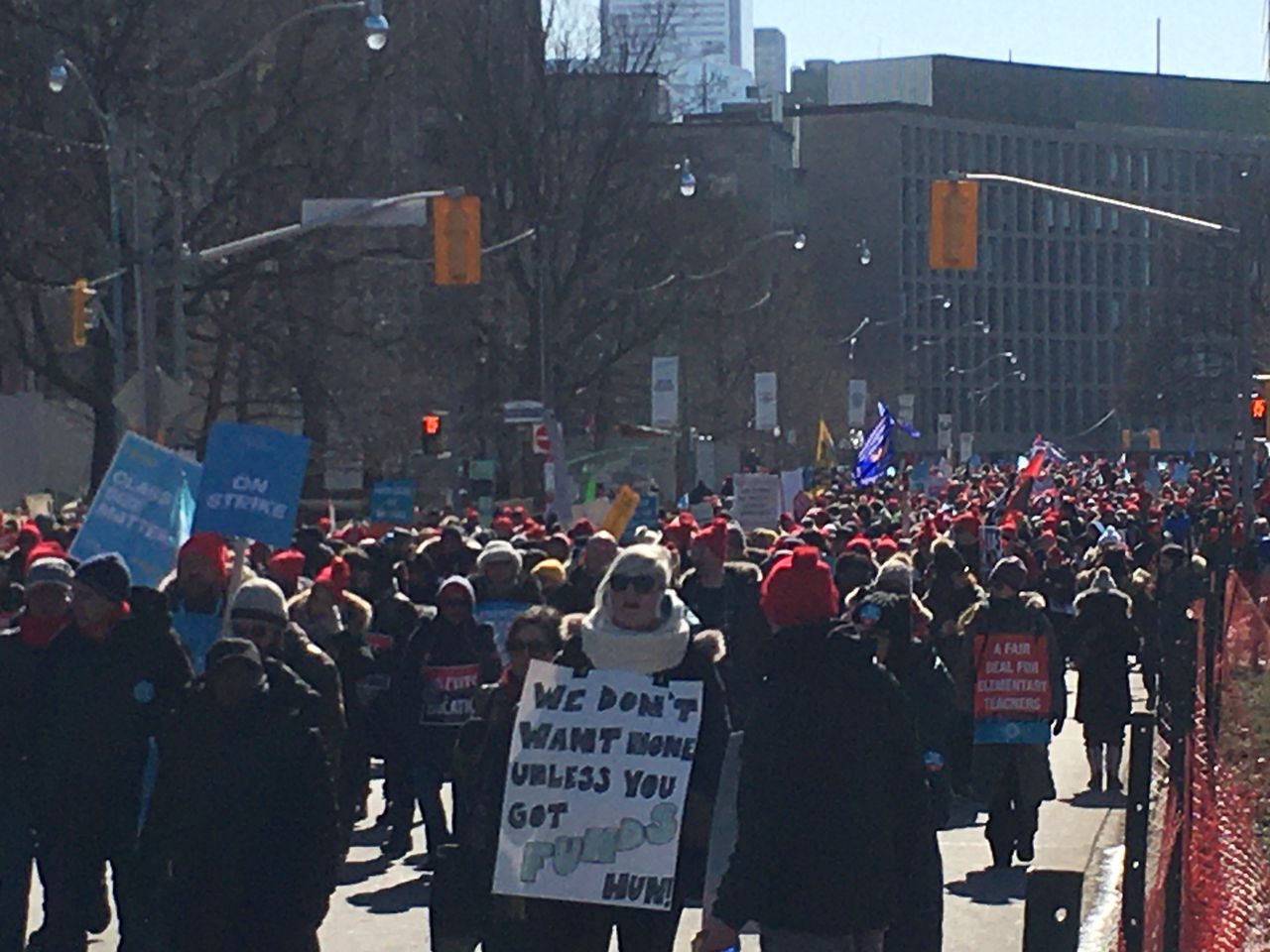 The education workers are leading opposition to the sweeping austerity measures that are being implemented by Ontario’s Progressive Conservative government and its premier, the Trump admirer and multi-millionaire businessman Doug Ford.

As part of its drive to “make Ontario open for business”, the Ford government is cutting almost a billion dollars per year from education spending, dramatically increasing high school class-sizes, eliminating 10,000 teaching positions, and seeking to impose mandatory on-line courses.

Teachers and school support staff are also a primary target of the government’s mendaciously named “Protecting a Sustainable Public Sector for Future Generations Act.” Through this law, the government is imposing real wage and benefit cuts on more than a million public sector workers, by legally capping their wage and benefit increases to well below the inflation rate for each of the next three years. At the same time, it is funneling still more money to the rich through corporate and income tax cuts.

Since 2018, and as part of the resurgence of class struggle worldwide, a wave of teacher strikes has swept the globe. Teachers and college instructors have engaged in strike action in all six continents, from Chile and Argentine to the US, Britain, Holland, Iran and India. Teachers went on strike in Colombia’s major cities Thursday and Friday to demand improved wages, health care, and the government’s compliance with previous agreements. 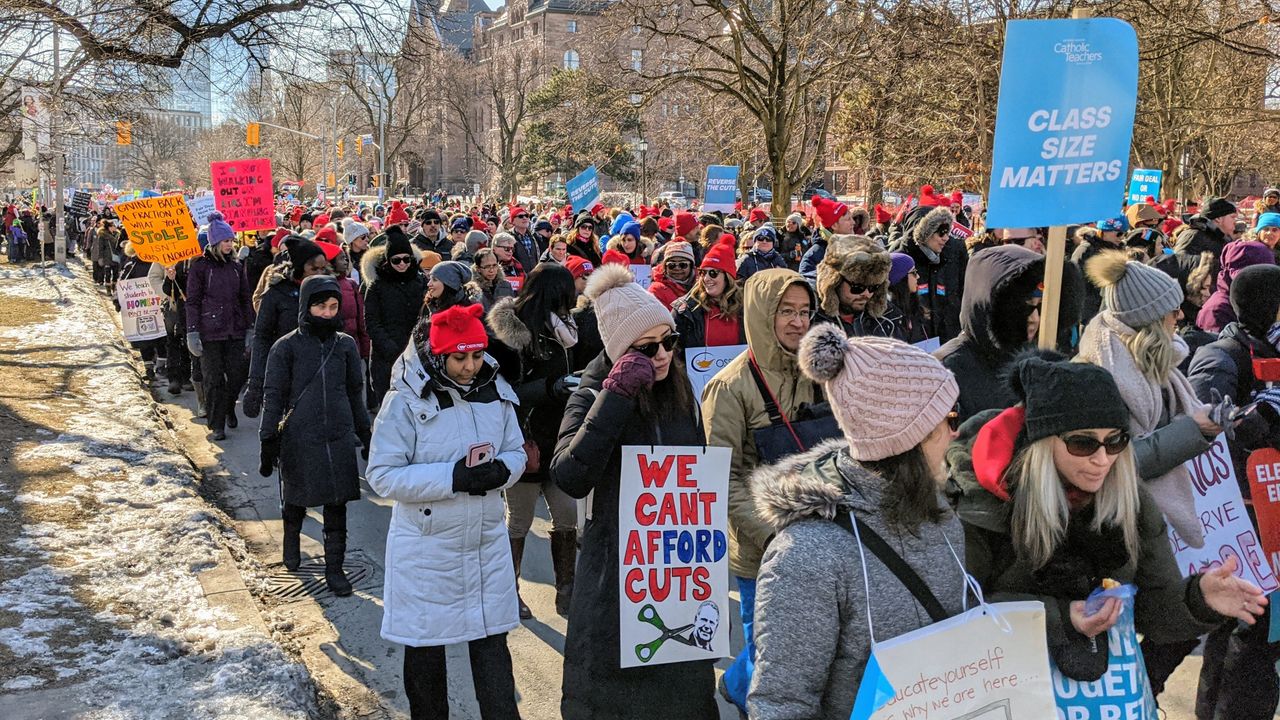 If education workers find themselves in the forefront of the opposition to austerity, it is because capitalist governments view the dismantling of public education as a key element in their evisceration of all the social rights of the working class.

… In Santa Cruz, University of California graduate teaching assistants are currently mounting a wildcat strike in defiance of the no-strike clause in the contract negotiated by the United Auto Workers (UAW) union.

There is great militancy among the teachers and educational support workers and mass popular support for their stand in defence of public education.

This 21 February 2020 video from Ontario is called Parents show support for striking teachers.

More than 30,000 teachers and their supporters rallied yesterday outside Queen’s Park, the provincial legislature in downtown Toronto. An estimated 20,000 more held a mass picket along a kilometers-long stretch of highway in Toronto’s sprawling Peel County suburbs, and 10,000 rallied in Kitchener-Waterloo, a regional center in south-western Ontario.

Many teachers brought hand-made signs that expressed their anger with the government and pointed to the devastating impact of the cuts and their blatant class character. Diana, a French-language immersion school teacher, told the WSWS, “The slogan on the Ontario license plate says, ‘A place to grow’. But it’s only a place to grow for those with money. Ford is cutting public education because they want to control poor people by keeping our kids ignorant.” 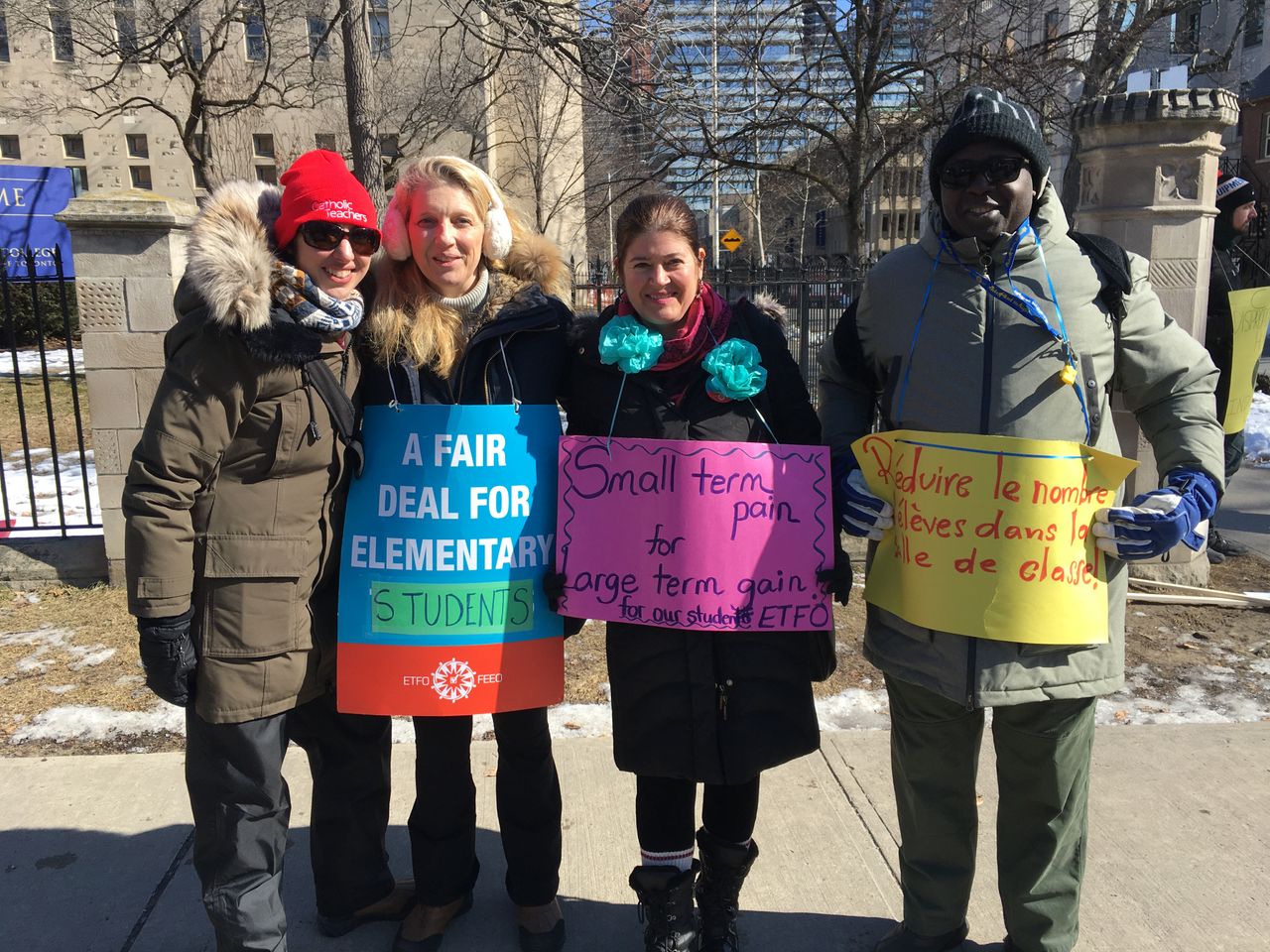 Teachers who spoke with WSWS reporters at the Toronto rally expressed great interest in and solidarity with the struggles of teachers around the world to defend public education. Groups of teachers could be heard singing “We’re not gonna take it,” one of the main protest songs sung by West Virginia teachers during their 2018 wildcat strike. …

Ford and Ontario Education Minister Stephen Lecce have repeatedly threatened to criminalize all job action by the teachers and support staff and impose their cuts by government decree. For weeks, their standard refrain has been “there is still time for a negotiated agreement.” Yesterday, Ford stepped up the Conservatives‘ and corporate media’s smear campaign accusing teachers of taking children “hostage” for resisting the assault on public education and declared the strike “unacceptable”. …

Sonia, a high school teacher, told the WSWS, “All public sector workers need to unite. The only public employees Ford is backing is the police. There are sinister reasons for this. So far, these protests have been peaceful and lighthearted, but there is a potential that things could become more tense. We saw it with [federal Conservative leader] Andrew Scheer who said the RCMP [Royal Canadian Mounted Police] should be sent against the [indigenous] Wet’suwet’en protesters blocking the rail lines. In the US, Trump says he has the police, the border patrol and law enforcement on his side. Ford wants to do the same.” 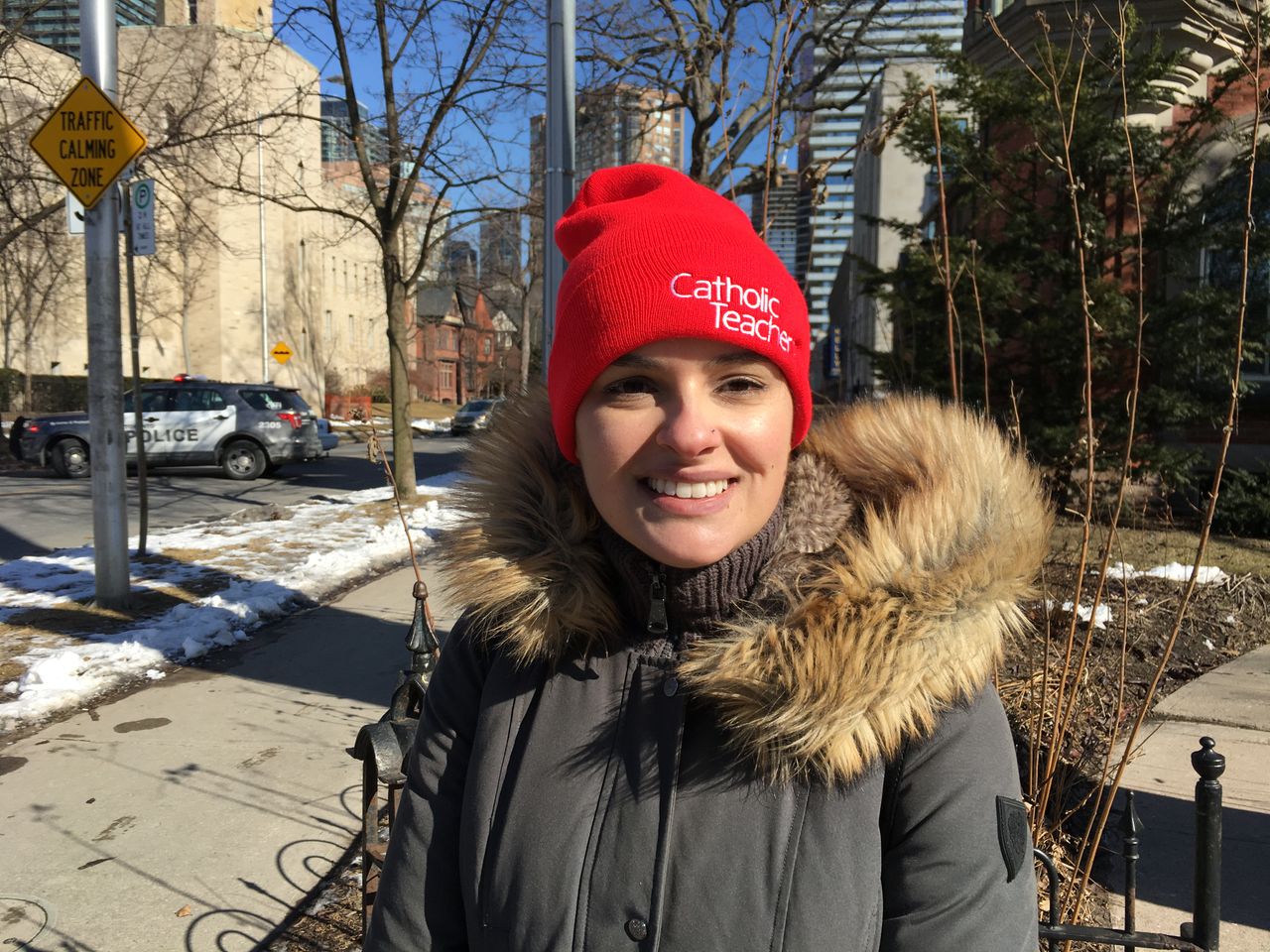 Rob, a high school teacher who spoked with a WSWS reporter at the Kitchener-Waterloo rally, discussed the government threat to legislate an end to the teachers’ struggle. “I haven’t talked with many teachers about what we would do or should do if Ford ordered us back to work. And I didn’t hear anything from the speeches today up on the stage about it. They told us that we do such a great job as educators. Sure, that’s true. They said how hard we work. True again. But I was expecting to hear something about what we do next. Other than a couple who mentioned not voting for Ford in two years, I didn’t hear anything. I want to know what we do next, not what might happen in a couple of years.” 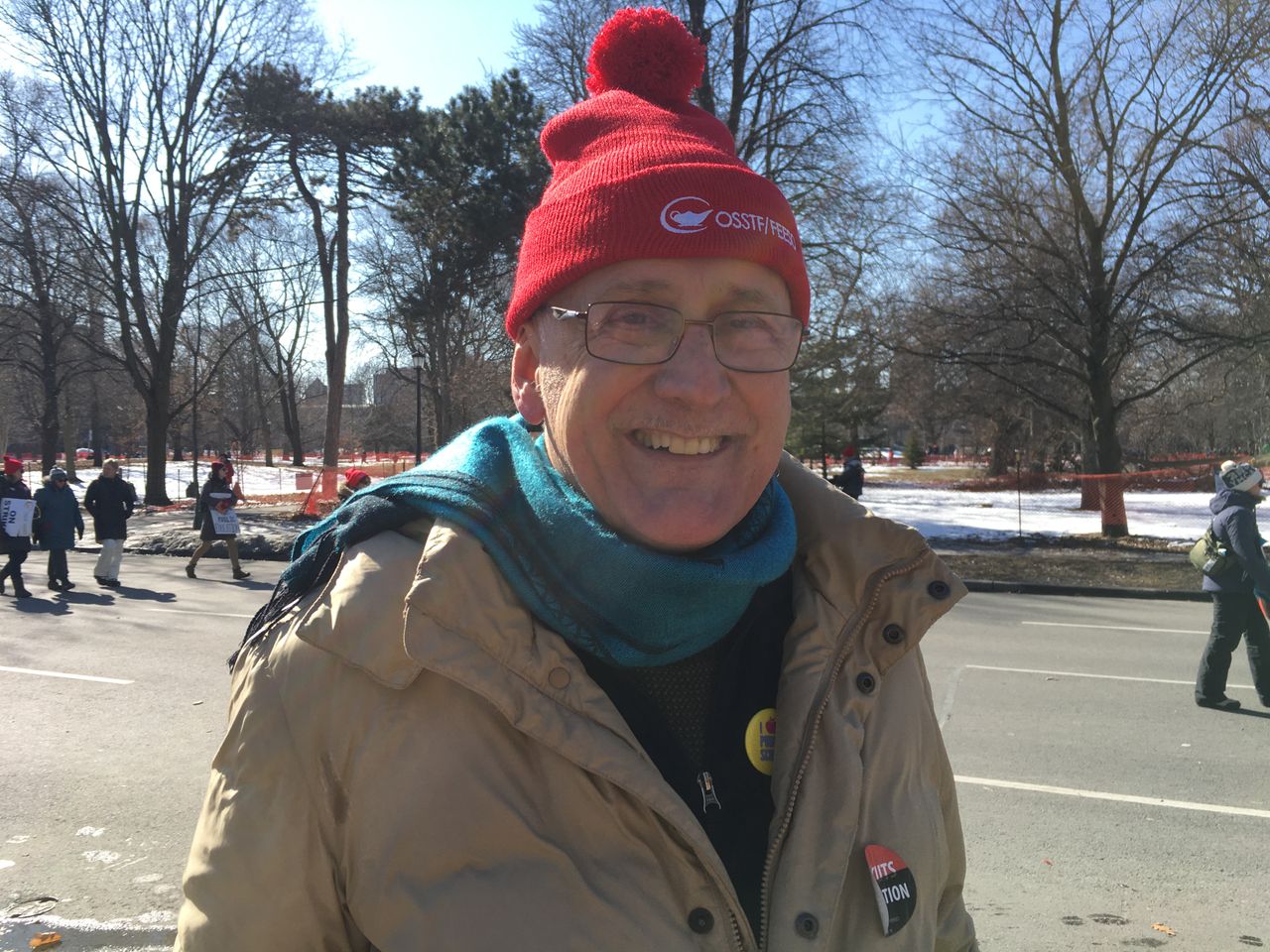 Paul, a retired teacher with 30 years in the Toronto school district, said, “If you downgrade education, you downgrade democracy. They are dis-empowering the working class. Trump reminds me of fascists in Germany, diverting anger towards immigrants, and Ford is nothing but the Trump of the North. We have to stop them because every child deserves to have an education and a good future.”