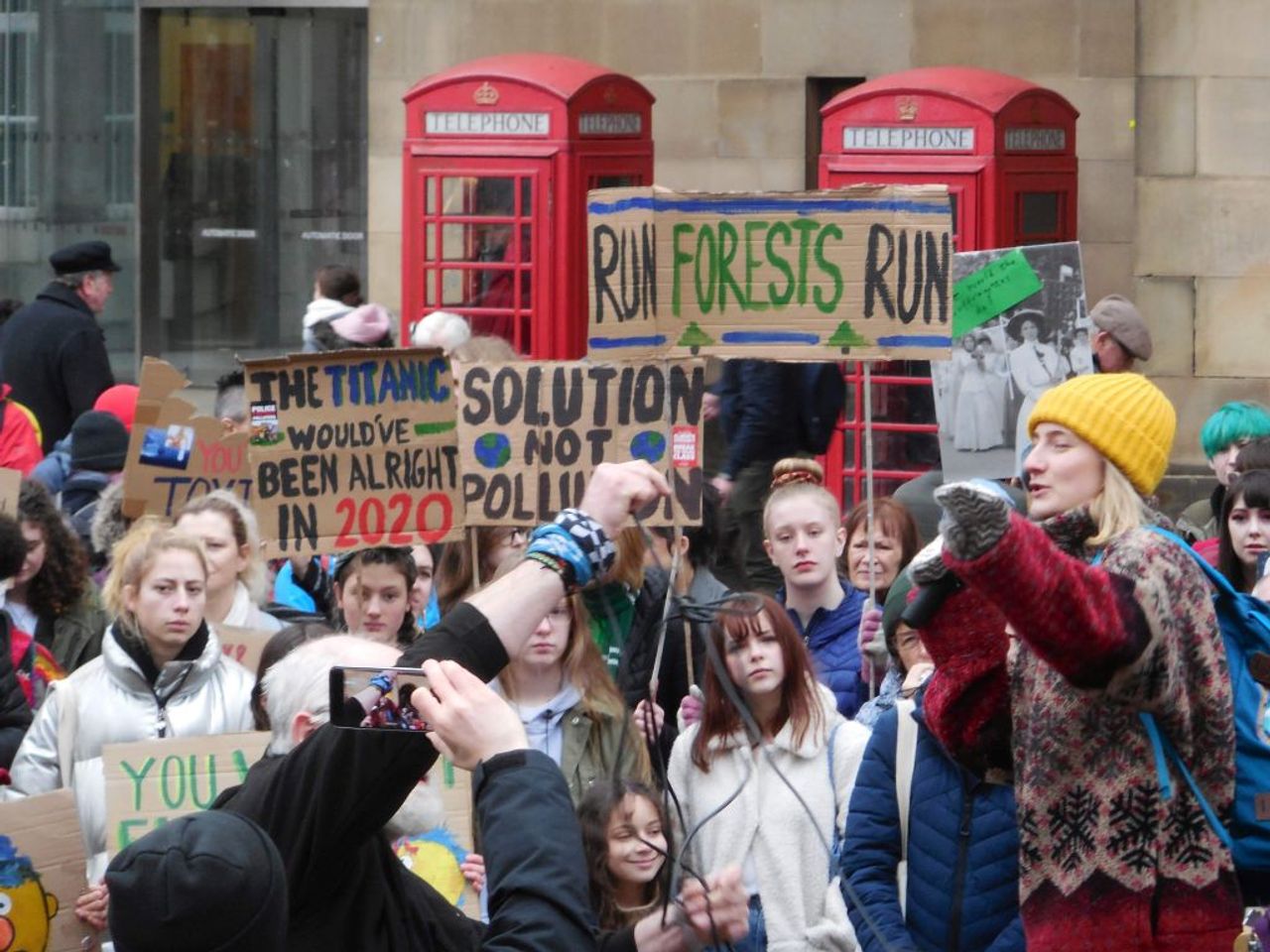 “Governments are putting profits before people”

On the first anniversary of climate change protests in the UK, young people again took to the streets in towns and cities across the country last Friday, joining similar protests around the globe.

Thousands participated in over 100 UK demonstrations. Some 3,000 protests were held worldwide in 150 countries.

In London’s Parliament Square, school and university students protested against the lack of government action to reverse the climate disaster. Some carried banners declaring: “Roses are red, violets are blue, our Earth is burning and soon we will too” and “Planet over Profits”.

The protests stretched the length and breadth of the country, including Scotland’s largest city, Glasgow. In Aberdeen, students staged a “die-in” outside the university library.

In the South-West, there were demonstrations in Plymouth and Bristol, as well as in smaller towns such as Bideford and Barnstaple. In Stroud, the protest led to delays on the busy A419 motorway.

In Cambridge, those protesting wore red and orange to symbolise the Australian fires as they listened to music and speeches outside King’s College. Hundreds demonstrated in Oxford.

In Yorkshire, the climate change protest in Leeds shut down several roads as over 300, including many school students, marched through the city centre. A similar number gathered in Sheffield.

Environmental organisations such as Friends of the Earth, Greenpeace and Extinction Rebellion, as well as the Green party, were present at many of the demonstrations. A handful of trade union banners could be seen. … 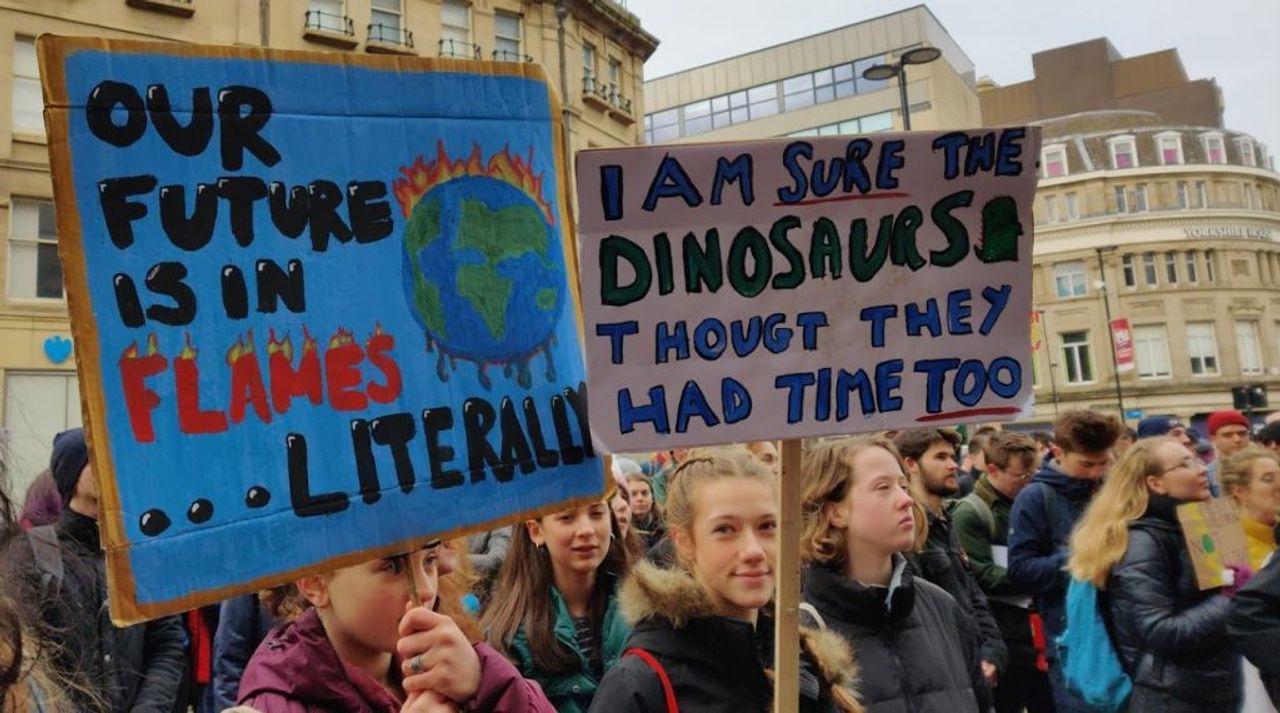 At Friday’s protests, Socialist Equality Party campaigners explained that these sentiments can only be taken forward through a turn to the working class, which is entering into major social and political struggles on a world scale. A socialist and international programme, aimed at reorganising world society to meet human need, not private profit, was the only way to resolve the mounting ecological catastrophe.

In Sheffield, World Socialist Web Site reporters spoke to Harris, a year-nine student, who said the reason governments had not listened to previous rallies was “pure greed, putting profits before people, as is the nature of capitalism. They don’t give a f**k about our voices, just money and big business. So they can live well, while the working people suffer.” 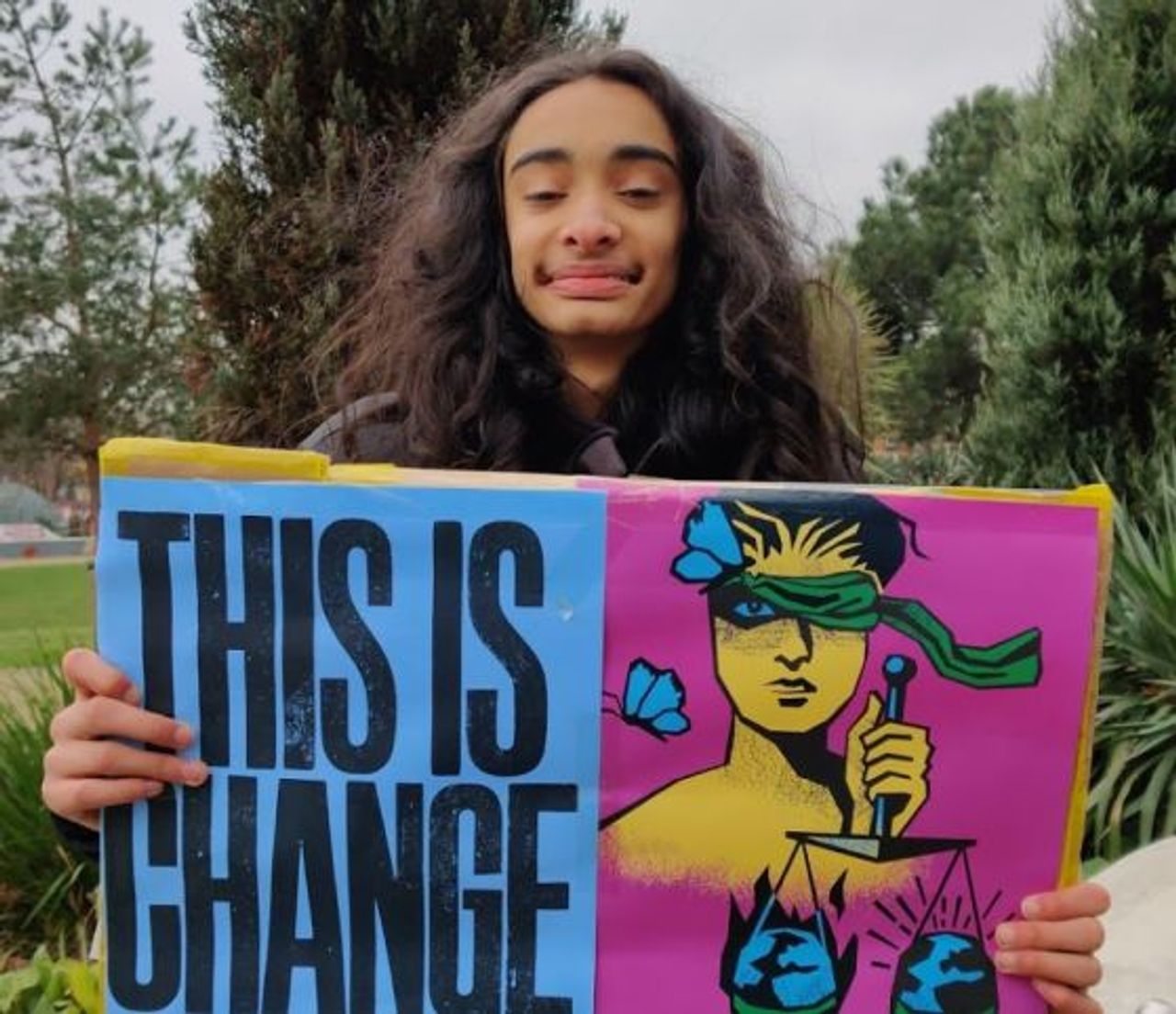 Harris said the massive growth of social inequality was “absolutely awful, and that is another reason I have come to the protest. After climate change, with mass migration, there will be more class divisions, as people migrate in search of what they call ‘first world’ countries. Immigrants are already being attacked. That’s disgusting. And the attacks are just going to get worse as more come as a result of mass migration.

“Capitalism makes people in Africa work for less than one pence a day. There are children in China drinking water that is 2,400 above the WHO recommended level of lead pollution because of e-waste generated by capitalist factories. I’m sure people don’t want this. If the people had control over business, I’m sure we could make it more ethical and meet our demands.”

Harris said he “definitely prefers socialism to capitalism,” because the “companies wouldn’t be owned by private owners, and would be controlled by the people, through citizens’ assemblies. That’s much more democratic. If the companies were owned by the people, it would give everyone a much more equal chance to earn money and have their voices heard.”

WSWS reporters asked Harris about imprisoned WikiLeaks publisher Julian Assange, who is the subject of British court hearings beginning on February 24, for his extradition to the US. Harris, like many young people, was initially unaware of Assange’s plight. When our correspondents explained that he was being persecuted for exposing US war crimes and global diplomatic intrigues, however, the student stated that it was “absolutely disgusting. We have the right to freedom of information. Just being put in jail for having your own opinion is like what Hitler did to the communists under the Nazis, he killed them or he locked them up. Are we going back to those times? I thought we had learnt from that.” 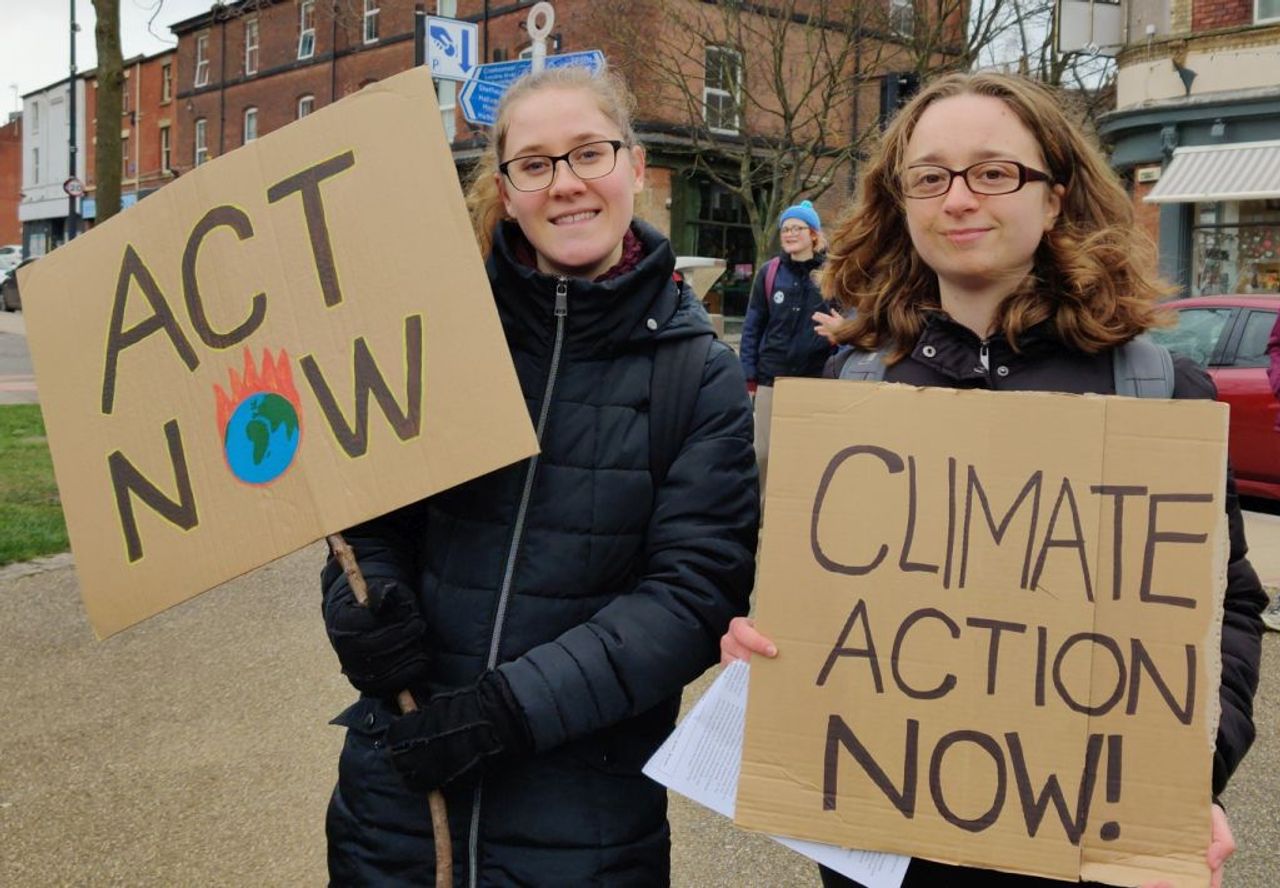 Jess, who recently graduated university in ecology and conservation biology, said urgent action on climate change was needed. “The government is not doing enough. We are trying to make our voices heard, because at the end of the day it is our futures that are being affected. We might not have a future.”

Her degree had a big focus on climate change and examined the politics of it. She had drawn the conclusion that “It’s not a country issue, it’s a global issue. The oil industry is very lucrative. They don’t want to give that up.”

High school student Sienna said climate change affected everyone’s future: “We are young, and there are only a few more years to deal with it. Nothing much has been done by large organisations. It’s mainly money issues why governments haven’t really done anything. They represent big business, definitely.”

“I’m not a big fan of any of the parties. There are very few politicians who would act against it because the money is really important to them.”

Second-year medical student Jamie said climate change was creating a lot of health problems, “which is why med students should also take notice of the climate crisis.” 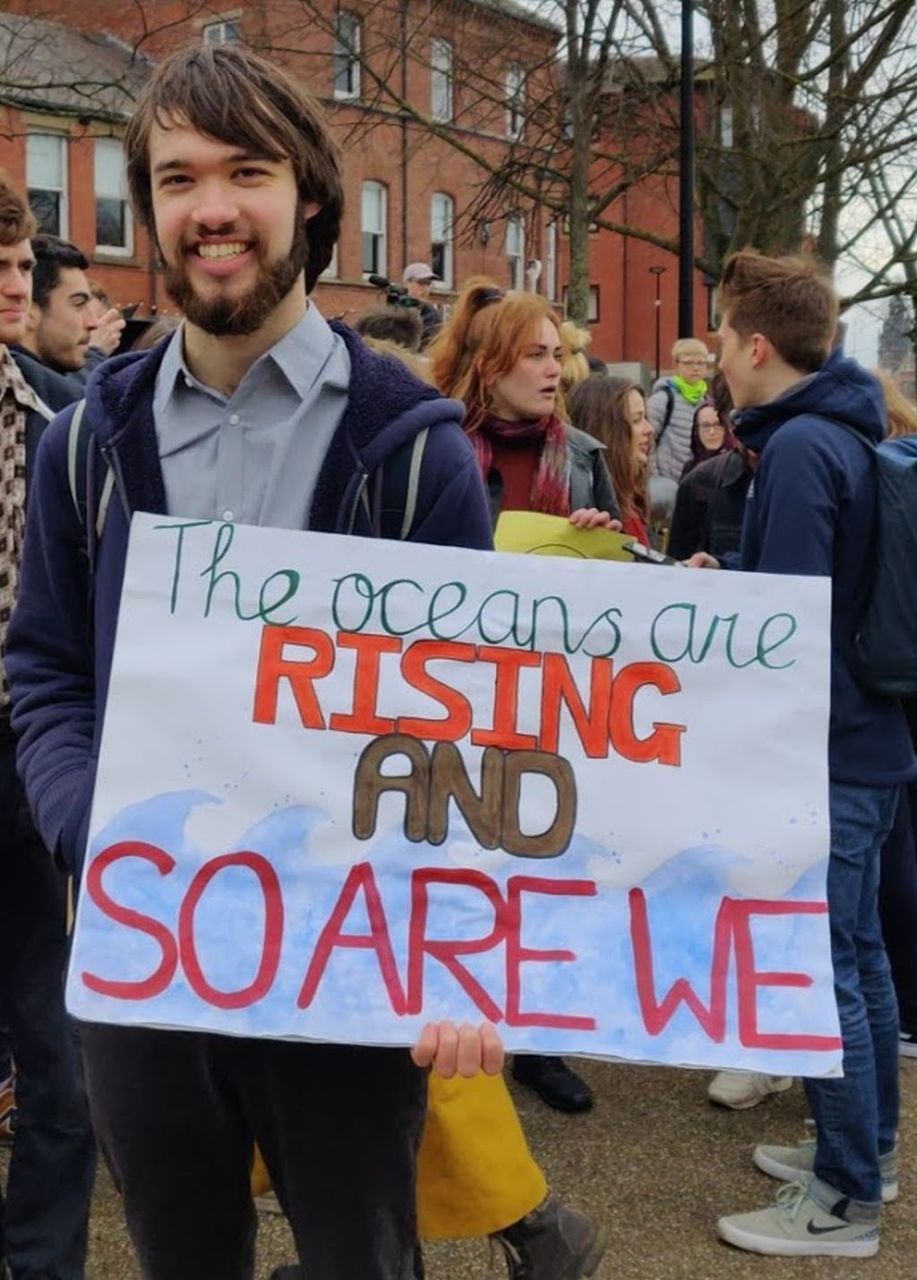 “At the moment, it might not seem like much, but it will soon become completely irreversible. It’s probably the biggest issues we have confronted since the world wars.

“There are a lot more deaths due to heat exhaustion, diarrheal diseases in Africa and Asia, places that already have quite high death rates from these things. But they are increasing as the temperature is rising and making better conditions for all the microorganisms that cause these things. All those diseases we thought we might just be getting a cap on, they are all soaring up again. Malaria is definitely on the rise.”

Jamie agreed that the system of rival nations stood in the way of a global response to threats such as climate change and the present coronavirus crisis. Speaking of the epidemic, he said: “It started out just in China but the rest of the world did not pay attention until it started spreading all around the globe. That is just ridiculous. When something starts being that big in one country, everyone needs to pay attention immediately to stop the further spread.

“It’s not the Chinese government’s fault. If they don’t have the infrastructure in place to control the spread of diseases like that, then other countries which do should help them. The US and UK should have sent aid to prevent an epidemic turning into a pandemic.

“It hasn’t happened because the governments of the world all want power for themselves, so they are not happy sharing and helping others, especially the big powers like the US and UK.

“Governments should be for the people, not for big business. Instead of helping the people they are just helping themselves.”

In Manchester, WSWS reporters spoke to Emmanuel, a 21-year-old music student, who said, “We need change and it’s not going to come from the government. “The interests of the corporations don’t lie with the environment but, if you put it in simple terms, money. My sister told me China is investing billions in alternatives to fossil fuels, but the oil companies cancel it out. As individuals we can do our best. Solidarity is good. We can become a vegan, we can stop flying, but it’s got to be a top-down thing.”

Mark, an artist from nearby Liverpool, told the WSWS: “There’s real anxiety with the youngsters and the adults about the future. You can sit in your house and get upset and just think about doom, but this protest shows the positive of everyone coming together. It needs the people who make the decisions to listen.

“When it comes to politics and elections, you vote for one side and you vote for the other side but there’s the same puppet master pulling the strings. I one hundred percent agree that the wealth needs to be taken out of the hands of the minority, by the people on the ground. … We need to look in a different direction.

“My answer to climate change would be an outright revolution, not through parliament.”