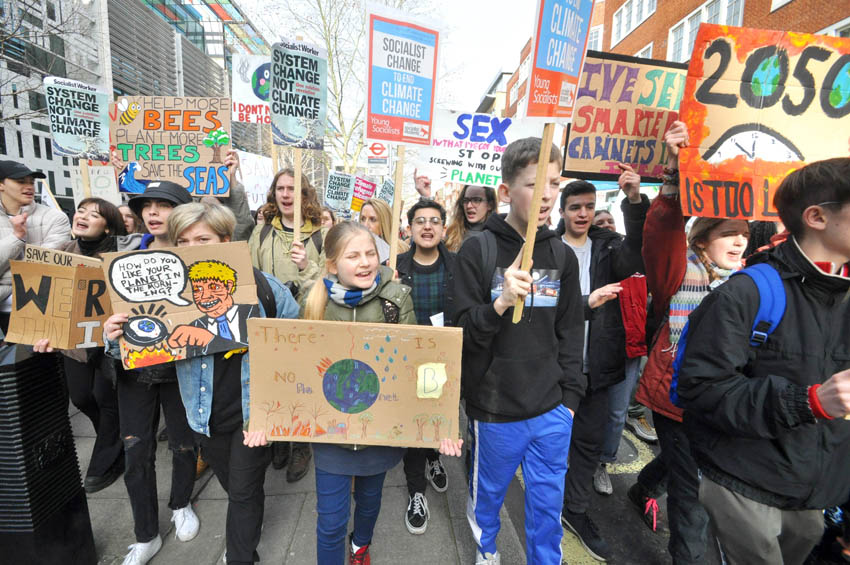 A THOUSAND school youth walked out of classes yesterday to join the mass protest in Parliament Square, furious at how capitalism is destroying the environment, as part of a global youth strike with young people coming out in countries around the world.

Around the UK, school students came out, with a mass march through Brighton. There were over 1,200 youth with home-made placards and whistles and drums.

In London, the masses assembled in Parliament Square, before marching around central London to Downing Street.

School youth Katie came with her friend from Reading and told News Line: ‘We need to get rid of capitalism. It’s like it’s one step forward, three steps back.’

‘The climate crisis is creating a crisis for capitalism.

‘We need a change of government because workers are under attack with zero-hours contracts and anti-strike laws.

‘We need a socialist government.’

Student Joey Butcher said: ‘The government’s proposals to cut carbon emissions by 2050 is just not enough.

‘They allow the big corporations to get away with avoiding paying tax. That money should be used for the public good.’

17-year-old Eva Battson said: ‘It’s no good just worrying about the situation. We have to make a revolution to change things.’

Another school youth, Louisa Smith from Hertfordshire, said: ‘I’m here because it’s our future that is being decided.

‘It’s necessary to stand up for what we believe because the people in power don’t seem to care about it.’

12-year-old Eratze Peel brought her mum after her schoolfriends dropped out and said: ‘I have written a play about climate change and Greta Thunberg.

‘When she was my age she was depressed about what was happening to the planet, so she decided she had to do the job of adults.’

King’s College university student Ciara Connolly said: ‘I’m angry that the government is more worried about their economy and don’t see that climate change will affect people’s lives in the future. We have to change the system.’