This February 2015 video from the USA says about itself:

Ed Schultz continues his investigation into the Deepwater Horizon oil spill five years on, as it continues to wreak havoc on the Gulf Coast.

The Deepwater Horizon oil spill spread much farther than once thought

Nearly a decade after the Deepwater Horizon oil spill in the Gulf of Mexico, computer simulations suggest that the toxic pollution extended much farther than satellite images first indicated.

Those images, taken after the spill dumped nearly 800 million liters of oil into Gulf waters, helped to determine which areas would be temporarily closed for fishing (SN: 4/3/15). Scientists’ observations since then had suggested that the oil had spread farther (SN: 7/31/14).

The new analysis confirms that fact with computer simulations, which considered ocean currents, oil evaporation and other factors to map the spill’s true expanse. Satellites appear to have overlooked at least 30 percent of the hazardous pollution, says biological oceanographer Claire Paris-Limouzy of the University of Miami.

The simulations uncovered vast ocean swaths where oil concentrations were high enough to endanger marine life, but dilute enough to have been overlooked by satellites, Paris-Limouzy and colleagues report online February 12 in Science Advances.  Water and sediment samples from around the Gulf supported the findings. 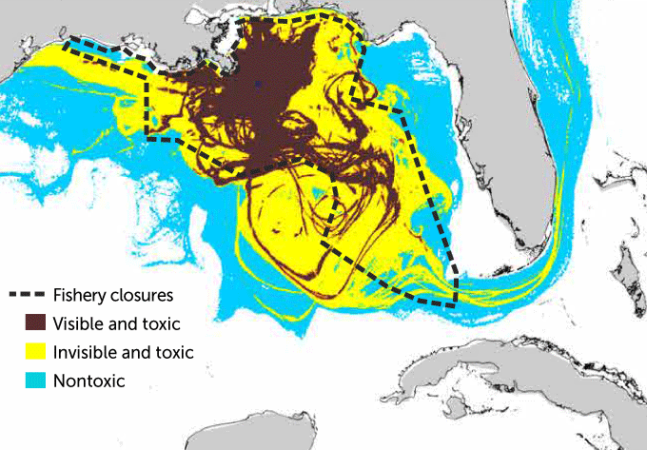 In the immediate aftermath of the Deepwater Horizon spill, satellite observations that could detect high oil concentrations (brown) helped determine where to close fisheries in the Gulf of Mexico (black dashed line). But computer simulations of the spill indicate that lower oil concentrations invisible to satellites but still toxic to marine creatures (yellow) crept outside the boundaries of the fishery closures. Meanwhile, even lower, nontoxic levels of oil pollution (blue) spread even more widely.

Satellite images had shown oil mostly in a northern and central patch of the Gulf. But the simulations suggest toxic levels of oil pollution cast a much wider stain on the ocean. Fishery closures covered about 94 percent of the polluted region observed by satellites, but only about 70 percent of the hazardous area identified by the new analysis — missing spots near Texas and Florida. Some of those waters remained closed to fishing for years.

AN AUSTRALIAN BP refinery worker who was fired for allegedly comparing his employers to Hitler successfully won back his job today: here.

3 thoughts on “BP oil spill, worse than once thought”