Hundreds of Amazon employees defied corporate policy to publicly criticize the company for failing to meet its “moral responsibility” in the climate crisis.

More than 350 Amazon employees defied an external communications directive and spoke out publicly on Sunday both against corporate policies and in defense of fellow workers who had previously criticized the company’s climate practices.

The comments of the Amazon employees have been published on Medium, the social journalism and online publishing platform. As of this writing, 363 comments have been posted by Amazon staff from departments across the company. Further comments can also be read at the Twitter hashtag #AMZNSpeakOut. 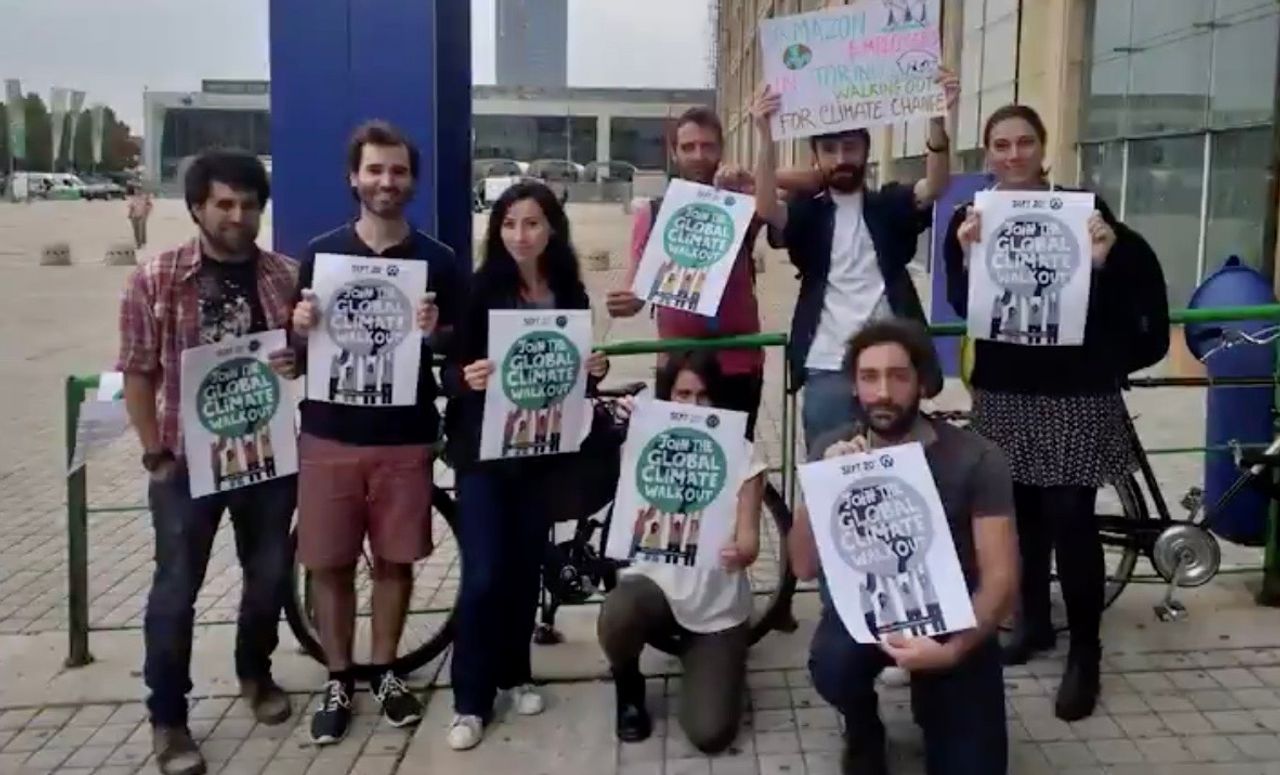 This photo shows Amazon workers in Turin, Italy participating in the climate strike on September 20, 2019.

The employee statements criticize a wide range of corporate policies and practices including Amazon’s collaboration with the fossil fuel industry, discrimination in the workplace, the mistreatment of warehouse workers and the company’s complicity with the US Department of Homeland Security Immigration and Customs Enforcement (ICE).

The organized defiance of Amazon’s recent threat against speaking publicly about company policy is a response to an appeal by a group of employees organized under the Twitter account Amazon Employees for Climate Justice. Their January 20 statement said, “You may have read the news about Amazon threatening to fire a few people for violating the newly updated external communications policy by speaking publicly about Amazon’s impact on the climate crisis.”

The group’s statement also says, “Our strength is in numbers. The idea is to intentionally break the communications policy so prolifically that it is unenforceable. As Martin Luther King Jr. said, ‘One has a moral responsibility to disobey unjust laws.’” The employees encouraged their fellow workers to sign on to Medium and endorse one of the already published statements or to write their own. They said they would not publish any of the quotes until the total number of posts reached at least 100 people.

Among the most popular endorsed statements says, “I disagree with AWS [Amazon Web Services] enabling Palantir and ICE to surveil and separate children from their parents at the border.” Another popular statement reads, “Amazon’s supply chain should not be built at the expense of warehouse workers who work at a pace that causes higher-than-industry-average injury rates. It’s not humane to have people scared to go to the bathroom.”

In a Tweet on January 27, the group published a two-minute video with numerous Amazon employees identified by their first names and holding up handwritten signs that read, “We will not be silenced #AMZNSpeakOut.” The Tweet reads, “Hundreds of us decided to stand up to our employer, Amazon. We are scared. But we decided we couldn’t live with ourselves if we let a policy silence us in the face of an issue of such moral gravity like the climate crisis.”

1/ Hundreds of us decided to stand up to our employer, Amazon. We are scared. But we decided we couldn’t live with ourselves if we let a policy silence us in the face of an issue of such moral gravity like the climate crisis. #AMZNSpeakOut pic.twitter.com/zWIKku4LF6

The present conflict at Amazon is the latest development in a series of escalating events that go back to last fall. On September 20, nearly 5,000 Amazon employees in 25 cities and 14 countries walked off the job to protest the company’s inaction on climate change. The strike included 3,000 workers who walked out at the company’s Seattle headquarters, and was part of the week-long Global Climate Strike that involved 4 million people worldwide.

The day before the protests took place, billionaire Amazon CEO Jeff Bezos made an announcement in Washington DC—alongside former UN climate chief Christiana Figueres—that he was the first signatory of the newly created “Climate Pledge”, a pact that commits Amazon to meet the goals of the Paris climate agreement ten years early.

Responding to Bezos’ preemptive public relations initiative, the group Amazon Employees for Climate Justice demanded that Amazon set more aggressive targets and called for the company to be carbon neutral by 2030. The group also demanded that Amazon end its web services contracts that help energy companies accelerate hydrocarbon extraction and stop funding politicians and lobbyists who are climate deniers.

Amazon is a massive consumer of electrical energy at its cloud computing centers and has a significant carbon footprint, delivering an estimated one billion packages to consumers each year in the US alone. Meanwhile, it has been reported by the New York Times that Amazon has contributed financially to the Competitive Enterprise Institute, a Washington DC think-tank that disputes the dangers of climate change on behalf of the fossil fuel industry.

In response to both the walkout and the demands of the employee activists—as well as widespread skepticism about Bezos’ commitment to the environment or issues related employee working conditions or its development of facial recognition software for police surveillance—the company issued a policy manifesto on October 10.

In an article in the Bezos-owned Washington Post reporting on the manifesto, the Amazon Employees for Climate Justice was quoted as saying, “Amazon’s position is based on false premises and distracts from the fact that Amazon wants to profit in businesses that are directly contributing to climate catastrophe.” The Post article attributed the statement to two employees by name, Jamie Kowalski, an Amazon software development engineer, and Maren Costa, a principal user-experience designer.

On January 2, the Post reported that Kowalski and Costa had both received a letter from a company lawyer in the employee relations department that accused them “of violating the company’s external communications policy”. Costa, the Post report said, also received an email that warned that future violations of the company policy could “result in formal corrective action, up to and including termination of your employment with Amazon.”

In an email to the Post, Costa wrote that she spoke up originally “because I’m terrified by the harm the climate crisis is already causing, and I fear for my children’s future.” She also wrote, “It’s our moral responsibility to speak up—regardless of Amazon’s attempt to censor us—especially when climate poses such an unprecedented threat to humanity.”

The latest confrontation between Amazon employees and the company is part of a growing wave of opposition among tech workers to the policies and practices of the giant tech monopolies. In June 2018, Google announced it would not seek to extend its contract with the US military on the Project Maven artificial intelligence initiative, after thousands of employees signed an open letter denouncing the company’s participation in “the business of war”.

Employees at Google, Amazon and Microsoft have all spoken out against the development at their respective companies of facial recognition software for police and military purposes.

The fact that Amazon employees are now drawing together demands on climate change, the company’s participation in illegal attacks on immigrants and the use of artificial intelligence by the police and military, and calling for a change in the working conditions of the super-exploited warehouse workers, is an important development.

What is needed to move the struggle forward is a recognition that all of these issues are important aspects of the unified struggle of the working class internationally against capitalism. Tech workers need a global strategy—in cooperation with workers in other sectors of the economy—based on a socialist program that will remove the critical resources of the internet, digital communications and logistics infrastructure for consumer product distribution from private ownership and place them under the democratic control of the working class.