This November 2018 video says about itself:

Trump wants Iraq to pay for the US invasion with oil

Donald Trump urged the Iraqi prime minister to compensate for the 2003 US invasion of Iraq with oil, according to Axios.

Iraq’s caretaker Prime Minister Adel Abdul Mahdi ordered a brutal crackdown on peaceful mass demonstrations that erupted on Friday. Protesters chanted “get out, get out, occupier”, and called for the immediate withdrawal of US troops from the country.

For the last three days, security forces have fired teargas and live ammunition, killing at least 12 people and wounding dozens more in the capital, Baghdad, and in the southern cities of Basra, Nasariyah, Dhi Qar and Diwaniya, in a bid to disperse the protests. 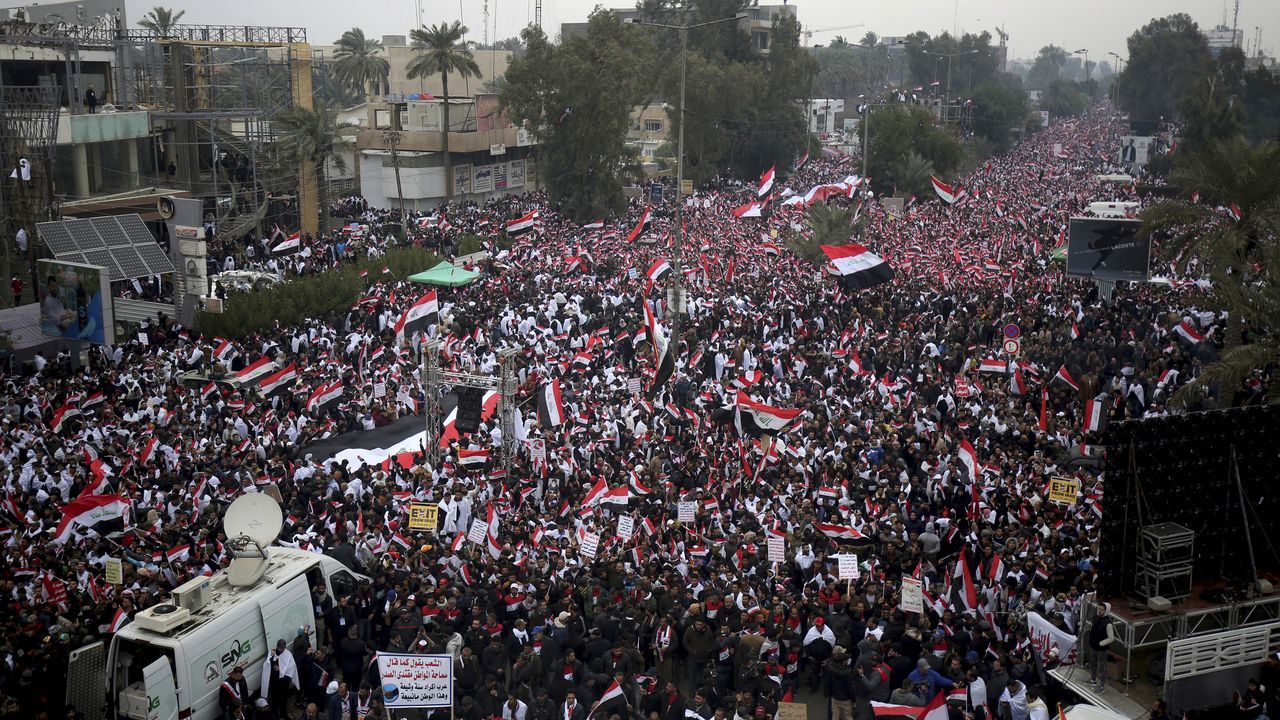 According to the Iraqi High Commission for Human Rights, more than 500 people have been killed since the protests began on October 1 with several rights groups accusing security forces of using excessive force. There have been reports of kidnappings, torture, snipers on rooftops and armed gunmen in drive-by shooting of protesters.

The protests, sparked by unemployment, particularly among young people, the lack of electricity and water, poor services and rampant corruption, rapidly escalated, with calls for the government to resign, a new prime minister independent of the main political blocs, fresh elections, an end to the sectarian-based political system and the prosecution of those implicated in corruption and the killing of protesters.

While the protests have mainly taken place in Baghdad and nine predominantly Shia provinces, they have generally been supported by Sunni Iraqis. Most of the Sunni politicians, however, have remained silent over the protests.

Although Abdul Mahdi resigned last month, he remains in office until a new prime minister is appointed. Candidates nominated by the government have been rejected by the protesters as being too close to the old corrupt setup. …

Al-Sadr has millions of supporters in Baghdad’s poorest neighbourhoods and the south and heads the largest political bloc in Iraq’s parliament, which holds several ministerial posts. Al-Sadr, who has long sought to balance between Washington and Tehran, has found it increasingly difficult to contain his supporters’ hostility to the corrupt politicians that have ruled the country since the US-led invasion of Iraq in 2003. …

Anger was fuelled by Iraqi President Barham Salih’s meeting with US President Donald Trump at Davos last week, a clear sign that Salih wants US troops to stay in the country. This flew in the face of a parliamentary vote taken in response to mass pressure for the expulsion of all US forces from Iraq in the wake of the US drone missile assassination of Iran’s General Qassem Suleimani, along with Abu Mahdi al-Muhandis, a prominent member of the Iraqi government and leader of the Popular Mobilization Forces, the umbrella group of predominantly Shia militias funded by the Iraqi government.

The US murder of Suleimani, who had been invited to Baghdad by Abdul Mahdi to discuss attempts to ease regional tensions between Iran and Saudi Arabia, and al-Muhandis, together with eight other Iraqis and Iranians, at Baghdad’s international airport on January 3 was an unprovoked act of war against Iran and Iraq. It provoked furious opposition from the Iraqi people across the sectarian divide to any outside interference in Iraq—whether by the US, Iran, Israel or Saudi Arabia. …

Trump … has made clear that should Iraq insist on the US leaving Iraq, then Washington will impose punishing sanctions. …

Within hours, riot police tried to storm protest camps set up across the capital and in the south, removing concrete barriers near Tahrir Square where anti-government demonstrators have camped out for months, and used tear gas and live ammunition to disperse the activists.

This served to fuel the protests, with thousands of university and school students taking to the streets in Baghdad, Basra and Nasariyah.