Ruptly is live from Paris on Friday, January 24, as French unions including CGT and FSU call for a strike and a march through the French capital to demonstrate against French President Emmanuel Macron’s proposed pension plan.

The nationwide strike, which started in early December, is one of the biggest to hit the country in years and has been affecting rail, road and air transportation.

The march will mark the 50th day since the beginning of the strike and the seventh nationwide, inter-union protest.

Hundreds of thousands of strikers, “yellow vest” protesters and youth marched Friday in protests across France against President Emmanuel Macron’s pension cuts, after Macron presented the pension bill to his council of ministers to prepare its passage at the National Assembly next month. It came after rail and transport workers ended a six-week strike against the bill, which would allow the French state to slash pensions over the coming years and decades. 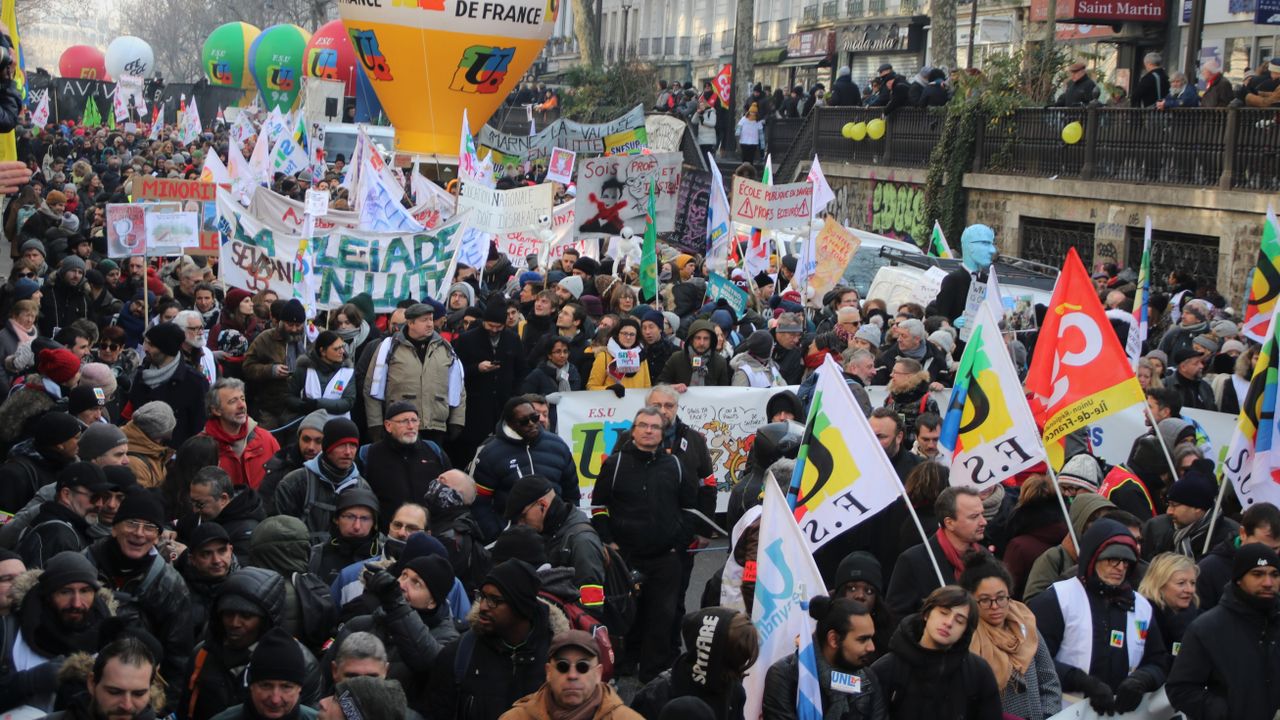 An overwhelming majority of workers opposes the cuts and opposes Macron, a former investment banker nicknamed the “president of the rich”. An Elabe poll this week found 61 percent opposition to the pension cuts, and that 82 percent of French people believe they are personally worse off since Macron took office in 2017. Nonetheless, Macron intends to submit the cuts to the National Assembly, where his party has a majority, on February 17.

All accounts agreed that the number of protesters had risen since the last national protest on January 16. Nevertheless, police and the … General Confederation of Labor (CGT) union gave wildly different figures for the number of protesters nationwide, ranging from 239,000 to 1.3 million. With the largest march in Paris, tens of thousands marched in Marseille, Toulouse, Bordeaux, Le Havre, and Lyon, and large protests took place in Nice, Rouen, Nantes, Clermont-Ferrand as marches were held in over 200 French cities in total. 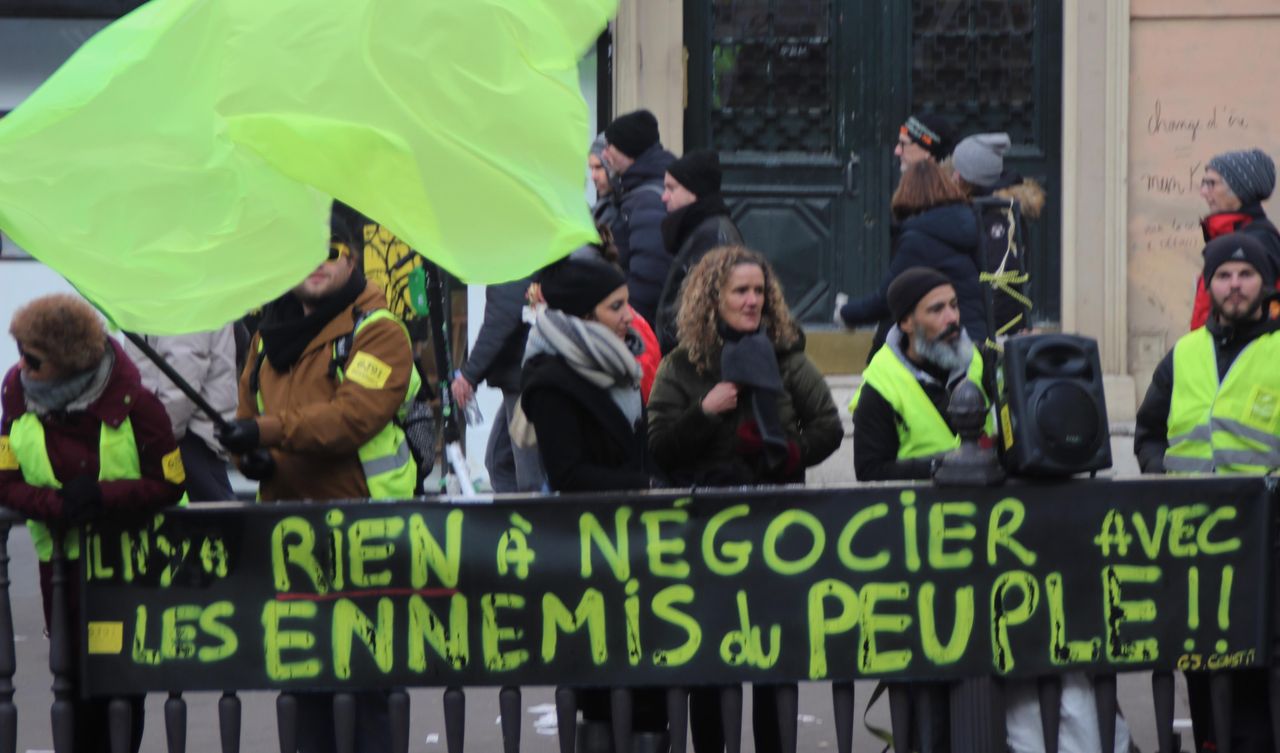 In Lyon, hundreds of members of the National Barristers Council (CNB) striking against cuts to their pensions occupied the Lyon Judicial Tribunal. Several waste treatment facilities in the Paris area also took strike action, as did the staff of the Eiffel Tower.

Political tensions are still mounting, as the government moves to ram its cuts through by force despite mounting popular anger and opposition. There is nothing to negotiate with Macron, who worked out his cuts with financial firms including multi-trillion-dollar global asset management firm BlackRock and is determined to funnel hundreds of billions of euros away from pensions to the super-rich and the military-police forces. The only way forward for the working class is a fight to bring down the Macron government. … 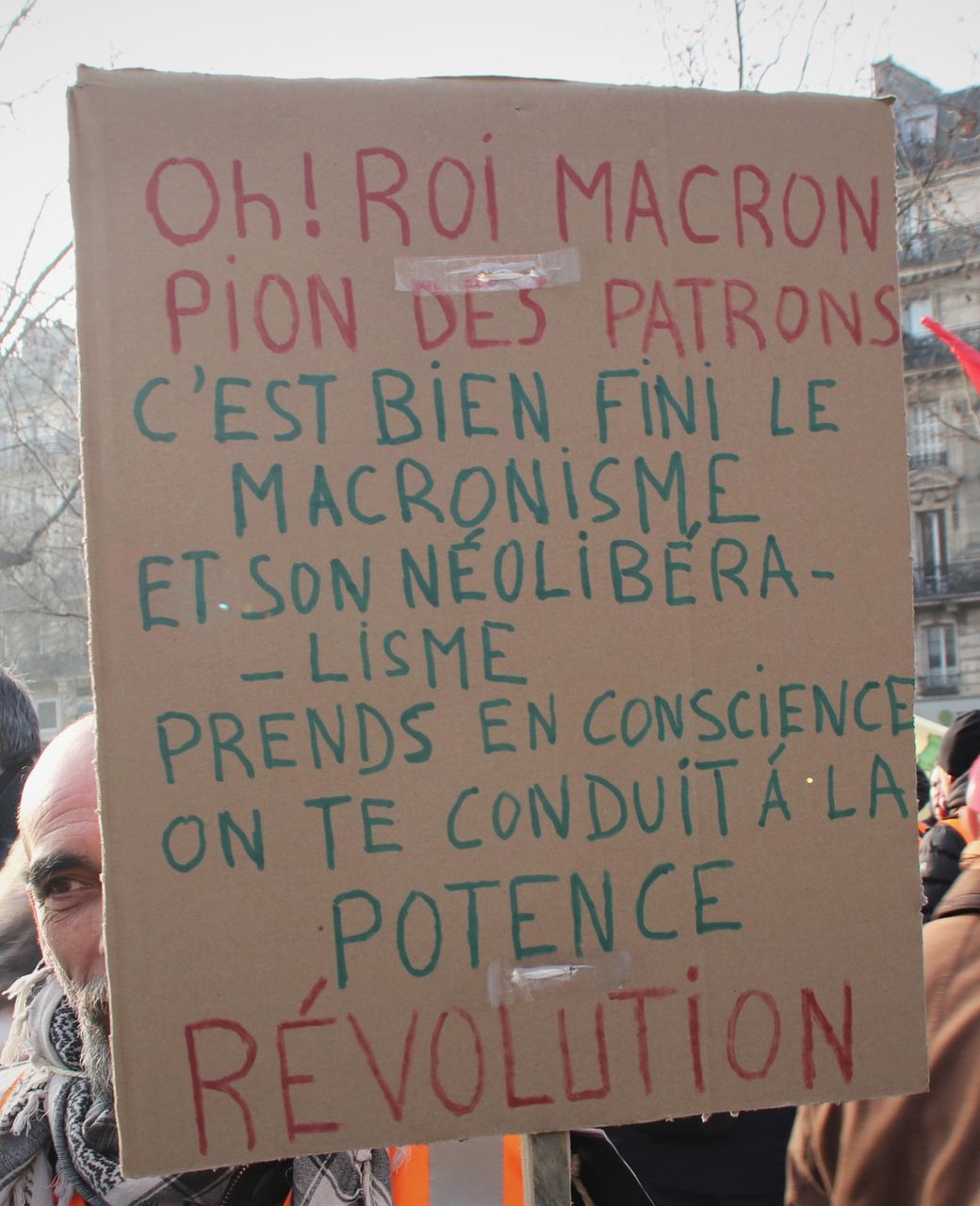 Cédric, a Paris transit worker, told the WSWS: “When we listen to the media, we see they feel there is a moment of weakness among us strikers, and we are here today to show them that is not true. Unfortunately, if we have gone back to work, it is not of our own free will; it is more that, at the end of the month, one has to eat. It is more the financial side that forced us to go back to work. But now we are trying to come together on more spontaneous actions to show our discontent.”

Frédéric, another transit worker, criticized the unions for isolating the rail workers: “If we had all gone out together on an indefinite strike, after a week or so Macron would have been defeated. But non-striking workers would have had to follow us. And, as you say, one does not know what exactly was happening in all the trade unions’ talks. That is why personally, I myself am not in a union or a union member.”

Several strikers told the WSWS that, if Macron rams the cuts through the National Assembly, they would continue to strike and protest. “It is not just because today Macron decides to impose his so-called law with the minority that supports him that we will stop the struggle. But we’ve been on strike 50, 51 days, we are exhausted financially. That is what they wanted, clearly. But if we need to keep fighting until the end of the year, we will, maybe two days a week.” 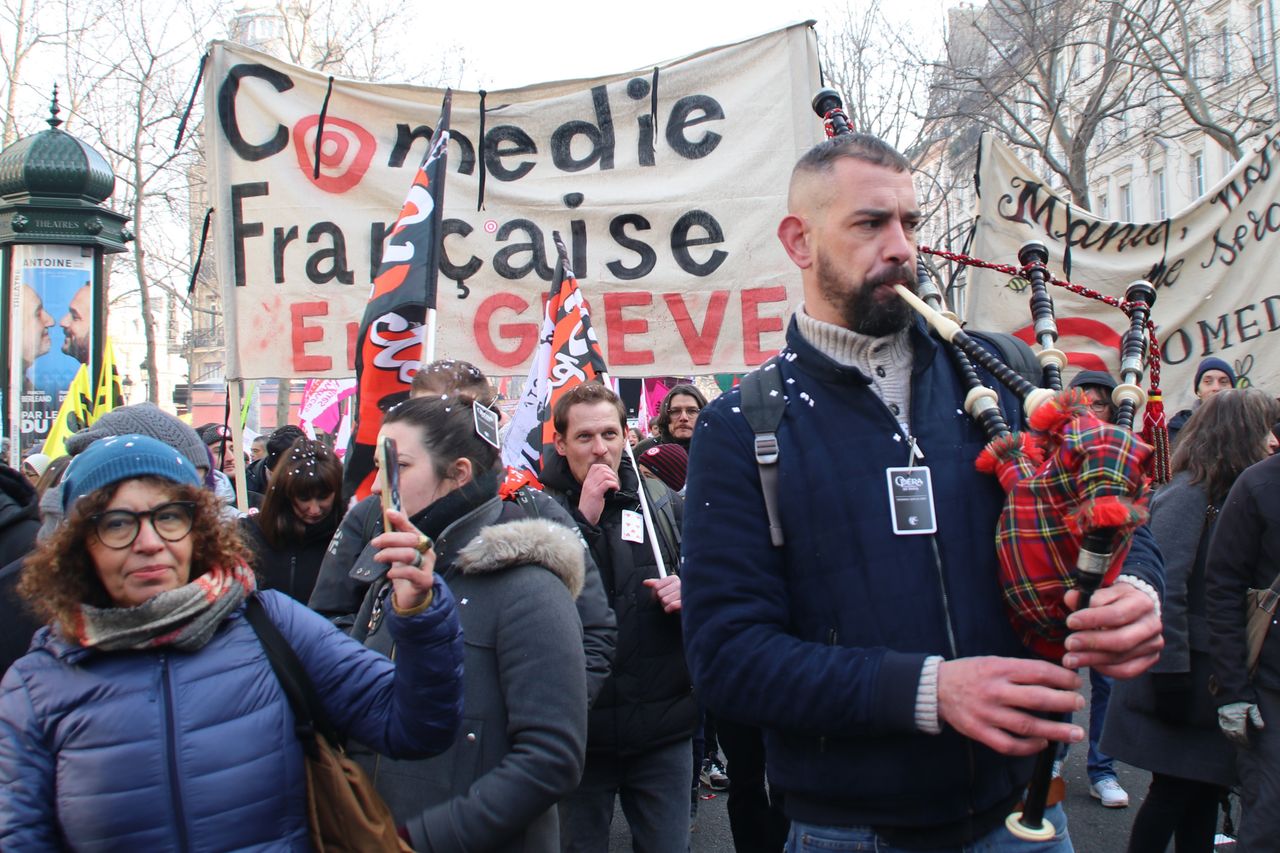 Conditions are rapidly emerging for an explosive clash between the working class and the Macron government, backed by the banks and global investors and financial markets. In such a struggle, the decisive allies of workers in France are workers around the world, mobilized against the banks. …

The decisive question is forming workers’ committees of action, … in order to mobilize broader layers of workers in a struggle to bring down Macron and to overthrow the diktat of the capitalist financial aristocracy internationally. It is ever clearer that the banks’ determination to impose draconian cuts despite overwhelming popular opposition has placed Macron and the entire ruling class on a course to dictatorship. 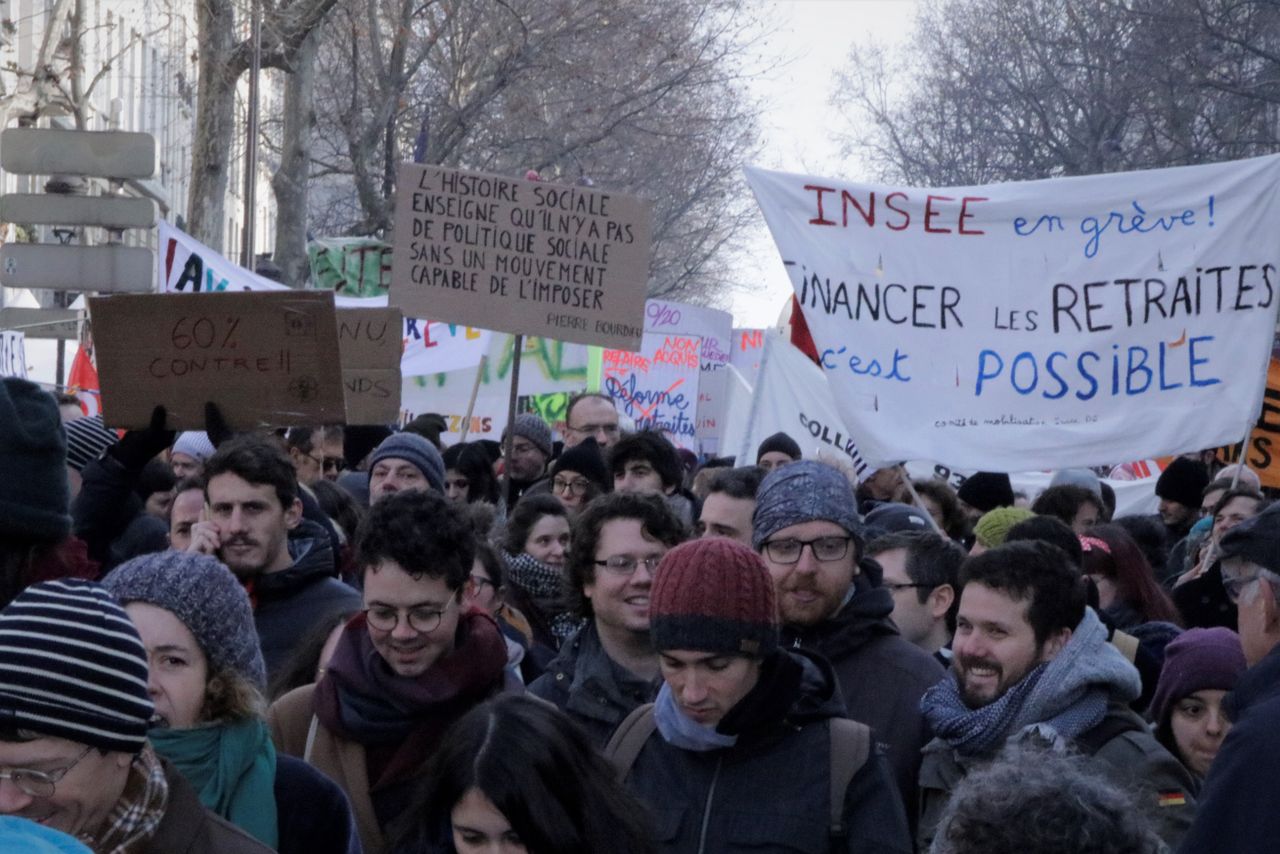 Yesterday morning, Macron launched a hysterical diatribe against those who are correctly accusing him of trampling democratic principles, by imposing a cut that will impoverish the population with blatant contempt for mass popular opposition.

“Today our society is sick with the idea, installed through sedition by political arguments that are extraordinarily guilty, that we are no longer live in a democracy, and that some type of dictatorship has been installed,” Macron said. However, he then warned that French bourgeois democracy has been badly weakened, and that dictatorship is being considered in France.

“So install a dictatorship,” he said, adding: “Dictatorships justify hatred. Dictatorships justify violence to get out of problems. But in democracies there is a fundamental principle which is respecting others, outlawing violence and fighting hatred.” He accused “all those who today in our democracy are silent on this of complicity, today and in future, of the undermining of our democracy and our Republic.” 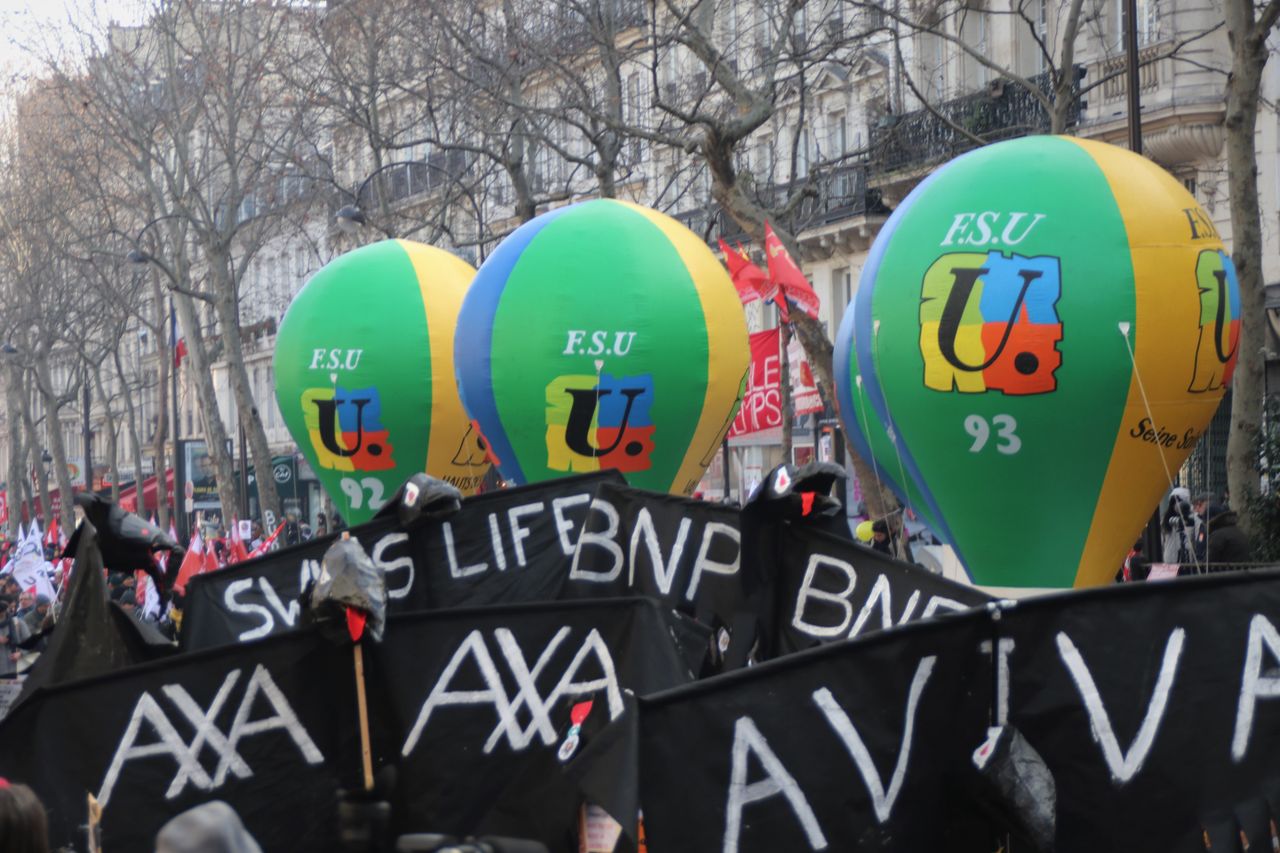 Macron’s arguments are, in fact, those of a dictator seeking to justify his reign. For all his hypocritical invocations of respect and nonviolence, he has devised his cuts not with respect but with contempt for the opinions and economic interests of the overwhelming majority of the working population. He is now trying to impoverish workers by ramming these cuts through a rubberstamp parliament and cracking down on working-class opposition.

Macron has not only had police arrest over 10,000 people in “yellow vest” protests, but decorated police units involved in the killings of Zineb Redouane and Steve Caniço, and the beating of elderly protester Geneviève Legay. He aimed to show police that deadly violence is not only tolerated, but rewarded. He underscored this in 2018 with a politically guilty call to remember France’s fascist dictator during World War II, the genocidal anti-Semite Philippe Pétain, as a “great soldier”.