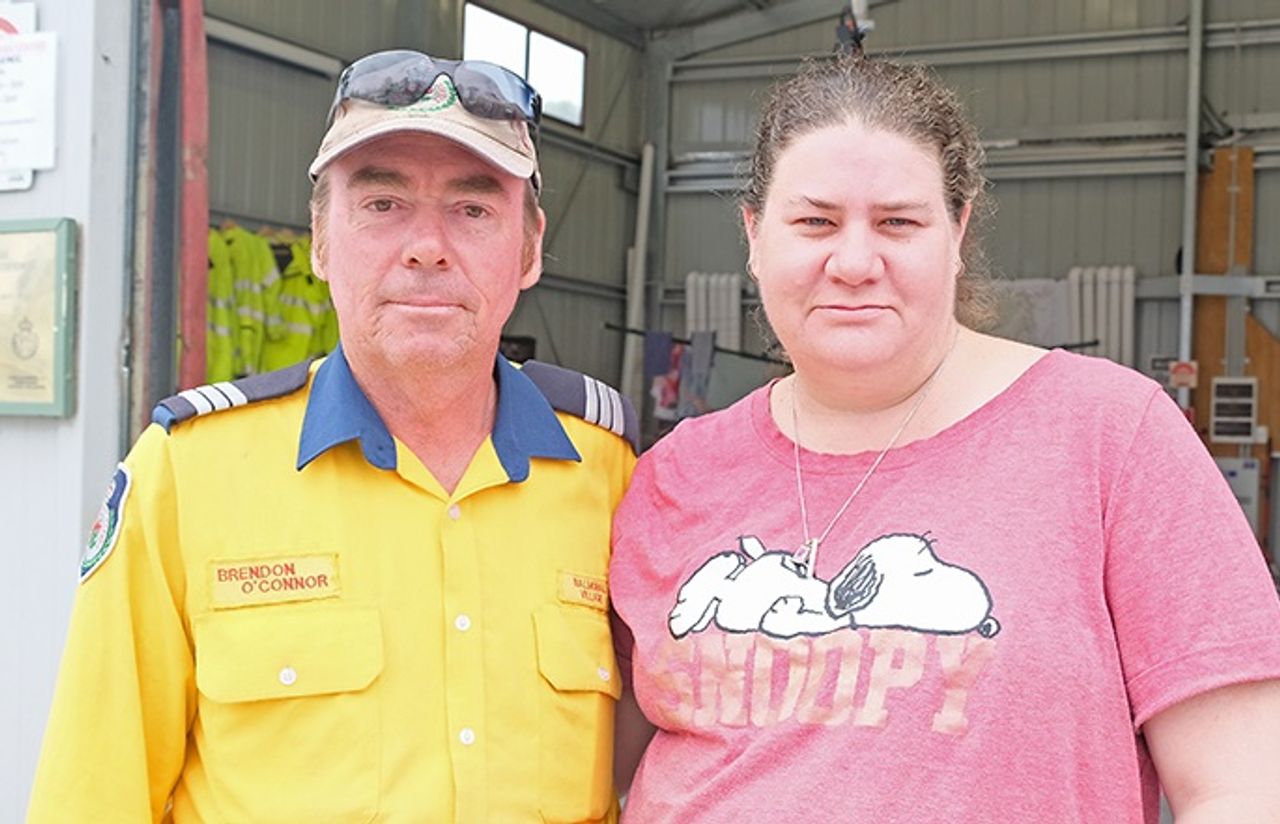 Balmoral Village Rural Fire Service (RFS) captain Brendon O’Connor told the Australian Broadcasting Corporation (ABC) this week that authorities had re-directed firefighting equipment away from the community as it came under attack from the Green Wattle Creek fire on December 21. Balmoral is in the Southern Highlands and about 100 kilometres southwest of Sydney.

The ill-equipped local RFS unit, which is entirely manned by volunteers, desperately fought to save the settlement under conditions where it is not connected to the state water supply and quickly ran out of water. Twenty-two houses or 15 percent of the village’s homes were destroyed by the fire.

“On the Thursday and Friday [December 20] we had a great number of resources, but unfortunately a decision was made on Friday evening to remove all resources from Balmoral, including bulk water, and that was replaced with a small water truck,” O’Connor told the ABC.

“We were asked to remove our own trucks from the village, which I refused to do… We were abandoned during the fight on the Saturday until much later and we’ve been abandoned since… We haven’t seen any government agency, and it’s been too hard for them to come into the village and offer assistance.”

“For the first two weeks we were on our own with no official assistance from outside,” he said, “apart from the wider community through donations of water, non-perishable foods, clothing, bedding, toiletries, which was absolutely overwhelming. We’ve had Indian, Thai, Vietnamese restaurants feeding over 150 people so it’s incredible.

“It’s been a very different [response from the authorities]. Our local council didn’t even know that we were part of this shire. They thought we had town water and didn’t know that there was fire in their shire.”

O’Connor explained that most of the water tanks, which the village relies on for its water, were now contaminated with ash and possibly asbestos. Specialised trucks are required to vacuum the tanks, which have been requested but are yet to arrive. The RFS captain described the considerable dangers posed by dead trees and said that the main road through the village was only 80 percent safe with at least 100 more trees to be felled. “It’ll be months of work cleaning up,” he added.

Asked about Prime Minister Scott Morrison’s holiday in Hawaii, he said: “None of them [government politicians] were paying attention to what was going on. Everyone dropped the ball. It didn’t bother me that Morrison went on holidays but what did bother me is that he didn’t know about that catastrophic day. He should have put his hand up and said ‘I made the mistake.’

“There needs to be a massive inquiry into what has happened and it should not be allowed to happen anywhere again. There’s been too many failings and areas that need changing.

“They [governments] are definitely not looking after us, there’s too many hidden agendas. Things are not being done to make sure we’ve got adequate power or water. It’s scary where we’re going, and it seems to be happening in lots of countries. It’s a failure to look after the people.

“We’ve got to do what’s right for us as a community, a national community, and a world community. It’s people power that should make the decisions, not a few who live in a world very unrealistic to the rest of us. We’re just political footballs in a lot of senses but without the people moving, and their voices being heard, we will be forever put down.” 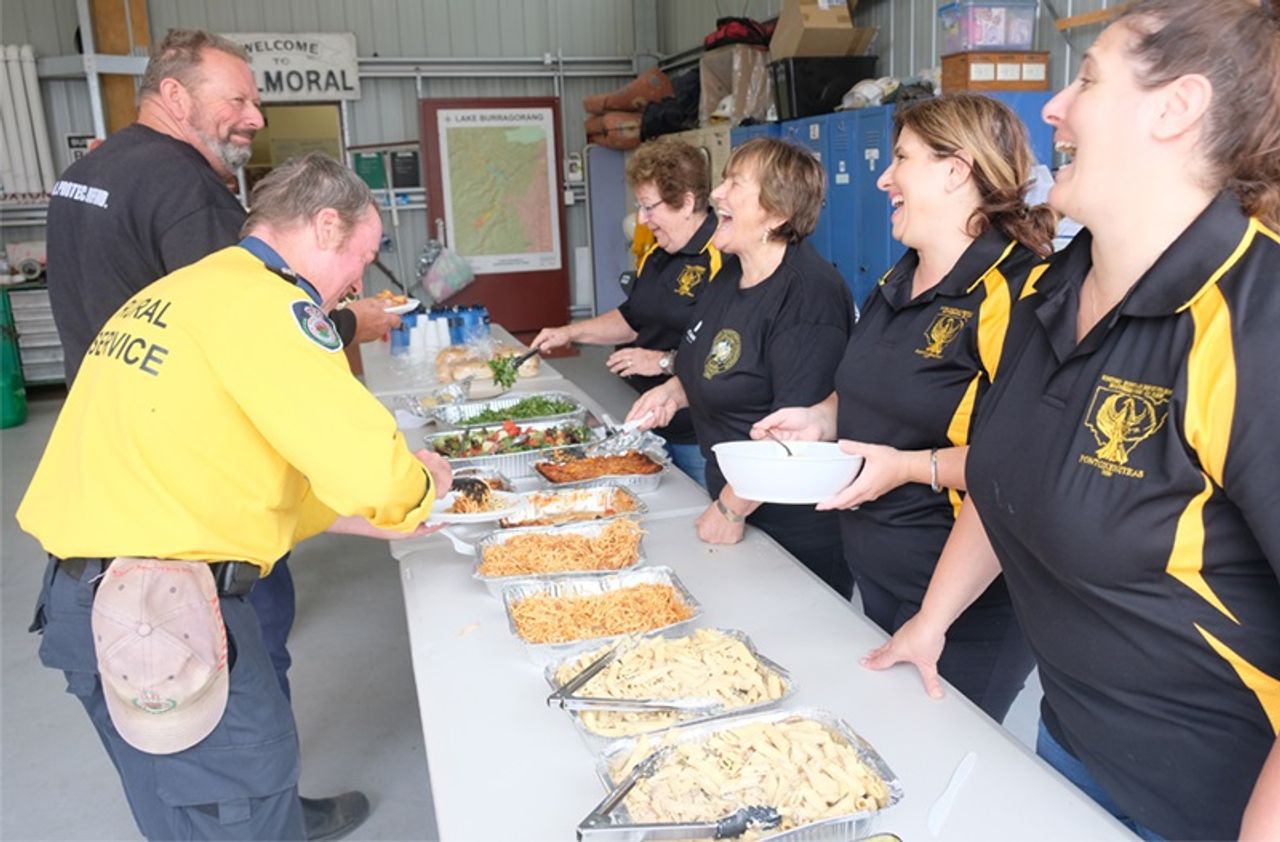 Wendy, 36, is a railway shift worker and an RFS volunteer. She had worked for 13 days at a time, on 8- to 12-hour shifts, since the Christmas period and said she was getting four or five hours of sleep and then going to Balmoral as a fire fighting volunteer.

“It’s like a blanket has been drawn over Balmoral. The village has been forgotten about. There isn’t the help that the villagers need and they don’t know who to contact or where to turn. They’re going through an emotional roller coaster because as yet there isn’t any counselling services being offered,” she said.

Asked about the millions of dollars donated to assist fire victims, Wendy replied: “The background story is that with big organisations and government agencies, the money doesn’t pass down to the little man. They’re there to assist themselves. The donations will basically go into a kitty and one percent, maybe a bit more, will actually come down to the brigades that have been out fighting or those who have been affected. They’ll be lucky if they see a cent, let alone a dollar.

“I’m disgusted by what happened here. The RFS captain was told that he and the brigade were not to stay and defend the village. What’s the point in having a rural fire service based here?

“Everybody here is a volunteer. It’s home and you do everything to protect and defend it for as long as you can, even if that means that the flames are coming in every which direction and you’re running out of water. These RFS guys are still standing, and they’ll keep doing it, and going against the wishes of the higher authorities.”

Asked about the government response to climate change, Wendy said: “Politicians are only about lining their own pockets. It’s all about making themselves look good and feeding crap to the public so they can achieve what they want, not what the people want. NSW Premier Gladys Berejiklian said Balmoral had been wiped off the face of the Earth, but we’re still here!” 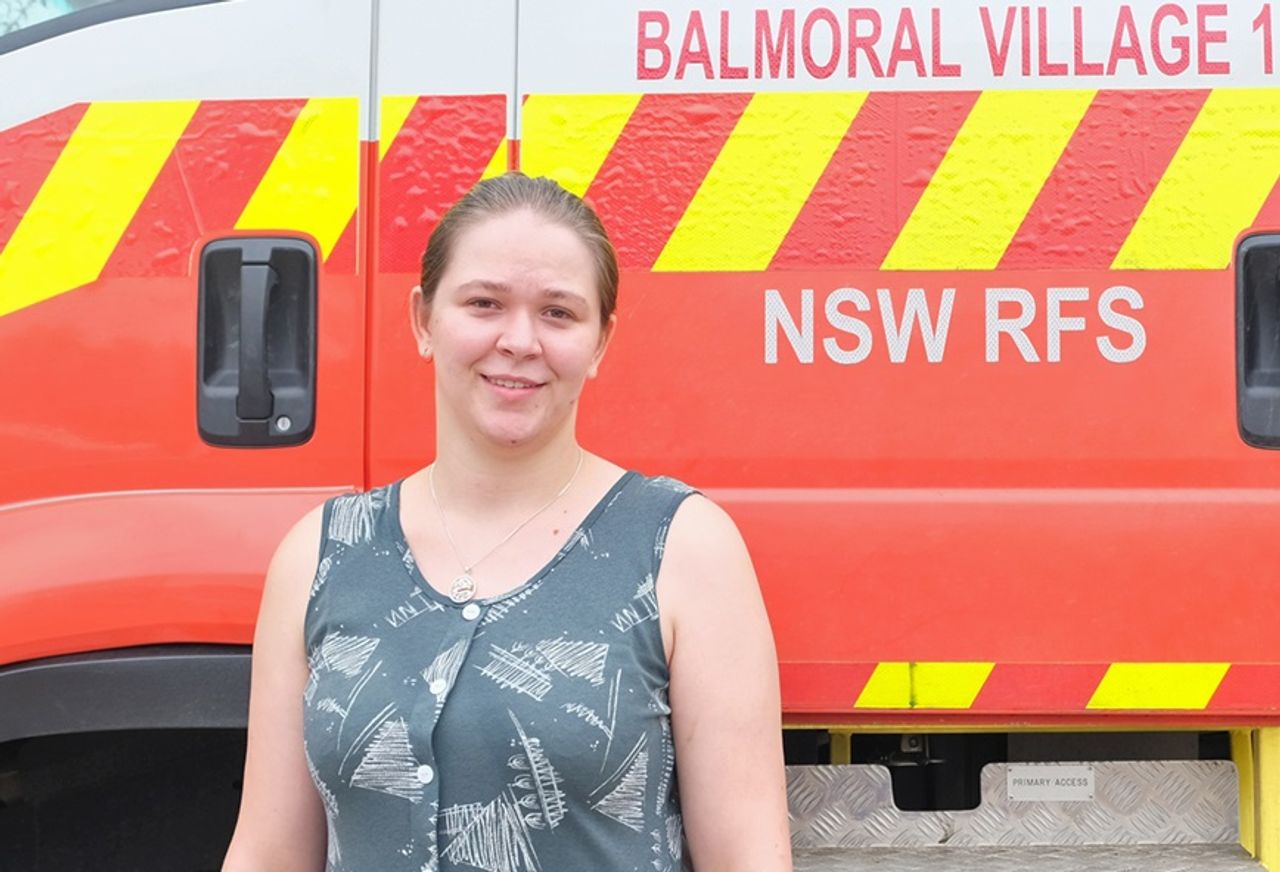 Elisa, another volunteer firefighter, said: “I’m only 24 but I’ve had a lot of experience under my belt with fires for my age. I was on property protection during the fires and helping a fellow firefighter protect his home.” She said that volunteer firefighters had little sleep. Some had not slept for over 24 hours.

“The councils don’t just allow the residents themselves to protect their own homes. We’re not allowed to clear where we think is dangerous or cut down trees. The scientists just do the numbers, but the locals mainly know what to expect, they’ve been here for many years. We need to be able to back burn more often but there’s a lot of red tape with that. Some places haven’t been burnt for 50 or 60 years, that’s probably why it was so bad.

“We need more resources and a lot more access to gear. We have our protective gear but we don’t necessarily get given new ones if they’re wrecked. You have to go down to the headquarters to sign paperwork. We should at least have two sets of boots or two sets of uniforms in case something happens. 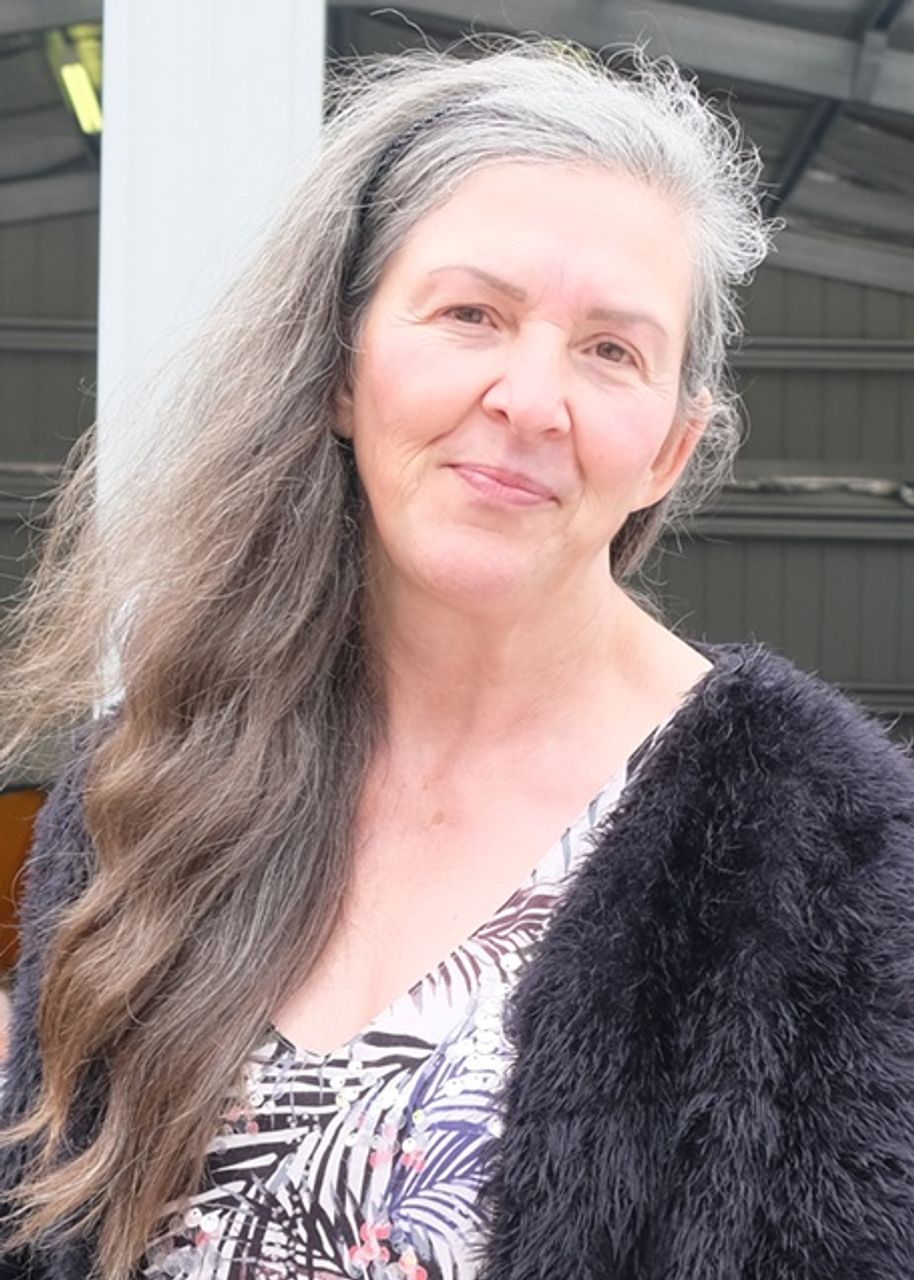 Rita, Elisa’s mother, has lived in the Balmoral area for almost nine years. “Six years ago, in 2013 we had a fire but it was nothing like this. So the warning signs were there from 2013 but RFS head office took no notice. They used a simulation to predict what was going to happen and said it’s not going to go through Balmoral.

Rita explained that “Brendon O’Connor, the fire captain, opposed the head office’s view, spoke up and basically went against protocol. He called an urgent meeting on the Tuesday afternoon before the fires. We went up to the station and he was sitting on the chair, hand on his head—a heavy burden on his shoulders. I asked ‘What can I do?’ and he said, ‘Tell people, get out and tell people’ so I went up the road and told people what was going on and that there was a fire coming.”

Referring to the government and media response, Rita said: “The media reporting is just terrible. The premier said this place had been wiped out and they just reported it. We’re the only town that doesn’t have a water supply and we ran out of water in this humongous firestorm. How can you not think about conspiracy?

“Why did Gladys Berejiklian reduce the fire budget? Why did she say Balmoral was wiped out, when she didn’t even come?”