This 11 January 2020 video from Senator Bernie Sanders in the USA says about itself:

I Will Do Everything I Can To Stop War With Iran

War is a horror. And it is time that politicians understood we must do everything we can to avoid war.

“Why should we follow these politicians who want us to kill each other for corporate profits?”

There is widespread hostility among workers and young people in the United States over the Trump administration’s provocations against Iran, which brought the world to the brink of a catastrophic war last week. Three decades of disastrous wars have produced popular skepticism to the official propaganda machine and opposition to the launching of new wars.

The decision was made to temporarily delay a full-scale war with Iran not only because the military wants more time to prepare, but also because sections of the political establishment realize they have not done enough to counter public opposition to war. An ABC News/Ipsos poll released Sunday found a majority of Americans—56 percent—disapproved of President Donald Trump’s handling of Iran and feel less safe.

A reporting team from the World Socialist Web Site spoke with Fiat Chrysler workers at Warren Truck Assembly Plant in the Detroit suburb of Warren, Michigan, late last week. They distributed a WSWS Autoworker Newsletter statement calling for opposition to the looming war with Iran and explaining the political and historical roots of US aggression against the oil-rich Middle Eastern country.

One veteran worker said, “I know a few people online in Iran, and they feel the same way. They are putting out love. They know that Americans aren’t all alike.”

Asked what she thought about the Democrats’ role in enabling Trump’s provocations, she added, “That’s what happens when you have just two parties.”

Another worker said, “It started with the Iranian Revolution. I think that our policy is driven by the military-industrial complex. They want to get control of everything. This is about economics, nothing more, nothing less.”

“It is all about oil and money,” another worker added. “The United States should not be involved in the business of other countries. We need to take care of working people here.”

Reporters asked a young temporary part-time worker whom he thought benefited from the wars. “It is the government that benefits. This is the most powerful country, but we can’t have a meeting and get something together instead of jumping into war and dropping bombs.

“It might not be the case this time, but every time we have an election, there is some kind of conflict in that region.

“We don’t need to be there. I have friends in Saudi Arabia. When you hear from that perspective in the Middle East, they don’t want us in their country. The same with Iraq. We wouldn’t want anyone in our country taking over and jumping in.

“This president is making really bad decisions. I don’t agree with him.

“Nobody really wants war. We want to do what is right, defend our country. But that’s why we are supposed to be a democracy. But Trump is being totally barbaric, like any other dictator. It is almost like we are being run under a dictatorship.” 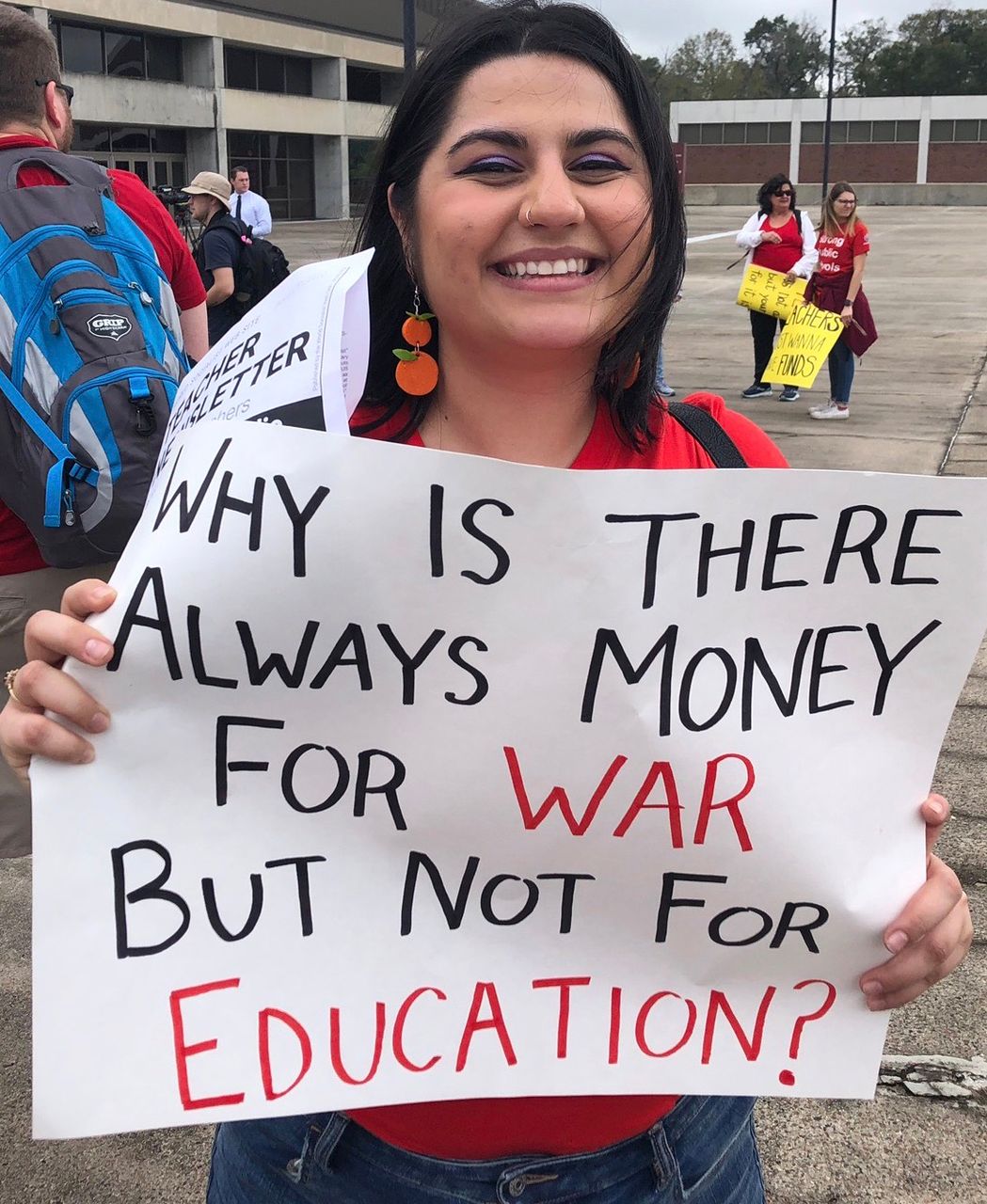 Other workers denounced the war moves in more explicit terms. Larry, a retired General Motors worker and long-time reader of the WSWS, said, “I was scared when Trump assassinated General Suleimani. I said to myself, ‘Here we go again with another 20-year murderfest in the Middle East.’ Trump is looking after the interests of the oil companies and defense contractors. Iran and Iraq have some of the world’s largest oil reserves.

“The US should get out of the Middle East and stop interfering with the lives of the people there. I remember when Reagan was doing the same thing by waging secret wars in Nicaragua, El Salvador and other Central American countries in the 1980s. Behind these wars, the US corporations are looking to grab raw materials and set up cheap labor platforms. I’ve come to realize this over the last 50 years.

“People in the US have to understand that capitalism is a world-wide system and the same corporations that are attacking our jobs and wages here go all over the world to exploit cheap labor and the lack of environmental protections. They want to even out the wages all over the world, by driving us into poverty. Karl Marx said the capitalists breed us to work and produce another generation to exploit once we’re worn out or dead.

“We have to unite labor around the world to fight this. We have to communicate with each other. The proletariat has the same goals everywhere: to take care of our families, to have dignity. We don’t want to be rich but to have enough to live in dignity. All working-class people around the world feel the same. Why should we follow these politicians, and the union officials too, who want us to fight and kill each other for corporate profits?

“The growth of the internet gives me great faith that we can stop war. Workers and young people can talk to a family in Iran, Russia or China. We can see that we have the same goals and all want dignity and peace. The Iranian people are not our enemies, they don’t want to start another world war. They hate Trump, not the American people.

“That is what the government fears, that workers and young people around the world will talk to each other and oppose war. That is why they threw Julian Assange and Chelsea Manning into prison, because they exposed the war crimes. Obama and the Democrats are just as guilty as Trump and the Republicans.”

A GM worker from Flint Assembly with many family members in the military also commented on the role of social media. “It’s great that American youth are getting on the internet and talking directly with youth in Iran. These kids use social media to study the issues and they don’t want to fight a war for nothing.”

A Missouri tradesman and member of the Steering Committee of the Coalition of Rank-and-File Committees, which was established in 2018 at a meeting sponsored by the World Socialist Web Site and Socialist Equality Party, said, “One thing that struck me as very different between today and back in 2003 or even later is the conversations I have at work. After the murder of Suleimani, the guys I work with are saying, ‘That president of ours is a damn idiot. He’s done it now. This is all gonna blow up.’ But there’s no followup about supporting the troops or any of that. The attitude is very different today. Some of these guys voted for Trump and you don’t even hear his name. What I hear is, ‘They aren’t gonna fool me again.’

“The murder of Suleimani and what could follow is chilling. It was also totally illegal, criminal. What is a president that makes this decision to murder a general of a sovereign nation? It forces one to take stock of not only the last four to five years, but the lessons of a whole period. Bush and Obama laid the ground for this.”

A GM worker in Missouri and a long-time reader of the WSWS added, “Killing a major Iranian general is insane. Iran is not a country that can be bullied without consequence, as it has ties to nuclear-armed Russia. Bragging about extrajudicial assassination when the world is on a hair-trigger is insane. This is part of a buildup to a war that would have horrific casualties on all sides.

“Food stamps were just cut for 700,000 US citizens. Our government spends billions of dollars on war while millions suffer from hunger and poverty. There is no way we go through 2020 without the same mass protests in the United States that have hit other countries around the world.”

Steve, a teacher from Northern California and a member of the Steering Committee, said, “I oppose US imperialism and its drive towards world war. Imperialism uses its military, its political system, and its economic web of ruthless capitalist enterprises to impose its death grip on the working class and the masses at home and abroad.

“The assassination of the Iranian general Suleimani and Abu Mahdi al-Muhandis, a leader of the Popular Mobilization Forces in Iraq, came after the US military bombing of locations in Iraq and Syria which murdered more than 25 people. This is part of a decades-long campaign by US imperialism, Israel and Saudi Arabia not only against Iran and Iraq, but against the masses in the Middle East, including in Yemen, Lebanon, the West Bank, Gaza Strip and Libya.