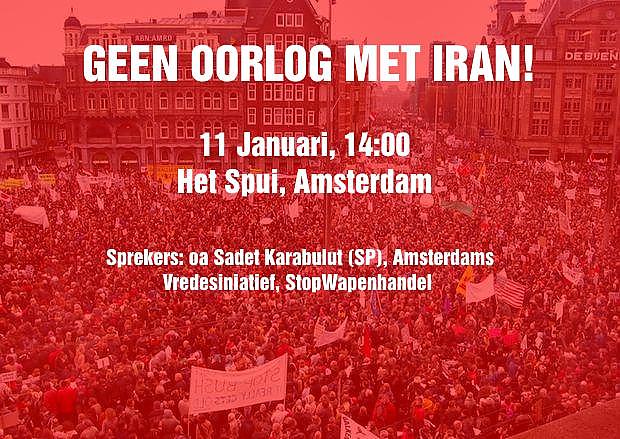 On Saturday 11 January, there will be a demonstration in Amsterdam, the Netherlands, against the danger of war on Iran by United States President Donald Trump.

There will be speeches by Sadet Karabulut (MP of the Socialist Party), Femke Roosma (Green Left party), the Amsterdam peace committee and Stop the Arms Trade.

Due to the US American attack on General Soleimani of Iran, the tensions between the US and Iran are increasing and a war is threatening that would have consequences for the entire world.

The US wants to expel the Iranian regime and determine who has access to oil and other resources in the Middle East.

Since the US American invasion of Iraq (2003), many wars have been waged in the Middle East, resulting in great human suffering. But democracy, security and stability are not brought with bombs.

The current crisis began with the cancellation by the US of the international atomic agreement with Iran – an agreement which Iran observed, according to observers.

The people in Iraq and Iran have been protesting for months against their authoritarian leaders. Again, war machines deprive them of the opportunity to build up demonstrations.

The Netherlands supplies weapons for these wars. The Reaper drone with which the attack on the Iranian general was committed is partly produced by Fokker in the Netherlands. The Netherlands wants to send the warship De Ruyter to a European military mission in the Persian Gulf. The ship has not yet departed. The Amsterdam Peace Initiative and Stop the Arms Trade call on the Dutch government to refrain from participating in this mission.

The risk that we are unintentionally drawn into a war that Europe does not want is huge. The Netherlands must take diplomatic steps and not deploy military means.

Peace activists from Zaanstad are going on 11 January.

HOUSE VOTES TO LIMIT IRAN WAR By a vote of 224 to 194, with three Republicans and one independent in support and eight Democrats against, the House approved the war powers resolution forbidding President Donald Trump from attacking Iran unless there’s an imminent threat or Congress declares war. [HuffPost]

AT TRUMP’S FIRST 2020 RALLY, HE DEFENDS SOLEIMANI KILLING  Trump defended his order to assassinate a top Iranian military leader, painting his decisions as commander in chief as a prime reason to reelect him. “By subsidizing Iran’s maligned conduct, the last administration was leading the world down the path of war,” Trump said. [HuffPost]

The German government is preparing to support a possible US war against Iran. Foreign Minister Heiko Maas (SPD—Social Democratic Party) and Defence Minister Annegret Kramp-Karrenbauer (CDU—Christian Democratic Union) made this clear once again on Wednesday. Having previously defended the US assassination of Iran’s leading general Qassim Suleimani—an illegal act of state terrorism—they condemned the Iranian retaliatory strike against US targets in Iraq: here.