This 9 January 2020 video is called What’s Happening in Puerto Rico After The 6.4 Magnitude Earthquake.

Tens of thousands of Puerto Ricans still without electricty, water days after earthquake

All across Puerto Rico, residents continued to reel from the damage inflicted by the 6.4 magnitude earthquake that struck the impoverished US territory on Tuesday. At least two thirds of the island’s population remained without electricity as of Thursday, and 250,000 without clean water. Everywhere, residents could be seen sleeping outside, fearful of aftershocks.

One death has been attributed to the earthquake so far, a figure likely to rise as officials continue to assess the damage. As many as 40 aftershocks with a magnitude of 3.0 or higher have occurred since the quake on Tuesday, further damaging structures and slowing relief efforts.

Thousands of homes and other structures have already collapsed, with many more fatally compromised by the tremors. Most of the island’s infrastructure was constructed before new building codes were enacted in 1987 to require modern seismic safety standards. This includes as many as 95 percent of the island’s schools, according to a statement made by Eligio Hernandez, Puerto Rico’s education secretary. 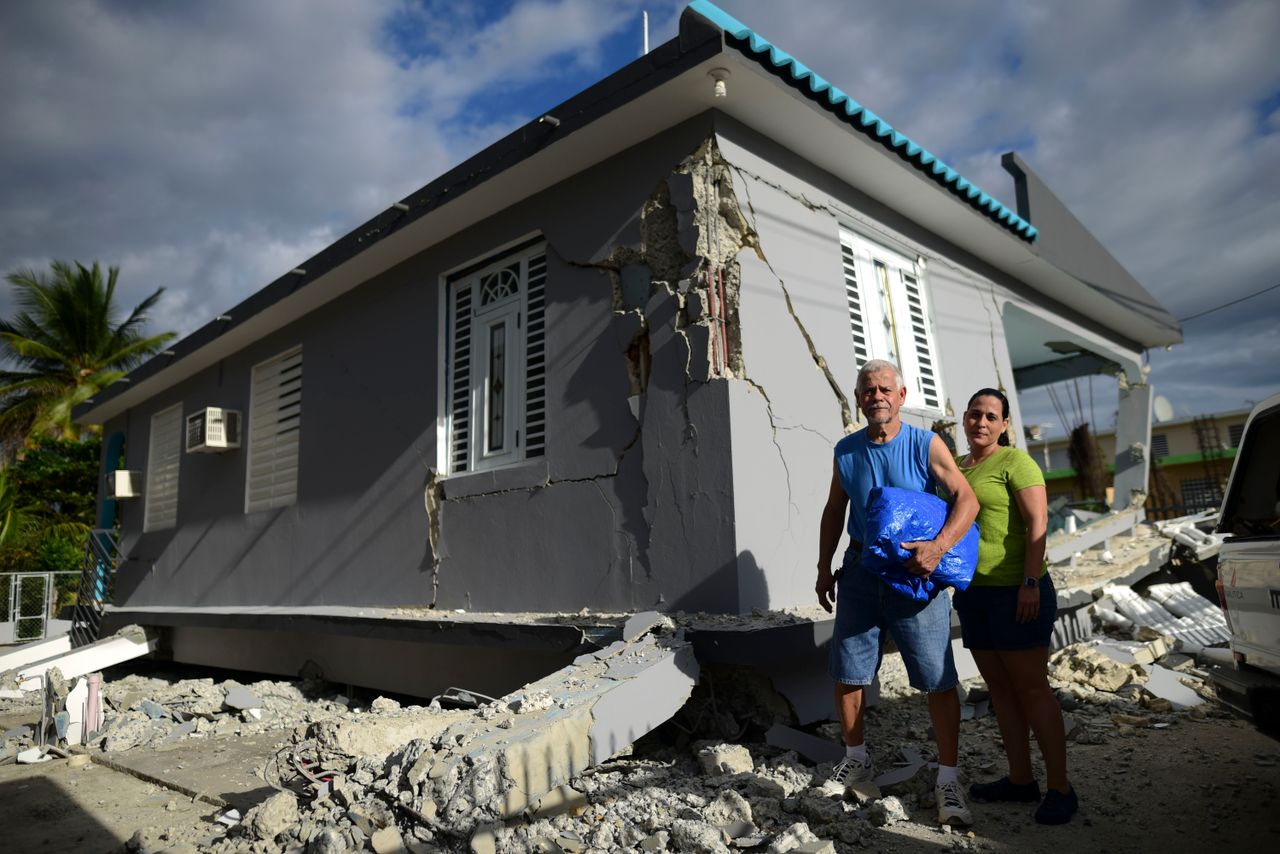 Classes for public schools were canceled indefinitely as officials assessed the safety of school buildings across the island. According to the New York Times, an effort to retrofit schools up to modern safety standards was enacted a decade ago but abandoned after only around 100 schools were renovated.

Many of Puerto Rico’s power plants are located along the southern region of the island most affected by the earthquake, including the Costa Sur power plant in Guayanilla that provides power for a quarter of the island and suffered heavy damage. Jose Ortiz, the CEO of the Puerto Rico Electric Power Authority (PREPA) predicted that it could take up to a year to repair the aging plant, telling CBS This Morning, “To be honest, those plants have over 60 years, basically… Imagine you have a taxi, 60 years old, and you are required to run that 24/7.”

The Trump administration declared an emergency in Puerto Rico after Tuesday’s earthquake, ostensibly allowing the Federal Emergency Management Agency (FEMA) to release funds for disaster relief. Given FEMA’s record in responding to natural disasters generally, it is unlikely that an adequate amount of funding will ever be provided to the victims of the earthquake.

Tuesday’s quake was the strongest so far in a series of tremors that have affected the island since December 28th. The epicenter of the earthquakes has been located approximately eight miles offshore of the town of Indios on the southern coast of the island. The US Geological Survey has warned that there is an 82 percent chance that another earthquake of 5.0 magnitude or higher will occur in the next week.

The impact of the earthquakes has been compounded by the fact that the island has still not recovered from Hurricane Maria in 2017, which killed 5,000 residents and destroyed much of Puerto Rico’s infrastructure. In the aftermath of that disaster, both local and federal officials sought to minimize the extent of the damage, claiming initially that only 16 people lost their lives.

The Washington Post reported on Thursday that, of the $19.9 billion appropriated by Congress in Housing and Urban Development funds for disaster relief in Puerto Rico following Hurricane Maria, only $1.5 billion has been dispersed so far, with the Trump administration claiming they are withholding funds due to concerns about corruption on the island. This is in spite of the fact that the disaster relief bill passed by Congress mandated that $8.3 billion be made available by September 4th of last year, meaning the current withholding of funds is illegal.

The criminally inadequate response by both federal and local officials has illustrated the fact that nothing has fundamentally changed since the mass protests last year that saw the ouster of Puerto Rican Governor Ricardo Rossello and his eventual replacement by current Governor Wanda Vasquez. Both are members of the New Progressive Party, which is politically aligned with the Democratic Party in the US.

Those protests, which were ignited by the release of text messages between government officials demonstrating their corruption and disdain for the victims of Hurricane Maria but ultimately inspired by the squalid living conditions and vast levels of social inequality on the island, saw the participation of up to 1 million Puerto Ricans, or nearly a third of the population.

In the aftermath of the protests, the Vasquez administration has done nothing to improve the living conditions of Puerto Rican workers. Just as with the previous government under Rossello, the primary goal of her administration has been the imposition of austerity measures upon the working class and the privatization of state-owned infrastructure to make the bogus debt payments demanded by Wall Street loan sharks.

The mechanism for enforcing these payments is the Financial Oversight Management Board created under the Obama administration and staffed by a bipartisan group of bankers, corporate lawyers and other parasites appointed by the President. Included among the measures promoted by the board is the privatization of both PREPA, the island’s publicly held electrical utility, as well as the public-school system. In July of 2018, the FOMB released a plan calling for the elimination of thousands of government jobs, the slashing of pension and benefit payments and the elimination of labor protections, among other measures.

5 thoughts on “Puerto Ricans without electricty, water after earthquake”