Whether it’s a new dinosaur species discovered in someone’s garden by mistake, proof of sea monsters revealed, or a fossilized superhighway of prehistoric activity in Scotland, here are 13 incredible fossils recently discovered.

13. A New Species of Dinosaur
In 2005, a dinosaur enthusiast was digging on his Montana ranch when he stumbled upon some large and mysterious bones. The remnants included a half skull, backbone, hip, and legs, all of which were sent to the Canadian Museum of Nature for analysis. Ten gruelling years passed by— for dinosaur evaluation is no quick task, before the museum finally worked the bones out to belong to a whole new species of dinosaur. Named Spiclypeus shipporum, this spiky-headed beast roamed the planet 80 million years ago and is closely related to the Triceratops.

12. Pliosaur
A mysterious find occurred in 1997 from Ipswich, U.K. Experts astoundingly professed that the bone belonged to a pliosaur. This variety of extinct marine reptile was from the Jurassic and Cretaceous periods, resembling a crocodile-like short-necked creature with large heads and massive toothed jaws. What made the find even more perplexing, however, was that pliosaurs were not native to the English sea.

11. Woolly Mammoth Bone
In 2010, a family was picking fruit in their wooded backyard when one of their children spotted a white object protruding from the ground. After digging it out, they discovered it was a large femur. Scientists from a local university later identified it as a 12,000 years old woolly mammoth bone. After paleontologists came to the home, they soon discovered many more bones around, with only the giant mammoth skull missing.

10. Hammerhead Reptile
The skull of a Triassic ocean-dwelling reptile called Atopodentatus was depicted as having tiny, needle-like teeth and appeared to be filter-fed. Fortunately, the discovery of a new specimen in 2016 revealed this marine reptile to have a bizarre “hammerhead” instead.

8. The Bat-Winged Dinosaur
The newly discovered dinosaur Yi qi is magnificent in its own accord; in fact, the creature is one of the closest dinosaur specimens related to modern birds. Yi qi had a membrane between its fingers reminiscent of aerial gliding capabilities.

7. Sea Monster
In 2016 a paleontologist by the name of Victoria McCoy closely examined the morphology of over 1,200 Tully Monster specimens. Finally, the true identity was revealed— the species which lived 300 million years ago was a jawless fish-like vertebrate called a lamprey.

6. Yutyrannus
Yutyrannus was discovered in 2012. Scientists found that this early Cretaceous meat-eater, also a tyrannosaur, which lived in Asia 50 million years before the North American rendition of T. Rex, had a sleek coat of beautiful brown feathers. This means that all tyrannosaurs had feathers at some stage of their life cycles.

5. Heart Impressions
Due to incredibly well-preserved fossils, a team of scientists from Brazil, Sweden, and France were able to peer inside of a 73-million-year-old fish in order to glimpse the oldest vertebrate chambered heart ever discovered. The Brazilian fish called Rhacolepsis buccalis was an exceptional find because, for the first time, researchers can trace cardiac evolution in vertebrates.

4. Skin Impressions
The village Vallcebre is where the scaly impressions [of dinosaurs] can be seen, and the fossilized skin is approximately 66 million years old. These fossils preserve one of the last, very detailed glimpses of these majestic creatures before they became extinct.

3. Human Footprints
For years the only human footprints ever found at the Laetoli early human site in Tanzania were those discovered by scientists Mary Leakey in 1976. In 2016, however, researchers from both Tanzania and Italy revealed a new site containing additional 3.6-million-year-old Australopithicus afarensis footprints.

2. Dinosaur Footpath [in Scotland]
The discovery was not of bones but rather, a host of massive footprints, revealing where the prehistoric creatures walked, lived, and fed 170 million years ago.

1. Sinosauropteryx
This discovery marked the first of a remarkable series of discoveries of “dino-bird”— that is, unmistakable impressions of primitive, hair-like feathers— the first-ever detection of these kinds of features on a dinosaur. This particular discovery occurred in China’s Liaoning quarry, in which the extremely well-preserved fossil of Sinosauropteryx betrays these same bird-like characteristics.

This year’s fossil finds, from vast new collections of species to wonderful and weird curiosities, helped reveal the richness and diversity of life on Earth over the last half a billion years.

China’s Qingjiang biota is a treasure trove of beautifully preserved fossils, including jellyfish, comb jellies, mud dragons and arthropods. The remains document the Cambrian explosion, a rapid flourishing of life-forms, and include many organisms never seen before — even at the most famous Cambrian fossil site, Canada’s Burgess Shale (SN: 4/27/19, p. 14).

You can tell a lot about an animal from the way it moves, which is why scientists have been recreating the movements of an extinct crocodile-like creature called Orobates pabsti.

Orobates lived well before the time of the dinosaurs and is what’s called a ‘stem amniote’ – an early offshoot of the lineage which led to birds, reptiles and mammals. Using 3D scans of an exquisitely preserved Orobates fossil – and an associated set of fossilised footprints – researchers were able to build a dynamic computer simulation of the creature’s movement.

The simulation incorporates data from extant animals such as lizards and salamanders to create more realistic motion as it walks along. And the simulation didn’t just stay on a computer; the researchers tested the models in the real world using a Orobates robot, helping bring this ancient creature to life.

Using re-created skeletons, fossil trackways, computer simulations and a robot (shown), scientists concluded that four-footed Orobates pabsti held its belly off the ground as it walked with minimal side-to-side undulation. For such an ancient critter, O. pabsti — one of the earliest amniotes, a group that includes reptiles and mammals — had a surprisingly efficient gait (SN: 2/16/19, p. 7).

A growth preserved in the fossilized left femur of an ancient turtle relative is the oldest known case of bone cancer in an amniote (bracket indicates the tumor on the several-centimeters-long fossil) (SN: 3/16/19, p. 5).

This 2019 video says about itself:

Tiny hyoid bones are preserved below the skull in the Jurassic mammaliaform Microdocodon. Comparison of Microdocodon to distant cynodont relatives and modern mammals reveals new information about hyoids and middle ears of Mesozoic mammals. The discovery of modern mammal-like hyoids of a mammaliaform sheds light on the first appearance of the swallowing function in mammal evolution. (Credit: April I. Neander)

4. A bone for chewing

Millions of years before true mammals emerged, a shrew-sized mammal relative, Microdocodon gracilis, had a flexible bone called the hyoid connected to the jaw. The hyoid helps mammals chew, swallow and suckle — a key innovation that may be one secret to mammals’ success (SN: 8/17/19, p. 8).

This 20 March 2019 video is called Ancient Bird Fossil Has Unlaid Egg Inside.

A small bird died with an egg still inside her body, and problems laying that egg may have led to her death. Crushed and flattened over time by pressure, the specimen is the first unlaid bird egg found preserved as a fossil (SN: 4/13/19, p. 15). 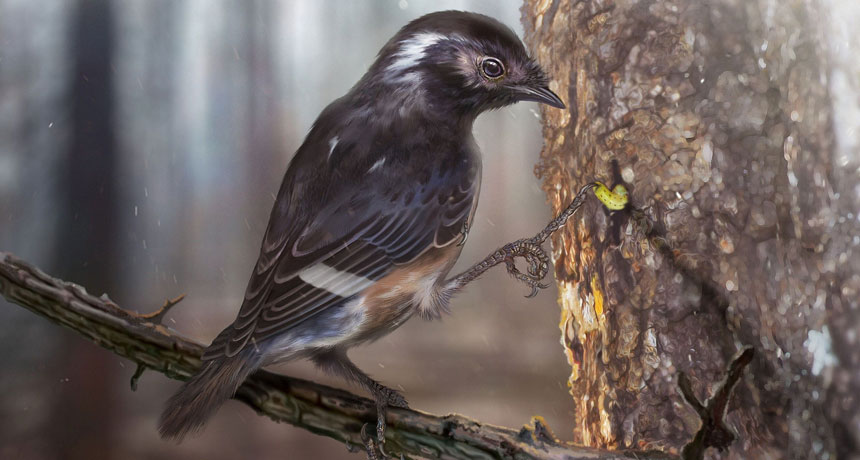 A chunk of amber containing the right leg and foot of a sparrow-sized bird (illustrated) revealed a bizarrely long digit. The bird may have used the toe to feel around for food in hard-to-reach places (SN Online: 7/11/19).

Decades after its discovery, a dinosaur was ID’d as a cousin to the giant tyrannosaurs. Just a meter tall at the hip, Suskityrannus hazelae (illustrated) had a strong jaw and powerful hind feet, like its bulkier kin T. rex, which lived 24 million years later (SN: 6/8/19, p. 5).

8. Life after the dinosaurs

66 million to 65 million years ago

The story of how life rebounded after the mass extinction of nonavian dinosaurs is told by fossils found in Colorado (mammal skulls shown). The fossils, dating to within a million years after the die-off, reveal that mammals grew fivefold in size and big plants rapidly diversified (SN: 12/7/19, p. 32).

This 28 August 2019 video is called MRD cranium – the face of Australopithecus anamensis.

A nearly complete skull gives the first glimpse at the face of Australopithecus anamensis, the oldest known species in the hominid genus that includes A. afarensis, best known for Lucy’s skeleton. The find raises questions about how the two species were related (SN: 9/28/19, p. 6).

This 2012 video is about Apodemus flavicollis yellow-necked mice, relatives of the recently studied fossil species.