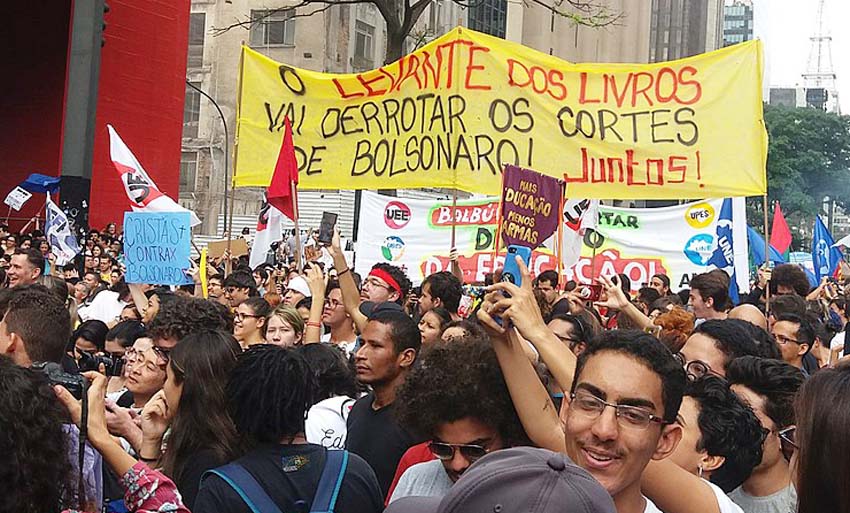 The study, Picked by Slaves: Coffee Crisis Brews in Brazil, carried out by Thomson Reuters, provides new evidence of how coffee produced under brutally exploitative conditions on farms in the Brazilian state of Minas Gerais is sold at a premium price by multinationals, thanks to certification schemes like Rainforest Alliance.

Brazil produces one-third of global coffee beans and Minas Gerais, in turn, accounts for half of this production.

According to the report: ‘More than 300 coffee workers were found by officials in slave-like conditions nationwide in 2018, the highest in 15 years, but the true extent of slavery in the sector is unknown.’

The report cites academics and activists as saying: ‘The scale of slave labour across Minas Gerais is likely to be significant and largely unchecked.’

Brazil’s penal code defines slavery to include exhaustive working hours and degrading conditions of work in addition to debt bondage and forced labour.

The government budget to fund inspections has been slashed while coffee exports have soared.

For years, the number of roving inspection units has declined.

Minas Gerais, with at least 119,000 coffee plantations and hundreds of thousands of workers, the vast majority of them entirely precarious with no rights to minimum standards of employment or social protection, has only 245 inspectors.
Private certification has built a global business on the back of the state’s massive failure to ensure minimum conditions.

Buyer beware: ‘Rainforest [Alliance] endorses hundreds of coffee plantations in Minas Gerais through a system of “group certifications” despite auditing only a fraction of any collective’s many farms,’ says the report.

In a 2019 evaluation of its Brazil coffee certification programme, UTZ, part of the Rainforest Alliance, reported that 98% of its certified producers were medium to large farms.

According to the report, labour violations were identified by officials in 10 farms certified by Rainforest or Brazil’s Certifica Minas, which works with Syngenta.

Systemic violence underpins this system of exploitation – an element missing from the Thomson Reuters report.

Trade union organisers, social and civil rights activists and even labour inspectors are murdered with impunity.

Rainforest Alliance, according to the report, is ‘considering a change to ensure all farms are independently audited at least once every three years.’

He sent to Congress a new proposed law (6159/2019) that would eliminate just access to jobs for disabled people.

Since 1999, Brazil’s ‘quota law’ required companies to ensure that at least 2 to 5 per cent of its workforce were from the disabled community.

Bolsonaro is attempting to roll back gains made by disabled workers.

In addition, it violates the UN Conventions for the protection of disabled people.

In addition, the proposed law would:

There was an immediate angry response to Bolsonaro’s proposal to make it more difficult for disabled workers to integrate to mainstream Brazilian society, contribute to the economy, and live independent lives as all workers.

Throughout the country, trade unions and civil society organisations have joined the disabled community to mobilise against the proposed law.

The BWI trade union federation and its affiliates in Brazil are as outraged by the extremist government’s actions.
According to Nilton Freitas, BWI Regional Representative for Latin America and the Caribbean: ‘We must continue to mobilise and support workers with disabilities by defeating this government’s proposal.

‘This is a blatant attack against Decent Work for disabled workers in Brazil, and this is why we must fight back.’

Bolsonaro accused the press of bias against him and his son, Senator Flavio Bolsonaro.

Prosecutors in Rio de Janeiro are investigating allegations the younger Bolsonaro hired employees with no duties while he was a state legislator.

Another investigation is probing whether those ‘phantom’ workers kicked back part of their salaries to then be laundered through a chocolate shop he co-owns.

In a video posted to Facebook, the younger Bolsonaro has delivered a lengthy denial of all wrongdoing.

The drone of accusations has been a thorn in the side of President Bolsonaro, who was elected on an anti-crime platform to purge the political class of corruption.

He has routinely attacked the credibility of the mainstream media.

At a routine morning meeting with journalists in the capital last Friday, the president complained that media have accused him of being a racist and committing crimes against the environment.

Then he told one reporter: ‘Your face looks an awful lot like a homosexual’s, but that’s no reason to accuse you of being a homosexual.’

The comment was met with laughs from his aides and supporters standing nearby.

Bolsonaro has a history of making derogatory remarks about women, gay people and racial minorities, including on last year’s campaign trail.

Asked at the morning briefing whether he had proof that a suspicious deposit into his wife’s bank account was merely repayment of a debt, Bolsonaro instructed the journalist: ‘Ask your mother if she gave your dad a receipt,’ prompting a cheer from his supporters.

The privatisation bill for Centrais Eletricas Brasileiras, as Eletrobras is officially named, is opposed by 48 out of 81 Senators, Alcolumbre told reporters.

In 2017, Brazil announced that it would put up for privatisation 57 major state infrastructure assets, including selling some or all of its 51 per cent stake in Eletrobras.

In early 2018, Eletrobras expected that the share sale part of its privatisation could raise between US$3 billion and US$4 billion.

The Eletrobras share sale is expected to be the largest privatisation in Brazil in the past 20 years as Bolsonaro pushes to cut the state’s control over the industry.

Eletrobras controls transmission lines and electric generating plants throughout Brazil, and owns power distribution companies that are now being sold.

Eletrobras accounts for almost one-third of Brazil’s power-generating capacity and almost one half of the nation’s high-voltage transmission network.

Earlier this year, Bolsonaro approved a plan for Eletrobras’ privatisation, which entails selling new shares to private investors and thus reducing the Brazilian state’s stake in the utility.

Bento Albuquerque, Brazil’s Mines and Energy Minister, said in early November that Eletrobras would probably be privatised in the second half of next year.

But Bolsonaro’s plan has now hit a snag at the Senate, with Senate President Alcolumbre saying that the plan in its current form would not pass in the Senate and that the government needs to draft another plan for the privatisation of Eletrobras.

BRAZIL’S BOLSONARO IS THE FAR-RIGHT AUTHORITARIAN HE PROMISED HE’D BE Since taking office a year ago, Jair Bolsonaro has followed through (or attempted to) on nearly all of his ugliest promises, with troubling and disastrous consequences for Brazil’s environment and the Amazon rainforest, its already-marginalized Black, LGBTQ, Indigenous and poor communities, and the institutions that form the backbone of any democratic society. [HuffPost]