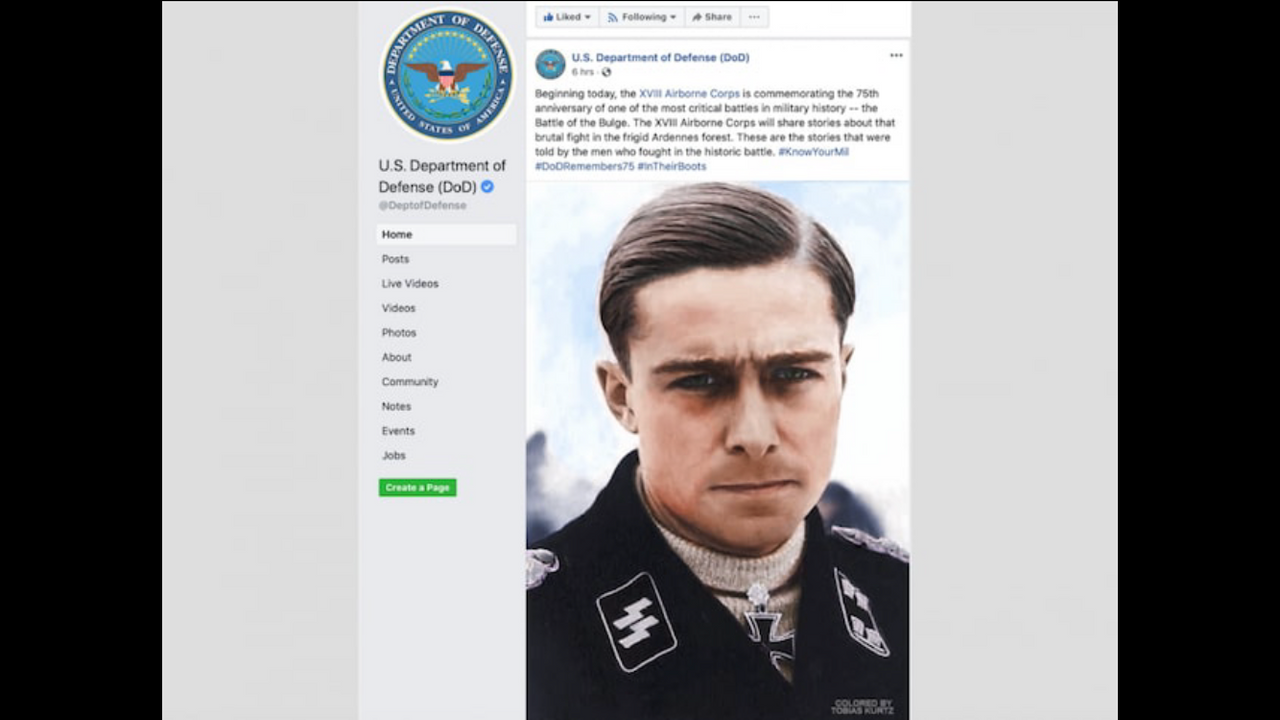 By Kevin Reed in the USA:

On the occasion of the 75th anniversary of the Battle of the Bulge—the final German military offensive on the Western Front of World War II—the US Army’s XVIII Airborne Corp posted a tribute to a notorious Nazi war criminal on its Facebook page.

The original post, which first appeared on Monday, gave a sympathetic portrayal of the Panzer tank commander and Waffen-SS officer Joachim Peiper who led the surprise attack on Allied forces beginning December 16, 1944 and was responsible for the mass execution of 84 American soldiers the next day, among other war crimes.

The post included a glamorized photo of Peiper and contained the following description: “He paused at his desk. He hated to be alone with his thoughts, with the feeling of uncertainty he’d been trying to avoid for weeks.” The post was also shared without comment on the Facebook pages of both the Department of Defense and the Army’s 10th Mountain Division.

Although the photo of Peiper and the Facebook shares have since been deleted and text edits have been made, such as the insertion of the phrase “an evil war commander” into the first sentence, the main body of the original post on the XVIII Airborne Corp Facebook page remains. This includes the following passage: “Five years after Germany began a war in Europe by invading Poland, this surprise western counteroffensive Peiper was set to launch was the only hope for the survival of Nazi Germany.

“The mission was called ‘Unternehmen Wacht am Rhein’ (‘Operation Watch on the Rhine’), and Joachim would lead it. The fate of his beloved nation rested on his ability to lead his men through the American lines.”

According to a report in the Washington Post, the colorized photo of Peiper contained a watermark that reads, “Colored by Tobias Kurtz”, and is the work of an artist with a fascination with Nazis and Adolf Hitler.

The Post report says, “Kurtz’s Deviant Art and Flickr accounts say he is a Slovakia-based gamer who likes photography and graphic design. He has also shared an image of Hitler laughing as a group of German soldiers prepare to execute a kneeling man and ‘favorited’ an illustration of Hitler punching an American soldier while Nazis cheer. ‘This photo have my [thumbs up emoji]’, Kurtz wrote in the comments of the drawing.”

The glorification of Peiper on Facebook by the XVIII Airborne Corp excluded any mention of his role as a favorite personal adjutant to the Reichsfürher-SS Heinrich Himmler who directed the Nazi concentration camps where an estimated 11 million to 14 million people were murdered, including 6 million Jews. There is also no mention of Peiper joining the Hitler Youth in 1933 as an 18-year-old and how he worked his way, after being trained at the Dachau concentration camp, into Hitler’s personal security staff by 1936.

On December 17, 1944, Peiper led a group of 84 American prisoners of war, who had surrendered during the Battle of the Bulge, into a snow-covered field near Malmedy, Belgium and ordered them shot down by machine guns.

After the war, Peiper was arrested and tried in 1946 at Dachau under the rules of the Nuremberg International Military Tribunal. He was convicted together with 42 other defendants and sentenced to death by hanging. Peiper’s death sentence was later commuted to life imprisonment by the commander of the US Army in Germany.

In 1950, through the intervention of the US Senate, including the anti-Communist Joseph McCarthy, it was determined that Peiper was not given a fair trial. He was eventually released in 1956 after serving less than 12 years in prison. In the 1960s, Peiper worked at the auto company Porsche in Stuttgart and then moved to France in the 1970s. In 1976, his house in Traves was firebombed and Peiper was killed at the age of 61.

The XVIII Airborne Corp refused to make any changes to its Facebook post even after numerous outraged comments from readers. Among these were, “Tremendous work on glorifying a man who slaughtered almost a hundred American prisoners of war. The rot is evident.” And, “Really? You had to post a picture of a Nazi SS officer to commemorate the battle of the bulge? I guess that would represent the views of our current administration.”

According to the Post, the XVIII Airborne Corp responded to the criticisms on Facebook in since deleted responses that Peiper was a “terrible person” but an “effective combat leader” who “rocketed through the ranks during the war, racking up medals, & promotions.”

Apparently, the changes were only made when an Army public affairs officer criticized the post on Twitter, saying, “I am dumbfounded by the decision to prominently display a Nazi on military social media on the 75th anniversary of the Battle of the Bulge.”

In its own Twitter reply on Tuesday morning, the XVIII Airborne Corps wrote, “We regret the use of the photograph of Joachim Peiper. The intent was to tell the full story of the Battle of the Bulge, which will continue here, by explaining the incredible odds that were stacked up against the American Soldier by the time the reserve was called in on 18 Dec.”

The publication of a glorified portrayal of a Nazi on Facebook by a US Army corps comes just two days after West Point cadets and Annapolis midshipmen were seen on national television flashing a known “white power” hand gesture during the annual Army-Navy football game in Philadelphia.

The sympathetic portrayal of the well-known Nazi war criminal by a section of the US Army is further exposure of a base of extreme right-wing and fascistic elements within the American armed forces. Furthermore, it demonstrates that efforts are underway at the highest levels of the state to rehabilitate Nazism and build support within the military and society in general for a fascist movement in the United States.

Neo-Nazi networks exposed across US military
[4 May 2019]