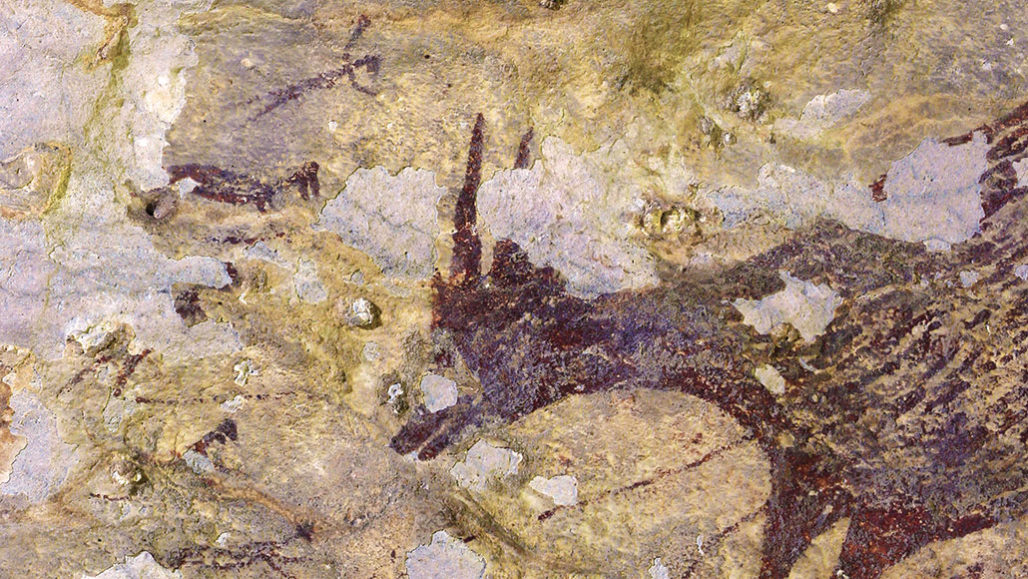 The panel was found in an island cave in Indonesia

Discovered in December 2017 on the island of Sulawesi, this roughly 4.5-meter-wide hunting scene was painted at least 43,900 years ago, says a team led by archaeologists Maxim Aubert and Adam Brumm, both of Griffith University in Gold Coast, Australia. Part-human, part-animal hunters depicted in the mural indicate that people at the time believed in supernatural beings, the scientists report December 11 in Nature.

“We assume these ancient artists were Homo sapiens and that spirituality and religious thinking were part of early human culture in Indonesia,” Brumm says.

Two pigs and four miniature buffalo called anoas, which still inhabit Sulawesi forests, range across the cave art scene. Eight small, humanlike figures with animal characteristics appear to be hunting the painted pigs and anoas with spears or ropes. One hybrid creature sports a tail. Another has a beaklike snout.

Mythical human-animal hybrids, also known as therianthropes, often appear in folklore and in fiction of modern societies. Many religions regard therianthropes as gods, spirits or ancestral beings. Figurines of a lion-headed person (SN: 5/19/09) and a woman with exaggerated features previously found in a German cave date to as early as 40,000 years ago, as do flutes made of bone and mammoth tusks found in the same cave (SN: 6/24/09). A drawing of a man with a bird’s head inside France’s Lascaux cave dates to between around 14,000 and 21,000 years ago.

Abstract cave art generally attributed to H. sapiens dates to at least 40,800 years ago in Europe (SN: 6/14/12). In other Sulawesi caves studied by Aubert and Brumm, wall stencils that Stone Age people made by blowing or spraying pigment around outstretched hands date to around 40,000 years ago (SN: 10/8/14). Researchers had reported evidence of European Neandertals creating abstract cave art at least 65,000 years ago, but those reports have come under fire (SN: 10/28/19).

Measures of radioactive uranium’s decay in mineral layers that formed over parts of the Sulawesi hunting depiction provided minimum age estimates ranging from 35,100 to 43,900 years. The oldest mineral layer comes closest to the painting’s actual age, the researchers say.

If confirmed in further research, that age estimate makes sense, says archaeologist Nicholas Conard of the University of Tübingen in Germany. Art, music, religion and language characterize modern human groups worldwide, and the same would have held for Stone Age groups, asserts Conard, who directed excavations of the ancient figurines and flutes in Germany. …

Figurative paintings in several other Sulawesi caves have been found but not yet dated, Brumm says. Nearly all these artworks, including the hunting scene, have deteriorated substantially. “We urgently need to determine why this art is disappearing and what to do about it.”

This 3 December 2019 video is about the new discovery.