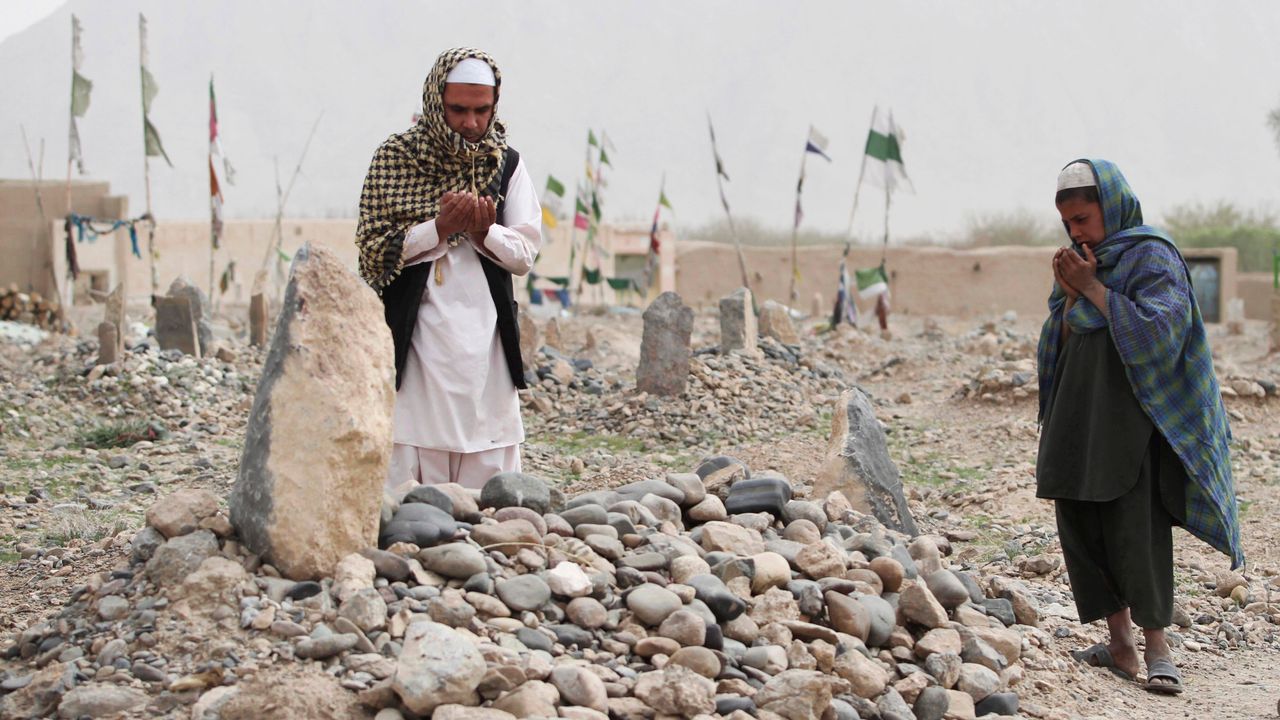 This Associated Press photo by Allauddin Khan shows villagers praying over the grave of one of the 16 victims killed in a shooting rampage by a US soldier in the Panjwai district of Kandahar province south of Kabul, Afghanistan, Saturday, March 24, 2012.

The “Afghanistan papers”: The criminality and disaster of a war based upon lies

The publication Monday by the Washington Post of interviews with senior US officials and military commanders on the nearly two-decades-old US war in Afghanistan has provided a damning indictment of both the criminality and abject failure of an imperialist intervention conducted on the basis of lies.

The Post obtained the raw interviews after a three-year Freedom of Information Act court battle. While initially they were not secret, the Obama administration moved to classify the documents after the newspaper sought to obtain them.

The interviews were conducted between 2014 and 2018 in a “Lessons Learned” project initiated by the office of the Special Inspector General for Afghanistan Reconstruction (SIGAR). The project was designed to review the failures of the Afghanistan intervention with the aim of preventing their repetition the next time US imperialism seeks to carry out an illegal invasion and occupation of an oppressed country.

SIGAR’s director, John Sopko, freely admitted to the Post that the interviews provided irrefutable evidence that “the American people have constantly been lied to” about the war in Afghanistan.

What emerges from the interviews, conducted with more than 400 US military officers, special forces operatives, officials from the US Agency for International Development (USAID) and senior advisers to both US commanders in Afghanistan and the White House, is an overriding sense of failure tinged with bitterness and cynicism. Those who participated had no expectation that their words would be made public.

Douglas Lute, a retired Army lieutenant general who served as the Afghanistan “war czar” under the administrations of both George W. Bush and Barack Obama, told his government interviewers in 2015, “If the American people knew the magnitude of this dysfunction… 2,400 [American] lives lost. Who will say this war was in vain?”

Stephen Hadley, the White House national security adviser under Bush, was even more explicit in his admission of US imperialism’s debacle in Afghanistan—and elsewhere. He told his SIGAR interviewers that Washington had no “post-stabilization model that works”, adding that this had been proven not only in Afghanistan, but in Iraq as well. “Every time we have one of these things, it is a pickup game. I don’t have any confidence that if we did it again, we would do any better.”

Ryan Crocker, who served as Washington’s senior man in Kabul under both Bush and Obama, told SIGAR that “Our biggest single project, sadly and inadvertently, of course, may have been the development of mass corruption. Once it gets to the level I saw, when I was out there, it’s somewhere between unbelievably hard and outright impossible to fix it.”

This corruption was fed by vast expenditures on the part of the US government on Afghanistan’s supposed reconstruction—$133 billion, more than Washington spent, adjusted for inflation, on the entire Marshal Plan for the reconstruction of Western Europe after the Second World War. As the interviews make clear, this money went largely into the pockets of corrupt Afghan politicians and contractors and to fund projects that were neither needed nor wanted by the Afghan people.

The US National Endowment for Democracy’s former senior program officer for Afghanistan told his interviewers that Afghans with whom he had worked “were in favor of a socialist or communist approach because that’s how they remembered things the last time the system worked”, i.e., before the 1980s CIA-backed Islamist insurgency that toppled a Soviet-backed government and unleashed a protracted civil war that claimed the lives of over a million. He also blamed the failure of US reconstruction efforts on a “dogmatic adherence to free-market principles”.

An Army colonel who advised three top US commanders in Afghanistan told the interviewers that, by 2006, the US-backed puppet government in Kabul had “self-organized into a kleptocracy.”

US military personnel engaged in what has supposedly been a core mission of training Afghan security forces to be able to fight on their own to defend the corrupt US-backed regime in Kabul were scathing in their assessments.

A special forces officer told interviewers that the Afghan police whom his troops had trained were “awful—the bottom of the barrel in the country that is already at the bottom of the barrel”, estimating that one-third of the recruits were “drug addicts or Taliban.” Another US adviser said that the Afghans that he worked with “reeked of jet fuel” because they were constantly smuggling it out of the base to sell on the black market.

Faced with the continuing failure of its attempts to quell the insurgency in Afghanistan and create a viable US-backed regime and army, US officials lied. Every president and his top military commanders, from Bush to Obama to Trump, insisted that “progress” was being made and the US was winning the war, or, as Trump put it during his lightning Thanksgiving trip in and out of Afghanistan, was “victorious on the battlefield”.

The liars in the White House and the Pentagon demanded supporting lies from those on the ground in Afghanistan. “Surveys, for instance, were totally unreliable, but reinforced that everything we were doing was right and we became a self-licking ice cream cone,” an Army counterinsurgency adviser to the Afghanistan commanders told SIGAR.

A National Security Council official explained that every reversal was spun into a sign of “progress”: “For example, attacks are getting worse? ‘That’s because there are more targets for them to fire at, so more attacks are a false indicator of instability.’ Then, three months later, attacks are still getting worse? ‘It’s because the Taliban are getting desperate, so it’s actually an indicator that we’re winning.’” The purpose of these lies was to justify the continued deployment of US troops and the continued carnage in Afghanistan.

Today, the carnage is only escalating. According to the United Nations, last year 3,804 Afghan civilians were killed in the war, the highest number since the UN began counting casualties over a decade ago. US airstrikes have also been rising to an all-time high, killing 579 civilians in the first 10 months of this year, a third more than in 2018.

The lies exposed by the SIGAR interviews have been echoed by a pliant corporate media that has paid scant attention to the longest war in US history. The most extensive exposure of US war crimes in Afghanistan came in 2010, based on some 91,000 secret documents provided by the courageous US Army whistleblower Chelsea Manning to WikiLeaks. Julian Assange, the founder of WikiLeaks, is now being held in Britain’s maximum security Belmarsh Prison facing extradition to the United States on Espionage Act charges that carry a penalty of life imprisonment or worse for the “crime” of exposing these war crimes. Manning is herself imprisoned in US Federal detention center in Virginia for refusing to testify against Assange.

On October 9, 2001, two days after Washington launched its now 18-year-long war on Afghanistan and amid a furor of war propaganda from the US government and the corporate media, the World Socialist Web Site posted a statement titled “Why we oppose the war in Afghanistan.” It exposed the lie that this was a “war for justice and the security of the American people against terrorism” and insisted that “the present action by the United States is an imperialist war” in which Washington aimed to “establish a new political framework within which it will exert hegemonic control” over not only Afghanistan, but over the broader region of Central Asia, “home to the second largest deposit of proven reserves of petroleum and natural gas in the world.”

The WSWS stated at the time: “The United States stands at a turning point. The government admits it has embarked on a war of indefinite scale and duration. What is taking place is the militarization of American society under conditions of a deepening social crisis.

“The war will profoundly affect the conditions of the American and international working class. Imperialism threatens mankind at the beginning of the twenty-first century with a repetition on a more horrific scale of the tragedies of the twentieth. More than ever, imperialism and its depredations raise the necessity for the international unity of the working class and the struggle for socialism.”

These warnings have been borne out entirely by the criminal and tragic events of the last 18 years, even as the Washington Post now finds itself compelled to admit the bankruptcy of the entire sordid intervention in Afghanistan that it previously supported.

The US debacle in Afghanistan is only the antechamber of a far more dangerous eruption of US militarism, as Washington shifts its global strategy from the “war on terrorism” to preparation for war against its “great power” rivals, in the first instance, nuclear-armed China and Russia.

Opposition to war and the defense of democratic rights—posed most sharply in the fight for the freedom of Julian Assange and Chelsea Manning—must be guided by a global strategy that consciously links this fight to the growing eruption of social struggles of the international working class against capitalist exploitation and political oppression.

10 thoughts on “Afghanistan Papers, how the US government lied”