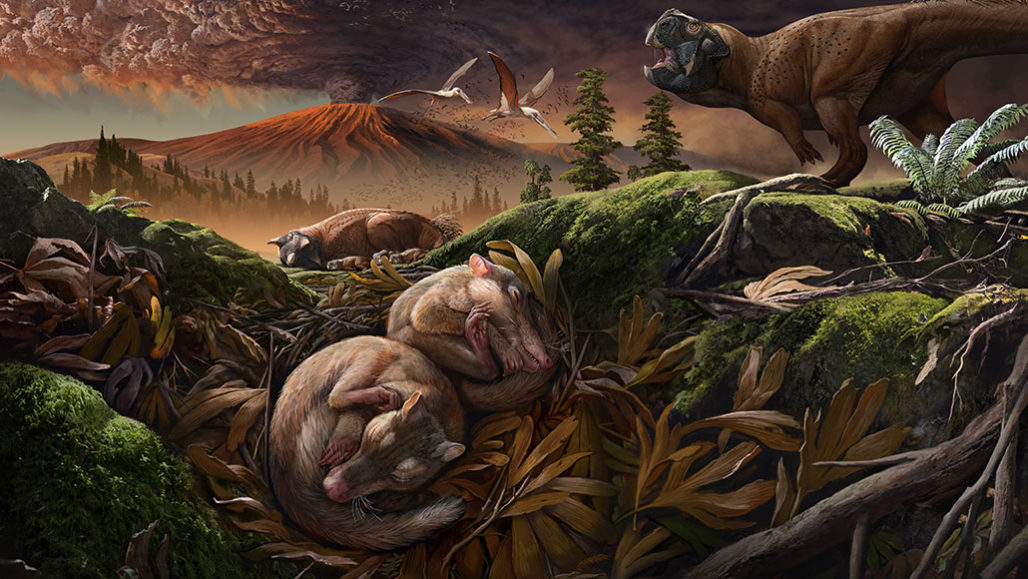 How early the hammer, anvil and stirrup arose has been hard to pin down

Exceptionally preserved skulls of a mammal that lived alongside the dinosaurs may be offering scientists a glimpse into the evolution of the middle ear.

The separation of the three tiny middle ear bones — known popularly as the hammer, anvil and stirrup — from the jaw is a defining characteristic of mammals. The evolutionary shift of those tiny bones, which started out as joints in ancient reptilian jaws and ultimately split from the jaw completely, gave mammals greater sensitivity to sound, particularly at higher frequencies (SN: 3/20/07). But finding well-preserved skulls from ancient mammals that can help reveal the timing of this separation is a challenge.

Now, scientists have six specimens — four nearly complete skeletons and two fragmented specimens — of a newly described, shrew-sized critter dubbed Origolestes lii that lived about 123 million years ago. O. lii was part of the Jehol Biota, an ecosystem of ancient wetlands-dwellers that thrived between 133 million and 120 million years ago in what’s now northeastern China.

The skulls on the nearly complete skeletons were so well-preserved that they were able to be examined in 3-D, say paleontologist Fangyuan Mao of the Chinese Academy of Sciences in Beijing and colleagues. That analysis suggests that O. lii’s middle ear bones were fully separated from its jaw, the team reports online December 5 in Science.

Fossils from an older, extinct line of mammals have shown separated middle ear bones, but this newfound species would be the first of a more recent lineage to exhibit this evolutionary advance.

O. lii apparently moved its jaw both in side-to-side and in rolling motions as it chewed. Such chewing ability, the team says, may have played a role in the evolutionary separation of the jaw and middle ear bones.

“This paper describes a spectacular fossil,” says vertebrate paleontologist Zhe-Xi Luo of the University of Chicago, who was not involved in the new study. But he’s not convinced that O. lii represents an evolutionary leap forward in mammalian ear evolution.

Luo notes that O. lii is closely related to the mammal genus Maotherium, which lived around the same time and in roughly the same location. In Science in July, Luo and colleagues reported that a new analysis of Maotherium revealed that its middle ear bones were still connected to its jawbones by a strip of cartilage (SN: 7/18/19).

That finding, Luo says, was expected. Maotherium is well-known as a transitional organism, in which the middle ear bones had begun to rotate away from the jaw but were still loosely connected by that cartilage. There are numerous branches and twigs on the mammal family tree, Luo says, and evolution occurred at a different pace on them. But, he says, it’s unlikely that O. lii would have had separated ear bones when Maotherium didn’t, given the pair’s close positioning on the tree.

Luo says he also doesn’t find the study’s evidence that the separation was complete in O. lii convincing. Three of the four skulls in the study were missing all or part of the middle ear, and the gap between the middle ear bones and jaw in the fourth skull may have been a break that occurred during fossilization, he adds.

However, the new study’s researchers reject this idea. “It’s common that different interpretations may exist for a discovery in paleontology,” says vertebrate paleontologist Jin Meng of the American Museum of Natural History in New York, a co-author of the study.

But, Meng says, none of the ear bones or the cartilage in any of the skulls show fractured or broken edges. That, he says, suggests that these features were already separated in the animals before their demise.