Ongoing protests in the capital of Santiago, as the country’s authorities continue to find a way out of the week-long crisis. Santiago Governor Karla Rubilar said a million people marched in the capital – more than five percent of the country’s population. Protesters elsewhere took to the streets in every major Chilean city.

A million people took to the streets in the Chilean capital Santiago to protest against the government. That is the highest number since more than a week ago when the protests broke out in the South American country.

The protest was peaceful last night. Protesters walked a protest march through the streets of Santiago with Chilean flags. They demand that the government do more against inequality in the country and the high cost of living. People took to the streets not only in the capital, but also in other cities there were protests. 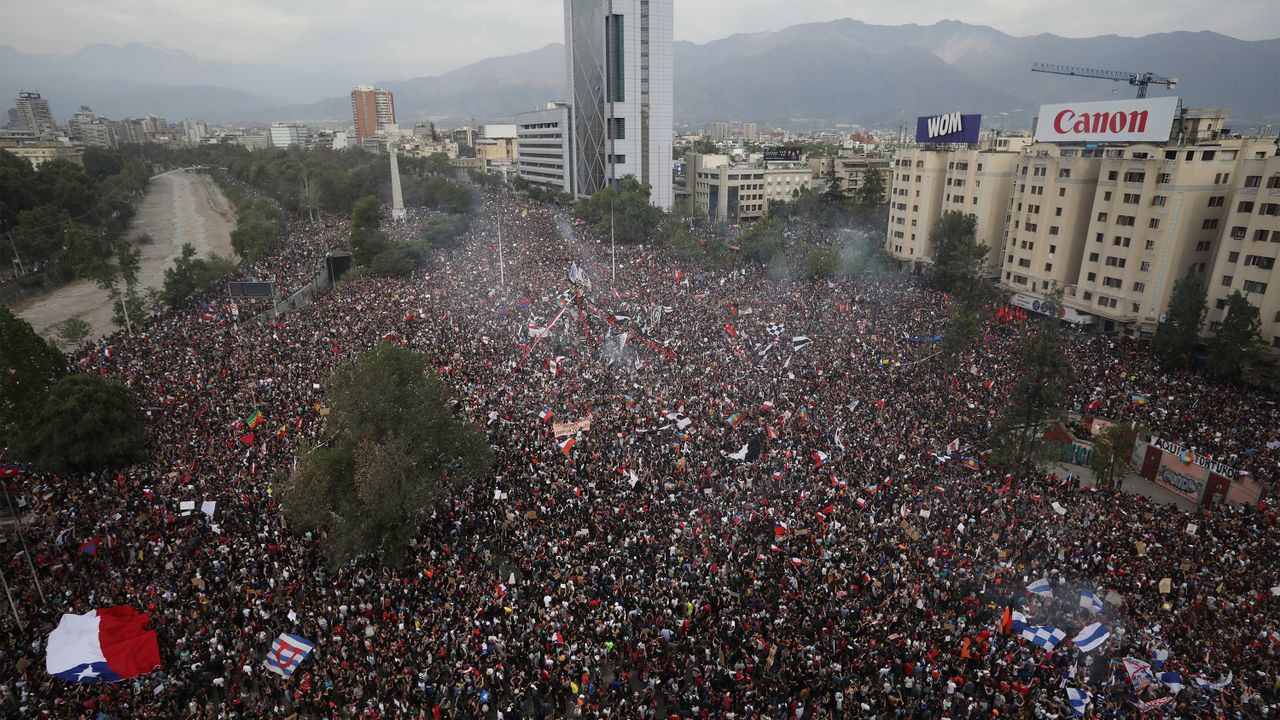 Millions of people protesting social inequality and state violence poured into the streets across Chile yesterday in the largest demonstrations in the country’s history.

Stunned Chilean television commenters described the scene as a “human sea”, an “interminable column” and a “carnival of people”, though few were watching the reports because half the adult population of the country was already in the streets. Over one million people descended on Santiago’s Plaza Italia while protestors filled every city in the country.

With yesterday’s demonstrations, the floodtide of international working class struggle rose higher amid a week of explosive social protest. Across the world, workers and youth of all races are demonstrating with the same basic demand: social equality.

In Iraq, the government killed at least 30 people yesterday as protests swelled in Baghdad and in the industrial south. In the African nation of Guinea, one million people marched Thursday against an extension of the president’s term in office. Protests are ongoing in Lebanon, and Haiti while last week saw mass turnouts in Barcelona, Spain and Ecuador.

The working class stood at the head of yesterday’s protests in Chile, with overwhelming participation reported among teachers, miners, dockworkers and other critical sectors.

Truck drivers and taxi drivers blocked the country’s highways and toll roads yesterday and bus drivers walked off the job in Santiago after police murdered a protesting bus driver. Middle school, high school and university youth marched under their school banners across the country. A mile-long caravan of motorcyclists drove through Santiago. Hackers claimed to have published the personal information of every member of the hated Carabinero police.

The demonstrations were not called by any political party and Chilean reporters noted the absence of any party flags or banners in the crowds. …

The 20,000 police and military deployed to the streets in the ongoing state of emergency initially pulled back to guard critical government buildings, but began attacking protestors in front of the presidential palace La Moneda in mid-evening. Soon after, the military began deploying to enforce the curfew and were confronted in some locations by angry demonstrators.

Reports are emerging of horrific torture at the hands of the Chilean police and military. Yesterday, the Chilean National Institute of Human Rights (INDH) reported that police have arrested 5,500 people in more than a week of ongoing protest.

A legal complaint filed by the INDH shows that in a working class suburb of Santiago four people “were ‘crucified’ on a metal antenna at the police station, hanged by their handcuffs” and beaten. There are widespread reports of rape, sexual abuse and violent beatings. There are 19 dead and hundreds injured, 123 people by police and military gunshot alone.

The police and military are preparing for a massive crackdown. Yesterday, the military called up reservists from the country’s provinces to perform administrative duties that will facilitate the deployment of 15,000 more soldiers to the streets.

Just 46 years ago after the coup of September 11, 1973, the Chilean armed forces drowned the workers’ movement in blood, killing thousands and torturing thousands more. Thousands of children of murdered left-wing militants were adopted to overseas couples. Tens of thousands more were brutally beaten in prison.

The size of yesterday’s demonstration in Chile, in which many family members of Pinochet’s victims participated, shows the masses of working people want a reckoning with the historical crimes of the Chilean ruling class and military, for which no one has ever been held to account. Pinochet himself died in freedom after the British Labour Party

twenty years ago blocked his extradition to Spain for prosecution.

The demonstrators’ chant—“This isn’t about 30 pesos, it’s about 30 years”—testifies to the desire on the part of millions to fight the whole political establishment responsible for papering over the crimes of the dictatorship, preserving the power of the Chilean military and maintaining capitalist rule in the so-called transition to democracy that began in the late 1980s.

What is … required is to unleash the immense power of the independent international working class. This struggle can be developed through the establishment of popular assemblies and workers’ committees in all the factories, mines and workplaces throughout the country, aimed at mobilizing the independent strength of the working class in a struggle against the world capitalist system.

13 thoughts on “Millions of Chileans demonstrate for equality”