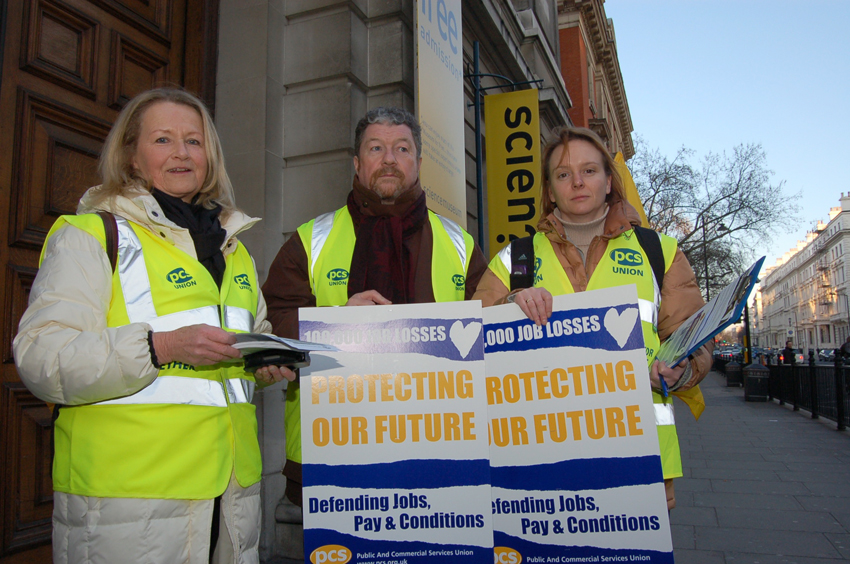 This photo shows workers outside the Science Museum in South Kensington, London, England on a previous strike to defend wages and other conditions. Their pay has been cut by austerity.

A group of Prospect union workers gathered outside the Science Museum, waving flags, brandishing banners and chanting for ‘fair pay’.

Industrial action has been taken by members of the Prospect union, which said 25% of Science Museum employees earn less than the ‘London Living Wage’.

The pay dispute also involves the National Science and Media Museum in Bradford, the Museum of Science and Industry in Manchester, Blythe House in London and the National Collections Centre in Wroughton, Wiltshire.

The Prospect Union said a series of pay rises below the rate of inflation had left workers with a ‘significant’ real terms pay cut of 10% since 2011.

‘Our members in the Science Museum Group love their jobs but they cannot carry on with year after year of uncertainty and real-terms pay cuts,’ said Prospect negotiator Sharon Brown.

‘Science Museum Group has some of the highest-profile museums in the country and it is ludicrous that they won’t just start paying all their workers enough to live on and commit to doing so in the future.’