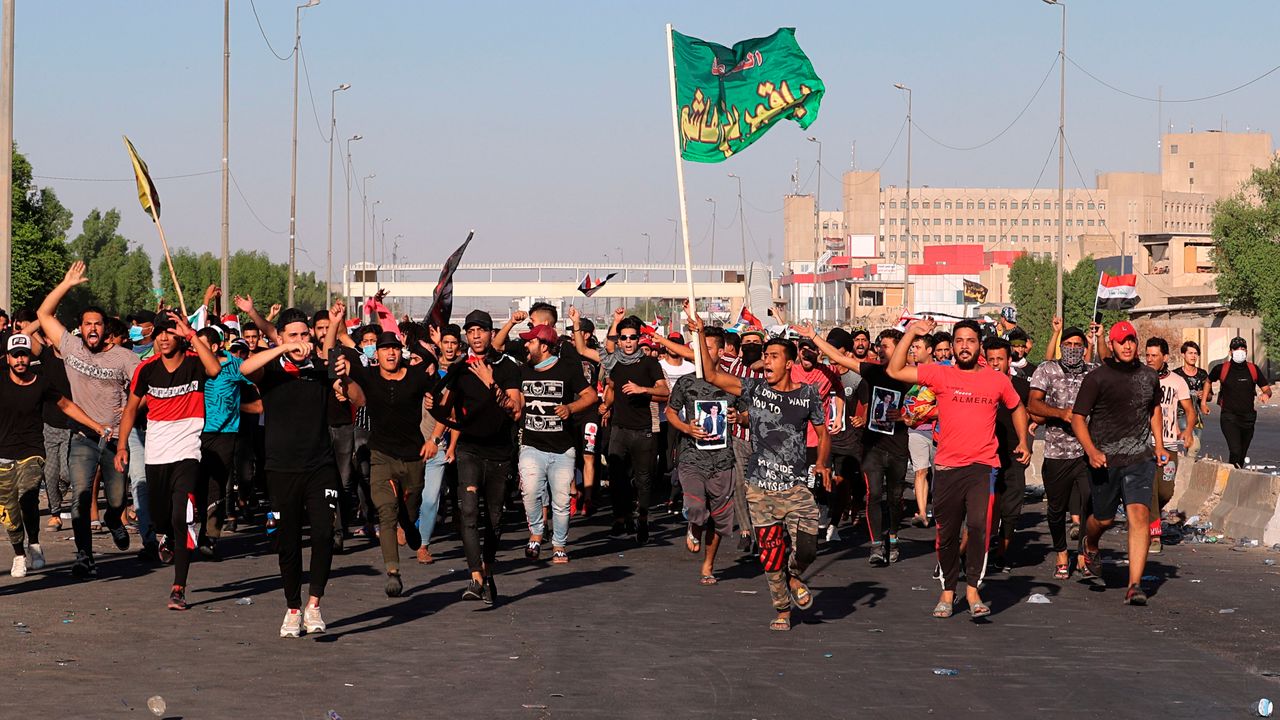 Iraqi security forces opened fire on unarmed civilians for the fourth day in a row Friday as protesters poured into the streets once again in defiance of Prime Minister Adel Abdul Mahdi’s declaration of a round-the-clock curfew.

The death toll was reported at 65 Friday night, with more expected to be killed in overnight clashes. The real number of dead is undoubtedly far higher. The number of wounded, from live ammunition, rubber bullets, tear gas and water cannon, has been reported at over 1,500.

Heavily armed soldiers, members of Iraq’s elite counterterrorism squads and riot police have been deployed in an attempt to prevent demonstrators from marching on central Baghdad’s Tahrir Square and on the Green Zone, the heavily fortified center of the Iraqi government, the US and other Western embassies and the various military contractors hired to prop up the regime. Snipers on rooftops have been deployed to pick off protesters.

The government has shut down the internet across Iraq in its bid to suppress the organization of fresh protests. There have also been reports of masked death squads going to the homes of known activists and assassinating them.

Thus far, these repressive measures have proved counterproductive, with every state killing fueling the popular anger against the government. Unrest has gripped the impoverished Shia neighborhoods of Sadr City, where more than a decade ago militias confronted American troops. Crowds there reportedly have set fire to government buildings as well as the offices of Shia-based parties that support the government.

The protests, which have demanded jobs, improved living conditions and an end to corruption, are the largest and most widespread that have broken out in Iraq in the more than 16 years since Washington launched its war to topple the government of Saddam Hussein.

Most of those confronting US-trained security forces in the streets are unemployed youth and young workers whose entire lives have been shaped by the criminal US war of aggression, the subsequent eight years of US occupation and the bitter sectarian conflicts instigated by Washington as part of its divide-and-rule strategy.

The effects of the US war amounted to sociocide, i.e., the systematic destruction of an entire society. The number of Iraqis who lost their lives due to the war is estimated at well over a million. What had been among the most advanced healthcare, education and social welfare systems in the Middle East were demolished, along with the bulk of the country’s infrastructure.

Washington launched the 2003 invasion based on lies about “weapons of mass destruction” and the predatory conception that by militarily conquering Iraq it could seize control of the vast energy resources of the Middle East and thereby offset the decline of US imperialism’s global hegemony.

The Iraq war, however, just like the US-organized wars for regime change in Libya and Syria, resulted in a debacle. Within three years of withdrawing most of US troops from Iraq, the Obama administration began sending another 5,000 back in to wage the so-called war against ISIS, which reduced the predominantly Sunni cities of Anbar province and Mosul, Iraq’s second largest city, to rubble.

Having spent trillions of dollars and sacrificed the lives of 4,500 troops—along with tens of thousands of wounded—Washington has proved utterly incapable of establishing a stable US puppet regime in Baghdad.

The current prime minister, Abdul Mahdi, is typical of the politically bankrupt bourgeois politicians that the US war and occupation brought to the fore. Initially a [Saddam Hussein] Ba’athist, he became a leading member of the Iraqi Communist Party before switching his allegiance while in exile to the Islamist ideology of Iran’s Ayatollah Khomeini. Finally, he found his way into the puppet regime erected by the Americans in 2004 as its “finance minister”.

Attempting to rule Iraq on the basis of sectarian politics, these elements have succeeded only in looting the country of hundreds of billions of dollars. They have failed to provide either jobs, essential services such as water and electricity, or the reconstruction of the country’s shattered infrastructure.

In the same speech in which he announced the round-the-clock curfew, Prime Minister Abdul Mahdi insisted that there was no “magic solution” to resolve the demands of the youthful demonstrators.

The demonstrators know, however, that Iraq, which boasts the fifth largest crude oil reserves in the world, is taking in more than $6 billion in oil revenues every month, and that the lion’s share of this wealth is flowing into the hands of foreign capitalists and a narrow Iraqi financial elite, along with corrupt politicians and their cronies. There is nothing “magical” in understanding that, placed under the control of Iraqi working people, this vast wealth could be used to meet the desperate social needs of tens of millions.

The protests have shaken the regime to its core precisely because they are centered in the country’s majority Shia population, the ostensible base of the ruling parties. What is emerging in Iraq as elsewhere in the Middle East is the resurgence of the class struggle in opposition to the sectarianism and repression through which imperialism and national ruling cliques have dominated the region.

This social eruption is part of a broader movement that has seen protests against Gen. Sisi’s police-state dictatorship in Egypt, mass demonstrations against IMF-style austerity measures in Lebanon and the more than month-old strike by 146,000 teachers against the Jordanian government.

These struggles are exposing once again the political bankruptcy of the national bourgeoisie, not only in Iraq, but throughout the Arab world. From the Ba’athist regimes of Saddam Hussein and Bashar al-Assad, to outright stooges like Abdul Mahdi and Sisi, this class has proven organically incapable of resolving any of the democratic and social demands of the Arab masses or establishing any genuine independence from imperialism.

Taking place against the backdrop of the rising threat of yet another US imperialist war, this time against Iran, it is noteworthy that the upheavals in Iraq have been met with undisguised hostility in both Washington and Tehran.

Iranian officials have suggested that these mass protests against unemployment, intolerable living conditions and government corruption are the work of “infiltrators” backed by a combination of the US, Israel and Saudi Arabia. Clearly, the bourgeois-clerical rulers of the Islamic Republic fear that the revolt in Iraq can serve as a spark to reignite the mass protests of the Iranian working class that broke out in 2017-18 against unemployment, falling living standards, and sweeping social cuts.

For its part, the US State Department has issued a pro forma declaration affirming the right to protest in the abstract, while deploring “violence”—by the demonstrators, not the security forces—and appealing for “calm”. Meanwhile, the US corporate media has largely ignored the mass protests and the Iraqi regime’s bloody repression.

One need only imagine the response of the “human rights” imperialists to the gunning down of scores of demonstrators in Iran, Venezuela, Russia or any other country targeted by Washington for regime change. In the case of Iraq, however, US imperialism desperately fears that the revolutionary intervention of the masses will cut across its war aims.

The mass social upsurge in Iraq—widely seen as a potential battleground for a US war against Iran—points to the only way forward in stopping a new and more terrible war in the Middle East, and with it the threat of a global conflagration.

It is the struggle of the working class against capitalism, in Iraq, the broader Middle East, the United States and internationally, that provides the foundation for the emergence of a new mass antiwar movement. This movement must be armed with a program of socialist internationalism to unify workers all over the world to put an end to the source of war, social inequality and dictatorship: the capitalist system.

This photo shows anti-government protesters looking toward the protest site area, blocked with concrete walls by Iraqi security forces in Baghdad. That is at the infamous ‘Green Zone‘ in Baghdad; where the infamous supersize United States embassy is.

By Ben Chako in Britain:

IRAQI communists have denounced “acts of repression and violence” against protesters demanding jobs, better public services and an end to corruption, as the death toll from this week’s demonstrations rose to 42.

The Communist Party of Iraq’s political committee said that the unrest exploding in cities across the country was “a warning to the government that is responsible for the tragic situation and the dire living conditions of citizens.”

It called for fundamental reforms including an end to the sectarian “power-sharing quota” system of government, which “does not lead to any solutions but rather perpetuates and exacerbates crises.”

The communists also pressed for a commission of inquiry to probe the violence, an immediate order to security forces to “stop pursuing the wounded into hospital” and for Prime Minister Adel Abdul-Mahdi and the head of the army to be summoned to an extraordinary session of parliament to explain themselves.

Party members would continue to participate in the protests and would strive to ensure that they stayed peaceful despite state violence, it said.

Mr Abdul-Mahdi called on protesters yesterday to go home, saying that the government had listened to their “legitimate demands”, but he inflamed anger by describing the state violence that has killed scores as “bitter medicine” that was “inevitable.”

He said he would not make “empty promises” but added that the government would work towards a basic income law.

Internet access has been shut off but was briefly restored before his speech, before being shut off again as news and reports of new protests began to spread.

But demonstrators continued to gather in Baghdad’s Tahrir Square despite the call — with police firing live bullets into the crowds.

And protesters in the south-eastern city of Nasiriyah, which has seen the worst violence with 24 protesters and a police officer killed, vowed that they would not give up.

“If the government is not dissolved, we will avenge our martyrs,” an unemployed 32-year-old named Hamid said.

Iraq’s most senior Shi’ite cleric Grand Ayatollah Ali al-Sistani slammed the government and its political rivals for failing to “fulfil the people’s demand — to fight corruption.”