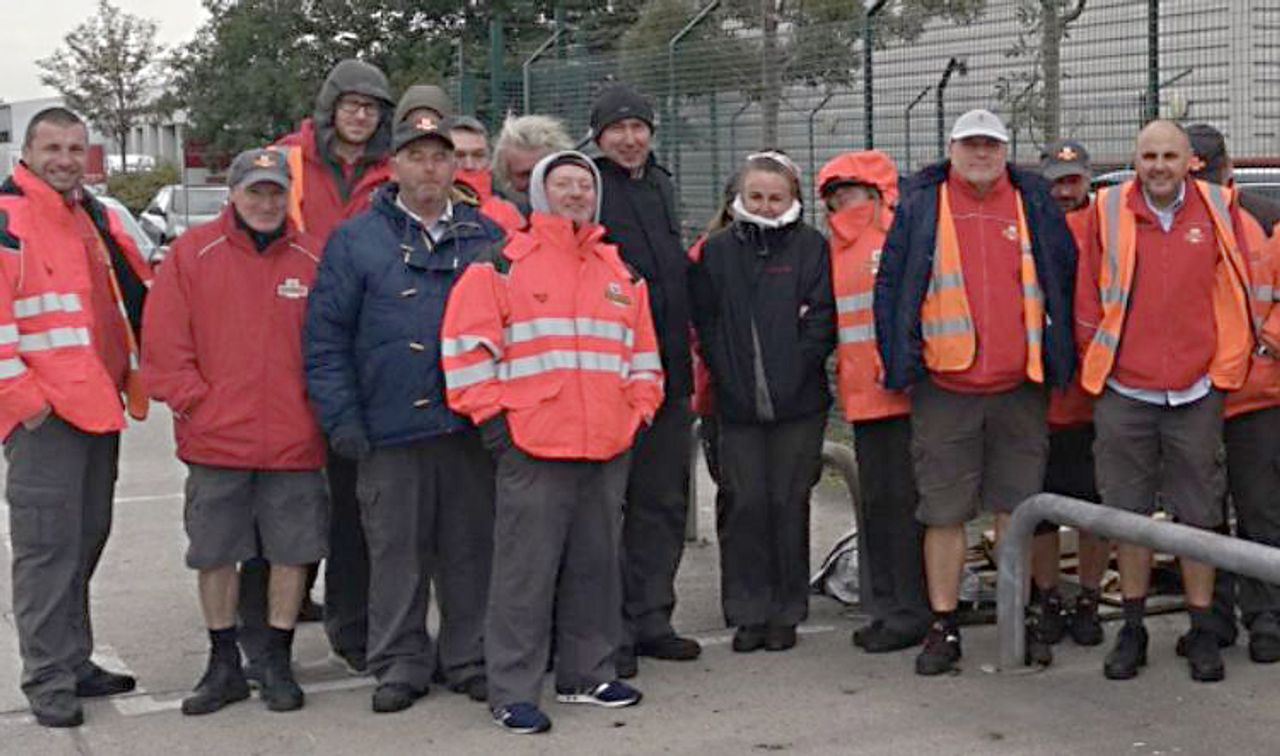 By Laura Tiernan in England:

Royal Mail postal workers in Merseyside walked off the job Tuesday to protest a racist comment against a Muslim co-worker. The solidarity action continued yesterday with a picket outside company headquarters in Bootle.

According to a report in the Liverpool Echo, a manager insulted a Muslim worker at the Royal Mail sorting and delivery office in Bootle and Seaforth. The popular staff member was said to be “very upset” and fellow workers quickly demonstrated their support with an “unofficial” wildcat walk-out.

Around 50 workers picketed and continued their action yesterday in a powerful reply to the nationalist climate promoted by the ruling class and its political servants and media over Brexit. Eton-educated Prime Minister Boris Johnson has sought to incite backward anti-Muslim prejudice, describing veiled women as “bank robbers” and “letter boxes”, but Royal Mail workers have advanced an opposing principle: class solidarity.

Workers stood firm yesterday despite management declaring their action was “unballoted” and therefore illegal. Under the Trade Union Act 2016, staff can only strike after a bureaucratic and secret ballot process aimed at suppressing industrial action. The anti-union laws build on those introduced by the hated Thatcher government and are routinely cited by union officials to stifle workplace grievances, strikes and secondary boycotts.

Management stated, “We are disappointed that unballoted industrial action is taking place … Royal Mail is fully committed to resolving our colleagues’ concerns in co-operation with the Communication Workers Union (CWU).”

In the comments section of the Liverpool Echo Tuesday, one Royal Mail worker wrote, “Given the behaviour and bullying culture among RM management I’d speculate that this comment was simply the breaking point … if you dare speak up for yourself or refuse to put work before anything else such as looking after your children or your health then you will become the target of prolonged and insidious harassment.”

In Nottingham, postal workers at the Glaisdale delivery office will be balloted for strike action over a colleague sacked in August. Ian Green, a postman for 15 years, was accused of “aggressive” behaviour when lodging a complaint over working conditions. Green’s colleagues believe he was sacked because he challenged management.

The Merseyside strike takes place as nationwide balloting concludes among Royal Mail’s 120,000-strong workforce. The ballot is certain to deliver an overwhelming strike vote with anger at boiling point over a new round of restructuring and job losses.

As the World Socialist Web Site explained last month, “RMG’s [Royal Mail Group’s] intention is to increase profitability through a five-year restructuring plan aimed at splitting its Parcelforce parcel delivery from the traditional postal service. Postal workers face the introduction of ‘gig economy’ conditions prevailing across the parcel delivery industry, while a planned review of the Universal Service Obligation threatens six-day week postal deliveries and could lead to the axing of as many as 20,000 jobs.”

The opposition among Royal Mail workers must be unified into a powerful industrial and political offensive to oppose the diktats of a management hell bent on subordinating postal services and the livelihoods of workers to the interests of corporate shareholders.

Tuesday’s walkout has been met with media censorship—only the Liverpool Echo reported the strike. This is due to fears that publicity could encourage similar strikes at Royal Mail but also throughout transport, education, the National Health Service and across the logistics industry, including Amazon.

CWU General Secretary Dave Ward tweeted of the strike, “A new era of trade unionism is being born and we stand at the forefront of it.”