This 18 September 2019 video from Flint, USA says about itself:

Why GM UAW Workers are on Strike

A look at what’s behind the United Auto Workers nationwide strike against General Motors.

By Genevieve Leigh in the USA:

“The CEOs and Wall Street are trying to take your wages and benefits… Don’t Give in. Stand your ground!”

The International Youth and Students for Social Equality at Wayne State University in Detroit spoke to students Monday about the 48,000 General Motors workers who are entering their third week of strike action against the giant transnational corporation and how students can support them.

The IYSSE explained to students that workers are striking in opposition to the demands by GM for deep increases in workers’ out-of-pocket expenses for health care, from the current three percent to 15 percent, and an expansion of low-paid temporary and contract workers.

One freshman finance student addressed himself to the striking workers, saying, “Do not give up your wages and benefits to the corporations,” and denounced the “war on workers and the new generation of workers.” The CEOs and Wall Street, he said, “are trying to take your wages and your benefits and everything you’ve worked hard for. Don’t let them take it away from you. Don’t give in. Stand your ground.”

Angel, a second-year interior design student, told the IYSSE he thinks every worker deserves “not just a decent job but a good job. One with good healthcare, a livable wage and safe working conditions.” IYSSE members emphasized that among the chief demands raised by the older generation of autoworkers was the abolition of the hated multi-tier wage system, which pays new hires half the wage of senior worker, as well as the conversion into full-time employees of all “Temporary Part-Time” workers or TPTs, who can work for years without any set hours or job security.

Angel told us he supports the autoworkers’ fight and thinks all of the major issues workers and youth face today are related. “I think climate change is a major issue. Sometimes I hear people saying that it’s the people’s fault for not recycling or whatever but then you look at these massive companies like GM and I think c’mon, they are the real problem.” 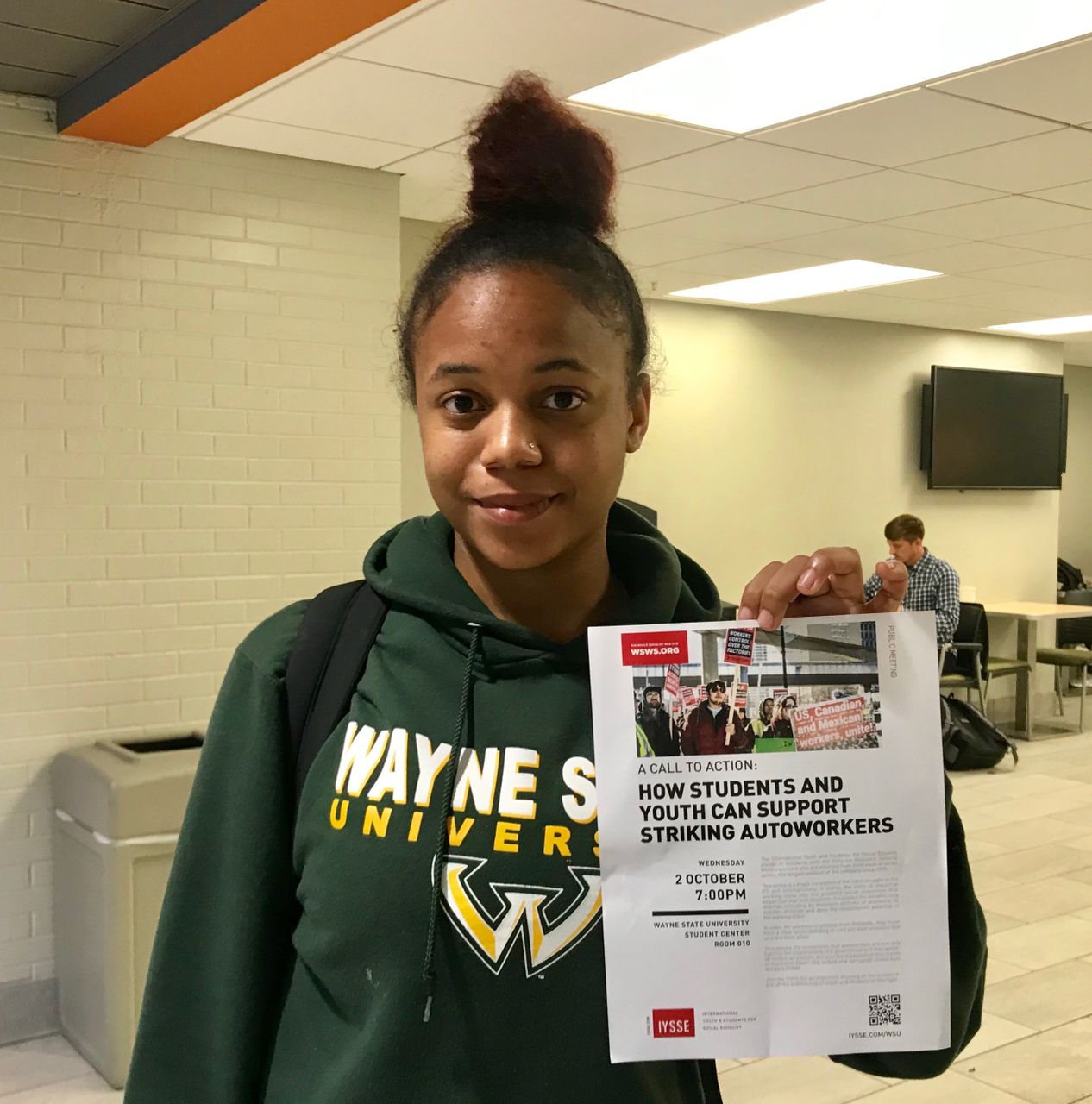 Angel also supported the GM workers in Silao, Mexico who have been fired for courageously refusing to take on extra work while GM workers in the US are on strike. “It’s not right that they were fired. Workers should have the right to speak out; the freedom of speech is the most basic of rights, it is fundamental.”

Another second-year WSU student told us she thinks the strike is “an incredible demonstration of bravery and integrity to be standing up, not just for GM workers but for workers all over the world.” She went on to explain that this fight is critical for young people: “It is important that the younger generation be aware of the fact that all the institutions, and everything we have built can be changed and should be changed to better accommodate the future ahead of us.”

Regarding the victimized Mexican workers, she added, “I give twice as much credit to the Mexican workers. I’m not from Mexico but I can imagine how much more pressure is put on them from the US corporations. The fact that they are sticking to their principles really demonstrates a lot of character.”

Two students visited the IYSSE table who live nearby some of the local auto plants: Mohammed is from Warren, Michigan where GM just shut a transmission plant, and Mahnaz is from Hamtramck, home of GM’s Detroit-Hamtramck plant, which is slated to close in January.

Both freshmen, the students expressed their full support for the striking autoworkers. Muhammed said, “These big corporations only care about mass production so they can make mass profits. I don’t think they have any idea, or even care what effect it has on the workers.” 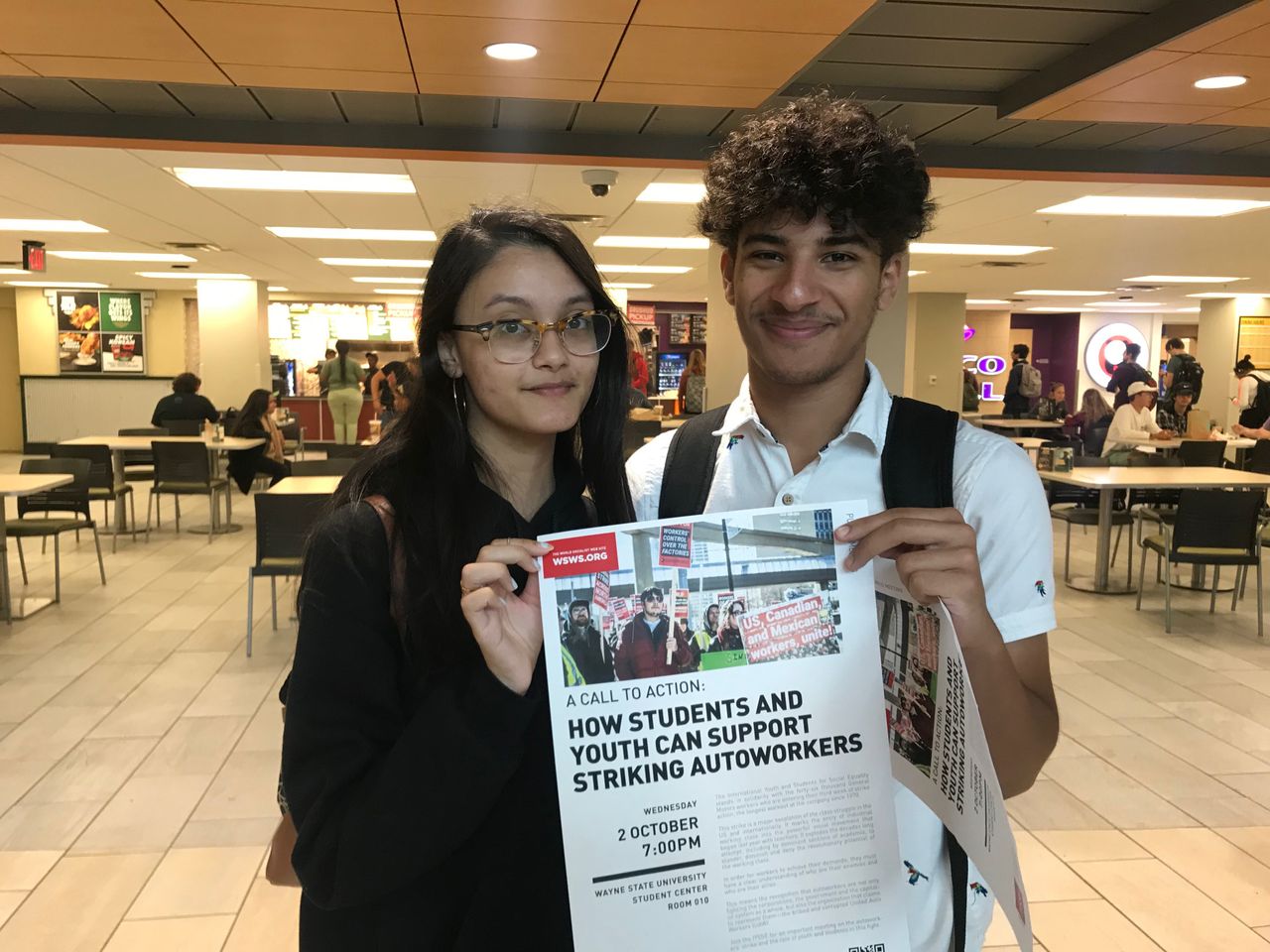 Mahnaz added: “These companies make billions but so many of them pay their workers ridiculously low wages.” After learning about the conditions facing new contract workers in the auto factories, she commented, “What am I going to do with $12 hour? Don’t try to tell me that’s enough to live.” Mahnaz, who is a biology major, agreed that the autoworker struggle would have ramifications for the entire working class. “We need to stop these companies from destroying workers’ lives and the planet.”

The IYSSE members explained that supporting the GM strikes entailed more than just cheering them on. Workers, they said, needed to be told the truth. They were in a fight not only against GM but the capitalist system and both big-business parties, including the Democrats which imposed the conditions GM workers are fighting against during the 2009 restructuring of the auto industry by the Obama administration. …

IYSSE members explained that they were fighting for autoworkers to build rank-and-file strike and factory committees … to break through the isolation, expand the strike throughout the industry, and unify all workers in the US and internationally against capitalist exploitation and social inequality.

K’von is a second-year student from Detroit who has family members who work for the Big Three auto companies. “The tiered system they have is completely unfair. We should all get equal pay for doing the same work. No one should be treated differently when it comes to pay; they are doing the same job!” … K’von added that he felt the working class was the most decisive force in society: “The thing we have to remember is that without us, they’ve got nothing, and they know it.”

AMERICAN WORKERS STRIKING IN HUGE NUMBERS U.S. workers continued to throw their weight around in a healthy economy in 2019, recording the largest number of major strikes in the decade. The U.S. saw 25 work stoppages involving at least 1,000 workers last year. That was the most of any year between 2010 and 2019, a time span in which the average was 15. [HuffPost]

According to a report released Tuesday by the federal Bureau of Labor Statistics (BLS), working class struggles in the US are at their highest levels in decades. There were 25 work stoppages involving 1,000 or more workers in 2019. This is the largest number in nearly two decades. Ten of these strikes involved 20,000 or more workers, the largest number since at least 1993, when data on the size of walkouts began to be systematically tracked by the BLS: here.