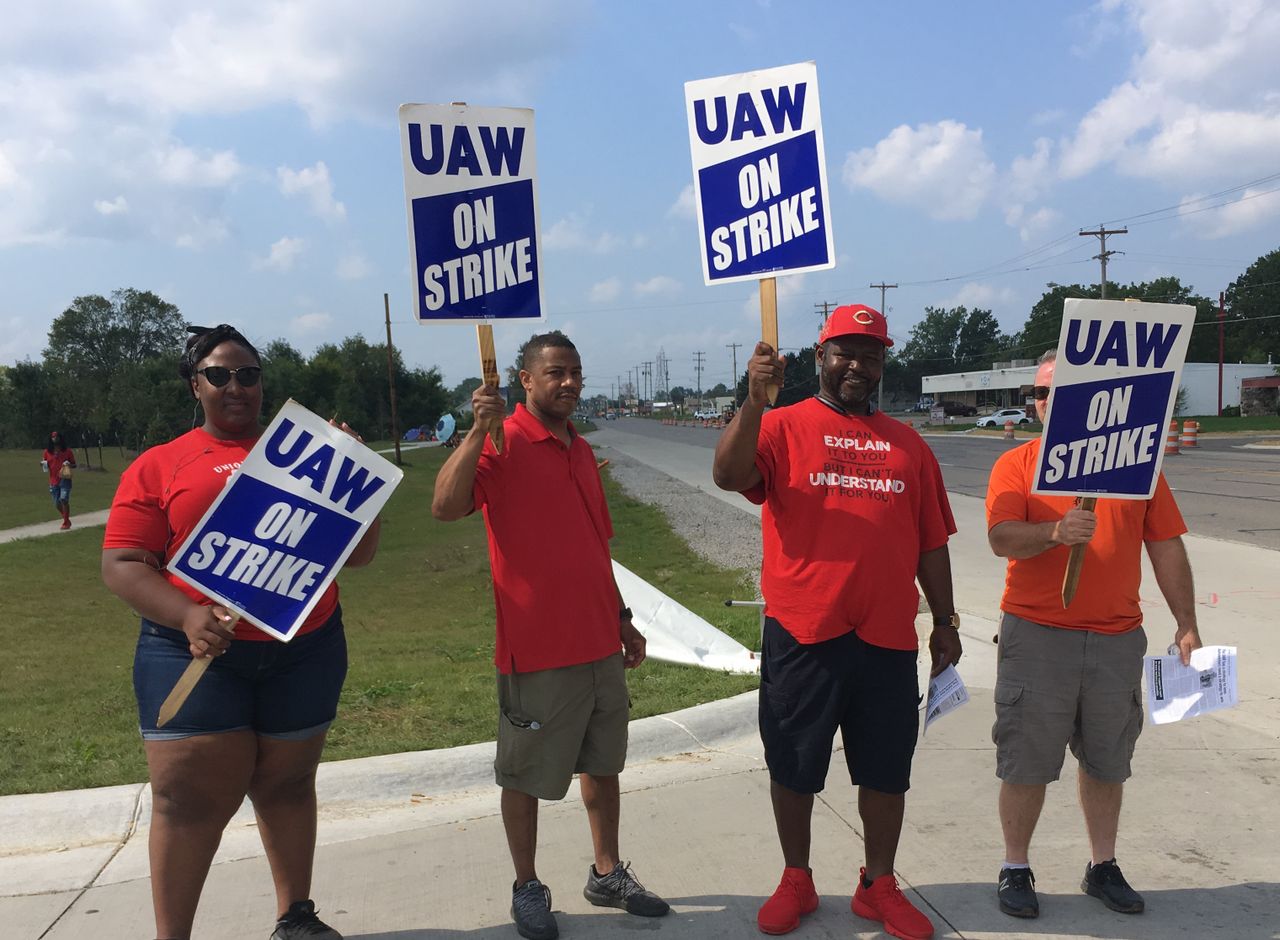 By Sheila Brehm and George Kirby in Flint, USA:

The WSWS Autoworker Newsletter spoke to pickets in Flint, Michigan, over the weekend, as the nationwide strike at GM approached its second week.

Flint, the site of the historic sit-down strike in 1936–1937, is one of the main centers of the GM strike today. Hundreds of workers manned Saturday’s picket lines at Flint Truck Assembly Complex and a distribution facility in nearby Burton. Among their numbers were not only GM workers, but Ford and Chrysler workers, as well as teachers, postal workers and people active in the fight for clean water in the city, an indication of the broad support for the strike in the working class.

Autoworkers on the picket line explained to the Autoworker Newsletter the international dimensions of their struggle. There is “no such thing” as a vehicle produced in one country anymore, Dan, a Flint Truck worker, said. “We get parts from Mexico, China and all over the world. With those parts we build the trucks.”

Dan denounced the firing of GM workers in Silao, Mexico, after they made an appeal for support from American workers. “We make the same truck as they do in Silao, and I think their wages must be very low. I heard about them refusing to increase their production when we went on strike. And now they’re fired? That’s not right.

“I want to thank those workers for their stand and we defend them. It’s a global economy. So I think we need a global strike. We all face the same thing. We’re fighting to get everything back GM took from us.”

Buton, a worker from GM’s CCA (Customer Care and Aftersales) distribution center, said: “We are a distribution facility. We repackage parts for the after-sale market. We handle parts that are made in China, Mexico, Serbia, Italy and all over. And then I guess they’re shipped out all over the world again—to dealerships, car owners and wherever.

“I have no problem supporting Canadian or Mexican workers, we should stand behind them. The Democrats and Republicans claim that these people will have fair rights and wages when that’s not the truth. We’re in a global economy now, we can’t fight in one country. But with the UAW, [they try to create] separation between the Canadian, Mexican & American workers.”

Once the center of GM’s manufacturing empire, Flint has been devastated by decades of plant closures and layoffs. Auto employment has fallen in the city from 80,000 workers forty years ago to little more than 6,000 today. The total population of the city has also declined from 196,000 to 96,000. More than ten percent of the urban landscape consists of empty, contaminated lots marking where auto plants once employed thousands of people.

Former UAW Vice President Norwood Jewell, who pled guilty over the summer for using training center funds to pay for lavish meals and luxury vacations, began as a local UAW official in Flint, where he was reportedly a political “kingmaker”. In 2014 Jewell and the UAW supported the scheme which lead to poisoning of Flint’s water supply as a “cost-saving measure.”

General Motors opened the Burton facility, a $65 million, state of the art warehouse encompassing 25 acres, less than two months ago. The company’s expenses were partially offset by a 50 percent, 12 year tax abatement agreed to by local Democrats, a deal potentially worth millions.

The facility is a model for the “Amazonization” of the entire industry which GM is attempting to impose—a low-wage, highly exploited workforce. Two hundred of the 800 total workers are temps, who earn lower wages and fewer benefits than full-time workers. GM’s ultimate aim is to convert 50 percent of its hourly workforce into temps, according to a former GM executive in 2017.

Temp workers at the site have been working a mandatory seven days a week, ten hours a day. They get only one twenty-minute break and a thirty-minute lunch. This is little better than in Mexico, where assembly workers labor for 12 hours a day—demonstrating the convergence of working conditions across national borders. 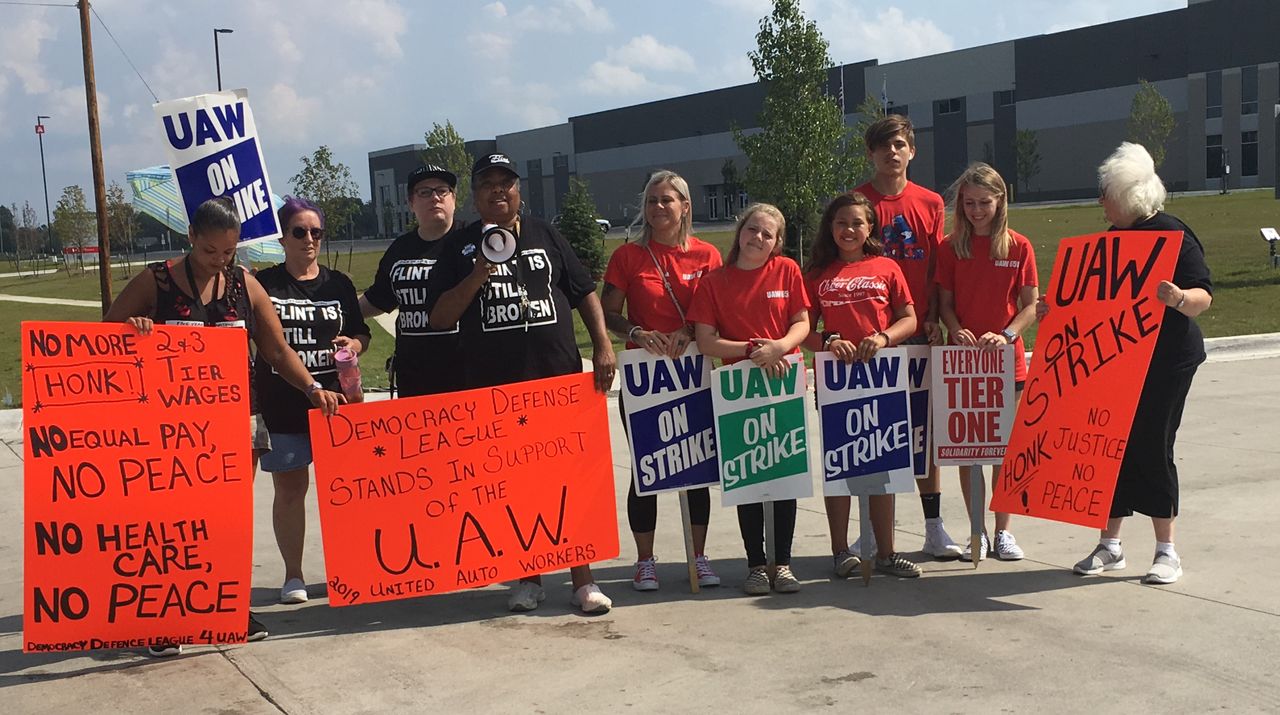 For full-timers, the situation is little better—they work for ten hours each day, six days a week. Prior to the strike, union officials pleaded with workers on Facebook to attend the local union meeting. One worker’s reply summed up the feeling of many, who said: “I’m not coming to the union meeting, because I need to re-introduce myself to my family.”

Full-time workers who spoke to the Autoworker Newsletter expressed enormous sympathy for the temporary workers. “I came from the old CCA plant and have been working with GM for 9 years,” said one second-tier worker. “It’s time we stand up against these powers. I started at $14 an hour during the recession, and I’ve been through three contracts [since then]. We were told $29 an hour from the media instead of what’s on the back end of the contract. They hold a signing bonus in front of workers as a victory [for second-tier workers], then possibly tier 1 health care. That’s good, but what did we lose in the back end of that? Now, we don’t have the right for temps to be hired in.”

Jessica, another full-time worker from the plant, told the WSWS Autoworker Newsletter, “My group was one that took 8 years to get to $18 an hour. I have co-workers filing for bankruptcy, who qualify for state assistance. The janitorial department’s wages top out at $17–18 per hour, with very little benefits. There are some serious problems. I hired in at Delphi in 2006 when starting pay was around $15. We got raises up to a little over $16 an hour and then took a pay cut to $14 [when transferring] into GM.”