This 22 September 2019 video says about itself:

Thousands of people across several Egyptian cities took to the streets on Friday to protest against President Abdel Fattah el Sisi and his regime.

The recent events in Egypt bring back memories of the revolutionary uprisings that brought down the long-standing imperialist-backed Egyptian dictator, Hosni Mubarak, in 2011. Numerous demonstrations reportedly took place throughout Egypt last weekend. This time, they are directed against General Abdel Fatah al-Sisi, who seized power in 2013 and has brutally subjugated the country ever since.

Chants of “Irhal, Irhal” [Leave, Leave], “The people want the overthrow of the regime” or “Say it! Don’t be afraid! Sisi must go” echoed through numerous Egyptian cities over the weekend. The protests began in the capital, Cairo, where on Friday evening several hundred demonstrators gathered on Meidan al-Tahrir, the central square of the Egyptian Revolution.

They quickly spread to other regions, far from the capital. Thousands of mostly young demonstrators took to the streets in the coastal cities of Alexandria and Damietta, in Mansoura and in Suez, the metropolis at the entry of the Suez Canal. So far, there have been no reports of the strikes or factory occupations that spread like wildfire eight years ago. But there were also protests in important industrial cities such as Mahalla al-Kubra, the centre of the Egyptian textile industry in the Nile delta. 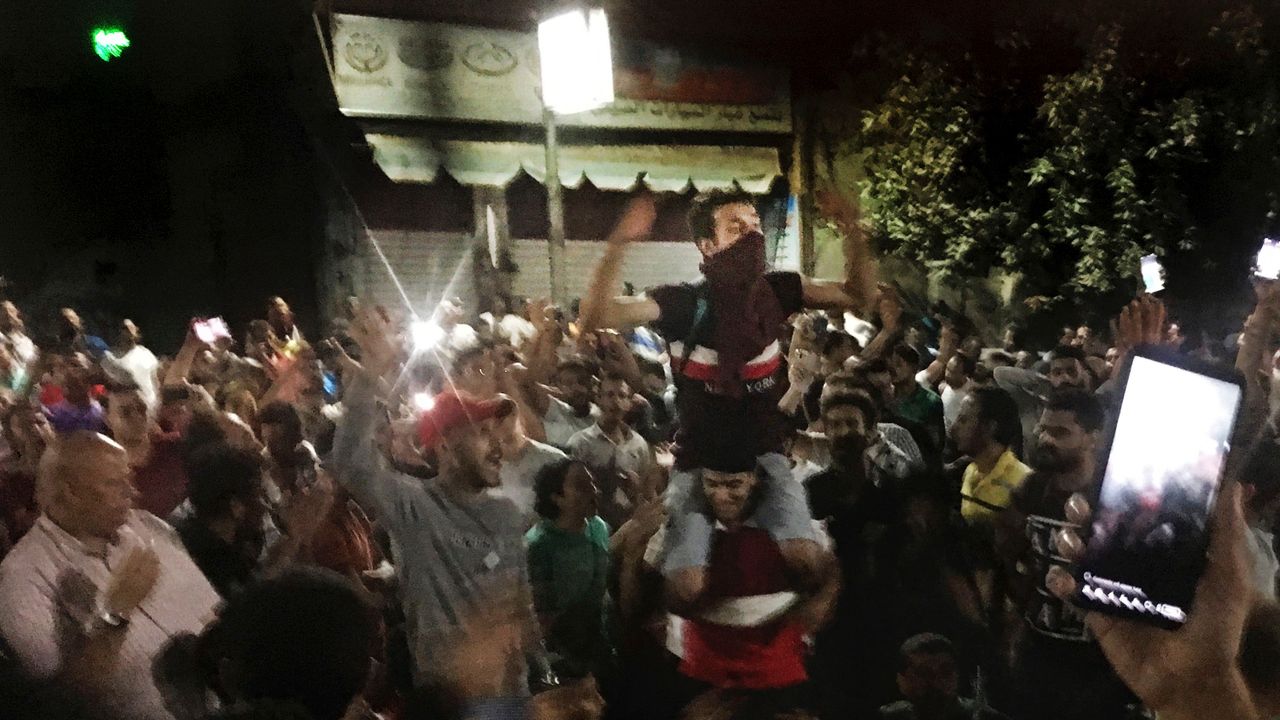 The regime reacted nervously and brutally. In Cairo, heavily armed security forces dispersed the demonstrators on Saturday morning, and armoured vehicles sealed off Tahrir Square. In other cities, too, protests were broken up by force. According to the limited reports that are available, there were over two hundred arrests. Videos on social media showed emergency forces hunting down peaceful demonstrators and attacking them with tear gas and rubber bullets.

In Suez, where demonstrators gathered again in the central Arbaeen Square during the night of Saturday to Sunday despite massive police violence, the security forces even used live ammunition. “They (security forces) fired tear gas, rubber and live bullets and there were injuries,” a man who took part in the demonstration and did not want to be identified told AFP.

Another resident reported that the tear gas was so thick that it had reached her apartment a few kilometres from the city centre: “My nose started burning up. The smell was seeping through the balcony. I also saw some youth run and hide in our street.”

The immediate trigger for the protests was a series of videos published by Egyptian actor and contractor Mohamed Ali, who lives in Spain, on his Facebook account. In them he accuses Sisi of embezzling public money for personal purposes and of building expensive palaces for his family, while the mass of the population lives in bitter poverty. It is time for the Egyptian population to rise up, he said, as it is “numerically stronger than the army and police.”

The Arab hash tag #Kifaya_baqi_yaSisi [“Sisi, it’s enough”] was shared more than 1.5 million times within hours of Ali, who as an entrepreneur himself worked with the Egyptian army for many years, posting the videos on Twitter. Many users also posted pictures and videos of the revolutionary protests in 2011 on the social networks and announced via Twitter: “We’ll be on the streets again tomorrow!” Ali himself calls for a “million-man march” against the regime next Friday.

Even though the protests at the weekend have not yet reached the extent of the mass protests of 2011, they triggered shock on the Egyptian stock exchange. Trading was suspended on Sunday, after the EGX 100 collapsed by 5 percent. This is “definitely” due to the “small escalation over the weekend, which is making investors cautious,” said Ashraf Akhnoukh, director of Arqaam Capital in Cairo.

In its first official statement on Sunday morning, the Egyptian regime tried to play down the significance of the protests. “In the context of Egypt’s size, as a country with more than 100 million people,” they were not significant. At the same time, the regime instructed journalists who had reported on the “events of the last 24 hours” not to use social media as an information source and to adhere to “professional rules.” That is, whoever does not reflect the propaganda of the government must fear persecution.

In fact, the protests are an expression of the enormous social and political opposition building up beneath the surface of Sisi’s bloody military dictatorship. Since the regime took out a new IMF loan in 2016 and sought to cut government spending and cut subsidies for gas, water and bread, already-rampant poverty has exploded. According to official statistics, one in three Egyptians lives in poverty, i.e., on less than US$1.40 a day. According to the World Bank, “some 60 percent of Egypt’s population is either poor or vulnerable.”

To maintain social inequality and suppress the revolutionary struggles of the Egyptian workers, Sisi installed one of the world’s most brutal dictatorships with the support of the imperialist powers. Immediately after the coup against Islamist President Mohamed Mursi, who died in prison in 2019, the Egyptian military stormed two protest camps and murdered thousands of opponents of the regime. Since then, more than 60,000 have been arrested, some 2,500 death sentences have been passed, and at least 144 people have been executed.

Now that the Egyptian masses are once again being thrown into battle, it is crucial to learn the lessons from the bitter experiences of recent years.

Through mass strikes and protests in 2011, the Egyptian and Tunisian working classes succeeded in overthrowing the dictators supported by the imperialist powers and destabilizing the ruling elites throughout the region and internationally. …

The only way forward is an international revolutionary struggle of the working class, which consciously aims to overthrow the capitalist state and imperialism, take power and reshape society on the basis of a socialist program. The objective conditions for this have matured in the Middle East and worldwide. This entire year has been marked by an upswing of the international class struggle. In recent months alone, mass protests have taken place in Sudan, Algeria, Puerto Rico and Hong Kong. And fighting is also developing in the imperialist centers in Europe and the United States, such as the current strike of almost 50,000 car workers at General Motors in the U.S.

U.S. REFUSED TO HELP REPORTER IN DANGER The publisher of The New York Times said the Trump administration would not help one of its reporters who was about to be arrested in Egypt two years ago, saying the episode was just one of many instances of the U.S. retreating from its “historical role as a defender of the free press.” [HuffPost]

In the teeth of a massive police-state crackdown, Egyptian workers and youth took to the streets again Friday to demand an end to the six-year-old dictatorship of General Abdel Fatah al-Sisi, who seized power in a bloody 2013 coup: here.