This 20 September 2019 video says about itself:

How the #ClimateStrike travelled around the world

From Sydney to New Delhi, Nairobi to New York, millions of people around the world walked out of school and work on Friday to join the latest protests against the climate crisis. The global day of action, calling for a reduction in emissions, was held in the run-up to a UN summit in New York.

By Bryan Dyne and Will Morrow in the USA:

Four million people participated in the global climate strike across every continent on Friday, many of them school students who skipped school on that day. Demonstrations in more than 5,800 locations in 161 countries began in Australia and the Pacific, and moved to Asia, Antarctica, Africa and Europe, and North and South America. This is the third such climate strike this year, following similar mass global demonstrations this past March and May, and the largest to date.

The protests were directed at the inaction and inability of world governments to take any significant measures to resolve the crisis, despite increasingly dire warnings from the United Nations and other agencies that if greenhouse gas emissions are not immediately halted, at least half the world’s population will face one or more climate-related catastrophes likely in the next decade. Similar outrage was directed against international climate summits such as the 2015 Paris Agreement, which have proven worthless in the face of the crisis. 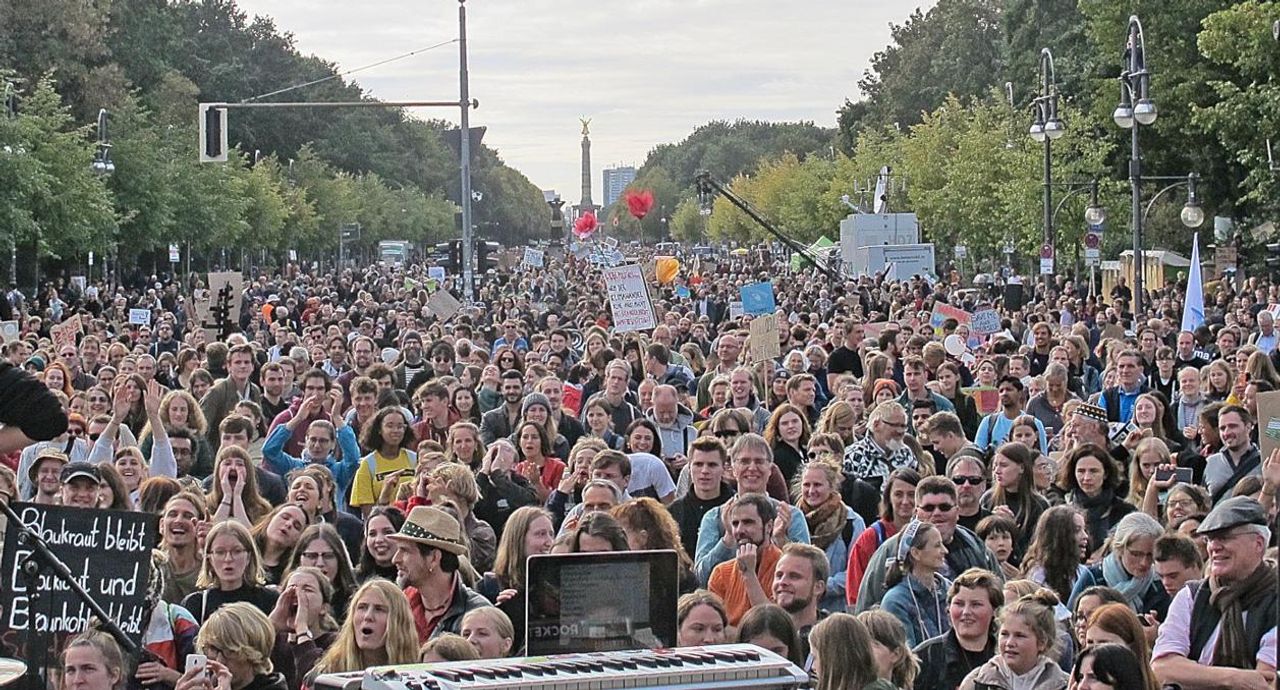 Some of the largest demonstrations occurred in Germany, where over 100,000 protested in front of Berlin’s Brandenburg Gate, according to news reports, and up to 270,000 according to the protest organizers, for a total of 1.4 million people across the country. More than 330,000 demonstrated across Australia, 100,000 in Britain and up to 300,000 in the United States. Thousands more took to the streets in Uganda, Nigeria, Ghana, across North Africa, Colombia, Bolivia, Brazil, India, Vietnam, Indonesia, the Philippines, Japan and New Zealand.

Significant protests were also held across the South Pacific, including in the Solomon Islands and Fiji. Countries in the region are among the hardest hit by the deepening climate crisis, as a result of rapidly rising sea levels.

The political views of those who attended were very varied. Capitalism, however, was a dirty word for the overwhelming majority of the protesters. Many expressed their outrage over the refusal of governments to take any action over years to address the issue, and spoke about the subordination of life to the interests of the rich under capitalism. “The problem is that the big companies aren’t being held accountable,” said Ondina, a Salvadorean worker IT worker living in Stuttgart, Germany. “They shouldn’t be allowed to be so powerful. They want to get the most out of everything—from the markets, from their workers, and from the environment. Everyone who is aware of this exploitation should begin to take action. Governments won’t change that—that’s why we have to do something.”

Many protesters, including many born after 2001 who have lived under perpetual US-led wars their entire lives, connected environmental to social inequality and the danger of war. Sarah, a Canadian student in Paris, noted that “there’s so many causes today, so much you can fight for… I’m also concerned about war. It’s because they spend so much money on the military and have these guns and tanks and they want an excuse to use them.”

Members of the Socialist Equality Party and the International Youth and Students for Social Equality (IYSSE) and other supporters of the World Socialist Web Site attended demonstrations in several countries, where they distributed copies of the WSWS statement “The only solution to climate change is world socialism”, explaining the SEP’s fight to mobilize the working class against capitalism.

Kourosh, a law student in San Diego, agreed that capitalism is the source of the climate crisis. “Any talk about climate change must include socialism and the economic system. Also the military is a huge polluter as well that doesn’t get talked about in liberal circles. I’m definitely for socialism.” Kourosh also mentioned that he is studying law to defend democratic rights, including the protection of whistleblowers like Julian Assange and Chelsea Manning.

In the working-class regional city of Newcastle, Australia, Daniel and Haily came out to lend support to the students. “The system is not designed for the human spirit,” said Daniel. “We need to understand we’re not in a system designed to move forwards. Currently what’s promoted is greed and gluttony. It’s not designed for ‘Joe Blo’ (like you and I) but for the one percent, the Johnson & Johnson owners and the like. It’s disgusting! We need a society which empowers people to pursue social goals. Once people are given the power, there is no shortage to what we can do!” …

Opposition to establishment politics was also graphically expressed in Manchester, where Andy Burnham, the right-wing Blairite Labour Party mayor, used the protest of 2,000 people as the occasion for a photo opportunity. This backfired as he was denounced by young people, including a 10-year-old speaker, not simply for his inaction on climate change, but also his record implementing right-wing policies as a mayor.

Ynez in Los Angeles spoke against those who push for global warming solutions through “diet” or “lifestyle” changes. “Some people will have you believe climate change is everyone’s individual responsibility, and will focus on something like only using reusable water bottles—but that’s only a tiny change. We need to make systemic changes to stop the horrible things being done to the Earth.”

Other political questions were raised, including widespread support for the ongoing national strike by US autoworkers against General Motors. There was also broad sentiment against the establishment media and the so-called “left” parties in each country, despite the veneer of support they gave.

The massive influx of resources needed to halt and reverse climate change requires the reorganization of economic, social and political life on an international scale. Energy production must be coordinated on a global scale in order to transition to renewable forms, which in turn requires the most serious scientific investigation into new techniques and ideas. Such a fundamental shift, however, comes into direct conflict with the nation-state system and the drive of corporations for private profit.

Some sections of big business, like the fossil fuel companies, are openly opposed to any concessions to the growing movement against climate change. But the capitalists in every country… are equally opposed to any serious action. They hope by slapping on a “green” label they can neutralize the protests and turn millions of working people and youth away from a struggle against the profit system.

It is not a question of appealing to the powers that be, but of directly opposing the domination of society by a handful of billionaires and the social system over which they preside. At the same time, as the global nature of the protests objectively demonstrates, students must turn to the decisive revolutionary and international social force, the working class.

A century of unplanned and increasingly irrational capitalist development has caused a worldwide ecological crisis. But the scientific and technological advances made in the course of the past century provide the ability to address this crisis in a rational and socially beneficial way. However, to free up the resources needed to tackle climate change—along with war, poverty and inequality—requires a complete socialist reorganization of economic life. The economy must be placed in the democratic control of the working class, the only social force capable of establishing a society based on human need, including a healthy global environment.

‘There is no planet B’: Millions take to the streets globally in what could be largest environmental protest in history. ‘Most of us want to fix the climate crisis. And it can be done. But we need our politicians to act’: here.

7 thoughts on “Millions on strike against global warming”