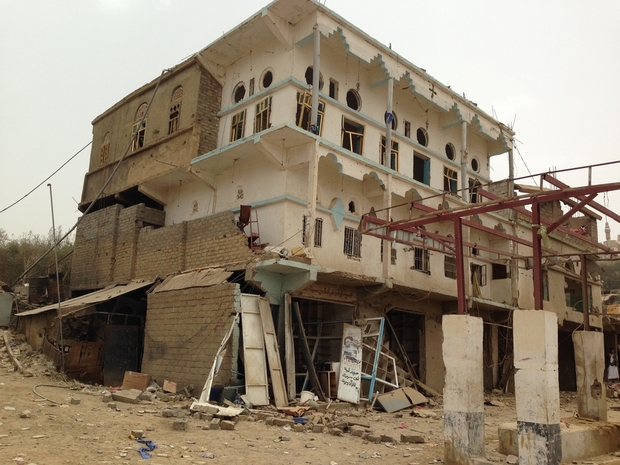 This photo shows a hospital bombed in Yemen by the Saudi-led coalition using British and French missiles.

US, UK AND FRANCE CHARGED WITH COMMITTING WAR CRIMES IN YEMEN – says the UN

THE UNITED States, Britain and France may be complicit in war crimes in Yemen by arming and providing intelligence and logistics support to the Saudi-led coalition which starves civilians as a war tactic, the United Nations said on Tuesday.

UN investigators have compiled a secret list of possible international war crimes suspects, drawn from their latest report into violations during the four-year conflict between a coalition of Arab states and the Houthi movement that controls Yemen’s capital.

The investigators, appointed by the UN Human Rights Council in 2017, said they had ‘identified, where possible, individuals who may be responsible for international crimes’, and had provided the confidential list to UN rights chief Michelle Bachelet.

If confirmed by an independent and competent court, many of the violations identified ‘may result in individuals being held responsible for war crimes,’ they said in a statement.

‘The international community must stop turning a blind eye to these violations and the intolerable humanitarian situation,’ said Kamel Jendoubi, who heads the ‘Group of Independent Eminent International and Regional Experts’.

The report accused the anti-Houthi coalition, led by Saudi Arabia and the United Arab Emirates, of killing civilians in air strikes and deliberately denying them food in a country facing famine. …

The Houthis drove Yemen’s pro-Saudi government out of the capital Sanaa in 2014. The Saudi-led coalition of Sunni Muslim states intervened the following year to restore the ousted government, a conflict that has since killed tens of thousands of people.

The prospect of famine has created what the United Nations describes as the world’s biggest humanitarian crisis.

The UN report’s appendix lists the names of more than 160 ‘main actors’ among Saudi, Emirati and West-recognised Yemeni top brass, although it did not specify whether any of these names also figured in its list of potential suspects.

‘Individuals in the Government of Yemen and the coalition, including Saudi Arabia and the United Arab Emirates, may have conducted airstrikes in violation of the principles of distinction, proportionality and precaution, and may have used starvation as a method of warfare, acts that may amount to war crimes,’ it said.

‘The legality of arms transfers by France, the United Kingdom, the United States and other States remains questionable, and is the subject of various domestic court proceedings.’

It found that a Joint Incidents Assessment Team, set up by Saudi Arabia to review alleged coalition violations, had failed to hold anyone accountable for any strike killing civilians, raising ‘concerns as to the impartiality of its investigations’.

The UN panel said it had received allegations that Emirati and affiliated forces have tortured, raped and killed suspected political opponents detained in secret facilities, while Houthi forces had planted land mines.

Since 2015, fighting in Yemen has claimed tens of thousands of lives and has sparked what the UN calls the world’s worst humanitarian crisis.

Both the [Saudi puppet] Yemen government and the Saudi-led coalition that intervened in the conflict in 2015 to support the West-recognised government against … Houthi rebels have refused to cooperate with the experts.

But the UN investigators said they had based their findings on more than 600 interviews with victims and witnesses, as well as documentary and open-source material.

In their second report, which they are due to present to the Human Rights Council later this month, they detailed how airstrikes, indiscriminate shelling, snipers, and landmines are terrorising civilians in many parts of the country. …

‘This endemic impunity – for violations and abuses by all parties to the conflict – cannot be tolerated anymore,’ Jendoubi said in the statement.

‘Impartial and independent inquiries must be empowered to hold accountable those who disrespect the rights of the Yemeni people,’ he said.

In their report, the experts ask the Human Rights Council to allow them to continue their work to ensure the rights situation in Yemen remains on the agenda, and also to strengthen their mandate by allowing them to collect and preserve evidence of alleged violations in a bid to combat impunity.

They also called on countries to refrain from providing weapons to the different sides in the conflict.

The experts warned the US, Britain, France, Iran and others that they ‘may be held responsible for providing aid or assistance for the commission of international law violations if the conditions for complicity are fulfilled.’

In its World Report 2019, Human Rights Watch noted: ‘The armed conflict in Yemen has killed and injured thousands of Yemeni civilians since it began.

‘As of November 2018, 6,872 civilians had been killed and 10,768 wounded, the majority by Saudi Arabia-led coalition airstrikes, according to the Office of the United Nations High Commissioner for Human Rights (OHCHR).

‘The actual civilian casualties are likely much higher. Thousands more have been displaced by the fighting and millions suffer from shortages of food and medical care.’

The rights group added: ‘Across the country, civilians suffer from a lack of basic services, a spiralling economic crisis, and broken governance, health, education, and judicial systems.

‘Parties to the conflict have exacerbated what the UN has called the world’s largest humanitarian catastrophe, including by unlawfully impeding delivery of desperately needed humanitarian aid.

‘The armed conflict has taken a terrible toll on the civilian population. The coalition has conducted scores of indiscriminate and disproportionate airstrikes killing thousands of civilians and hitting civilian objects in violation of the laws of war, using munitions sold by the United States, United Kingdom, and others, including widely banned cluster munitions. . . .

‘Since 2015, Human Rights Watch has documented about 90 apparently unlawful coalition airstrikes, which have hit homes, markets, hospitals, schools, and mosques. Some of these attacks may amount to war crimes. In 2018, the coalition bombed a wedding, killing 22 people, including eight children, and in another strike bombed a bus filled with children, killing at least 26 children.

Human Rights Watch has identified remnants of US-origin munitions at the site of more than two dozen attacks, including the 2018 attacks on the wedding and the bus.

‘By early 2018, meetings of the coalition included representatives from Saudi Arabia, the UAE, Jordan, Bahrain, Sudan, Egypt, Kuwait, and Morocco, as well as Pakistan, Djibouti, Senegal, Malaysia, and Yemen, according to the Saudi state news agency itself.

‘The United States has been a party to the conflict and may be complicit in unlawful coalition attacks in which it took part. The US has provided in-air refuelling and other tactical support to coalition forces, but has not provided detailed information on the extent and scope of its engagement. In November, the US said it was ending in-air refuelling to the coalition.

‘The UK has provided training and weaponry to members of the coalition.

‘The US, UK, France, and others have continued to sell munitions and other arms to Saudi Arabia and other coalition states, despite the coalition’s frequent unlawful attacks. A number of US and UK lawmakers have challenged their governments’ continuation of these sales. UK arms sales to Saudi Arabia face ongoing litigation.’