This August 2017 video says about itself:

A short story on the European Beewolf wasp (Philanthus triangulum) showing how it preys on others and what it does to improve the success of its offspring. Shot on heathland.

The beewolves on Texel are doing well

The tourists are not the only ones who enjoy the summer temperatures on Texel, also the solitary beewolves – a species of wasp that is not dangerous to humans – benefit from the heat. The bird watchers at De Slufter discovered more than a hundred nests at the end of last month alongside the bike path at the Zanddijk dunes. Last year the counter stopped at around thirty heaps of sand made by the beewolves. Beewolves catch honey bees as food for their young.

At De Slufter, the beewolves do not have to fly far, because every year a beekeeper puts his hives with tens of thousands of honey bees very close to the nest location of the beewolves. His honey bees get nectar from the flowering sea lavender in De Slufter, but several hundred honey bees end their lives in the wolves’ nest. …

This year the bird watchers discovered another insect that keeps a close eye on the activities of the bee wolves. An insect with fantastic green and red shiny, metallic colours. It is one of the most beautiful insects in the Netherlands: an emerald wasp with the scientific name Hedychrum rutilans of less than a centimeter in size. It is a rare wasp species, although it has been observed more frequently in recent years – just like the beewolves. It is the only emerald wasp that targets beewolves. Other jewel wasps have other victims. … She tries to deposit her egg in the beewolf’s nest. According to the EIS research agency of Naturalis, this is the seventh observation of this jewel wasp on Texel. 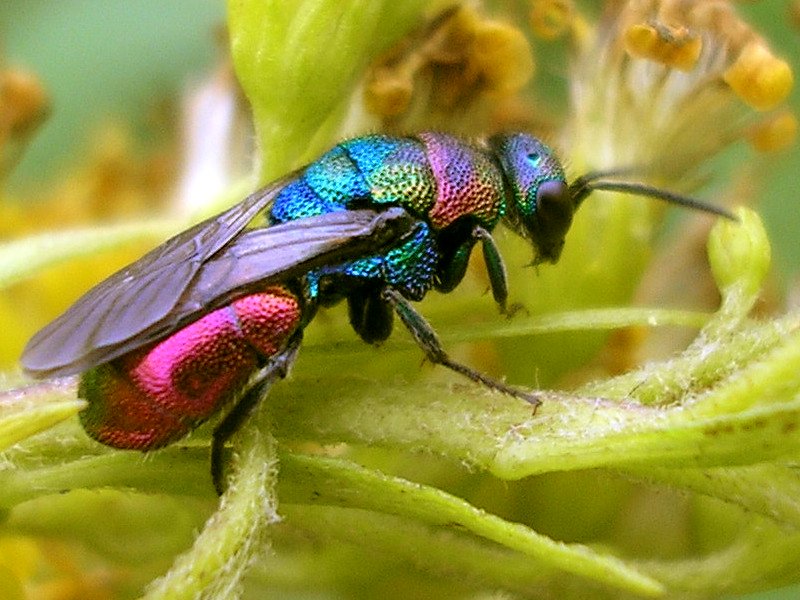