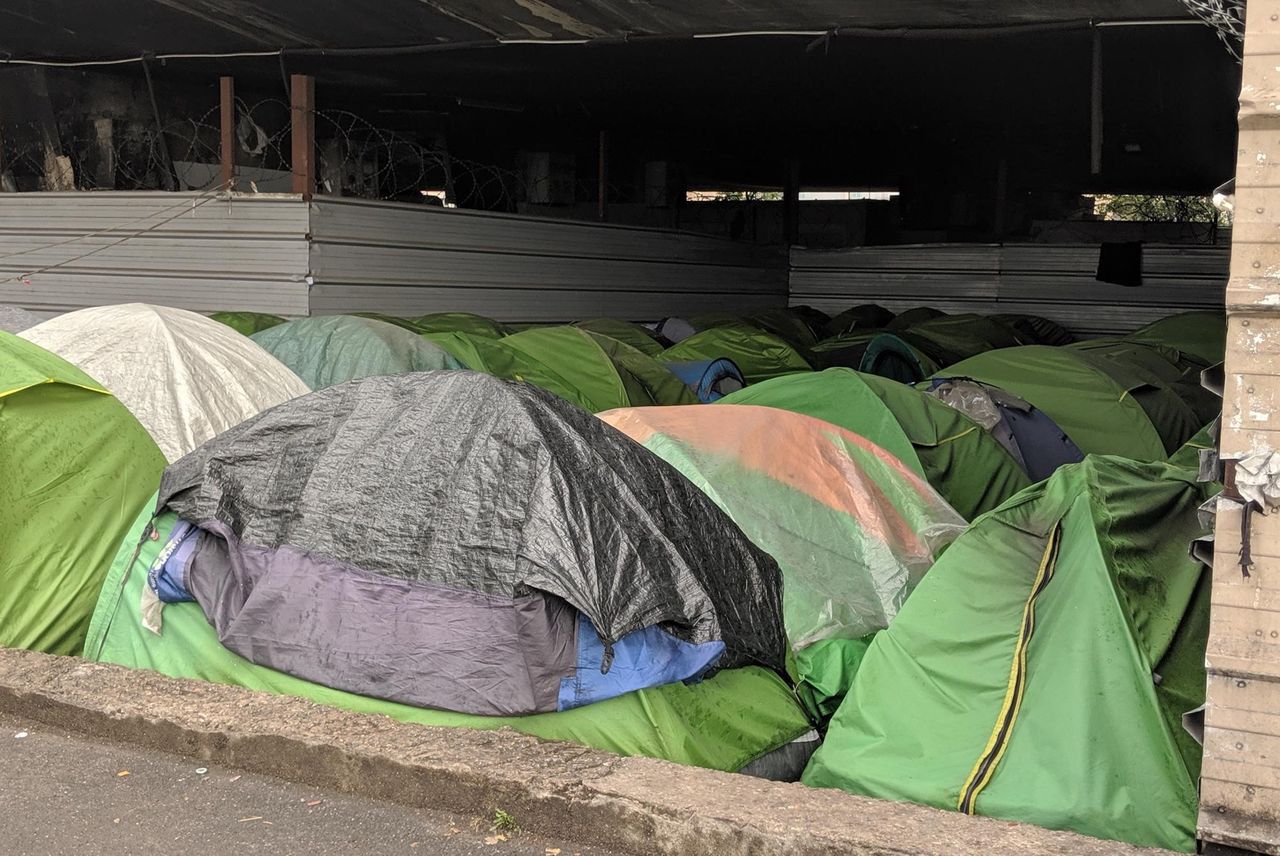 Every night in Paris, in sprawling tent encampments under highway overpasses, in local playgrounds and parks, thousands of refugees go to sleep on the street. They receive no government housing, no money, no food and have no legal right to work. They are the victims of a criminal anti-immigrant regime overseen by the French state and the European Union and supported by the entire French political establishment.

Last week, World Socialist Web Site reporters interviewed dozens of asylum seekers in tents between the La Chapelle neighborhood of the 19th arondissement of Paris and the suburb of Saint Denis. Among them, most are younger than 25—the youngest 15, the oldest 45—and have been homeless in Paris for more than two years, relying on charities and private citizens for food, selling tourist knick-knacks, alcohol and cigarettes on street corners for cash.

There are between 1,500 and 2,000 homeless refugees in La Chapelle and neighboring suburbs alone, according to the immigrant rights group France Terre d’Asile. Many thousands more live in similar conditions across the country, and tens of thousands are imprisoned every year in a network of detention centers where they await deportation. The majority have fled Africa and the Middle East, escaping neo-colonial wars and conditions of poverty and social breakdown produced by centuries of oppression at the hands of France and the other imperialist powers.

The entire political establishment is complicit in this vicious anti-immigrant program, which is aimed at preventing refugees from exercising their democratic and legal right to claim asylum in France. … 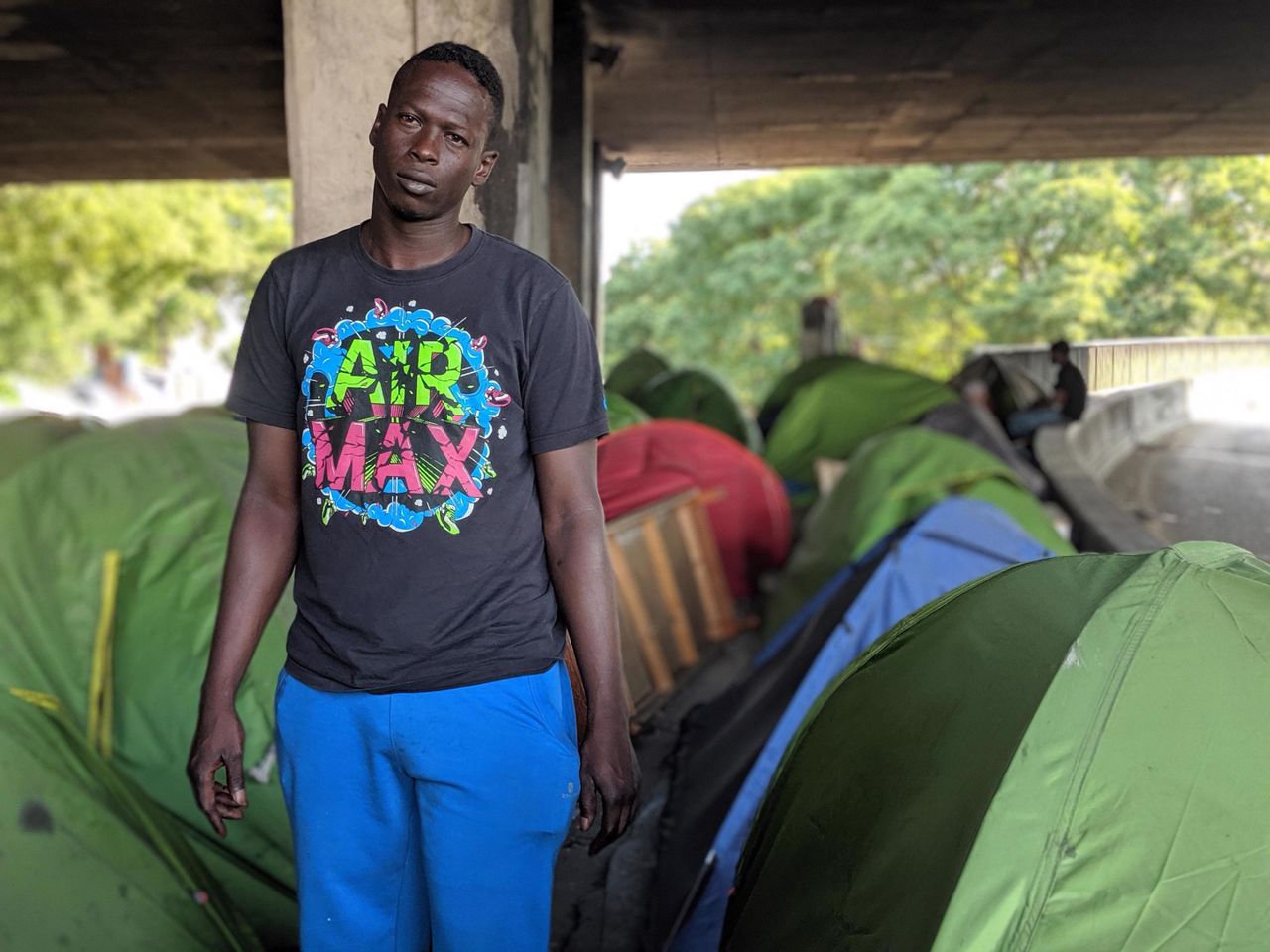 Abdullah, 26 years old, is one of those living under the périphérique ring road at La Chapelle. He has been there since the start of 2019. Today he lives selling cigarettes at pedestrian crossings in the city.

It took him just under three years to reach France after fleeing Sudan in 2016. He travelled north through Libya and sailed across the Mediterranean toward Italy. This is the cheapest, and also likely the most dangerous, route. In 2011, France, the UK and the US launched a neo-colonial war for regime change in the country under humanitarian pretenses, plunging Libya into an ongoing civil war and installing an unstable right-wing puppet regime based on rival militias.

Since 2015, the EU has provided the Libyan coastguard with arms, ships and money to intercept refugees attempting to flee and imprison them in EU-funded detention centers, where there is widespread torture, slavery, murder and rape by the prison authorities.

Abdullah made three attempts sail to Europe before finally succeeding. On his first attempt, at the end of 2017, the Libyan coastguard caught the small boat carrying 130 people. They “drove circles around us to make the boat capsize,” he said. “Everyone was in the water. When I came up, everyone was screaming. I looked around and saw the bodies of three people, two children and a woman, floating in front of me. They left them there in the water that day.”

All the passengers were imprisoned in a detention center in Misrata. Eventually, Abdullah escaped, travelling to Tripoli, and after three months attempted to cross to Europe again. The boat was caught again by the Libyan army, and this time he was imprisoned at the Triq al Sikka detention center for six months before he was able to escape again. “Everyone must work there for nothing”, he said of this second prison. “Those who work, eat. The others are beaten or killed. The prison is foul, there are no toilets, just buckets on the ground.”

Abdullah made his final attempt at crossing in June 2018. This time his boat was picked up by a commercial liner, and transferred to the Aquarius, a rescue ship operated by Doctors Without Borders, which took the passengers to Europe. The Aquarius has been unable to sail since last November—its sailing rights have been stripped, and France and the other EU powers have refused to provide it with a flag to sail under, as part of their strategy of preventing all rescue operations in the Mediterranean and ensuring that refugees either drown or are returned to Libyan prisons.

But in France, Abdullah’s application for an asylum visa was not approved. While permitted to live in France, he was told that because he had no official birth certificate or documentation about his hometown (which he first fled at the age of 12), he would not be provided with work rights.

“Now I sleep on the road here,” he said. His tent contains a mattress and some spare clothes. Rats can be seen 20 meters away, and cars and trucks pass by at 70 kilometers per hour less than two meters from where he sleeps. “I cannot work because they say I cannot have papers. So what can I do now? When you leave Africa and think about Europe, you think you will be able to work, have documents, have a life. But you don’t. You sleep on the streets. There are many people here under the bridge who go crazy because they see no way out. This is Europe.” 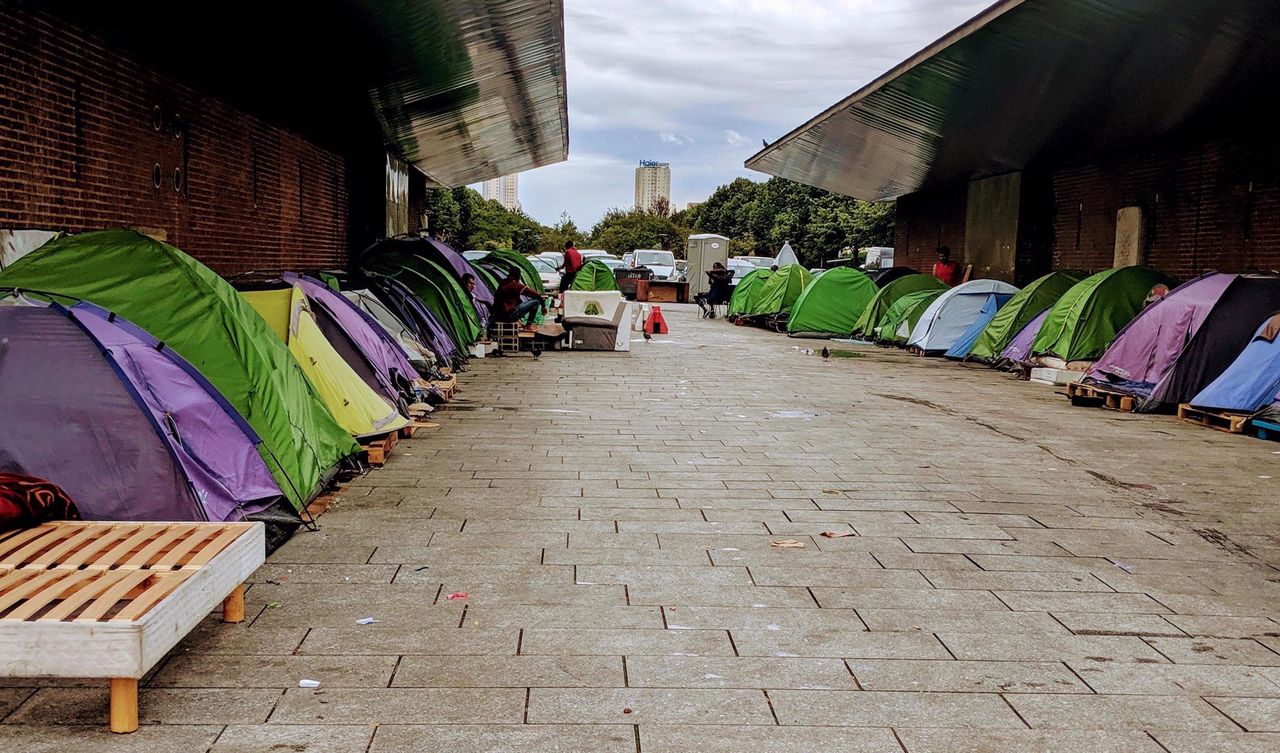 More groups of tents dot the roadway heading north out of Paris and into Saint-Denis. Less than a kilometer away, at a Saint-Denis park, lives Abdul, a 24-year-old former law student from Sudan. Under the EU’s punitive immigration system, he belongs to a category that Parisian asylum seekers refer to as “the Dublined”. It was created by the Dublin immigration agreement of 2013, which states that any refugee recorded arriving in one EU member state cannot reapply in another one, without waiting 18 months to submit their claim.

“When I arrived in Italy, they took my fingerprints,” Abdul said Friday, sitting in a Salvation Army center near La Chapelle where upwards of 200 refugees take showers and charge their cell phones every day. “So when I finally arrived here, they said I’d have to wait and gave me nothing. So I’ve been homeless here for the last two years. I just submitted my new application a month ago.”

As is the normal procedure for asylum applications in France, after submitting his application, Abdul was told to “wait” for an SMS about a follow-up meeting on his claim. They are given no information about when they will receive this text message, often waiting up to a year or more.

“I eat on the street. Sometimes I don’t eat. Sometimes individual people come and bring food they cooked at home. Most of the time I’m hungry,” he said.

Abdul took part in last month’s protest and occupation by more than 700 refugees at the historic Panthéon building, to demand the right to residency in France. “I received a photocopy of the leaflet on WhatsApp from my friend who was on the boat with me from Egypt to Italy,” he said. “I wanted to go just to show that we are here, that we exist. Right now, it is as if I didn’t exist. The government does nothing for us.”

He described the brutal police crackdown on the protest that ensued. Police entered the building, informing the protesters that “we could protest outside if we left. They told us, ‘In France, we have the freedom to protest.’” But as soon as the group left the building, the police attacked. “People were running everywhere to escape,” he said. “The police were just grabbing whoever they could get their hands on. I was arrested because I didn’t run. I said, I have the right to be here. Eventually three police came up to me, one hit me with a baton, and when I fell to the ground they kept hitting my legs.”

Police placed Abdul in detention for 24 hours before releasing him without charge. “I had all my identity documents and my application in my bag, which is why they let me out,” he said. “Many others had no papers—they were put in detention for deportation.”

“The French government makes criticisms of Salvini in Italy,” Abdul commented. “But it’s the same policy. At least in Lampedusa, I had a home to live in and food to eat. Here, nothing. It’s clear that this is intentional. What they are telling us is: Stay where you are, or if you want to come here, fine, but it will be la misère.” 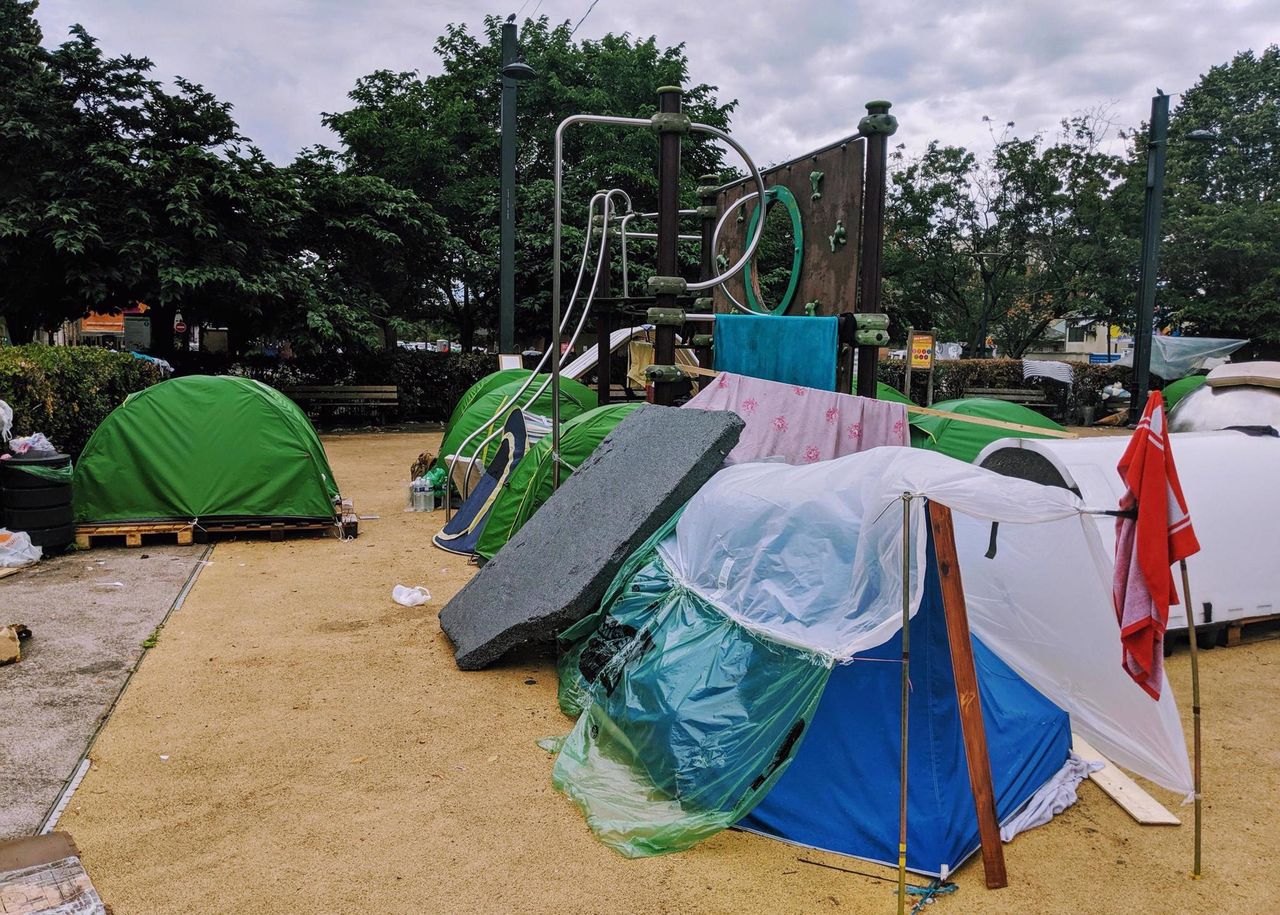 At a nearby Saint-Denis playground, dozens of refugees sleep on benches and tents, using the monkey bars as a clothesline and the other equipment as walls for their quarters. Mousa, a 44-year-old refugee from Somalia, has been in Europe for two years, and came to France after his application was rejected in Germany and he was threatened with deportation. He carried with him his papers, including medical prescriptions for Lyrica and Tilidin to treat his chronic back pain. He has no way of receiving these medications, and had eaten nothing for two days. “Most days someone comes at 9 p.m. and brings bread, tea and coffee,” he said.

David (29), Mohammedi (32) and Akbari (26) live in the same playground. All three are from Afghanistan, torn apart by a war led by the US and its NATO allies for the past 18 years, and all three came to France after their asylum applications were refused in Germany.

“Every day from 8:00 a.m. to 11:00 a.m. you try to call the number to submit your application,” David said. “You wait on the phone for 2 hours and no one answers.” It took one month for him to reach someone and book an initial appointment to lodge his claim at the police prefect. “He took my fingerprints, said I was ‘Dublin’, and that I’d have to wait or go back. I have nowhere to go. So we stay here.”

Under a highway at La Chapelle, we spoke to a group of eight teenagers, between 15 and 19, all homeless. They came via different routes to France from Guinea, a former French colonial possession with a 50 percent poverty rate, and have been in France for between two months and two years. One of them, Quatorze, who is 17, has been in Paris since February. His application was also rejected, because he could not provide authorities with a birth certificate.

“I want to continue my studies and go to university,” he said. “I wanted to study sociology. I have no documents, so I cannot work or study here. I cannot rent an apartment. We receive nothing from the government. We live because people come and give us food—not the government, normal people, who make sacrifices for us.”

“The European Union should stop hiding its face and saying that it comes to the aide of migrants,” he commented. “They leave us like this and leave the Mediterranean in silence.”

The brutal anti-refugee regime established by the French government and the European Union is a warning to the entire working class. The mass concentration camps across Africa, the enforced homelessness and destitution of those who reach France, the brutal police crackdowns on those who protest—all these are tools of repression being developed to be deployed against the entire working class, as opposition grows to unprecedented levels of social inequality.