This June 2019 Dutch video shows a preview of the Lakenhal museum in Leiden, the Netherlands, before it officially re-opened after years of reconstruction.

It shows especially exhibition hall #3, about the 16th century. We went there on 30 July 2019, after we had seen halls one and two. At the end of hall #2 was a big window with a fine view of the city, especially eighteenth-century windmill De Valk.

This video is about returning the most famous painting in hall #3, the Last Judgment by Lucas van Leyden, from its temporary stay in the Amsterdam Rijksmuseum during the Lakenhal reconstruction, to Leiden.

This 2011 video is about a Lucas van Leyden exhibition in the Lakenhal before the reconstruction.

The hall includes an anonymous 1530-1535 painting about the life of Saint Anthony. Some interesting details: an owl near the underside. And one of the devils tormenting the saint has a nun’s headgear on; which may be hinting at criticism of the Roman Catholic hierarchy.

These two videos are about the restoration of the 1515-1517 The Crucifixion of Christ, by Cornelis Engebrechtsz. Engebrechtsz is the most represented sixteenth-century Leiden painter in the third hall.

There is also work by one of Engebrechtsz pupils, Aertgen van Leyden. Rembrandt owned several of his paintings.

There were also sixteenth-century drinking vessels in this hall.

This June 2019 Dutch video shows a visit by a distant relative of Rembrandt to the reconstructed Lakenhal, to see the Rembrandt paintings there.

This June 2019 Dutch video shows a visit to a glasses shop, to talk about Rembrandt’s painting, present in the Lakenhal, The salesman of spectacles. 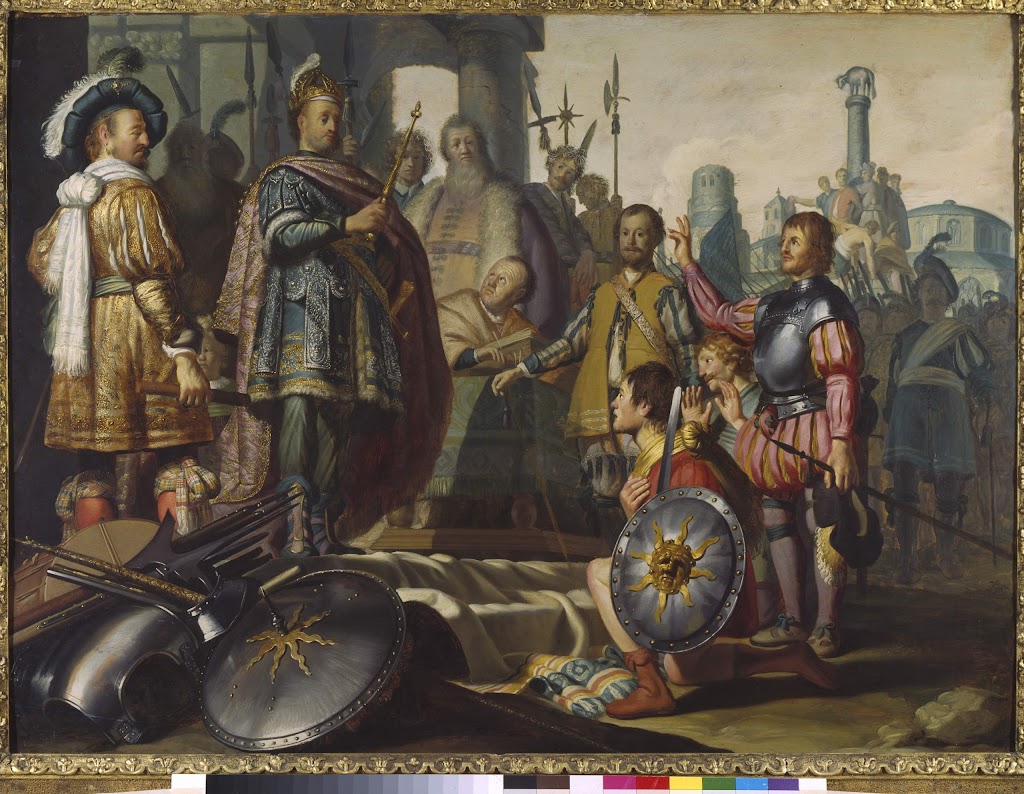 This is the other Rembrandt now present in the Lakenhal: a painting about history; we don’t know exactly what history. Behind the sceptre of the depicted king, Rembrandt, then twenty years old, made an inconspicuous self-portrait.

After the exhibition halls about the seventeenth century, there was a corridor with art by Jan Wolkers. Wolkers (1925-2007) is famous as an author, sculptor and painter. In this corridor, there was one small figurative sculpure, depicting Leda and the swan; and abstract reliefs and paintings.

This October 2017 video is about the Lakenhal acquiring artworks by Jan Wolkers.