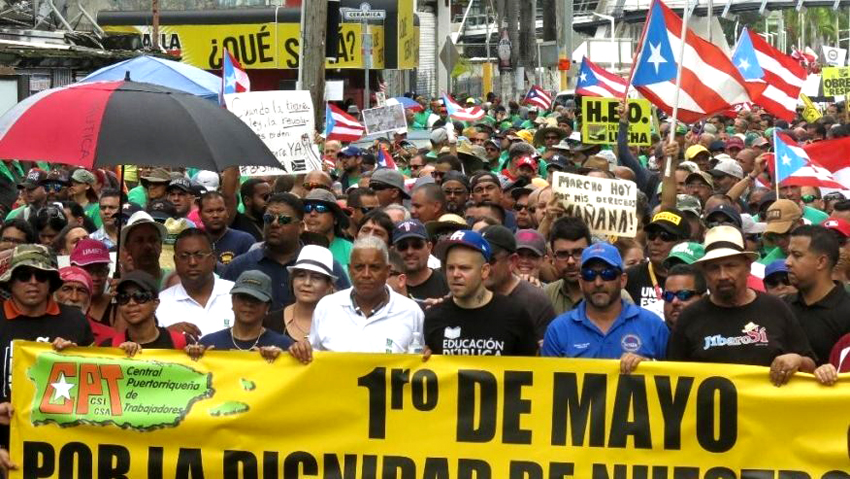 Fuelled by a general strike called by the island’s unions, around one in every three islanders converged on the capital San Juan on July 22 demanding the resignation.

The mass movement brought Puerto Rico to a virtual halt. ‘Ricky resign!’ was their persistent chant.

Rosselló and 11 members of his ruling clique were under fire for rampant corruption in his administration – two former Cabinet ministers have been indicted – and deep mismanagement of the slow recovery from 2017 Hurricanes Maria and Irma, and for leaked conversations that show the New Progressive Party governor and his advisers mocking and disparaging the thousands of people the storms killed.

The leaked materials are also rife with sexism, homophobia, and hatred of unions – especially a top teachers’ union and its president. All that has sent Puerto Ricans into the streets for 11 days and counting.

The unions are outspoken enemies of his right-wing scheme to close hundreds of the commonwealth’s public schools and privatise the rest, so throwing thousands of teachers, the backbone of Puerto Rico’s working class, out of jobs. Rosselló’s top financial advisor even called the teachers ‘terrorists’.

One of the two indicted Rosselló cabinet ministers was right-wing Education Minister Julia Keleher, who is not a Puerto Rican native. She not only carried out the pro-privatisation drive, but she closed hundreds of schools while rigging millions of dollars’ worth of no-bid contracts for her cronies.

The Communist Party of Puerto Rico said the sexism, homophobia, and threats against unions are actually symptoms of a much larger problem on the island – massive capitalist exploitation combined with rampant fraud. Rosselló’s scandals, it said, are ‘the straw that broke the camel’s back’.

In San Juan, crowds of people, dressed in black and waving the commonwealth’s flag, jammed downtown and shut down Las Americas Highway.

After unions called the general strike, shops joined in. Puerto Rico’s largest mall, the Plaza de las Americas, shut down, both in solidarity and to prevent a repetition of the prior week’s police tear-gassing of protesters.

‘The masses have taken to the streets because they are fed up with unemployment and ‘‘underemployment’’, hunger wages, and the lack of opportunities that in turn provoke a ‘‘mass exodus” to the US mainland’, the Communist Party’s statement said.

Puerto Ricans also hate Wall Street-ordered ‘pillaging (of) retirement funds, the dismantling of all social services from the public school system to medical centres, the increase of all types of charges and regressive taxes such as the sales and use tax (IVU), as well as everything else,’ it said.

‘There is a general feeling that there is something fundamentally wrong with the capitalist system itself when so many people get up each day to work and cannot live a fulfilled life. No one believes anymore the lie that those who don’t find work, especially dignified employment, are simply lazy.

‘On top of an increasingly unsupportable situation, the country is governed by a clique of thieves dressed in suits and ties that continually lie and deceive. Their arrogance gushes from their pores as well as the disdain they have for the common people.

‘And while the executive branch supervises the massive looting operation, the legislature creates the legal basis for it with laws approved often behind the backs of the people . . . All this for self-enrichment on the backs of the poor.’

To solve the problem, the party demands not just that Rosselló resign and the ruling circle be removed, but that Puerto Rico’s political system be replaced by popular-oriented democracy featuring mass referendums and an end to capitalist and financial domination of the island. It said both big Puerto Rican political parties are corrupt and graft-riddled.

The island’s largest newspaper, Nuevo Dia, demanded Rosselló resign. So did Carmen Yulín Cruz, the outspoken mayor of San Juan, who has been highly critical of the mainland GOP Trump administration’s slow and inept response to the hurricanes’ devastation, and of Trump’s anti-Puerto Rican slurs. Rosselló has not.

‘They can’t deny it. The power is in the street,’ the mayor said.

‘Puerto Rico has spoken up, not only as a strong, broad, and united voice but as the right voice’, Nuevo Dia’s editorial said. ‘With a gesture of nobility and humility, governor, it is time to listen to the people. You have to resign.’

Crowds supporting Puerto Rico gathered in several US mainland cities with large Puerto Rican populations, including a demonstration in front of the White House in D.C.

Prominent entertainers who are Puerto Rican natives joined in. So did Lin-Manuel Miranda, composer of the score of the hit musical Hamilton – just after Miranda picked up the MVP award at San Diego ComicCon earlier on July 22.

The American Federation of Teachers (AFT), whose commonwealth-wide affiliate is the among the largest of several Puerto Rican teachers’ unions, also demanded the governor’s resignation. Rosselló’s privatisation of the commonwealth’s schools after the hurricanes smashed many to smithereens, and his closure of hundreds more, left the teachers without jobs.

The leaked e-mails and other communications showed Rosselló and his allies targeted the Asociación de Maestros de Puerto Rico (AMPR), the AFT affiliate, and union President Aida Díaz Rivera. A top Rosselló financial aide, Christian Sobrino, in a December 2018 e-mail, replied in English and in capital letters to a statement from the union about negotiations over school financing: ‘I DONT [sic] NEGOTIATE WITH TERRORISTS!’

‘His criminal regime driven by hate and corruption broke promises to the island’s people’ – for a clean government, to undertake successful reconstruction after the hurricanes, and to solve the commonwealth’s financial crisis – forced on it by Wall Street financiers manipulating congressional Republicans.

The GOP set up a financial control board, which has been diverting aid away from reconstruction towards repaying Wall Streeters’ bond interest.

‘The example he (Rosselló) has set is one of corruption, cronyism, and contempt for the people of Puerto Rico,’ said Weingarten, whose union rushed aid to the island in the hurricanes’ aftermath and which has kept Puerto Ricans supplied with millions of gallons of fresh water to replace water supplies smashed and contaminated by Maria and Irma.

‘In the last few days, evidence has surfaced showing the governor, his top aides, consultants, and cabinet members engaging in online conversations over many months that are full of vile, hateful, and criminal statements,’ explained Weingarten. ‘What the governor and his administration have said and done to the workers, the teachers of Puerto Rico, rises to a different level of outrage.’