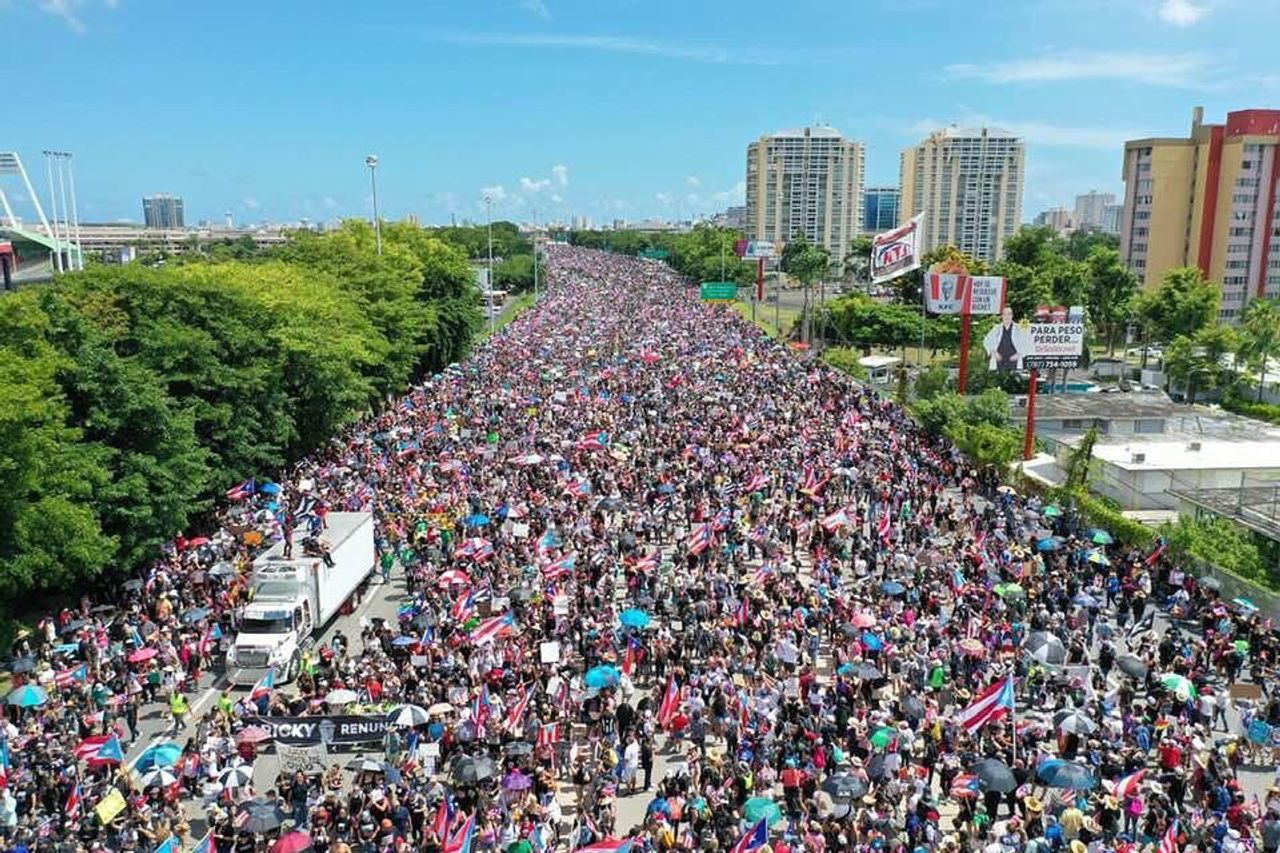 By Jerry White in Puerto Rico:

In what has been described as the largest demonstration in the history of Puerto Rico, hundreds of thousands of people in the US island territory marched Monday to demand the resignation of Governor Ricardo Rosselló.

The daily newspaper El Nuevo Día estimated that a half-million demonstrators participated in the “March of the People”, which paralyzed the capital of San Juan, shutting businesses and halting traffic. The demonstration included a huge procession down the island’s busiest highway, the Expreso Las Américas.

The mass mobilization marked the twelfth consecutive day of demonstrations, which have included clashes with riot police dispatched by Rosselló. Calls are mounting for an island-wide general strike amid solidarity protests in several cities on the US mainland with large Puerto Rican populations. Marchers in San Juan and at mainland protests chanted, “Ricky, ¡renuncia, el pueblo te repudia!” (“Ricky, resign, the people reject you.”)

Truck drivers parked their vehicles to help protesters occupy the main highway. A group of medical students told local media they were protesting because people are unable to get basic medical services at hospitals because the “government is so corrupt” and the funds needed to meet the needs of the people “go straight into politicians’ pockets.”

The governor’s effort to diffuse opposition by announcing he would not seek reelection next year and was handing over leadership of his New Progressive Party (PNP) only fueled popular anger. In a Facebook live broadcast Sunday, Rosselló reiterated that he would not resign and was “looking forward to turning over power to the person elected democratically.”

Rosselló, however, is politically isolated. Major news outlets including El Nuevo Día, the youth movement of his own party and other political officials are calling for his resignation. 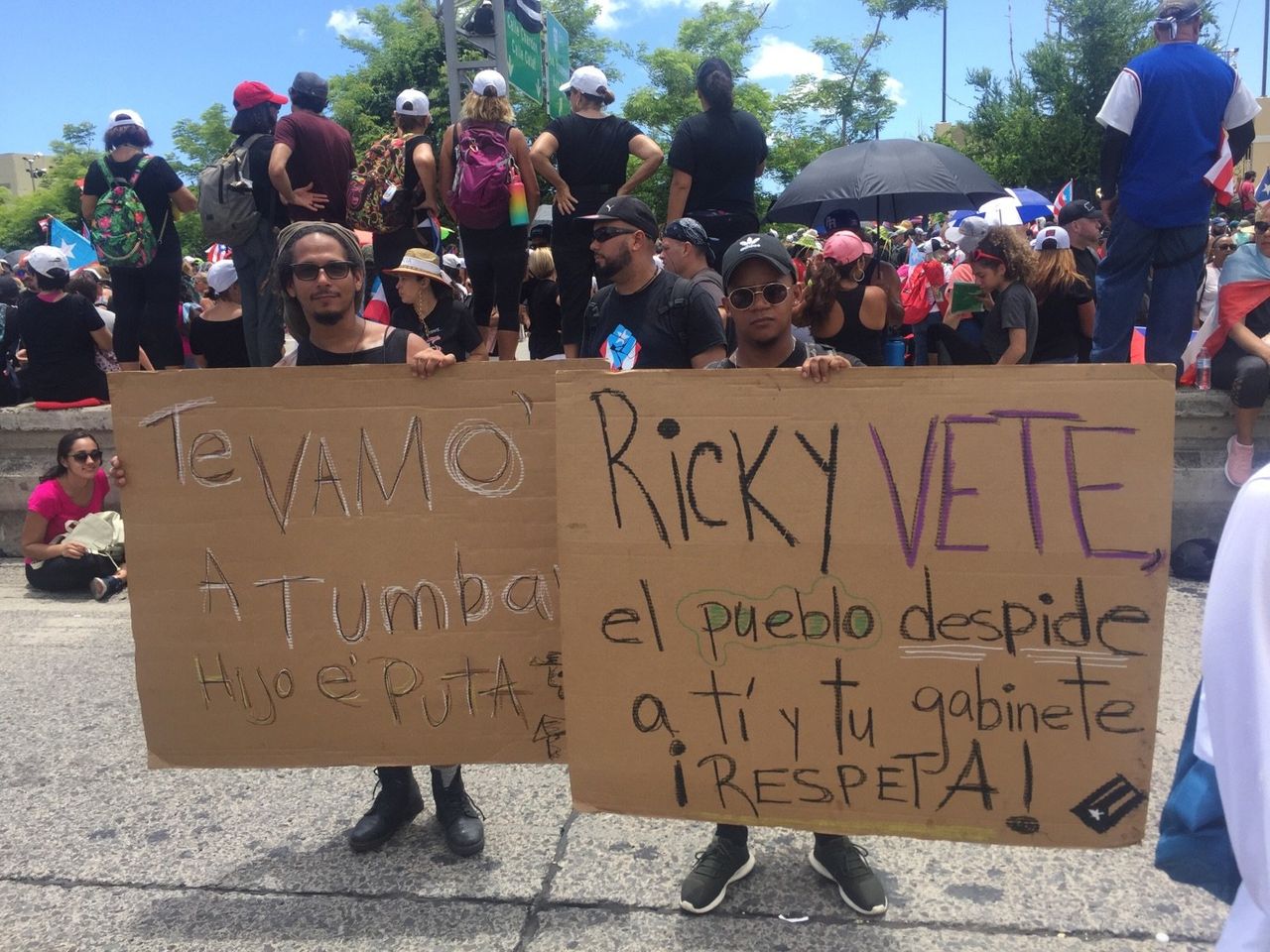 Pressed by a Fox News reporter Monday to point to one political figure who supported him, Rosselló cited Javier Jiménez, the mayor of San Sebastian. A few hours later, Jiménez said, “It’s not true that I support the governor.”

The protests have escalated since Puerto Rico’s Center for Investigation released nearly 900 pages of private chat messages between the governor and top officials in his administration. The chats exposed the political establishment’s contempt towards the island’s 3.2 million inhabitants.

In one exchange, the governor’s chief financial executive, Sobrino Vega, joked with Rosselló about the growing number of dead bodies piling up in the morgue after Hurricane Maria in 2017, with Vega quipping, “Don’t we have some cadavers to feed our crows?”

The release of the messages was only the catalyst for the social explosion, which was fueled by decades of factory closures and layoffs, compounded by austerity measures imposed by the Financial Oversight Board set up by President Obama and the devastation wrought by Hurricane Maria. An estimated 5,000 people perished in the hurricane and flooding that followed, largely as a result of the criminally negligent response by the Trump administration and local officials.

The messages were leaked the same week that the FBI arrested two former officials in the Rosselló administration—Education Secretary Julia Keleher and Angela Avila Marrero, the executive director of the health insurance administration. The two were indicted on federal corruption charges.

Keleher, a close political ally of Trump’s education secretary Betsy DeVos, sparked teacher strikes and mass protests after she seized on the hurricane to shut 283 public schools and lay off 5,000 educators.

Juan, a 58-year-old informal sector worker, told the WSWS: “This is a historic moment in Puerto Rican history that we have dreamed of for many years. This protest is not just about the chats in which the governor insulted the people of this country. These protests have been building up for the past 15 years.

“They are driven by the economic problems, job insecurity, attacks on labor rights, the high cost of living, and
the imposition of Wall Street and the economic junta. This reminds me of the US invasion of Puerto Rico in 1898. All of these protests are due to the emotional exhaustion of the country.”

Juan continued, “It is significant that there are young people as well as elderly people in these protests to defend their pensions. The youth are fighting for public education, which is being dismantled for private companies. I do not want this to end just with the resignation of the governor, but with a whole restructuring of political life in this country.

“I think the same process is taking place throughout Latin America and in Europe. It is a struggle on the one hand of the international interests of workers, to protect public education and pensions, and on the other of private capital. This is not a national problem—it has international consequences.”

“The content of the governor’s chats was obviously horrible,” Mario, a student at the University of Puerto Rico in Piedras Negras, told the WSWS. “But the PNP has moved further to the right, not only in economic terms but also social. Social security, teachers’ pensions and the services that the government should provide have all been cut.

“These austerity measures have created a divided society, where the poor and the workers on one side and the most fortunate on the other live in two different worlds but coexist in the same geographic areas.

“The education system is segregated by class. Public schools are badly run with a tiny budget and people cannot pay for private schools. Keleher justified her cuts by saying there was no money, and now she’s been arrested for stealing $15 million. The ruling class and the fiscal junta are punishing the working class unjustly, and this act of terrorism is driving people into the streets.” 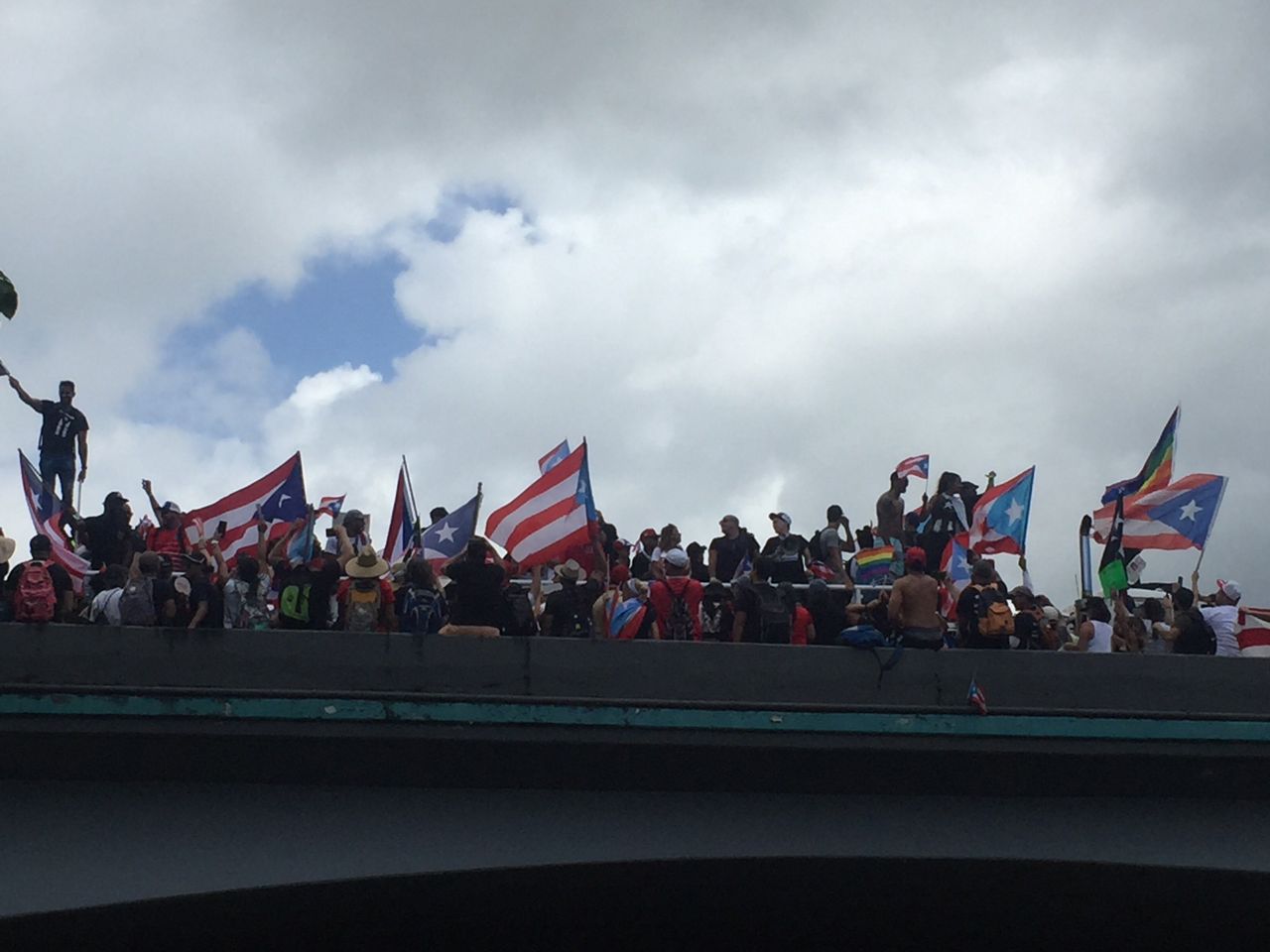 The WSWS also spoke to Anthony, a student whose grandfather needlessly died after the hurricane because he could not get his regular dialysis treatment due to lack of electricity.

“This is yet another chapter in the story of the government looting public funds, but this time the people are not willing to take any more of this nonsense. Everybody is clear that the group chat is not the problem but was only the mechanism by which the problem got exposed.

“The protests are about corruption, the dismantling of public education, the millions of dollars in donations that were never provided for the victims of the hurricane. No one is satisfied by the governor’s decision not to run nor be the president of the party. Each and every person involved in the scheme must be brought to justice.” … 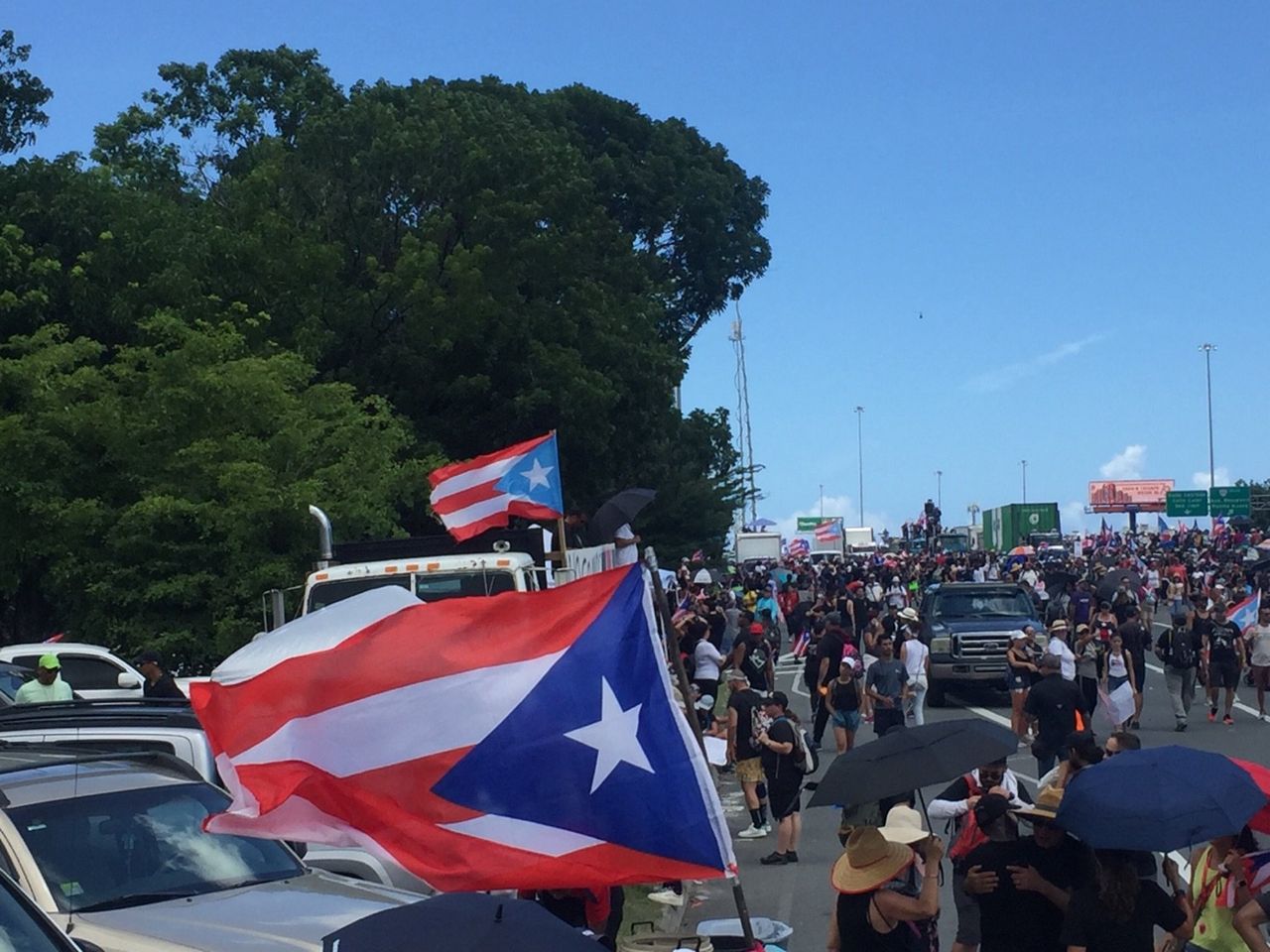 The outpouring of hundreds of thousands of people demanding the resignation of Rosselló is sending paroxysms of fear through the entire US political establishment. The Trump administration is also isolated. It is seeking to use fascistic attacks on socialism, along with xenophobia and racism, to counter the growing radicalization of workers and young people on the US.

On the Twitter account of Congresswoman Alexandra Ocasio-Cortez, several people tweeted that the American people should launch similar mass struggles to demand the resignation of Trump.

“If Puerto Ricans can do this, why can’t we? When is enough, enough?” one post said.

“Why can’t we do this here. Demand for removal of the current crap ass President. It clearly works. Majority wins. We need to walk the street demanding justice. This should be happening in every American city,” another said.

The protests in Puerto Rico are the latest example of the mounting worldwide movement against austerity and social inequality produced by the capitalist system. After more than a decade of government policies that have funneled unlimited cash to the financial elites who crashed the economy in 2008, strikes and protests have spread across the Americas, Europe, Africa and Asia.

The struggle to end the bankers’ dictatorship in Puerto Rico and secure the social rights of workers on the island can be taken forward only by appealing to workers and youth on the mainland to join the fight as part of an internationally coordinated struggle by the working class against capitalism and for socialism.