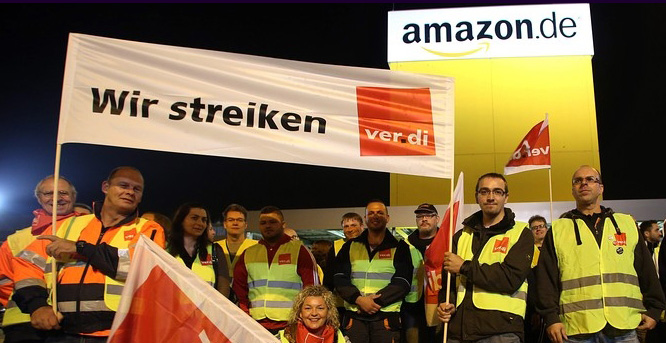 2,000 strike in Germany on Amazon’s Prime Day – Amazon workers erupt all over the world

MORE than 2,000 workers at seven Amazon sites across Germany have gone on strike over pay for at least two days, trade union Ver.di said on Monday, as part of a global movement of Amazon workers fighting atrocious working conditions worldwide.

The walkouts, under the motto ‘No more discount on our incomes’, started last Sunday night to coincide with Amazon’s Prime Day when the US online retail giant offers its ‘Prime’ customers discount deals.

Germany is its second-biggest market after the United States.

Amazon has faced a long-running battle with unions in Germany over better pay and conditions for logistics workers, who have staged frequent strikes since 2013.

Ver.di retail specialist Orhan Akman said in a statement: ‘While Amazon fuels bargain hunting on Prime Day with hefty discounts, employees are being deprived of a living wage.’

Akman said: ‘The company must finally recognise the collective wage agreements for the retail and mail order sectors.

‘Wages and salaries at Amazon must no longer be determined in the style of a lord of the manor.’

‘A universally binding collective agreement would then apply for Amazon too’, said Akman.

Amazon runs 12 warehouses – which it calls fulfillment centres – in Germany.

A Ver.di press statement said: ‘For the traditional bargain day at the mail-order company Amazon, the so-called Prime-Day, employees at seven locations in Germany will go on strike for at least two days this week.

‘Strikes are at the Amazon sites in Werne, Rheinberg, Leipzig, Graben, Koblenz and at the two locations in Bad Hersfeld.’

‘While Amazon blows with hefty discounts on Prime Day for bargain hunters, employees are deprived of a life-saving tariff payment,’ said Akman.

‘The discounts to the customers Amazon can pay by tariff flight and low wages of their own employees – that must be over.

‘The company must finally recognise collective agreements for retail and mail order. The wages and salaries on Amazon should no longer be determined by Gutsherrenart [feudal landlord’s way].

‘The money is available, in the first quarter of this year alone, Amazon has reportedly achieved a record worldwide profit of about 3.2 billion euros.

‘A universally binding collective agreement would apply then also for Amazon. The politics and the retail trade association HDE are obliged to open the way for this.’

The strikes in Germany were part of actions in 15 countries.

This 15 July 2019 video is called Amazon workers strike in Germany over pay.

Global union federation UNI had announced: ‘This Prime Day, scores of Amazon workers across Europe will be protesting and striking to win safer working conditions, living wages, and collective agreements with their unions at the e-giant’s warehouses.

‘Amazon employees and supporters will be taking action in Germany, the UK, Spain, and Poland.

‘Warehouse workers in the United States will be walking off the job as well.’

‘Amazon is going to be telling one story about itself, which is they can ship a Kindle to your house in one day, isn’t that wonderful,’ said William Stolz, one of the Shakopee employees organising the strike.

‘We want to take the opportunity to talk about what it takes to make that work happen and put pressure on Amazon to protect us and provide safe, reliable jobs.’

Until now, Amazon’s US workers haven’t walked off the job during key sales days.

About 250 union pilots who haul packages for Amazon and DHL Worldwide Express staged a brief strike in the lead-up to Thanksgiving in 2016 before a federal judge ordered them back to work, eliminating any disruptions during the peak holiday shopping season.

In the afternoon, workers also rallied outside the facility, located about 25 miles from Minneapolis.

‘In recent weeks, we’ve seen employees challenge Amazon’s response to our climate crisis and condemn its unethical use of facial recognition technologies.

‘Today, workers are demanding an end to Amazon’s brutal conditions and to its ongoing attack on their rights.

‘Amazon’s incredible wealth and enormous global footprint has been built on the backs of its workers, and this employee uprising is calling for greater accountability and responsibility.’

Stuart Appelbaum, President of UNI Global Commerce and President of the Retail, Wholesale and Department Store Union (RWDSU) in the United States, commented: ‘Amazon needs to understand that human beings are not robots.

‘By doubling Prime Day’s duration and halving the delivery time, the company is testing hundreds of thousands of workers’ physical limits as though they were trained triathletes.

‘This is plain wrong.

‘Operating at these speeds for this duration means Amazon needs to hire more workers, under more sustainable speeds that don’t put workers’ lives in jeopardy. Instead, we are seeing a callous indifference to worker safety.’

The UK’s GMB union also staged protests ‘up and down the country’ starting last Monday, July 15.

The union has documented deplorable conditions in Amazon warehouses, particularly in its Rugeley facility, where the union will hold a massive demonstration on July 19.

National Officer with the GMB, Mick Rix, said: ‘Amazon workers want Jeff Bezos to know they are people – not robots. It is time that Jeff showed empathy with the very people that have helped to contribute to his vast and increasing personal fortune.’

Workers from Spain’s Comisiones Obreras (CC.OO) will be joining the Rugeley action.

Workers in Spain are also planning a two-day demonstration outside of Amazon’s San Fernando de Henares warehouse, near Madrid.

They are demanding better pay and safer conditions inside their facility and nationwide.

Members of the CC.OO will then be joining the GMB in the UK on July 19 for the massive rally at the Rugeley facility.

And Polish unions NSZZ Solidarity Union (SolidarnoÊç) and Workers’ Initiative (Inicjatywa Pracownicza) launched an ongoing protest, which started on July 15, and will continue until they have reached a collective agreement with the company.

They have tried on multiple occasions to negotiate a collective agreement with the company, but Amazon shut down attempts at negotiations earlier this month.

The International Transport Workers’ Federation (ITF) said last Saturday: ‘Through a series of planned actions next week, Amazon will be challenged to do the right thing and recognise workers and their importance to the success of the company.

‘Increasingly, Amazon is being challenged to recognise unions, as workers seek to improve their rights and conditions through coordinated action at a global level.’

Steve Cotton, general secretary of the ITF, asserted: ‘My advice to the CEO of Amazon is – rather than put off the inevitable and risk business disruption – I would seek to negotiate a solution that is good for shareholders, management and most importantly the workers that have made Amazon so successful.

‘The starting point for that solution must be the right to organise, this is clearly a growing movement.

‘The ITF is committed to support Amazon workers in their pursuit for fundamental rights including the right to organise.’