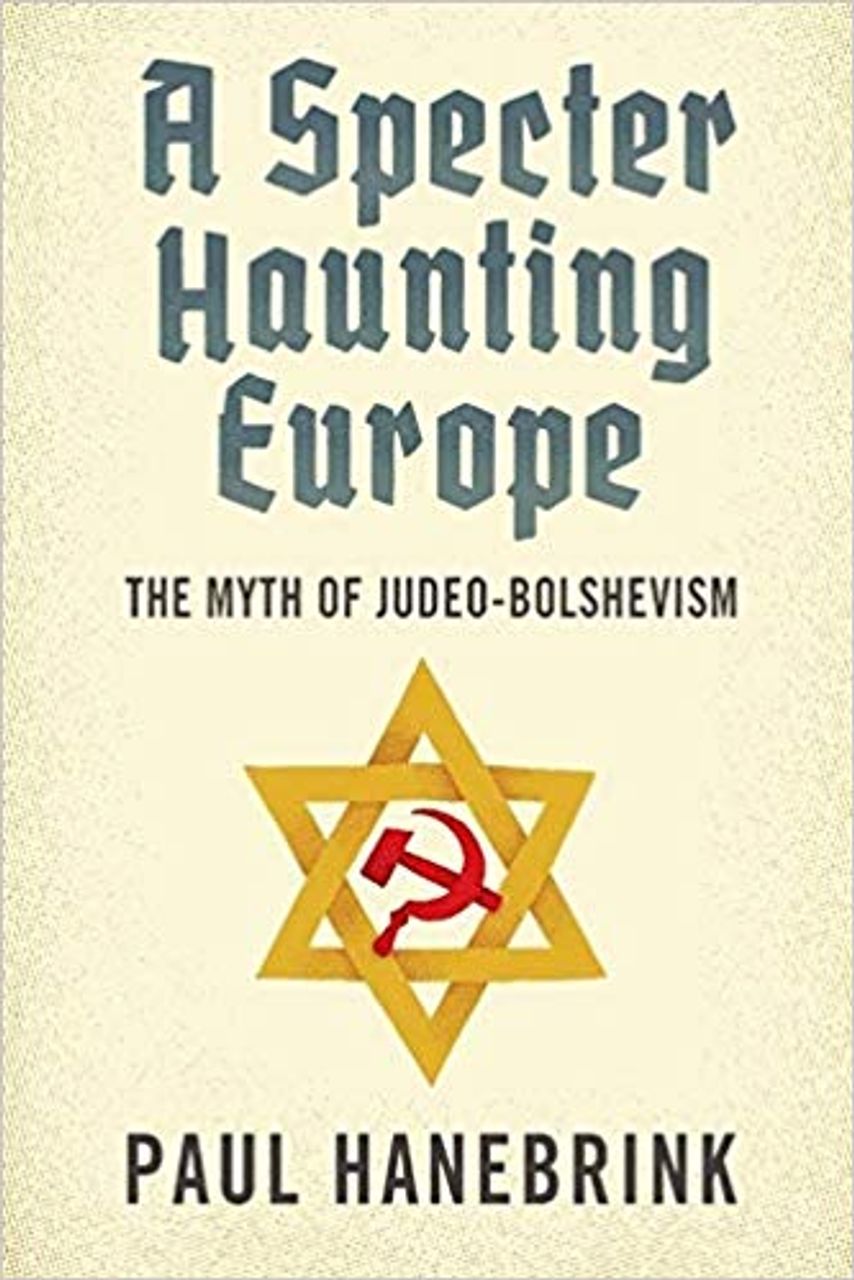 By Clara Weiss in Germany:

Paul Hanebrink: A Specter Haunting Europe. The Myth of Judeo-Bolshevism, Harvard University Press 2018. (Unless otherwise indicated, all quotes are from this book.) The second part of this review will be posted tomorrow.

The new book by historian Paul Hanebrink (Rutgers University) focuses on examining the relationship between the fear of the “specter of communism” haunting Europe, to which Marx and Engels famously alluded in their Communist Manifesto of 1847, and of anti-Semitism.

For much of the book, Hanebrink analyzes the role that the Judeo-Bolshevik myth played in the ideology and crimes of the European far-right in the first half of the 20th century, culminating in the Nazi-led genocide of 6 million European Jews during the Second World War.

His account begins with the revolution in Bavaria, southern Germany, in 1918-19. He details how the Catholic Church, international politicians such as Winston Churchill, as well as the fledgling Nazi movement in Germany, countered the Russian Revolution of 1917 and the German Revolution of 1918-1919 and—in particular, the short-lived Bavarian Soviet Republic—with an outburst of anti-Semitism.

Bishop Eugenio Pacelli, who was stationed in Munich during the revolution, described the Bavarian revolutionaries as “…a gang of young women, of dubious appearance, Jewish like all the rest of them.” Max Levien—who was, in fact, not Jewish—was, to Pacelli, “a young man, of about thirty or thirty-five, also Russian and a Jew. Pale, dirty, with drugged eyes, hoarse voice, vulgar and repulsive, with a face that is both intelligent and sly.” Some 15 years later, he would sign a concordat with Hitler as Pope Pius XII. 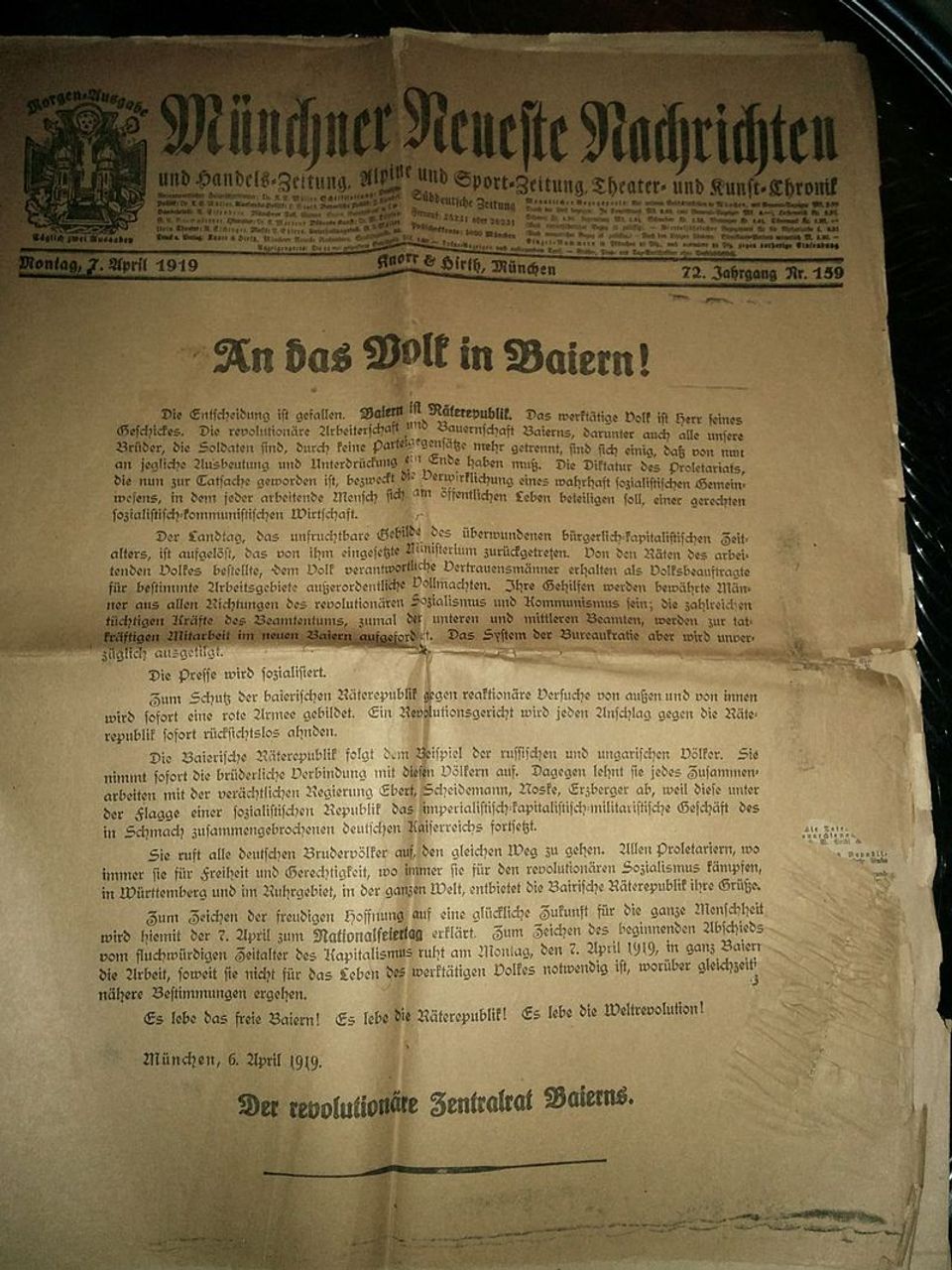 These sentiments were shared by right-wing intellectuals and politicians throughout Europe, in response to the wave of revolutions that swept the continent after World War I. Jean and Jérôme Tharaud, two extreme right-wing French intellectuals, traveled to Hungary in the wake of the revolution led by Béla Kun in 1919. In their book When Israel Is King, they wrote: “On the banks of the Danube a new Jerusalem arose, sprung from the mind of Karl Marx and built by Jewish hands on ancient [messianic] thoughts.” The bloody counter-revolution that followed claimed the lives of at least 3,000 people, roughly half of them of Jewish origin.

In far-right publications, leading figures of the revolutionary movement were “unmasked” as “Jews”. Leon Trotsky, who co-led the Russian Revolution alongside Vladimir Lenin, was typically referred to as “Bronstein”, a name he himself had long ceased to use, while the Polish revolutionary Karl Radek was referred to as Sobelsohn. In their deluded anti-Semitic frenzy, the far-right frequently designated as “Jews” a significant number of revolutionaries who were not Jewish at all, including Lenin,

who had one Jewish grandparent, not making him Jewish according to Jewish law.

Karl Liebknecht, or the aforementioned Max Levien. The terms “Asiatic” and “Jewish” Bolshevism would be used by these forces almost interchangeably. As Hanebrink explains, “The Bolshevik was at once a rootless migrant Jew, the sign of an invading horde from the East, and an Asiatic beast.’’ 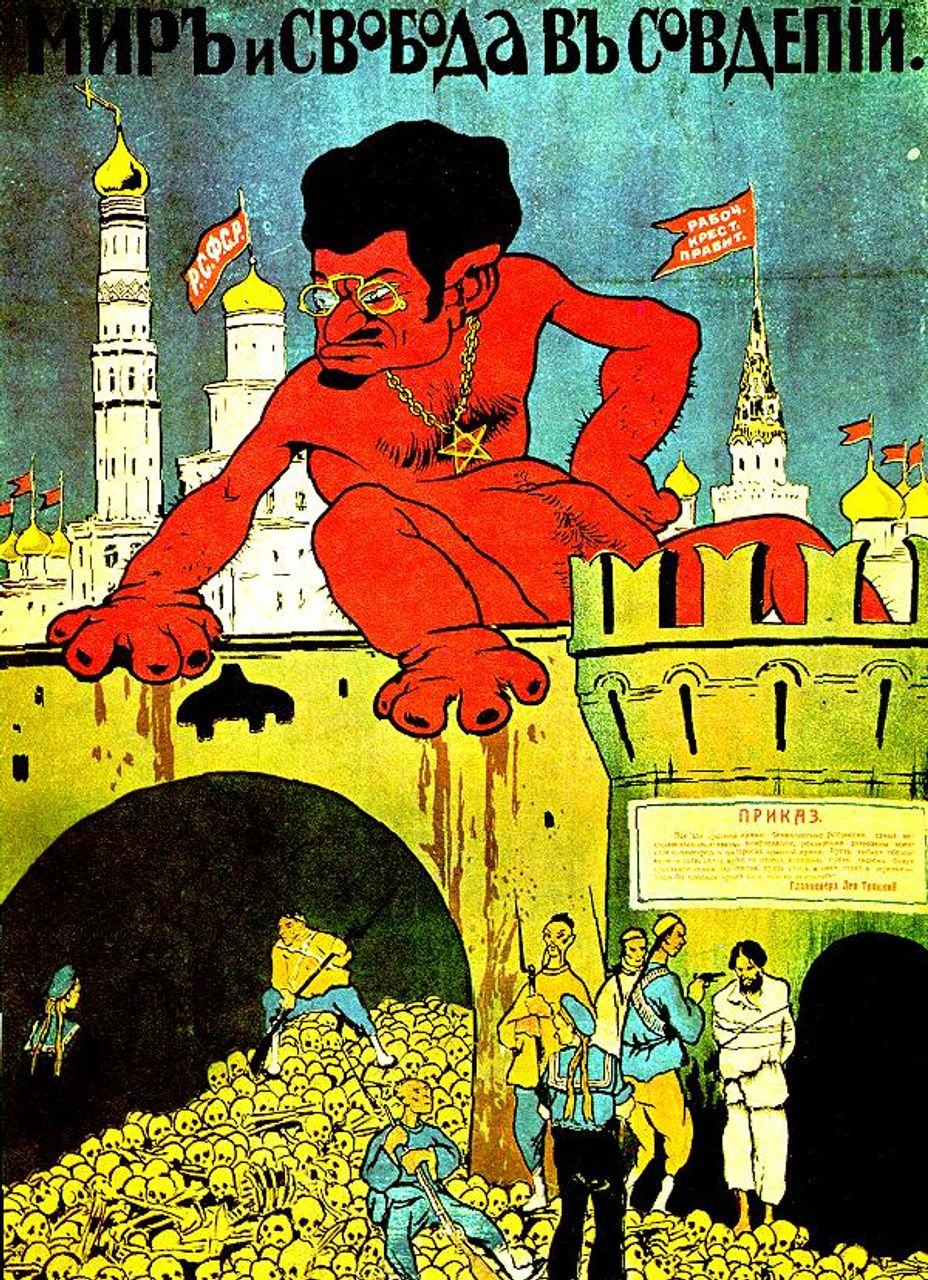 During the Civil War of 1918-1922, launched by the invasion of 19 foreign armies against the fledgling Bolshevik regime, between 50,000 and 200,000 Jews were killed in Ukraine alone, mostly by counter-revolutionary White and Ukrainian nationalist forces. Polish armed forces too, who fought against the Red Army, committed anti-Jewish massacres, including the notorious pogrom of Pinsk, in which 35 Jews were murdered. Poland’s prime minister and foreign minister Ignacy Paderewski would justify this massacre by saying that it was a “matter of pure Bolshevism. We executed the people responsible for the crime, and they happened to be Jews.”

The Nazi movement in inter-war Germany emerged under the direct impact of these counter-revolutions. Both Germany and Austria became centers for the far-right, with nationalist emigres flocking to Vienna and Berlin, in particular, in the wake of the Bolshevik revolution in Russia and the revolution in Hungary. In their anti-Semitic propaganda, they continuously pointed to the “Jewish revolutionaries” in the Bavarian Soviet Republic, as well as in the Soviet Union.

Fused with the geostrategic goals and military and economic machinery of German imperialism, the myth of Judeo-Bolshevism became a central ideological basis for both the war against the Soviet Union—with between 27 and 40 million Soviet victims, the deadliest and most violent war in human history— and the genocide of European Jewry. It helped mobilize fascist regimes and far-right forces across Eastern Europe, including the governments of Romania and Hungary and the Organization of Ukrainian Nationalists (OUN-B), in what the Nazis portrayed as an anti-Bolshevik and anti-Jewish crusade. 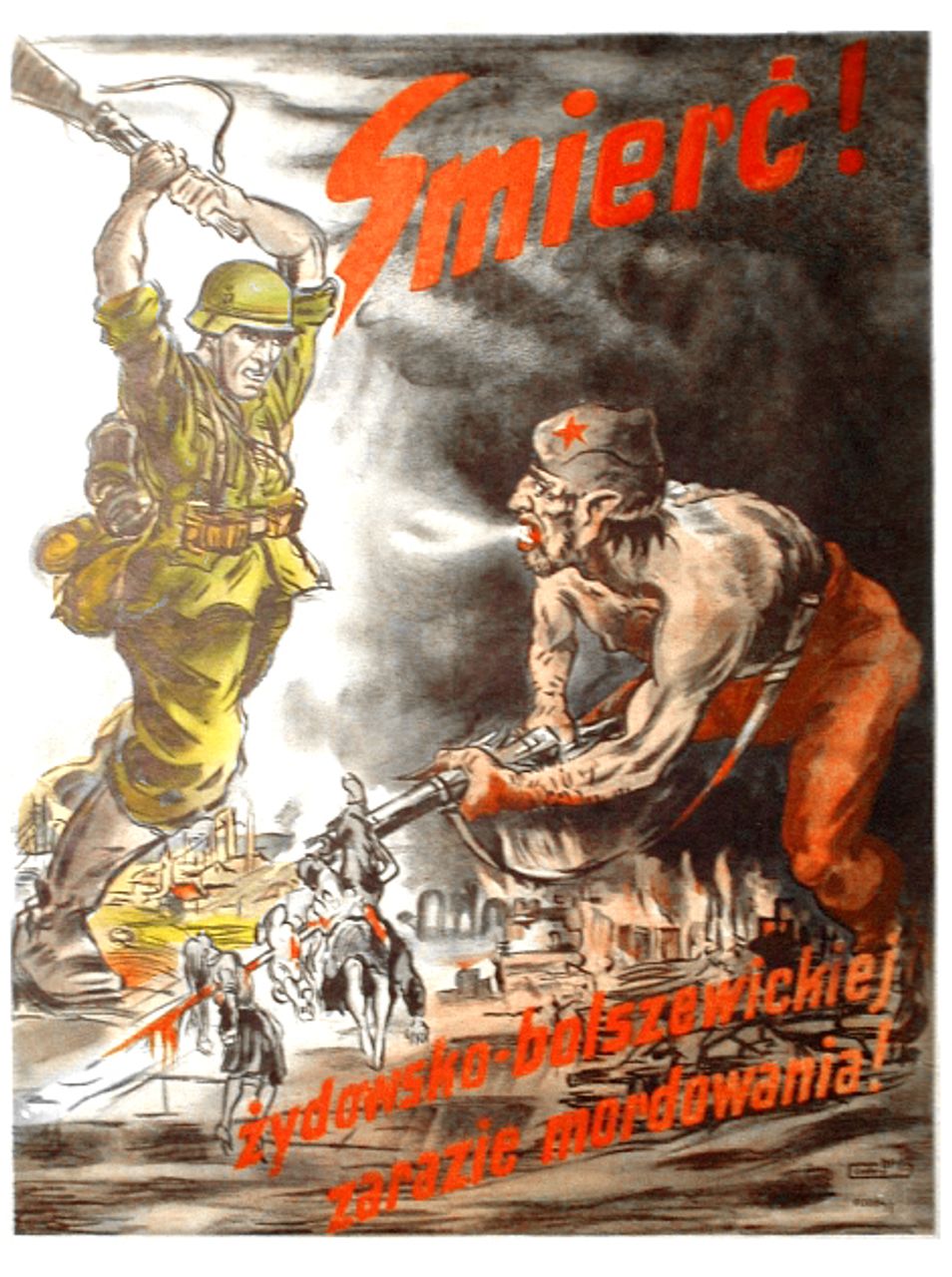 In Ukraine, the OUN-B committed horrific pogroms against the Jewish population—most infamously in Lviv. Romania, under the dictatorship of Ion Antonescu and his fascist Iron Guard, carried out the largest state-sponsored anti-Jewish massacres and pogroms outside of the Nazi-occupied countries. While the Polish far-right was itself targeted by the Nazis, Poland was turned into the main site of the industrial destruction of European Jewry by the Nazis, and saw several horrific pogroms perpetrated by nationalist forces and rural layers. Substantial sections of the Polish bourgeoisie and government-in-exile in London were viciously anti-Semitic. Hanebrink points out that the government-in-exile received reports which “dwelled at length on the problem of Jewish participation in the new Communist regime…[and] labeled Jews collectively as traitors.”

After the end of the war, the “Judeo-Bolshevik myth” in West Germany was adapted to the context of the Cold War. As Hanebrink explains, instead of “Jewish Bolshevism,” former Nazis who reentered the justice system, the media, the diplomatic corps, and the military in West Germany, only had to say “Asiatic Bolshevism” to appear respectable. “While changed political circumstances imposed serious professional consequences on those who openly called the Soviet enemy a Jewish power, the U.S.-led ‘crusade’ to defend Western civilization aligned easily with other aspects of Nazi anti-Soviet ideology.”

Hanebrink mentions the well-known case of Eberhard Taubert, the head and founder of the Nazi “Institute for the Study of the Jewish Question.” He was a close co-worker of Nazi propaganda minister Joseph Goebbels, wrote the script of the notorious Nazi propaganda film “The Eternal Jew” and authored the law forcing Jews to wear the “yellow star.” After the war, he headed a CIA-funded anti-Communist organization, which “drew heavily on themes widely circulated during the Nazi era, including representations of ‘enemies of the people’ as animals or insects. … After 1945, Taubert dropped all references to Judeo-Bolshevism, but he retained every other ideological and symbolic feature of his earlier work.” Taubert remained an influential figure in German politics until well into the 1970s, working as an adviser to the leading Bavarian politician and one-time Chancellor candidate, Franz-Josef Strauß. 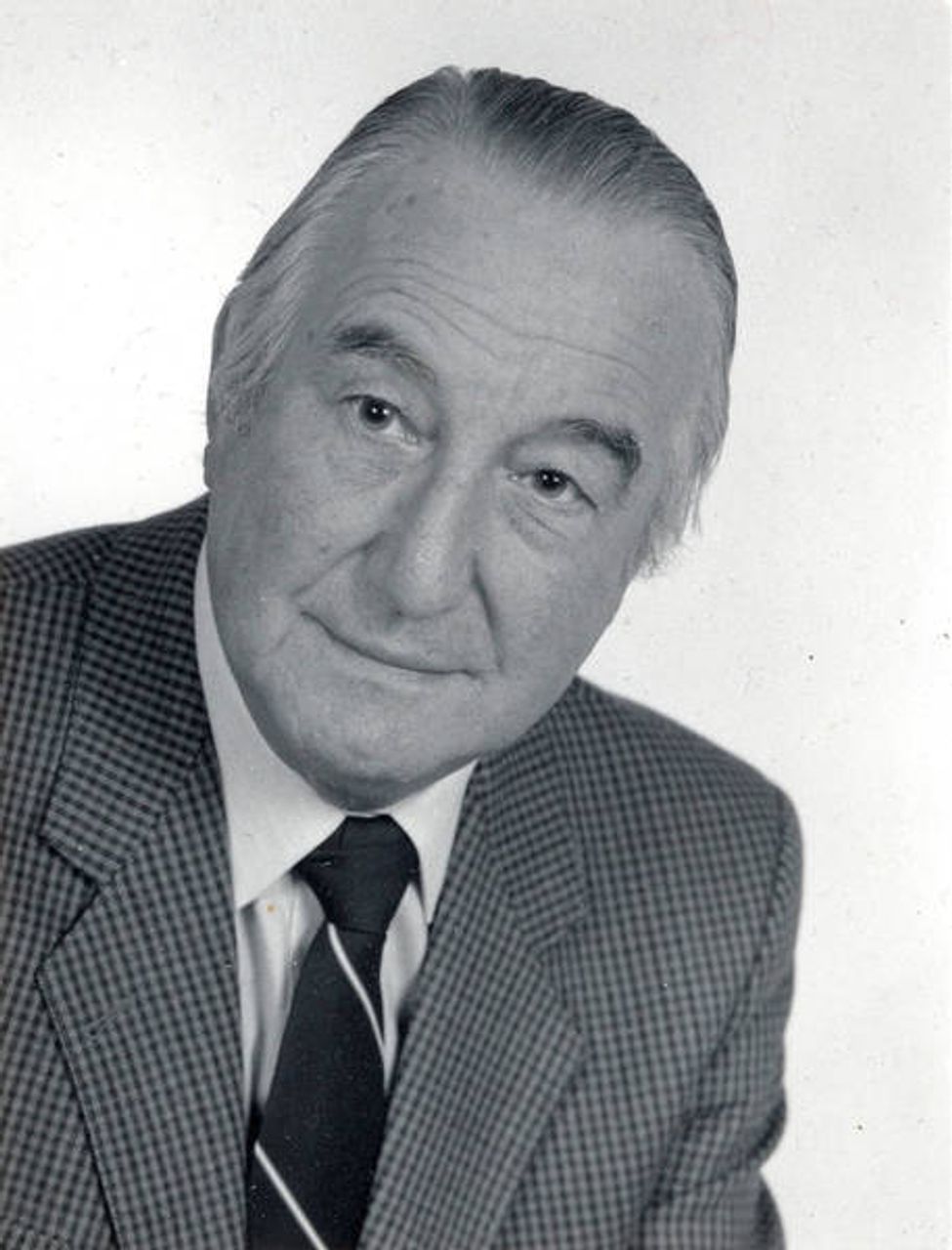