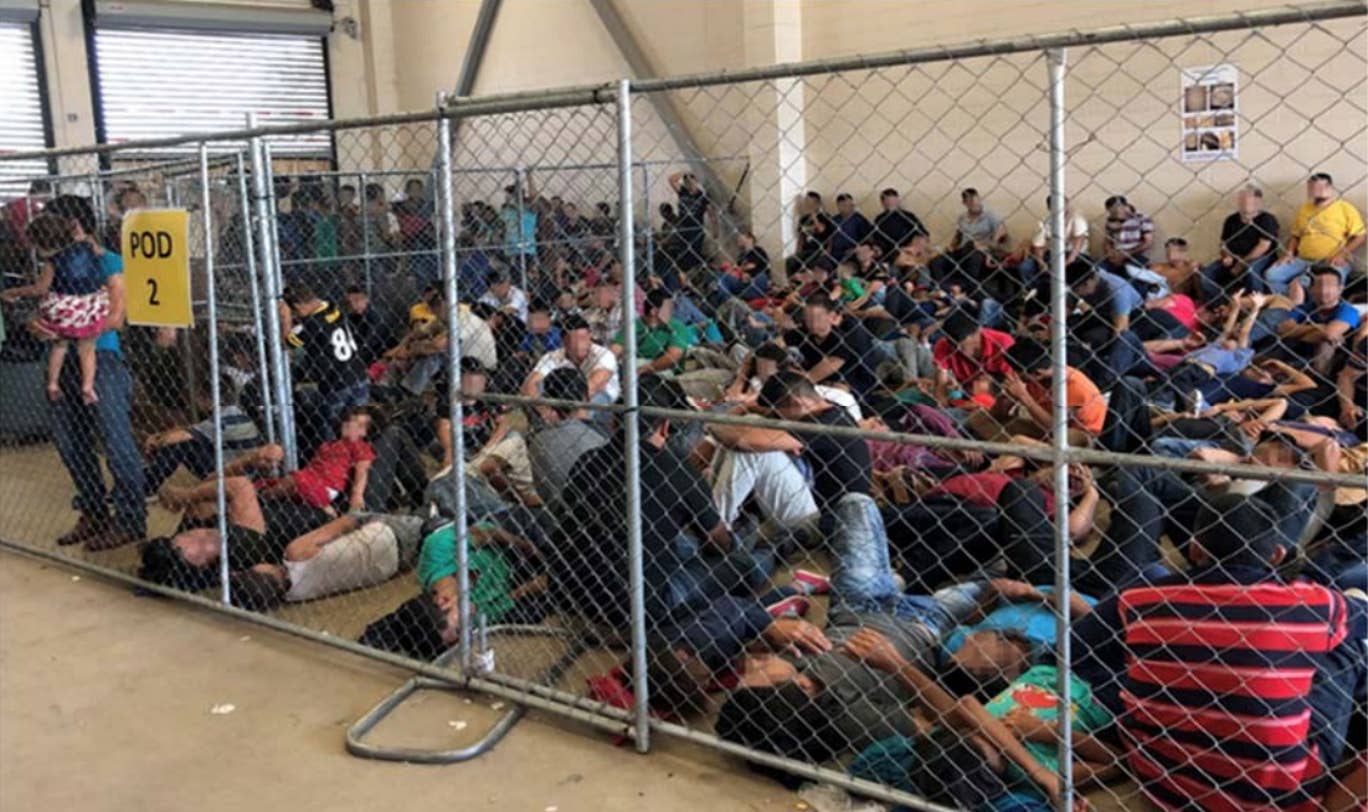 ‘If not now, when?‘ Jews in America see echoes of the Holocaust in immigrant detention centres

‘I’m Jewish, and I refuse to be a good German‘

Outside the Donald W Wyatt detention centre in Rhode Island, inmates knocking on walls can be heard from the street.

With the nation engaged in a deep and contentious debate surrounding immigration detention in facilities like these, the deep smacks were the only way for a call and response with the hundreds of protesters who rallied outside this week:

“We hear you”, the masses organised on the street chanted back, in between Jewish prayers, song, and testimonial to the horrors of the Holocaust that demonstrators worry could be in the beginning stages of a repeat in the United States.

Megaphones and signs in hand, the protesters with the Jewish group Never Again is Now marched on, joining a culture of civil disobedience that has thrived in the United States over the past two years, and one with particular resonance in the week of 4 July, the country’s Independence Day. Just metres away, migrants seeking freedom were locked up.

Reflecting on a period marked by a crackdown on immigration, culminating in recent weeks with reports of widespread neglect and abusive conditions for migrants and asylum seekers, they said they could not stand by as the necessary ingredients for an American Holocaust were gathered together. It is a movement and concern that has been gaining traction, with Jews across America vowing that “Never Again is Now”.

“I’m Jewish, and I refuse to be a good German,” Liza Burkin, a 30-year-old urban planner from Providence said, about half an hour before she and 17 others were taken into police custody for refusing to move away from an entry zone for the detention centre, which is one on an extensive list of private prisons known for holding migrants for Immigration and Customs Enforcement or other government agencies.

She continued: “We are focused way too much on the end of the Holocaust, and not as much on the beginning. And this is directly comparable.”

The Wyatt detention centre is the first privately run detention centre in America, and was built in the 1990s in Central Falls — one of the smallest towns in the smallest state of the entire country. The facility houses 730 male inmates and another 40 females, meaning it would technically account for around 5 per cent of the roughly 20,000 residents in the suburban Providence city.

As controversies have mounted across the country in the past two years, Wyatt has been marred in that mix. In April, a federal judge ordered that city officials had no authority to end the facility’s contract with Immigration and Customs Enforcement, which was attempted after it was discovered that the detention centre was holding 133 migrant detainees as a part of the Trump administration’s immigration policy.

It’s a story that has been heard across the country, from Homestead, Florida, where child migrants have been marched in orange hats between large tents and in front of presidential candidates, to the detention centres in Texas that congresswoman Alexandria Ocasio-Cortez visited last week and reported migrants being subjected to “psychological torture”, told to drink water from toilets, and denied basic needs.

“It is absolutely unfathomable that today in the United States there are children and others who are seeking asylum, who are coming here to escape violence and persecution, and they are being put into detention centres without the ability to take care of themselves, or being taken care of,” said Diana Fox, one of the 18 protesters who were later arrested outside Wyatt.

Ms Fox, like most of those in Central Falls on Tuesday — alongside the near three dozen who were arrested at a similar rally in New Jersey last weekend — said her family was directly impacted by the Holocaust. It’s why she was willing to get arrested: “This is reminiscent of the most horrible situations that we have seen in this country.”

The rows of razor wire installed on the chain link fence outside the facility stand in sharp contrast to its surroundings: on Tuesday, little girls attended soccer training just across the street, in a sprawling field that also hosts baseball and football practice.

In some respects, that contrast is kind of the point. While much of the media coverage understandably focuses on those facilities in Texas or Florida where migrant flows are expected, the fact that Wyatt has been tapped to hold some dozens of migrants at any point in time shows that Donald Trump’s immigration policies have a reach far beyond the border.

The problem, activists say, is not just that these detentions are taking place, but also that they have quietly crept into communities across the country and far away from the border, just like Central Falls.

Rhode Island, with its lush deciduous trees and curving New England roads, bears little resemblance to dusty Texas. But they have both become unwitting homes for migrants who have been arrested by the Trump administration’s zero-tolerance immigration policies that essentially criminalises all unwarranted border crossings, even when those individuals claim asylum upon arrival.

In recent weeks, the impact of those policies have become ever more clear. In facilities across the country, migrants have reportedly been subjected to harsh and inhumane treatment. Children have been denied soap and toothbrushes. Migrants have been packed into facilities meant for a third the population. They have been sleeping on the ground outside, and allegedly told to drink water from the toilet.

“We can’t just sit here knowing what is going on inside these camps, the deplorable conditions, and do nothing because it could happen,” said Wendy Grossman, a 57-year-old mental health worker in Providence, arguing that the detention facilities in the US echo Nazi concentration camps. “It could go really wrong in that direction.”

Ms Grossman added that she believes every moment that immigrants are treated inhumanely is a cause for alarm: “It feels pretty urgent. Like, if not now, when?

On Tuesday, hundreds of demonstrators descended upon the Wyatt facility from 6pm until dusk, and did not cower at the sight of police officers.

Many protesters shared their family stories, saying that the Holocaust that still has ripples in their lives.

“They’re concentration camps. That’s what they are,” Aaron Regunberg, a 29-year-old employee with the City of Providence, and a former state representative, said.

Mr Regunberg was one of those arrested: “We’re living in a moment where we cannot afford to go about our lives business as usual. Our government is enacting escalating violence on our neighbours. They’re using our tax dollars to separate parents and their children. They are operating concentration camps with horrendous, appalling, unbelievable conditions under our flag.”

As the 18 were arrested, the chants and speeches continued, with rabbis citing the book of Deuteronomy, extolling a theological imperative to love immigrants, to feed them, and to give them clothing, as God does in the Old Testament book.

“This is our fight. This is our responsibility,” one protester yelled through a megaphone.

“We hear you”, the protesters yelled back.

CONCENTRATION CAMP SURVIVORS RALLY FOR DETAINED IMMIGRANTS My 95-year-old grandfather, Homer Yasui, has never been one to dwell on trauma. He’s described his incarceration matter-of-factly many times: how the FBI took his father away after the Japanese attacked Pearl Harbor, and how the government ultimately sent his family to a concentration camp. He’s outraged now as he watches history repeat itself. [HuffPost]