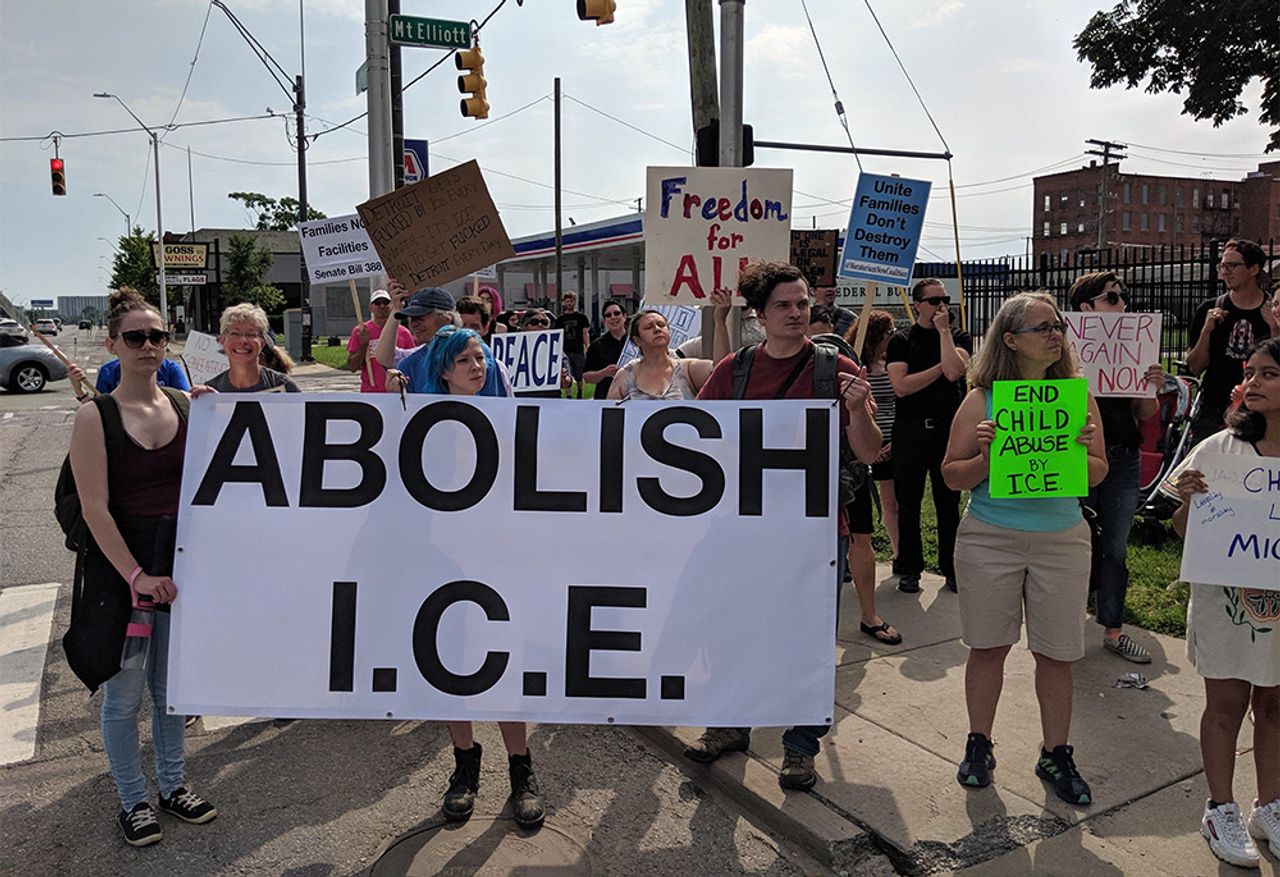 By Zac Corrigan in Detroit, USA:

“We can definitely unite with Central American workers!”

“Screw the BBQ and Fireworks this 4th!”, autoworker Melissa Crook wrote Tuesday evening in a Facebook event announcement. “We have a government kidnapping children and locking them up in cages […] Make no mistake, these are Concentration Camps! This is a crime against humanity and we cannot and should not stand for this.”

Thirty-six hours later, on the morning of July 4, over 150 people joined her in front of the ICE Enforcement & Removal Operations Field Office in downtown Detroit to register their opposition to the most recent wave of horrific attacks on immigrants by the Trump administration.

The spontaneous protest follows a number of provocative developments in the war being waged against immigrant workers by Trump and his fascistic immigration and border forces, including: the drowning of a Honduran father and his infant daughter in the Rio Grande after the family was denied asylum in Brownsville, Texas; new revelations of the abusive and unsanitary conditions, tantamount to torture, which children and adults are being subjected to inside a massive network of concentration camps; and the taunting of members of congress by ICE officers during a visit to camps in Texas, during which fascistic border guards openly denied detainees access to water and told them to drink from the toilet. 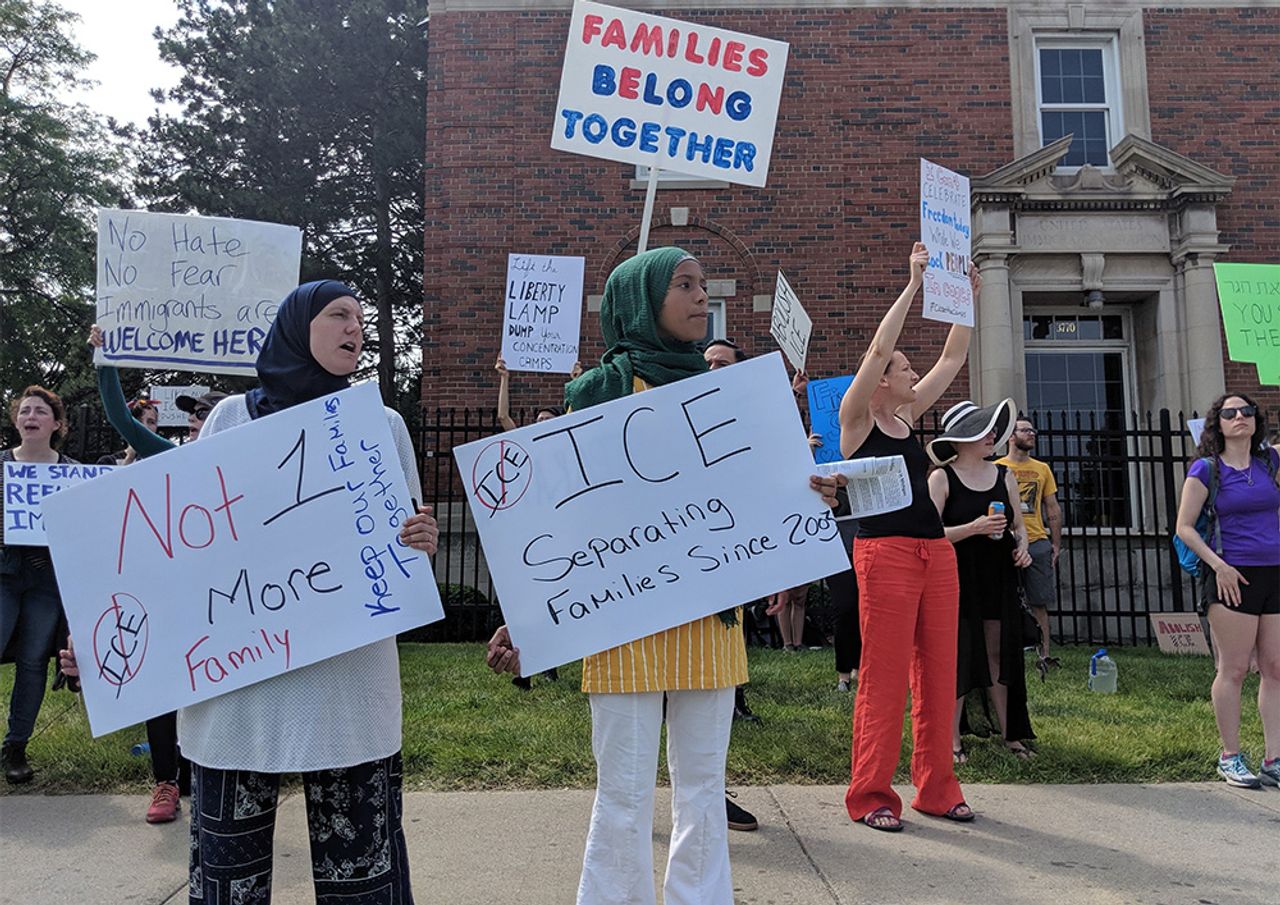 “On Tuesday, I was at work listening to news stories about the border”, Melissa told the WSWS at the protest, “and I was hearing about the children with no access to toilets, no showers for days on end, women being told to drink out of the toilet. I didn’t think it was right to celebrate Independence Day when migrants aren’t free. So I urged a protest on the Fourth of July. I got 300 shares in 36 hours. And people showed up! It really restored my faith in humanity. Social media is powerful.”

Asked what message she would send to workers escaping violence and poverty in Mexico and Central America, Melissa said, “I think I speak for the majority of Americans when I say that we support you and we love you. You are welcome here! This is an abhorrent administration enacting inhumane torture policies on people that are fleeing violence—violence created by the US. I am so sorry you have to deal with this, but it’s going to get better.” 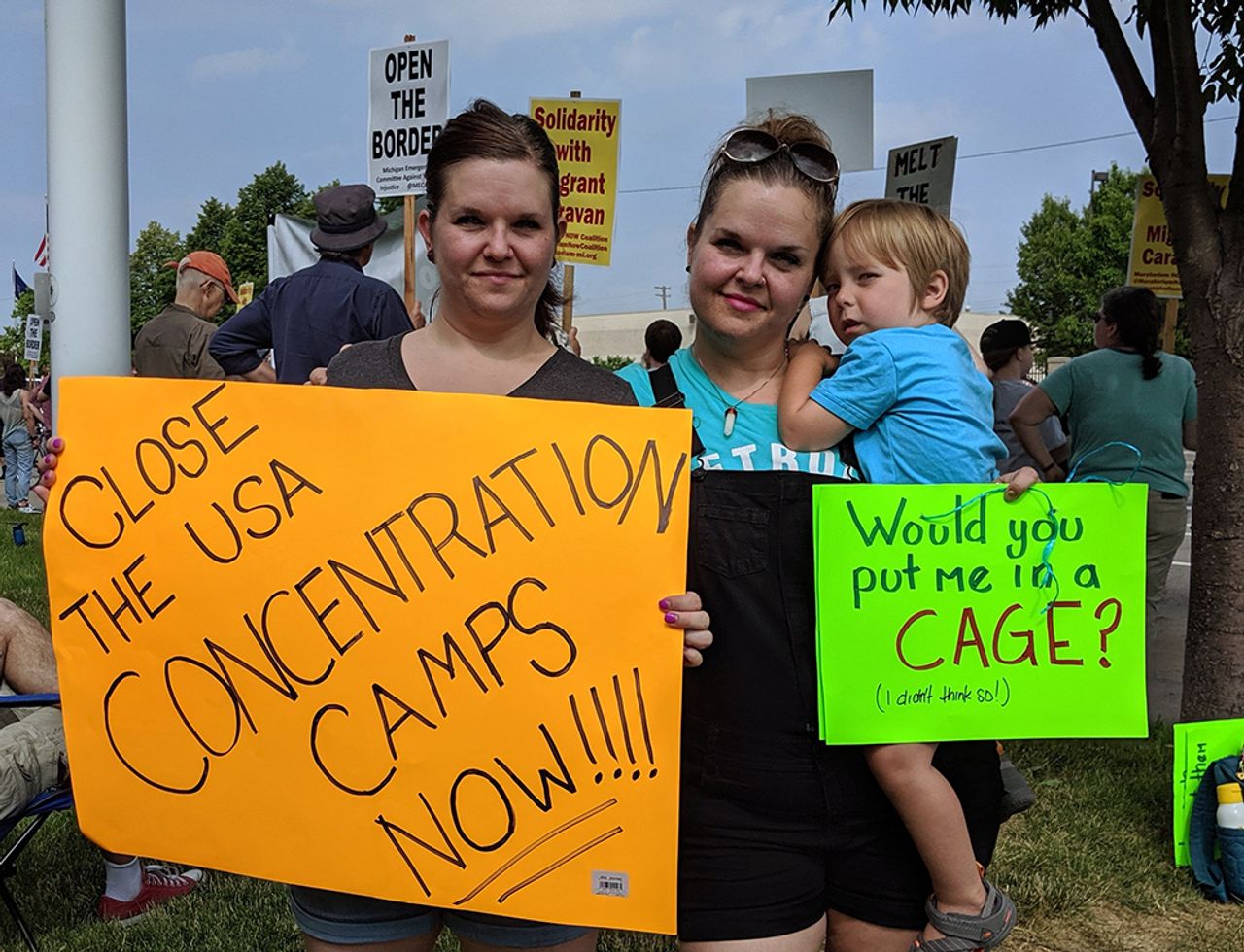 Melissa agreed that national borders are fundamental to the strategy of capitalists to pit workers against one another in a “race to the bottom.” She explained, “I work in the auto industry, and I know that workers in Mexico make far less than we do here. And that means that if we want to keep jobs here, we have to take a cut.” She continued, “My father was a low-wage worker in 1978 here in Detroit. He made $9 an hour, which is the equivalent to $36 an hour today. And they’re demanding a minimum wage now of just $15 an hour? Come on, that’s ridiculous! It should be way more!” 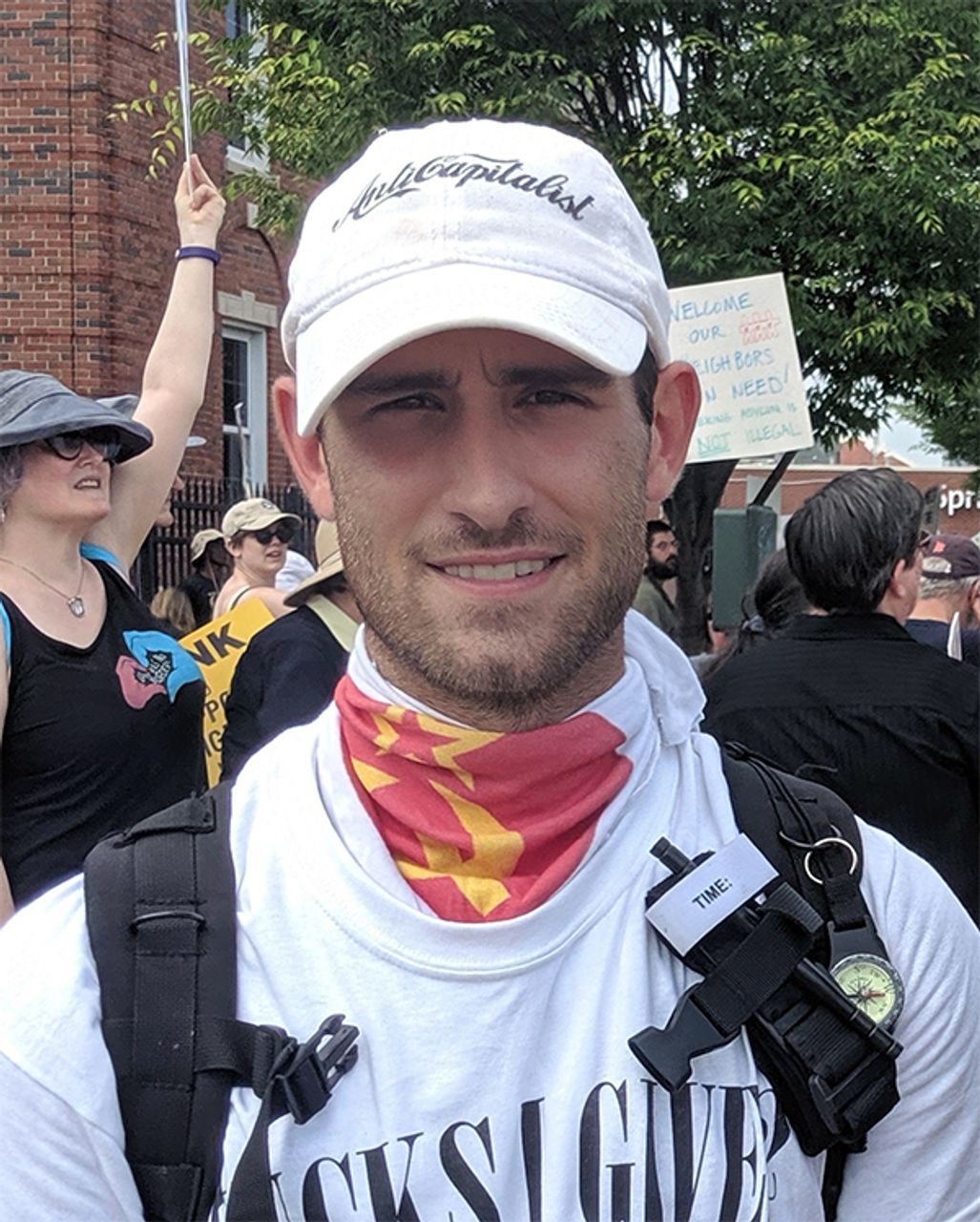 Jacob, 24 and Jesse, 22 came from the outer suburb of Waterford Township to attend the protest. They both work as roofers. “I think this protest is great,” said Jacob. “The turnout here really shows that people oppose what’s going on. We should build this up on a national scale.”

Jesse and Jacob both said they thought the attacks on immigrants stemmed from white supremacism, and a government that “doesn’t view other races as people”. This began a discussion of how racism has been consciously cultivated by the ruling class throughout history to keep workers divided against one another, while the process of globalization has integrated workers of all races and nationalities in an international system of production. 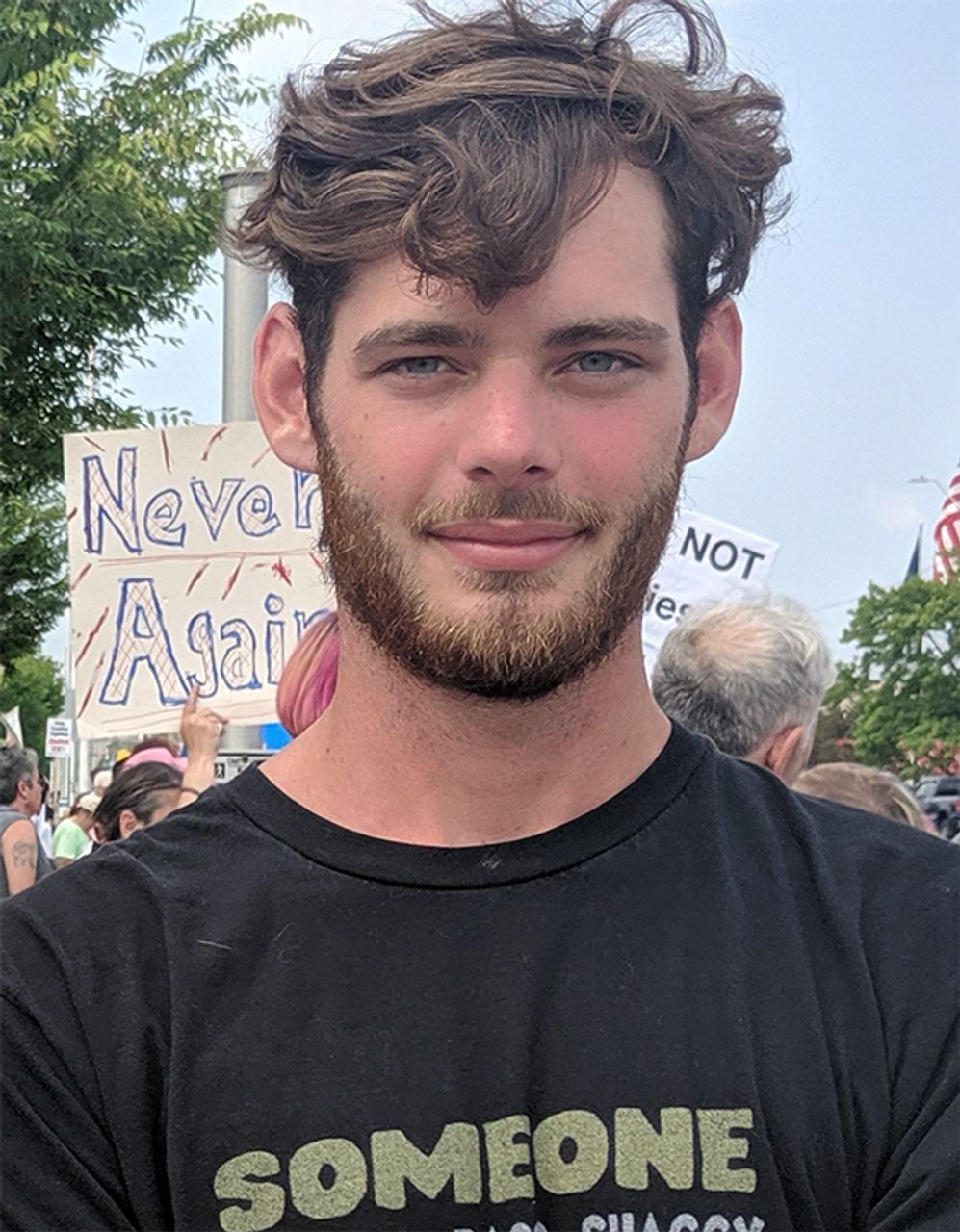 Jacob said he thought the protest showed that American workers, “can definitely unite with Central American workers. We have much more in common than what separates us.” Jesse added that workers of all races in his generation, “really can’t afford to live anymore. Health care, insurance, being able to afford a home and a family, it’s just not doable.”

As for the way forward, Jacob proposed “we should take over the means of production! I think there needs to be an actual fight. Protests like this can bring awareness to an issue, but then there comes a time in history where things need to change. America needs to have a revolution, for the native workers and the immigrants.” Jesse concluded, “We outnumber them [the ruling class]. And it’s time to get it done.”

A team from the International Youth and Students for Social Equality (IYSSE) attended the rally and handed out the recent WSWS statement “No to concentration camps in America!” The statement explains the crucial role played by the Democrats, who far from organizing mass opposition to attacks on immigrants, last week voted for $4.5 billion to further militarize the border and expand the network of concentration camps.

The statement calls on “workers and students to organize protests, strikes and demonstrations in defense of immigrants,” and for the “formation of defense committees in working-class neighborhoods, at schools and at workplaces to safeguard immigrants and mobilize the working class against the bipartisan assault on democratic rights.”

After the rally, IYSSE member Sam said, “I think there’s something really interesting about this protest being called by someone who doesn’t seem to be part of any particular political group. People are being drawn into political life by events like the attacks on immigrants, the buildup of a police state, and the deterioration of social conditions. And they more and more are coming to see that the entire political establishment … offers no way forward.

“But what is needed,” he concluded, “and this is what the IYSSE has contributed here today—is a socialist perspective and program that can not only stop ICE and guarantee full rights to immigrants, but can also unite workers all over the world in a common struggle for social equality and an end to war and imperialist oppression.”

8 thoughts on “Detroit, USA against Trump’s prisons for immigrating”