This 3 September 2018 video from the USA says about itself:

Amazon has a reputation among customers for speed and efficiency, but some employees at its fulfillment centers are speaking out to NBC News alleging the company prioritizes speed over worker safety. 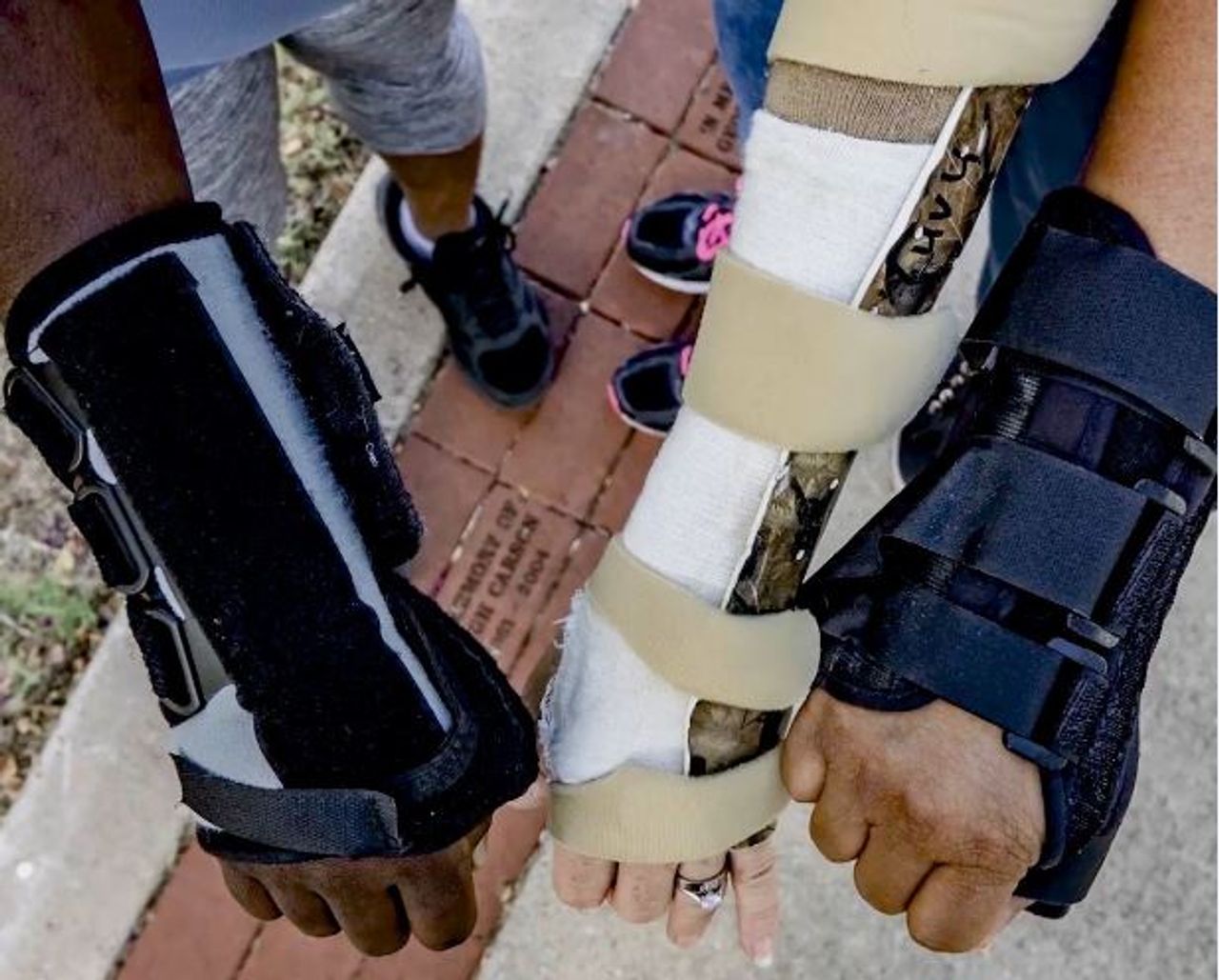 Amazon drives its workers to suicide

By Tom Carter in the USA:

Documents reviewed by the World Socialist Web Site establish that hundreds of workers have been injured at Amazon’s DFW7 fulfillment center in Fort Worth, Texas.

Former Amazon worker Shannon Allen, who blew the whistle about conditions inside DFW7 in an exposé published on the WSWS last May, was one of 567 workers injured over a two-year period. She successfully demanded and obtained records relating to other injuries at the warehouse, which the company was required to maintain under federal Occupational Safety and Health Administration (OSHA) regulations.

OSHA records relating to DFW7 indicate that there were 318 work-related injuries at the facility in the year 2017. In 266 of those cases, the injury was sufficiently serious to cause the worker to miss work days. There were 7,968 work days lost as a result of these injuries, in addition to 11,170 work days that injured workers spent at different jobs or with restrictions as a result of their injuries.

The DFW7 facility has a workforce that fluctuates between approximately 3,500 and 5,000, with additional workers being hired on for “Prime week” as well as the winter holidays.

The vast majority of the incidents are described in the logs as “sprain/strain” injuries. But the catalog of injuries at DFW7 also includes concussions, broken bones, lacerations, “crushing/smashing” injuries to various body parts, “avulsion” (meaning skin torn off), “electrical shock,” “foreign body/puncture” injuries and “eye injury/vision loss/blindness” injuries, among others.

Each of these hundreds of entries represents a terrible ordeal for the worker and his or her family: the initial shock and pain of the injury, wait times in doctors’ offices, long calls through automated phone trees, the bureaucratic nightmare of a workers’ compensation system rigged in favor of the employers, and the psychological stress for the worker as well as family members as income goes down and expenses go up. Workers begin to miss payments on insurance, utilities, car financing and rent. The threat of bankruptcy and homelessness looms.

Amazon operates more than 75 fulfillment centers and 25 “sortation” centers in North America. If there were hundreds of injuries a year at one facility alone, that suggests that the number of workers injured at Amazon facilities in North America could be in the tens of thousands annually.

In both 2018 and 2019, Amazon was listed on “The Dirty Dozen” list maintained by the National Council for Occupational Safety and Health (National COSH), highlighting American companies that “put workers and communities at risk due to unsafe practices.”

Amazon was the first entry in the press release accompanying the 2019 report, which stated: “Six worker deaths in seven months; 13 deaths since 2013. Reports of a high incidence of suicide attempts; workers urinating in bottles and workers left without resources or income after on-the-job injuries.”

Amazon is notorious for its internal “gamification” regime, under which the pressure on workers to work as fast as possible is cranked up to the maximum, aided by the latest advances in technology, psychology and technique.

Workers are subjected to monitoring and recording throughout the work day. Cellphones are banned, and workers are constantly being prompted to finish each task. They are pressured to compete with each other and “make rate”, i.e., reach and exceed arbitrary numerical targets for work completed every hour.

While the number of injuries Amazon logged at DFW7 seems high, in at least one other instance Amazon was cited for under-reporting injuries in its OSHA logs. In January 2016, a New Jersey fulfillment center received a citation from OSHA investigators for “not recording 26 instances of work-related injuries and illnesses” on the required OSHA logs.

Shannon recalls one worker at DFW7 whom she drove to the emergency room. The worker was suffering from high blood pressure and exhaustion from attempting to “make rate,” but that worker’s name is omitted from the DFW7 logs. Another worker who was struck with a 300-600 pound cart and suffered from a pinched nerve was recorded as having only a “bruise.”

The Texas workers’ compensation regime is particularly unfavorable to workers, even when compared with similar systems in other states. An in-depth report in the journal of the American Bar Association (ABA), titled “Insult to Injury: Texas Workers’ Comp System Denies, Delays Medical Help,” cited multiple attorneys practicing in the state who believed that “the workers’ comp system in Texas has become captive to the insurance industry.”

Attorney Richard Pena, former president of the State Bar of Texas, a former member of the ABA Board of Governors and former president of the American Bar Foundation, was quoted as saying: “Look, the real problem here is that insurance companies deny claims and medical treatment over and over, disputing claims carte blanche. If the treatment request from a doctor is denied, it usually ends there.”

The insurance carriers have implemented a practice of hiring so-called “peer review” doctors to dispute the opinions of the doctors who actually examine and treat the workers. The ABA report describes how a particularly infamous doctor who worked in that capacity was nicknamed “Dr. No” because of his reputation for disputing claims. These “peer review” reports are then invoked by the insurance companies and claims administrators to deny claims and block services and compensation for workers.

Shannon Allen experienced this system first-hand. When she was first injured in October 2017, she did not even know that a workers’ compensation system existed. She learned about the system only through her son three weeks after the injury. Management “reluctantly typed up the paperwork” after she demanded it.

The doctors to whom Amazon sent Shannon seemed to want only to prescribe narcotic pills, minimize her injury and get her back to work. Meanwhile, her compensation payments amounted to $211 a week, later adjusted to $246 per week, which she did not start receiving until weeks after her injury. Upon returning to work in January 2018, she was injured a second time at the same station.

She switched doctors after the second injury and a new doctor concluded that her injury was more serious and might require surgery. However, within a week Amazon’s workers’ compensation claims administrator Sedgwick had orchestrated a “peer review” and determined that Shannon was not injured at all and her symptoms were the result of her age.

In Shannon’s case, the so-called “peer review” was conducted by a person who never saw her or examined her. One particularly Kafkaesque touch was that, as one basis for his opinion, the “peer review” doctor claimed he could not read another doctor’s handwriting on Shannon’s medical records.

After workers’ compensation payments were stopped in May of last year, Shannon hired an attorney. But the attorney was only able to secure an award of five percent of her wages as back pay, less attorney’s fees and costs, totaling approximately $1,700. By July, Shannon was homeless and living in the DFW7 parking lot.

On Amazon’s OSHA logs, Shannon is just one of hundreds of DFW7 workers with the words “sprain/strain” next to their names. These logs vindicate entirely Shannon’s decision to blow the whistle about DFW7 on the World Socialist Web Site.

According to data maintained by the US Bureau of Labor Statistics, approximately 2.8 million non-fatal workplace injuries were reported in the private sector in the United States in the year 2017, which is the last year for which statistics are available. This figure excludes federal, state and local jobs, as well as injuries that were not reported by the employers. Even so, it represents a rate of about three out of every hundred full-time workers annually.

Workers’ compensation systems, which were implemented state-by-state as social reforms a century ago, have been hollowed out over recent decades. A 2017 statement by the American Public Health Association (APHA) observed, “Changes in state workers’ compensation programs over the past 20 years have made it increasingly difficult for injured workers to receive the full benefits to which they are entitled.”

As a result, on average, employers now pay only about 21 percent of the financial cost of workplace injuries. The overwhelming share of the cost is borne by workers and their families.

The epidemic of workplace injuries, the callous mistreatment of workers after they are injured, and the rigged workers’ compensation systems represent major social and political issues confronting the entire working class. But the issue of compensation is simply ignored by the two big-business parties, both of which have presided over the gutting of compensation for injured workers in the name of making their states “friendly” and “attractive” to business.

As for OSHA itself, a watchdog and regulatory agency established under President Richard Nixon in 1970, successive Republican and Democratic administrations over decades have starved it of funds and staffing. Charged with ensuring the safety of 130 million workers with a small staff of around 875 inspectors, OSHA is widely regarded as toothless and powerless to act as any significant brake on abusive practices.

OSHA suffered a further decline under President Donald Trump, who implemented a hiring freeze. According to the 2019 National COSH report: “It will take 158 years for OSHA to inspect all workplaces under its jurisdiction.” The median fine following a workplace fatality is $7,500.

Amazon is by no means an outlier, but has merely perfected its own variation of exploitative techniques that are being developed and emulated around the world. Also on the 2019 “Dirty Dozen” list was an XPO Logistics warehouse in Memphis, Tennessee, where a “worker died and six women have suffered miscarriages in an overheated, high-stress warehouse.” The high incidence of suicide attempts at Amazon in the US recalls the series of suicides in 2010 by Foxconn workers at the Longhua plant in Shenzhen, China.

The capitalist parties and their politicians, the regulatory agencies, the courts and the corporate media will not help. The fight for safe workplaces and to take care of injured workers must be taken up by workers themselves.

The degrading and tyrannical rating systems, together with the constant pressure and surveillance, must be replaced with practices that emphasize workers’ long-term comfort and safety. A worker who is injured should receive full pay, support for family needs and medical treatment at the company’s expense. Whenever any worker is injured there should be accountability and consequences for management, including a workers’ inquiry and a determination as to whether the injury was preventable.

Given the enormous fortunes piled up by individuals such as Amazon CEO Jeff Bezos, whose $130 billion fortune made him the world’s richest man at the time Shannon became homeless, the availability of adequate resources is beyond doubt. What is necessary is the political mobilization of workers to defend themselves and each other by forming workplace committees to unite with other sections of the working class internationally and impose workers’ control on production as part of the struggle to replace capitalism with socialism.

23 thoughts on “Amazon injures many workers”