REPRESENTATIVE ALEXANDRIA OCASIO-CORTEZ, Democrat-New York, fired back on Thursday at House Republican Leader Representative Kevin McCarthy, Republican-California, who had demanded that she apologize for her use of the term “concentration camps”.

Read the full story by Nicholas Ballasy for The Intercept.

No to concentration camps in America!

Along the US-Mexico border and in immigrant concentration camps within the United States, the Trump administration is committing crimes so depraved and sadistic that they have stained every branch of government, both parties and the entire political establishment with the mark of infamy. Hundreds of millions of people around the world are sickened by the rot at the core of American capitalism.

Recent reports of conditions at detention facilities housing thousands of immigrant children expose systematic dehumanization and violence against children who have been torn from the arms of their parents and relatives.

Dr. Dolly Lucio Sevier, a pediatrician who visited concentration camps in Texas last week, told ABC News that the jails are akin to “torture facilities”, and that children are forced to endure “extreme cold temperatures, lights on 24 hours a day, no adequate access to medical care, basic sanitation, water or adequate food.”

A group of attorneys visiting detention centers in Texas last week witnessed rooms full of children without toothbrushes, diapers, sleeping pads or adequate food or water. Many children are sick with influenza and left untreated.

Guards have forced older children to look after babies and denied the children the right to wash their hands or wash baby bottles. Children defecate near where they eat and are denied access to soap. Dr. Servier said the conditions are “tantamount to intentionally causing the spread of disease.”

One lawyer saw guards get furious at children and take away sleeping pads because they lost a lice comb. A recent lawsuit revealed that guards refer to immigrants as “tonks” because of the sound a heavy metal flashlight makes when guards beat immigrants on the head. Agents in South Texas are turning away donations of diapers, soap and toys made by concerned local residents. Six children have died in custody in recent months.

The latest individual victims of the government’s war on immigrants are Óscar Alberto Martínez Ramírez, a 25-year-old father, and his daughter, Valeria, who was 23 months old when the two drowned in the Rio Grande as the girl’s mother, Tania Vanessa, watched in helpless horror from the shore. 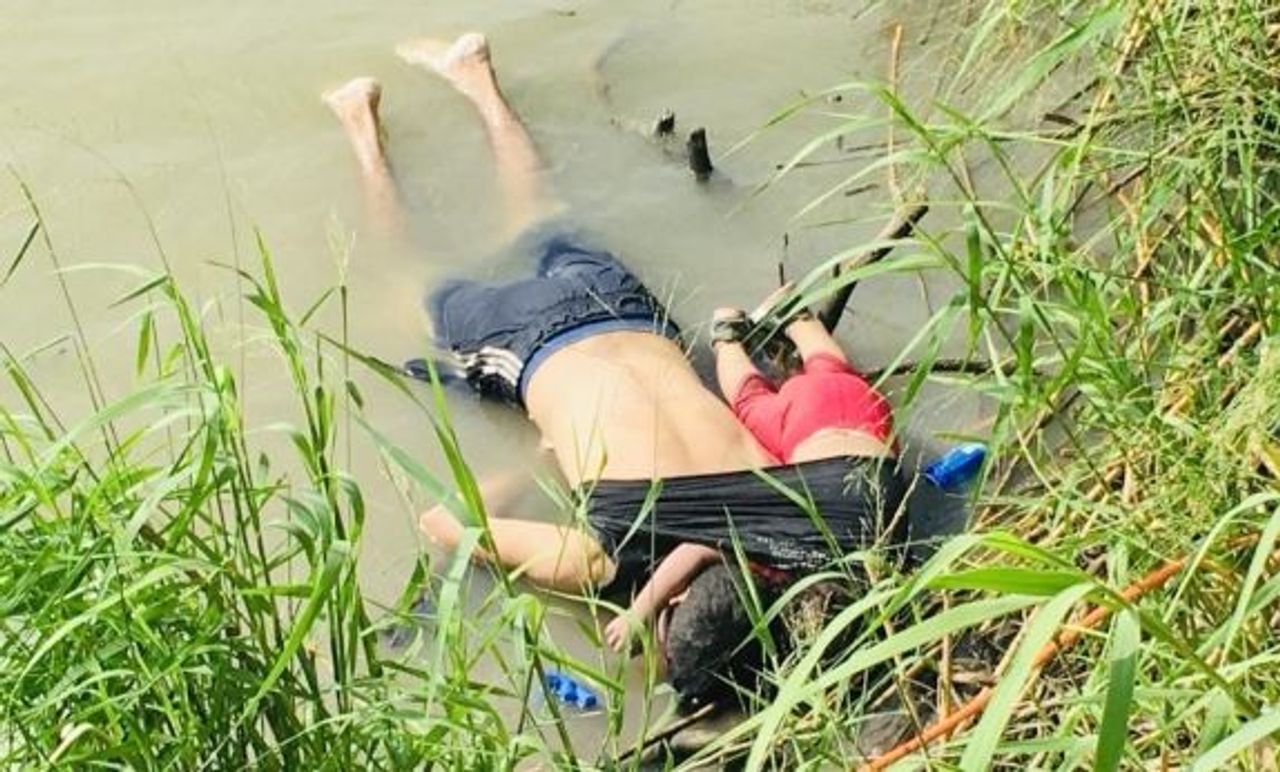 The family decided to cross the river after US authorities barred them from applying for asylum from their native El Salvador at the port of entry between Brownsville, Texas and Matamoros, Tamaulipas in Mexico.

The image of Óscar and Valeria’s lifeless bodies recalls a passage from Harriet Beecher Stowe’s 1852 novel Uncle Tom’s Cabin, when Eliza, a runaway slave followed by slave catchers, clasps her child to her body and leaps between pieces of floating ice to cross the Ohio River and to freedom:

With wild cries and desperate energy she leaped to another and still another cake; stumbling—leaping—slipping—springing upwards again! Her shoes are gone—her stockings cut from her feet—while blood marked every step…

Uncle Tom’s Cabin sold more copies than any novel in the 19th century, and the country was transformed by what it learned of the horrors of slavery. Opposition to the crimes committed to uphold that “peculiar institution” generated the social power that fueled the revolutionary overthrow of slavery through the military conquest of the slavocracy in the Civil War. In the words of Abraham Lincoln, “The blood drawn with the lash shall be paid by another drawn with the sword.”

The reports of deaths at the border and the brutalization of detained immigrant children have similarly shocked Americans, as they learn what is really happening in their country. Yesterday, Customs and Border Protection (CBP) Acting Commissioner John Sanders was unexpectedly forced to step down due to popular outrage over the reports. Nevertheless, CBP brazenly sent hundreds of children back to the most notorious facility in Clint, Texas yesterday.

Events themselves are revealing the complicity of the entire political and media establishment in paving the way for such crimes and exposing the bipartisan web of lies used to justify the assault on immigrants. NBC’s Chuck Todd joined forces with extreme reactionaries like Republican Congresswoman Liz Cheney in claiming there are no “child concentration camps” in the US, only “resettlement centers” for “illegal unaccompanied minors”.

The New York Times and Washington Post have published editorials attacking Democrats for not handing over money to Immigration and Customs Enforcement (ICE) and CBP quickly enough. On Monday, the Post specifically denounced some House Democrats for “using the hashtags #NotOneDollar and #CloseTheCamps” and for thinking the bill “will help advance the administration’s immigration and detention policies. Such thinking is irresponsible.”

The Democratic Party is collaborating with the Trump administration to fund the American Gestapo and facilitate the crackdown. More than anything else, the Democrats are terrified that growing popular opposition to the fascistic brutalization of immigrants will explode in the form of mass protests, strikes and school walkouts.

It is this fear of opposition from below that led Democratic Speaker of the House Nancy Pelosi to plead with Trump last weekend to postpone plans for mass military-style raids across 10 cities to round up thousands of immigrants. On Saturday, within hours of the planned sweep, Trump postponed the raids for two weeks and demanded that the Democrats pass legislation limiting the right to asylum and funding the anti-immigration machine. …

Pelosi and other Democrats claim the funding is necessary for “humanitarian” reasons, as if anyone believes that Trump and the American Gestapo have anything to do with humanitarianism or that their mistreatment of immigrants is due to lack of funds. By voting to hand Trump the $4.5 billion he requested, the Democrats have provided the Trump administration with the resources to arrest thousands more people. …

The increasingly violent character of the ruling class attack on immigrants is a warning to all workers. Trump is appealing to fascistic elements, especially within ICE and CBP, who are capable of greater acts of violence, including on a mass scale. With the acquiescence of the Democratic Party, Trump hopes to distract workers from the disastrous pro-corporate policies of his administration by using immigrant workers as a scapegoat for rising levels of social inequality and misery.

The urgent threat to the safety of immigrants requires the mobilization of the working class. The Socialist Equality Party calls for workers and students to organize protests, strikes and demonstrations in defense of immigrants and against the threat of dictatorship.

The SEP calls for the formation of defense committees in working-class neighborhoods, at schools and at workplaces to safeguard immigrants and mobilize the working class against the bipartisan assault on democratic rights. The worst crimes of the 20th century must never be allowed to take place again. History will judge those who fail to act.

About 40 soldiers invaded the campus of the National Autonomous University of Honduras (UNAH) firing live ammunition and tear gas into a crowd of hundreds of student protesters, leaving 20 injured. The five wounded by bullets are in “stable” condition, according to hospital authorities. The operation follows the killing of four demonstrators and maiming of dozens with gunfire last week. Videos have shown armed squads snatching protesters, and the body of a young doctor was found after he participated in protests earlier this month: here.

TRUMP’S HORRIFIC ASYLUM POLICIES BLASTED A coalition of American asylum officers urged a federal court to block the Trump administration from returning some migrants seeking refuge in the U.S. to Mexico, saying the policy was “contrary to the moral fabric of our Nation.” [HuffPost]

PARENTS OF DEAD GIRL ‘HOPED FOR BETTER LIFE’ The parents of a 6-year-old girl who died of heat stroke this month while trying to cross the U.S.-Mexico border are speaking up about the “desperate” choice they made to seek asylum in America. [HuffPost]