This video is called GERMAN STATES TOY SOLDIERS. From the Emperor Napoleon I era, including Bavaria.

By Tino Jacobson and Peter Schwarz in Germany:

With the pilot project of a Bavarian “state regiment”, the German federal government is secretly and unconstitutionally creating an armed homeland security force. This links up with the tradition of volunteer military organizations that terrorized the working class during the Weimar Republic in the 1920s and 1930s.

The Bavarian State Regiment is a joint project of the Federal Ministry of Defence, the Bundeswehr (armed forces), the Reservists Association and the Bavarian state government. The project officially began on April 1 and will be extended to the whole of Germany after a trial period until the end of 2021. The first state regiment will enter service on May 18 in Roth near Nuremberg. It includes 500 reservists, as well as five active Bundeswehr soldiers. Fifty other active Bundeswehr soldiers will take part in exercises and join up in case of emergency.

The proposal to build state regiments comes from Oswin Veith, Christian Democratic Union (CDU) member of parliament. Veith is president of the Reservists Association, funded by the Defence Ministry, and in addition to enjoying the free provision of offices, exercise areas and materials, is funded with around €14 million annually.

At the annual meeting of the Bundeswehr reserve in autumn 2016, Veith announced: “I dream that in 2026 there will be a provincial regiment in each state with a charismatic commander, a troop flag and an organization of between 800 and 2,000 reservists to support the police and the Bundeswehr in emergency situations.”

In draft guidelines, which he sent internally to association leaders the following year, Veith called for universal compulsory service, obliging all 16- to 35-year-old men and women to undertake social duties. Those who decided to serve in the Bundeswehr should be able to serve in one of 16 state regiments near their home town.

According to Veith, the state regiments would form a “national reserve” with around 30,000 posts and have a clear ideological orientation. The “reservist, who has not yet committed or wanted to get involved” should be “addressed and motivated with the positive term ‘national’”.

An internal analysis of the Bundeswehr at that time rejected this proposal on the grounds that the guidelines of the Reservists Association were “incompatible” with the German constitution. The structures of the state regiments “contradict the state’s monopoly of force” and some of the chosen formulations placed “the principles of our liberal and democratic constitution on its head,” said the Bundeswehr. But less than two years later, Veith’s proposal is being put into action, at least in part.

The Bavarian State Regiment relies on three existing reserve units: the Upper, Middle and Lower Franconia companies of the so-called Regional Security and Support Services (RSU). There are 27 such companies nationwide. Reservists include former soldiers who have retired from active duty but remain at the disposal of the Bundeswehr and, recently, specially recruited men and women between the ages of 25 and 55, who are being trained in a crash course as “soldiers lite.”

The RSU units are trained for domestic tasks that are forbidden for the Bundeswehr according to the constitution. These include “monitoring and ensuring the safety of the German air and sea areas,” “securing domestic military installations”, as well as deployment in a “domestic emergency.” In addition to natural disasters and particularly serious incidents, these emergencies include uprisings, strikes and protests that endanger the state order.

The reserve units are therefore also intended to be used as a kind of National Guard for counterinsurgency purposes. In forming the state regiments, they will receive a stronger, centralized command structure and be linked more closely with the Bundeswehr.

Colonel Stefan Helmut Berger, the first commander of the state regiment, was “extremely happy” to take on a new mission “for the homeland” and welcomed this “further opportunity for a serious reserve force. For example, the reservists have done very good preparatory work in the past 10 years in establishing the KVKs and BVKs.”

The abbreviations KVK and BVK refer to District and Regional Commands, which already exist in all federal states, and are deployed in disasters or major incidents. They would form a link between civil protection and the Bundeswehr.

The head of the Bavarian State Chancellery, Florian Herrmann, bragged about the special role of Bavaria in the pilot project, “For Bavaria, as the top reservist state, one thing is clear: we want to make better use of the reserve’s potential.”

The Bavarian state government has been campaigning for domestic Bundeswehr operations for years. It has been involved in several civil war exercises in recent years, such as: GETEX (Joint Counter Terrorism Exercise), BAYTEX and the 2017 nationwide anti-terror exercise, in which heavily armed soldiers trained to collaborate with the police in the inner cities.

The construction of a Homeland Security force is not limited to Germany. Similar developments already exist in France, Poland, Sweden, Denmark and the Baltic States. All these countries are building up national reservist troops for domestic deployment to prepare for future uprisings.

Since the 2015 terrorist attacks in France, an 85,000-strong National Guard has been created to take over the army’s domestic operations. Since the end of March, President Emmanuel Macron has been using soldiers against the “yellow vests” who take to the streets against social inequality and the “president of the rich”. The Paris military governor, General Bruno Leray, threatened that his soldiers would also use live ammunition if necessary.

In Germany, the “Bavarian State Regiment” pilot project is part of a comprehensive upgrade of all state organs—the military, the police and the secret services—and the deliberate strengthening of extreme right-wing forces. These include the new police laws in the individual federal states, the financial, personnel and material upgrades of the police and intelligence services and the construction of camps and detention centres for refugees.

The use of the Bundeswehr and the reservist associations domestically violates the constitution. The German constitution expressly excludes domestic army operations, with the exception of “natural disasters” or “particularly serious incidents”, such as the devastating 2013 Elbe flood. However, they have been practised for years and are constantly being expanded.

For example, the “new Bundeswehr Concept”, which the grand coalition presented last summer, states: “With regard to the threats in the ‘global commons,’ as well as hybrid threats in cyberspace, national and spatial boundaries, the strict separation of internal and external security is losing its significance.”

The paper, which advocates the permanent deployment of the Bundeswehr domestically and the collaboration of the military and the police, is also supported by the Social Democratic Party (SPD) and the Greens. The first joint exercises by the Bundeswehr and police in Germany not only had the backing of Defence Minister Ursula von der Leyen (CDU), but also the then North Rhine-Westphalia state Interior Minister Ralf Jäger (SPD) and Baden-Württemberg state premier Winfried Kretschmann (Greens).

The ban on Bundeswehr domestic missions was one of the lessons drawn from the Weimar Republic and the Nazi regime. The Reichswehr (Imperial Army) together with paramilitary combat units, the secret service and police had formed a state-within-the-state. Among other things, the assassination of Rosa Luxemburg and Karl Liebknecht and the bloody suppression of the Munich Soviet Republic took place exactly 100 years ago as a result of this “deep state.” 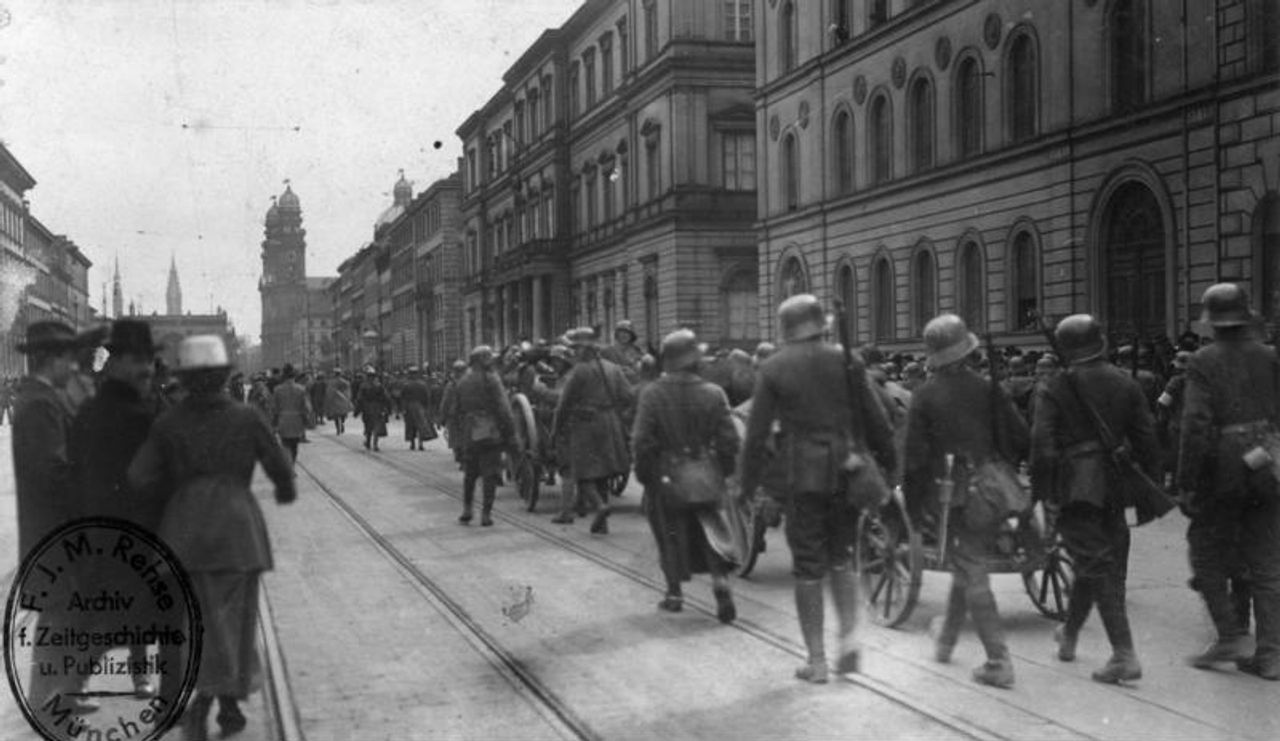 Between April to May 1919 in Munich, the Freikorps (Free Corps) brutally rampaged and murdered thousands of revolutionaries and also ordinary workers. Bavaria became an El Dorado for all types of Freikorps and military associations. They operated under the protection of the reactionary Bavarian state premier Gustav Ritter von Kahr, and the Social Democratic federal government of Ebert/Scheidemann in Berlin with their Wehrbeauftragte (Parliamentary Armed Forces Commissioner) Gustav Noske (SPD). This paved the way for other far-right formations, such as the Stahlhelm (Steel Helmets) and Nazi Sturmabteilung (SA), and finally Hitler’s seizure of power.

With the establishment of the state regiment in Bavaria, the federal grand coalition government of the Christian Democrats and Social Democrats is completely abandoning these lessons. In the death agony of capitalism, it is increasingly resorting to authoritarian methods to arm itself against the resistance of working people.