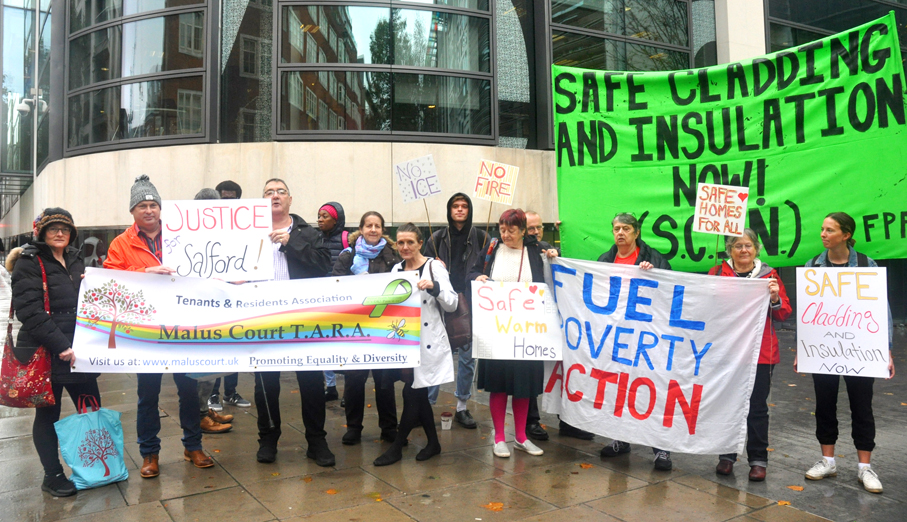 80% of flammable towers have still not been reclad

‘STILL almost 8 in 10 blocks with Grenfell type cladding have not had it replaced with over half of those with no work started at all,’ John Healey, Labour’s Shadow Secretary of Health told Parliament yesterday.

He was speaking after Tory Housing minister James Brokenshire made a statement to the House of Commons announcing a government fund providing £200m for the stripping of flammable cladding from private blocks.

To make matters worse the Tory government and the Tory-led Kensington and Chelsea Council still have not re-housed the Grenfell fire survivors.

Healey continued: ‘Who would have thought, after the solemn pledges made by the Prime Minister and other ministers in the aftermath of that terrible, dreadful Grenfell Tower fire that nearly two years on, still there are Grenfell residents in hotels and temporary accommodation, not in permanent homes.’

Emma Dent Coad, Labour MP for Kensington, tweeted that it was ‘shameful’ that residents had to wait 23 months for action, adding that the £200m fund was ‘measly’.

Only last weekend in Manchester there was a fire in a block with Grenfell-style cladding, luckily no one was killed.

And the tenants of the Manchester block called Vallea Court which has the same Grenfell-style cladding have said that they fear for their lives after a waking watch failed to rouse a number of people during the fire that broke out in the early hours of last Saturday.

People living in Vallea Court in the Green Quarter development were evacuated at around 5am when the fire started in the lift shaft on the 10th floor.

While fire alarms sounded on the floor where the fire was, they did not sound elsewhere, and most residents were woken by members of a waking watch who banged on their doors and sounded an air horn.

Joe Sharp, who lives on the eighth floor of the block, said he initially assumed the noise was from revellers returning from a night out.

‘I was eventually woken by the sound of people in the corridor,’ he said. ‘The waking watch don’t know who is in or not so if you don’t answer the door they are not going to stay there.’

Meanwhile, residents in nine blocks in Manchester’s Salford were told flammable cladding would be stripped in the wake of the Grenfell Tower tragedy. Almost two years on they’re still waiting.

Dawn Lewis is 57 and has lived in Thorn Court for more than 20 years. She said: ‘At the beginning, I didn’t want to be here. My sleep was awful. I kept thinking that the alarm was going off. You wake up thinking you can smell smoke.’

The 22-storey block sits opposite the Salford Crescent railway station and is one of the nine Pendleton Together-run high-rises that failed to meet fire safety standards.

Julie Eddison is 46 and lives in Spruce Court. She has depression, anxiety and PTSD and says she feels ‘terrorised’ in her home.

When the fire alarm was set off during the night recently, Julie said she was ‘phoned awake’ at 3.20am by a friend.

‘The alarm didn’t wake me,’ she said. ‘You can imagine the terror.’

A NEW inquiry into the process of stripping combustible cladding from hundreds of high-rise homes was announced today following pressure from campaigners, as thousands of people remain at risk. MPs on the housing, communities and local government committee will examine the adequacy of government funding for the removal of dangerous cladding: here.