Seven active military members have been discovered to belong to a white nationalist group. John Iadarola and Brooke Thomas break it down on The Damage Report.

Then, still just seven ones had been discovered …

Neo-Nazi networks exposed across US military

Over the past two months investigations published by Unicorn Riot and the Huffington Post have exposed eleven members of Identity Evropa, an American neo-Nazi organization, operating freely within the US military. The latest exposure reveals the depth to which reactionary forces are allowed to cultivate, fester and recruit within the United States armed forces across all branches and ranks.

In March 2019, independent media outlet Unicorn Riot published more than 770,000 Discord chat messages from chat servers associated with Identity Evropa. Discord is a messaging service popular with computer video game players. Combing through the chat logs, Huffington Post reporters have so far been able to identify eleven members from the white nationalist organization who are currently serving in the US military.

The chat logs reveal that all of the participants are well versed in fascist ideology and are actively recruiting throughout the United States. Members of the group frequently shared anti-semitic memes and glorified Adolf Hitler. Photos posted in the chat logs and on Twitter show members postering on college campuses with racist slogans telling potential recruits that “It’s ok to be white”. 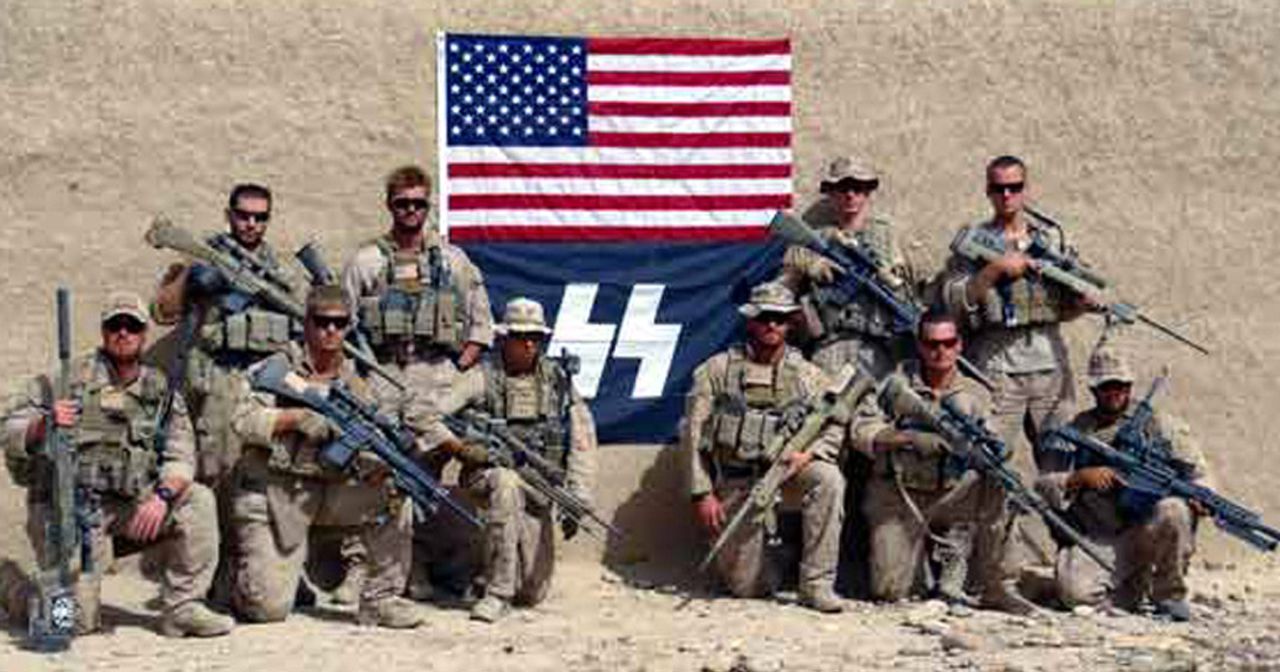 One fascist exposed in the logs is currently a Master Sergeant in the Air Force named Cory Allen Reeve. Reeve lives in Colorado Springs, Colorado where he was outed by anti-fascist activists in a flyer that was distributed throughout the community. Reeve frequently posted in the chat, encouraging members to pay more than the $10 monthly membership dues. He also shared photographs of himself at the Aurora Immigration and Customs Enforcement (ICE) Processing Center & Detention Facility in Aurora, Colorado, where he posted signs thanking the American Gestapo “…for all that you do for our country.”

Two Reserve Officer Training Corps (ROTC) college students were also exposed in the chat. Jay C. Harrison, 20, is currently enrolled at Montana State University at Bozeman and is a member of the Army National Guard. In the logs, he espoused anti-semitic lies, discrediting the veracity of the Holocaust, commenting, “I wish the Holocaust was real.” Another ROTC recruit, 23-year-old University of Rochester student and Army reservist Christopher Hodgman was identified as a member of the group. In the fall of 2018 Hodgman was responsible for posting Identity Evropa flyers and stickers throughout Brighton, New York, including on the Brighton Memorial Library and Town Hall.

The highest ranking soldier exposed as a member of Identity Evropa in the chat logs is 44-year-old Christopher Cummins, a lieutenant colonel physician in the Army Reserve. Cummins has also registered with the Military Order of Stars and Bars, a neo-Confederate organization. In the log, Cummins extolled the virtues of living in Tennessee because it is “conservative & Christian -implicitly white.”

Identity Evropa was founded in 2016 by Nathan Damigo, a former Marine who participated in two tours of Iraq. The Marines are the least racially diverse branch of the military with over 80 percent of its recruits identifying as “white.”

During Damigo’s two tours in Iraq he became radicalized and suffered from PTSD following the loss of three close friends during his deployments. In October 2007, one month after completing his second tour, Damigo, severely inebriated after celebrating the anniversary of the death of one his fellow soldiers, robbed a taxi driver at gunpoint of $43 for “looking Iraqi”. Damigo was discharged from the military and convicted of armed robbery. He was then sentenced to five years in prison where he was introduced to white supremacist literature including Ku Klux Klan leader David Duke’s My Awakening.

Upon his release from prison in 2014, Damigo began attending classes at California State University at Stanislaus. While attending college he affiliated with various white supremacist groups before forming his own organization, dubbed Identity Evropa in 2016.

Borrowing the reactionary language and methods of identity politics promoted on campuses by post-modernist professors and the pseudo-left, Damigo was able to cultivate a following with a small membership. He also began to affiliate with prominent racists including neo-Nazi and white supremacist Richard Spencer.

This relationship bore its terrible fruits in the culmination of the fascist riot in Charlottesville, Virginia in August 2017, during which 32-year-old Heather Heyer was murdered by a 20-year-old Hitler admirer who rammed his car into a crowd of counter-demonstrators.

Following the fascist rampage in Virginia, Damigo stepped down from his leadership position within the group, which has since passed on to current leader Patrick Casey. In a rebranding attempt following the disclosure of the chat logs, the group is seeking to rebrand itself as the “American Identity Movement”.

The exposure of this latest group of fascists within the military exemplifies an upwards trend in reactionary elements across all branches.

In November 2018, Pro Publica in conjunction with PBS exposed another neo-Nazi network with members who are either active in the military or previously served. This militant fascist organization calls itself the Atomwaffen Division and has focused its recruitment on college campuses and on online message boards. The group gained prominence in 2016 by distributing flyers urging students to “Join Your Local Nazis!”

The Atomwaffen Division has been implicated in five murders dating back to 2017. Its members have also been tied to plots to bomb synagogues and nuclear power plants.

One member of the group, Joshua Beckett, is a former combat engineer with the army from 2011 to 2015. As with Damigo, Beckett’s deployment in the service of US imperialism radicalized his political beliefs. “The army itself woke me up to race and the war woke me up to the Jews,” Beckett wrote online. Upon returning from Iraq, Beckett, who has admitted to suffering from PTSD, put his training to use by offering to build weapons and explosives for fellow fascists.

Finally, this week saw the Marines open another investigation—the second this year—regarding Marines posting Nazi iconography and slogans. Private First Class Anthony D. Schroader posted a picture on Instagram of him and at least four other soldiers forming a swastika with their combat boots. Earlier this year Lance Corporal Mason Mead was put under investigation by the corps after he posted images of himself in blackface along with a swastika he had formed with C-4 plastic explosives.

It is unknown exactly how many of the 2.3 million soldiers currently enlisted in the US military hold fascist sympathies or are active members of a far right organization. However, a 2017 poll conducted by the Military Times found that nearly 25 percent of service members surveyed stated they had encountered white nationalists within their ranks. That same poll found that 30 percent of those surveyed viewed “white nationalism” as a bigger threat to the United States compared to wars in Syria, Afghanistan or Iraq.

The abundance of fascists within the US military verifies what white nationalist terrorists such as Brenton Tarrant had alleged earlier this year in his now censored manifesto. Tarrant travelled throughout Europe and Asia, openly meeting with neo-Nazis. In his travels, Tarrant estimates that there are “hundreds of thousands” who hold similar views as he throughout the police and armed forces.

The cultivation and promotion of far right forces within American society by President Trump, who hailed the rampaging white supremacists in Charlottesville as “good people”, marks a conscious and violent shift of the ruling elite to the right. Similar to disaffected German soldiers following World War I, American veterans and active duty soldiers returning from war who are physically and psychologically broken are being cultivated from the top to serve fascistic interests in the name of preserving bourgeois class rule.

The multi-billion dollar US spy apparatus is more than capable of identifying and rooting out public and private communications. The fact that so many of these fascists have been outed by independent reporters speaks to the complicity of the US government in shielding these forces from exposure.

After A HuffPost Investigation, 4 White Nationalists Out Of U.S. Military — But Others Allowed To Remain. Months after a series of reports exposed a dozen known or suspected members of white nationalist groups in the U.S. military, several have separated from the armed forces. But just how seriously is the military taking extremism? Here.

RACISM AND DISCRIMINATION REMAIN ONGOING CONCERNS IN MILITARY Despite the Department of Defense issuing new guidelines on extremism, conducting training with troops and updating screening of recruits, extremism and bias are still problems in the military, an AP investigation found. New Pentagon rules do not outright ban service members from being members of extremist organizations, for example. [AP]

PROBE: WHITE POWER SIGNS AT ARMY-NAVY GAME? Military officials have launched an investigation after the “OK” hand symbol that has become known as a symbol for white power was flashed amid a crowd of cadets before the Army-Navy game in Philadelphia over the weekend. The gestures were captured on national TV during a pregame broadcast in a crowd that included black cadets. [HuffPost]

The Fascist Face Of Charlottesville Joined The Military. Then He Got Kicked Out. A rare example of the military taking proactive steps to keep an extremist — the man in a viral photo from the deadly 2017 white supremacist rally — out of its ranks: here.