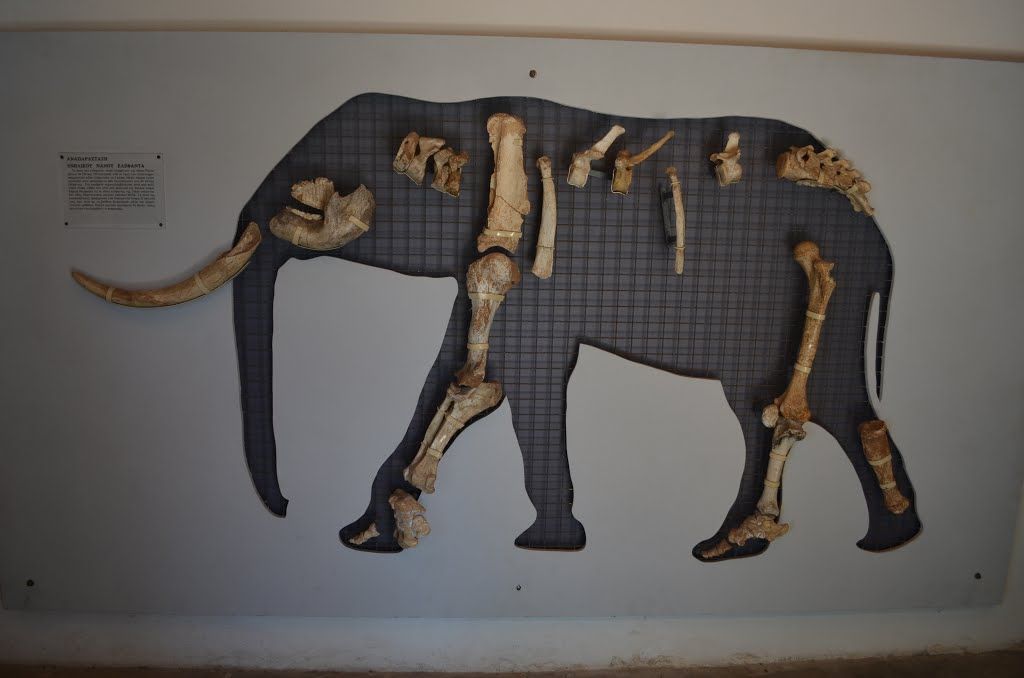 This photo shows the reconstruction of a prehistoric dwarf elephant, found on Tilos island in Greece.

From the Aegean Islands site in Greece:

Tilos is a gem of the Dodecanese islands, rich in both culture and natural beauty, and its breathtaking views represent much of its charm. From peculiar wildlife and spectacular flowers to magnificent historic villages and pure-white secluded beaches, there’s absolutely nothing you can’t find on the dazzling little island.

If you’re searching for an adventure on a lost island, how about a peek at the fossilized bones of dwarf elephants? For those interested into the island’s past, they will truly fascinate you.

On the left hand side of the road to Megalo Chorio is the Charkadio Cave where the remains of dwarf elephants were discovered in 1971. The cave is not open to the public as excavations are still not completed. In this cave also neolithic ceramics and tools made of stone have been found, just as deer bones from a much older date than the bones of the elephants (about 140.000 BC).

… Nearby the entrance, you will see the construction of a new museum which will eventually contain the finds inside the cave.

… These dwarf elephants lived on the island until about 4000 BC.

The bones of thousands of elephants have been found in the cave and this discovery was one of the first to establish the existence of elephants in Europe.

Wikipedia also mentions the dwarf elephants of Tilos, and the exhibition about them.

On 1 May 2019, we saw the brand new paleontological museum, where the elephant fossils and other finds were supposed to go. However, the building was very empty and very closed.

That evening, we heard why. The European Union told Tilos that the museum was only allowed to open if visitors would pay at least six euros. Tilos did not want that, as that would mean employing a cashier whose wages would cost more than incoming entry fees. As not that many tourists come to Tilos; the museum is a bit in the middle of nowhere; and not many tourists and Tilos inhabitants would want to pay six euros to see the small museum. Though more would come if the museum would be free.

According to the European Union, a museum should be a business out to make a profit. European Union bureaucrats are apparently better at reading the novels of pro-capitalist propagandist and Donald Trump favourite Ayn Rand than at reading books on paleontology or other sciences. Museums should be about scientific research and informing the public about science for free, not about profits.

After this 1 May 2019 elephant interlude, the blog posts on Tilos will resume in proper chronological order. So, stay tuned!