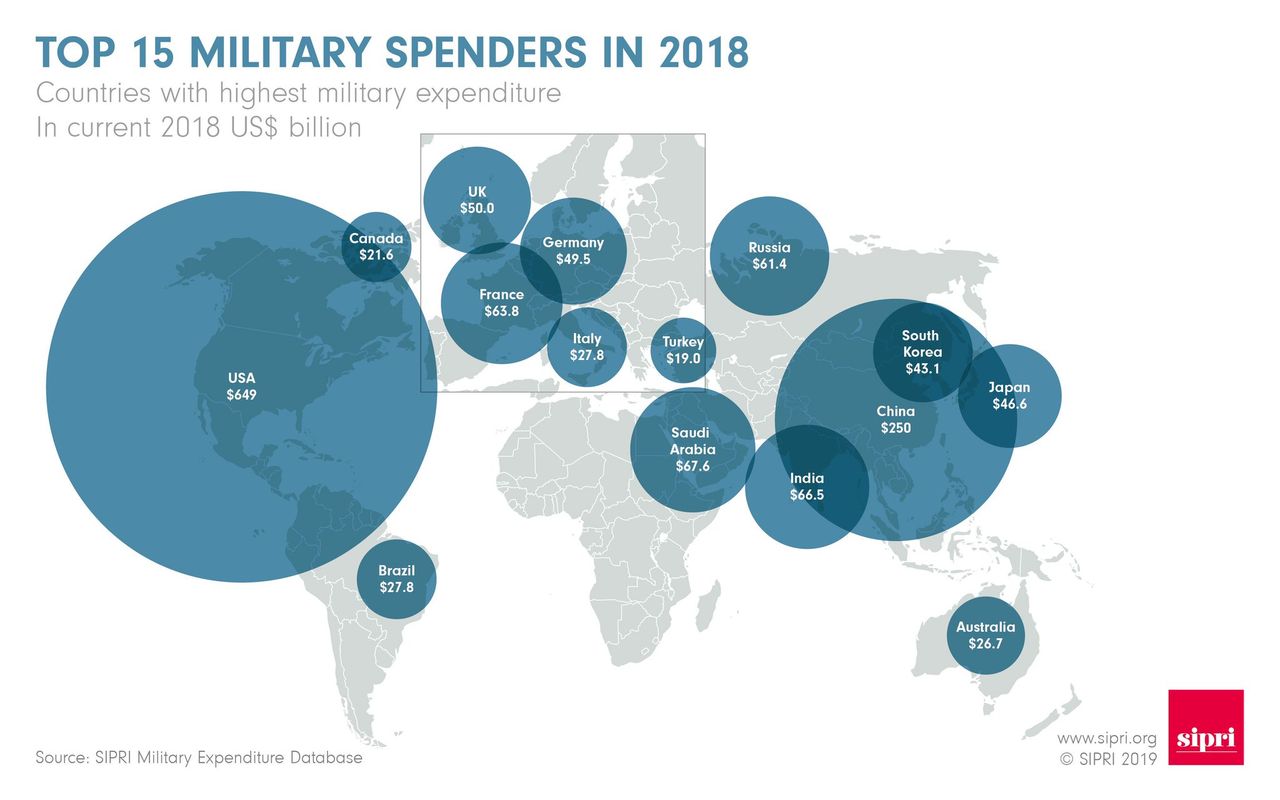 Global military spending has reached a new post-Cold War high, topping $1.8 trillion in 2018, according to an annual report published this week by the Stockholm International Peace Research Institute (SIPRI). This marks a 2.6 percent increase over the previous annual record for worldwide military expenditures in 2017.

Most notably, US military spending increased by 4.6 percent in 2018, to $649 billion … . This trend is set to continue, with President Donald Trump having signed a $686 billion budget for 2019 and requesting $718 billion for the Pentagon in 2020. The Congressional Budget Office projects that if current funding trends continue, the US will spend $7 trillion on its military over the next decade, equivalent to the amount which will be spent on education, infrastructure and public health programs combined.

The Trump administration is expending immense sums to modernize and develop the US arsenal to prepare for “great power conflicts”, with China and Russia first among its targets. The Pentagon expects to spend $500 billion over ten years in modernizing all aspects of its nuclear triad—intercontinental ballistic missiles, submarine-launched ballistic missiles and strategic bombers—including the development and deployment of more “usable” low-yield nuclear missiles.

With its continued aim of global dominance, even as its economic position continues to decline, US imperialism far outpaces allies and enemies alike in military spending. In 2018, the US spent more than two and half times the amount of economic rival China ($250 billion) and more than ten times that of the supposedly great menace Russia ($61.4 billion). All told, the US spent as much as the next eight countries combined, accounting for 36 percent of the world’s military spending.

This immense military buildup is being carried out with the support of all factions of the political establishment, without even a whiff of protest. In fact, the Democratic Party’s main critique of Trump has been from the right, demanding even greater military buildup and threats of aggression against Russia. 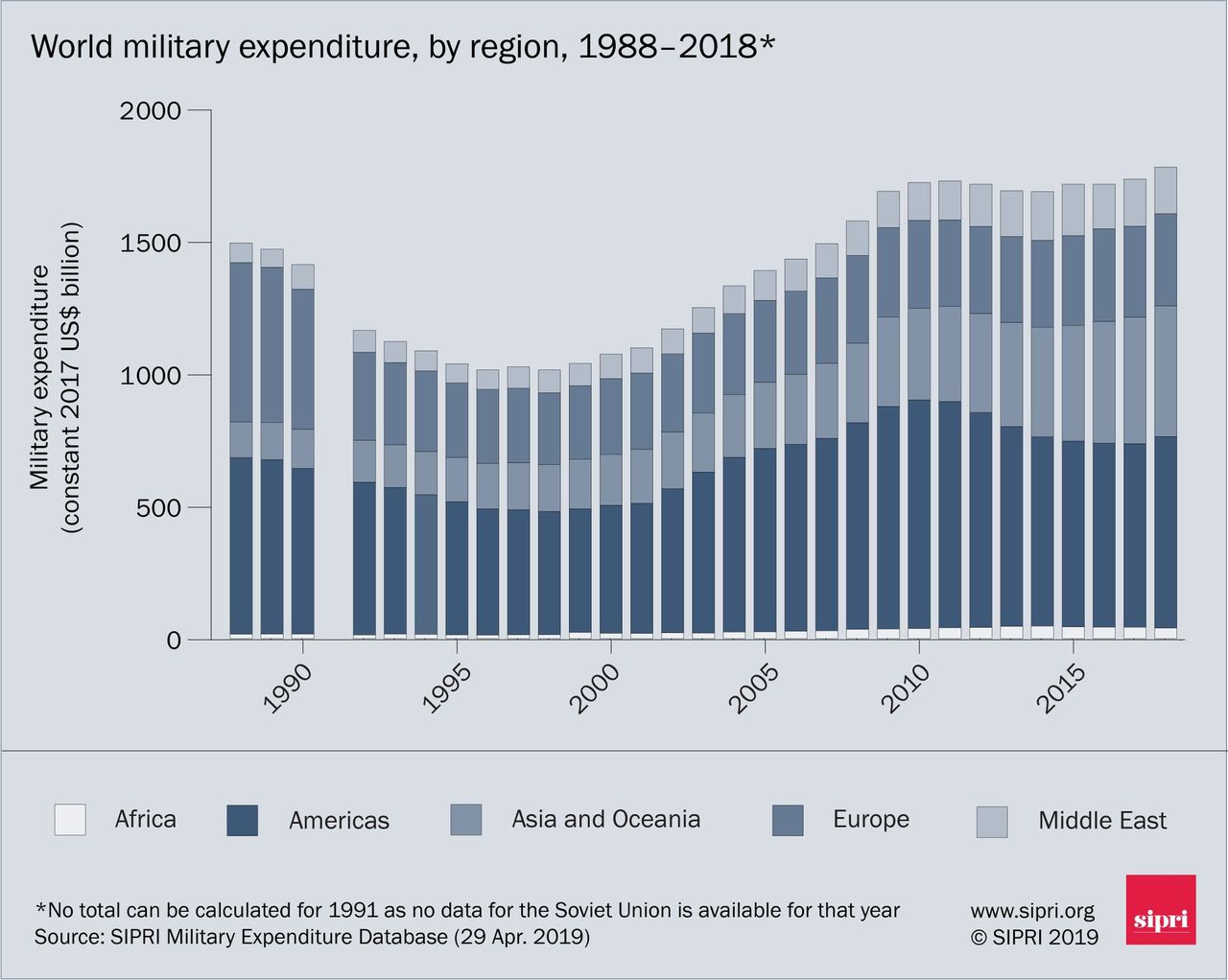 The bloody Saudi monarchy, the United States’ chief Arab ally in the Middle East, has held on to the number three spot in military spending, after leading the world in expending the greatest share of its economic output, 8.8 percent of gross domestic product, or $67.6 billion.

The Obama administration funneled more than $110 billion in weaponry to the kingdom over eight years, and the supply of weaponry and training has continued under Trump. Saudi Arabia has been waging an unrelenting onslaught against Yemen for more than four years, utilizing fighter jets and bombs supplied by the US on the defenseless population below, killing tens of thousands and pushing millions to the brink of starvation.

Meanwhile Russia did not qualify for the top five, with its spending falling for the second year in a row, being surpassed by France ($63.8 billion) and India ($66.5 billion), which dwarfs the military buildup of its neighbor Pakistan ($11.4 billion). The two South Asian nations nearly went to war with each other earlier this year.

Germany increased its world ranking from ninth to eighth, spending nearly $50 billion on its military in 2018, increasing its spending by 9 percent since 2009. The coalition government in Berlin has declared that it will increase its role in foreign military interventions in order to assert its position as Europe’s largest economy, planning to spend 1.5 percent of its GDP on its military by 2025.

While Moscow under President Vladimir Putin has been presented as a looming threat to Eastern and Central European nations, not to mention the survival of American democracy, the NATO alliance ($963 billion) outspent Russia nearly 16 to 1. Since 2016, thousands of US and Western European soldiers have been deployed to NATO member countries on or near Russia’s western border, to serve as a potential trip wire for war with one of the largest nuclear armed powers in the world.

Poland has been the spearhead of the military buildup in Central Europe, spending $11.6 billion in 2018, 8.9 percent more than the previous year and nearly 50 percent more than in 2009. With approximately 800 US soldiers currently deployed to Poland on a rotating basis just 50 miles from the Russian enclave of Kaliningrad, the Pentagon is moving towards building a permanent military base, dubbed “Fort Trump”.

Eight of the 15 countries which saw the highest relative annual increase in military spending were in Southeastern or Central Europe. Latvia increased its military expenditures by 24 percent, Bulgaria by 23 percent, Ukraine by 21 percent and Lithuania and Romania both increased outlays by 18 percent. Lithuania led Europe in its rate of increase over the last decade, hiking its military spending by 156 percent.

Spending in Asia and Oceania topped $500 billion, marking the 30th consecutive year of spending increases, led by China, India, Japan ($46.6 billion), South Korea ($43.1 billion) and Australia ($26.7 billion). Countering the rise of China has been a focus of the United States during this period, both with the military buildup under Obama’s Pivot to Asia and currently with Trump’s trade war policies. 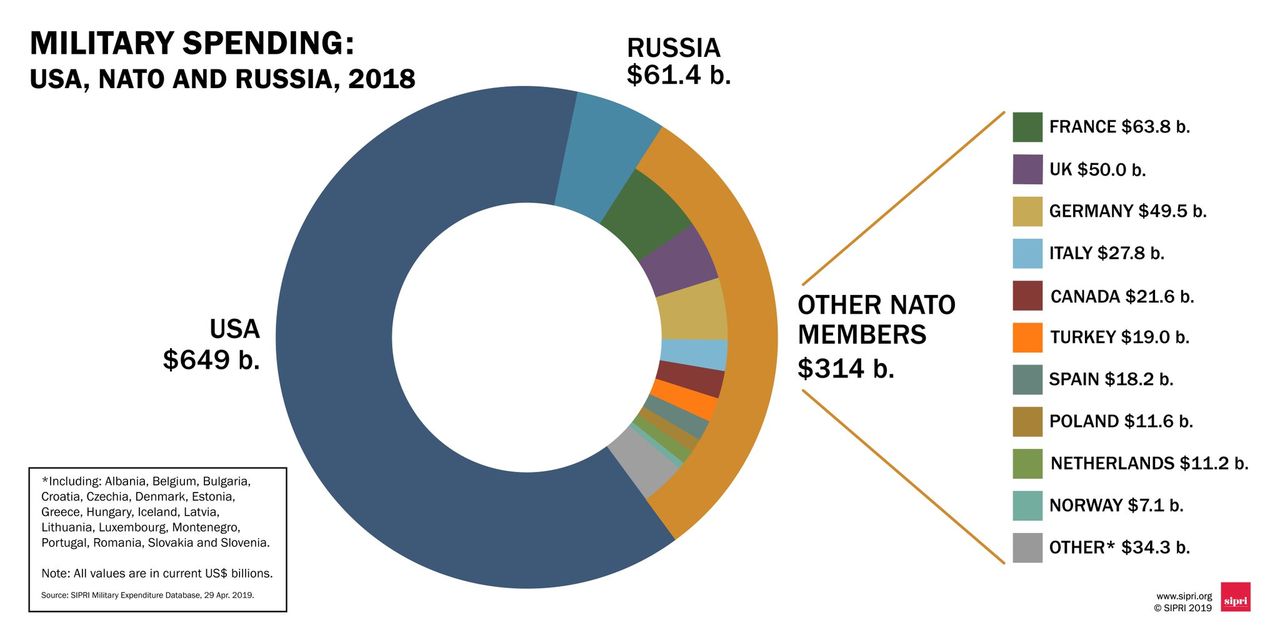 What the SIPRI figures show is that nearly three decades after the dissolution of the Soviet Union, the end of the Cold War and the much-heralded triumph of the capitalist economic order, humanity is threatened by a new arms race, led by US imperialism, which threatens the outbreak of a potentially catastrophic world war between nuclear-armed powers.

As in the First and Second World Wars, the division of the world into nation states competing for control of resources and geo-strategic chokepoints once again threatens to drag the world into catastrophe. A colossal amount of resources is being wasted by competing ruling elites in the effort to assert their regional and global economic interests at the expense of the world’s working class. SIPRI’s data shows that in excess of $41 trillion has been spent on building up arsenals of death and destruction around the world over the last three decades.

With new war crimes being prepared in Washington, D.C. and the capitals of Europe, those who exposed the past crimes of US imperialism, WikiLeaks founder Julian Assange and whistleblowers Chelsea Manning and Edward Snowden, are being silenced. The critical question facing the world’s working class today is not reform or revolution, but revolution or counter-revolution. The international working class must be mobilized to put an end to the mad drive towards war which threatens all of humanity.

The recent period has seen rising interest in socialism and the growth of the class struggle internationally.

2 thoughts on “Most taxpayers’ money ever wasted on militarism”