On Monday evening, an intense fire devastated Notre-Dame cathedral, the most frequently visited monument in Paris, with 14 million annual visitors. The fire that broke out at about 6:50 p.m. (local time) in the wooden frame of the roof of the cathedral brought down the spire approximately one hour later, and then totally destroyed the roof. A tall column of thick, yellowish smoke that poured out of the cathedral, consumed by the flames, cast a pall over the city.

The cathedral staff rapidly evacuated tourists who were inside, and the security forces evacuated nearby neighborhoods of Cité Island in Paris. When the flames spread inside the cathedral and reached the north tower, at about 9 p.m., Assistant Interior Minister Laurent Nunez issued a communiqué that it was “not guaranteed” that the structure of the cathedral would be saved. However, at about 11 p.m., firefighters announced that “The structure of Notre-Dame cathedral is saved and preserved overall.”

As 500 firefighters continued to battle the flames late into the night, one firefighter was injured and the heat inside the cathedral caused by molten lead from the collapsed roof remained intense.

At approximately 11 p.m., the Paris prosecutor’s office opened an investigation of “involuntary destruction via fire”, seemingly ruling out the possibility that the fire was caused by arson. At the time of the fire’s outbreak, major work was being done on the roof, where large scaffolding had been set up. The possibility that an accidental fire was triggered by work being done at the site “currently has the attention of investigators, given the current state of the investigations”, said a judicial source close to the probes.

Millions of people in France and internationally are in shock, faced with the devastation of an edifice whose construction began in 1153 and lasted two centuries, and which now is part of the cultural heritage of all of humanity.

Thousands of people went to the neighborhoods of Paris near the cathedral on Monday evening. One woman spoke to BFM TV through her tears and said: “I am a witness to a disaster. I am not particularly religious, but this is a symbol of our beautiful city, which already is not in a very good state, so this makes me extremely sad.”

“It is really sad, the saddest thing I have ever seen in my life,” said Sam Ogden, a British tourist who had come to Paris to visit the cathedral.

Countless art works visited and photographed by hundreds of millions of people around the world have suffered damage that is yet to be determined. These include three rose windows made of stained glass dating to the 13th century, and three organs, including the famous great organ, with its five keyboards, 109 registers and nearly 8,000 pipes. It is unclear what impact the intense heat has had on the structural integrity of the stone of which the cathedral is built.

The sadness felt at the loss to humanity resulting from the fire inevitably recalls other tragedies, such as the plundering of the Iraqi national museum under the watch of NATO countries’ occupation troops after the illegal 2003 invasion, or the Brazilian National Museum fire last year. The Brazilian government’s austerity measures had deprived the museum in Rio of necessary fire protection. Firefighters arriving to fight the flames found themselves without ladders and with unusable fire hydrants. 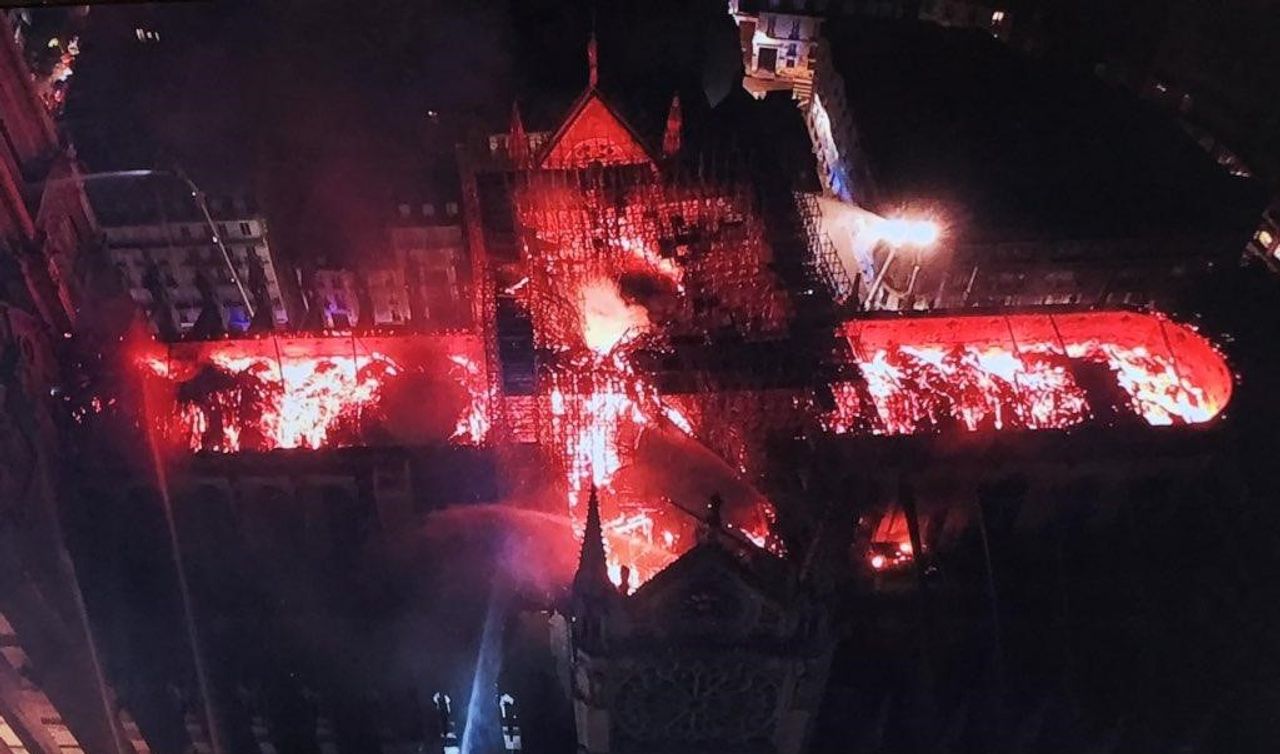 It is difficult to understand at this point how Notre-Dame cathedral could have found itself defenseless in the face of this type of fire.

Maybe the restoration work was done too fast and with too little concern for safety for financial reasons?

The vulnerability of French cathedral spires and roofs to fire has been well known for many centuries, with the cathedrals of Reims and Chartres having suffered major fires of this type in 1481 and 1506, respectively.

Notre-Dame was spared major fires not only during the Middle Ages and the Renaissance, but also during the French Revolution and the Paris Commune, when Parisian workers attacked the structure as they rose up against the Church, and also during the two world wars of the 20th century.

Despite all the vast technological advances that humanity has made in the 21st century, it is in this century that the famous cathedral was ravaged by fire. Serious questions are posed, with budgets in France and across Europe entirely turned to austerity and tax cuts for the rich, as to whether the allocation of more money on the renovation of Notre-Dame and its fire security could have averted or at least contained a blaze that ended up devastating the entire building.

It was left to US President Donald Trump to tweet a suggestion to send “flying water tankers” used in forest fires to dump water onto the cathedral in a desperate attempt to fight the flames, a comment that quickly drew a retort from France’s General Directorate of Civil Security: “The weight of the water and the intensity of the release at low attitude could, in fact, make the structure of Notre-Dame fragile and cause collateral damage to nearby buildings.”

Former FDNY Battalion Chief John LaFemina explains why President Trump’s firefighting suggestion of “flying water tankers” would not have worked in the battle against the Notre Dame Cathedral fire.

President Emmanuel Macron visited the Notre-Dame site, accompanied by Prime Minister Edouard Philippe and Paris Mayor Anne Hidalgo. Earlier in the evening, Macron had postponed a planned speech in response to the demands of the “yellow vest” movement, which has carried out five months of protests against Macron and his policies of austerity and widening social inequality.

Statements of solidarity came from governments around the world. The German, British, Turkish, Italian, Spanish and Portuguese governments, as well as the Vatican and the city of London, all made statements indicating their sadness. Macron, for his part, gave a brief and perfunctory speech in front of the cathedral, pledging that it would be rebuilt.

It seems likely that the cathedral will now be closed for repairs for a number of years.

Finish the Mission, save Notre Dame!
A tribute to the firemen. pic.twitter.com/qTWTIXcWaN