This 11 April 209 video from the USA says about itself:

Wikileaks co-founder Julian Assange has been arrested in London and faces extradition to the United States in response to a new indictment by the Trump Justice Department.

In a special report, Ari Melber examines the controversial nature of Assange’s arrest by the current administration noting that the indictment against Assange does not show him stealing anything, coordinating with spies or doing espionage.

Melber demonstrates how in fact, the indictment could be viewed as an aggressive and potentially chilling document for journalists in the U.S. and abroad.

“The fight starts now to prevent his extradition to the United States!”

Supporters to rally in defence of Assange outside Belmarsh Prison, London

A protest will take place today outside Belmarsh Prison in London, where WikiLeaks founder Julian Assange is being held following his forcible seizure and arrest Thursday.

The protest will be held from 4pm. It is organised by the Julian Assange Defence Committee and is supported by the Socialist Equality Party (UK) and the WSWS. 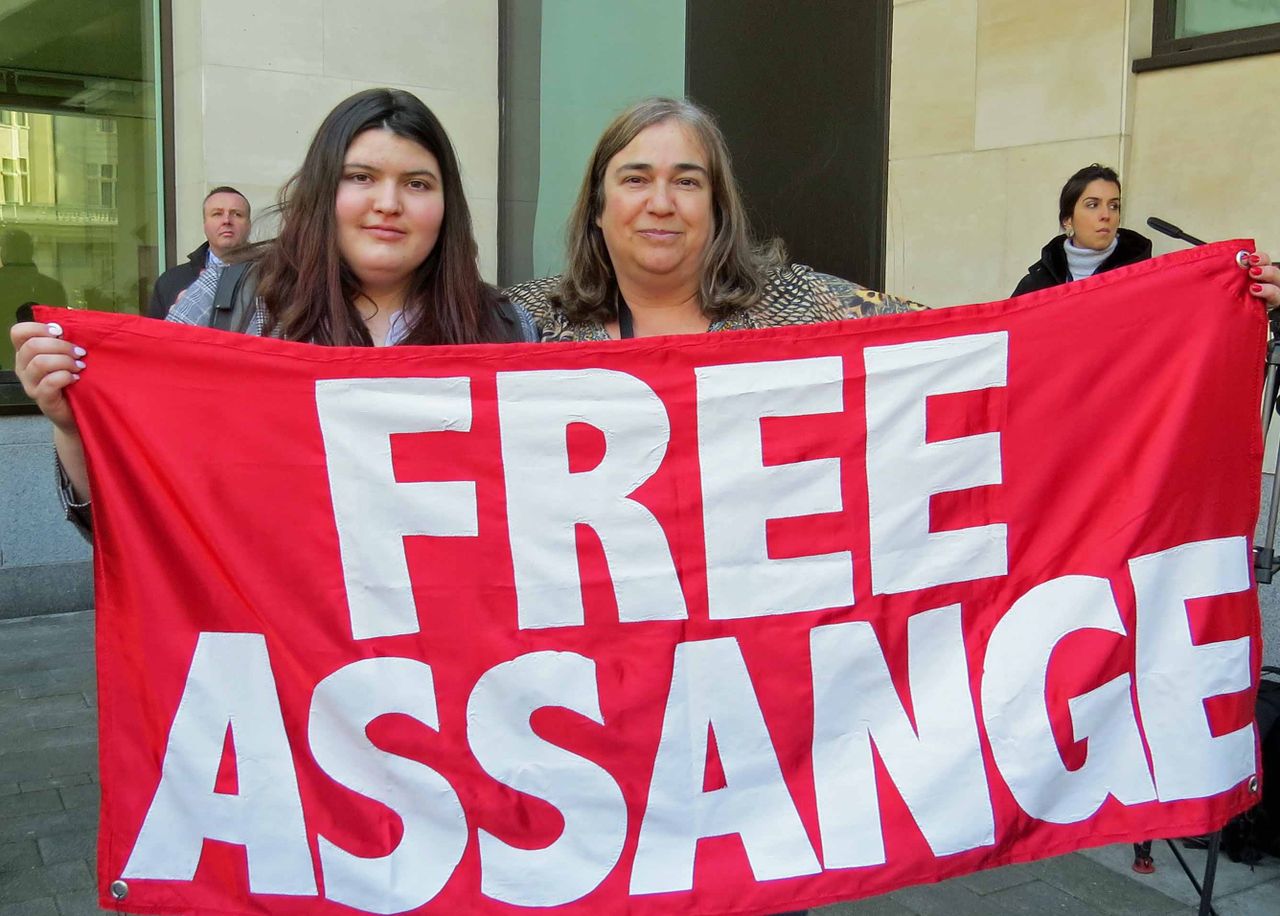 Announcing the protest on the Wise Up Action blog, Emmy Butlin, who has helped maintain a vigil outside the Ecuadorian Embassy where Assange was forced to stay for seven years in arbitrary detention, wrote, “Our own journey of support continues in the best tradition of solidarity, with a vigil outside Belmarsh Prison where Julian Assange is held. Join us on Saturday 13th of April at 4pm outside Belmarsh prison, Western Way, Thamesmead, London SE28 0EB. For more information e-mail JADC@protonmail.ch.”

The SEP and WSWS urge anyone able to attend to do so.

Assange was railroaded to Westminster Magistrates Court after being dragged from the Ecuadorian embassy on Thursday and was found guilty of bail charges dating back seven years. Julian Assange Defence Committee members were among those protesting outside the court who WSWS spoke to on Thursday. 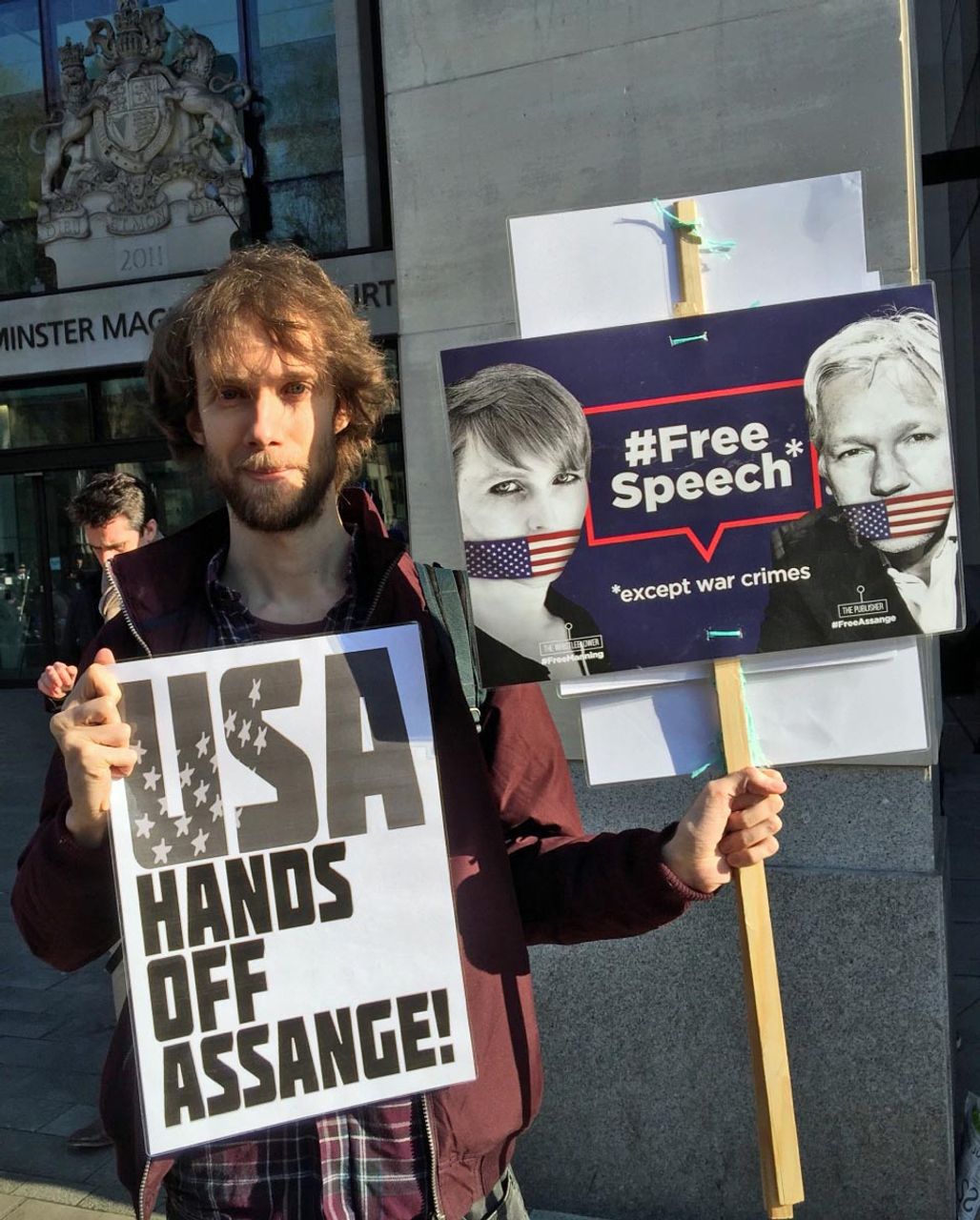 Ross said, “This is the day supporters of a free press have been dreading for years. A publisher of truthful information in the public interest has been imprisoned at the request of a foreign power.

“The footage of Julian being carried out of the embassy speaks volumes about his character. He has resisted pressure to leave the embassy since [Ecuadorean President Lenin] Moreno came to power. Even though he was denied his human rights, his ability to communicate freely and medical treatment for all this time, he refused to abandon his right to asylum and had to be carried out. … 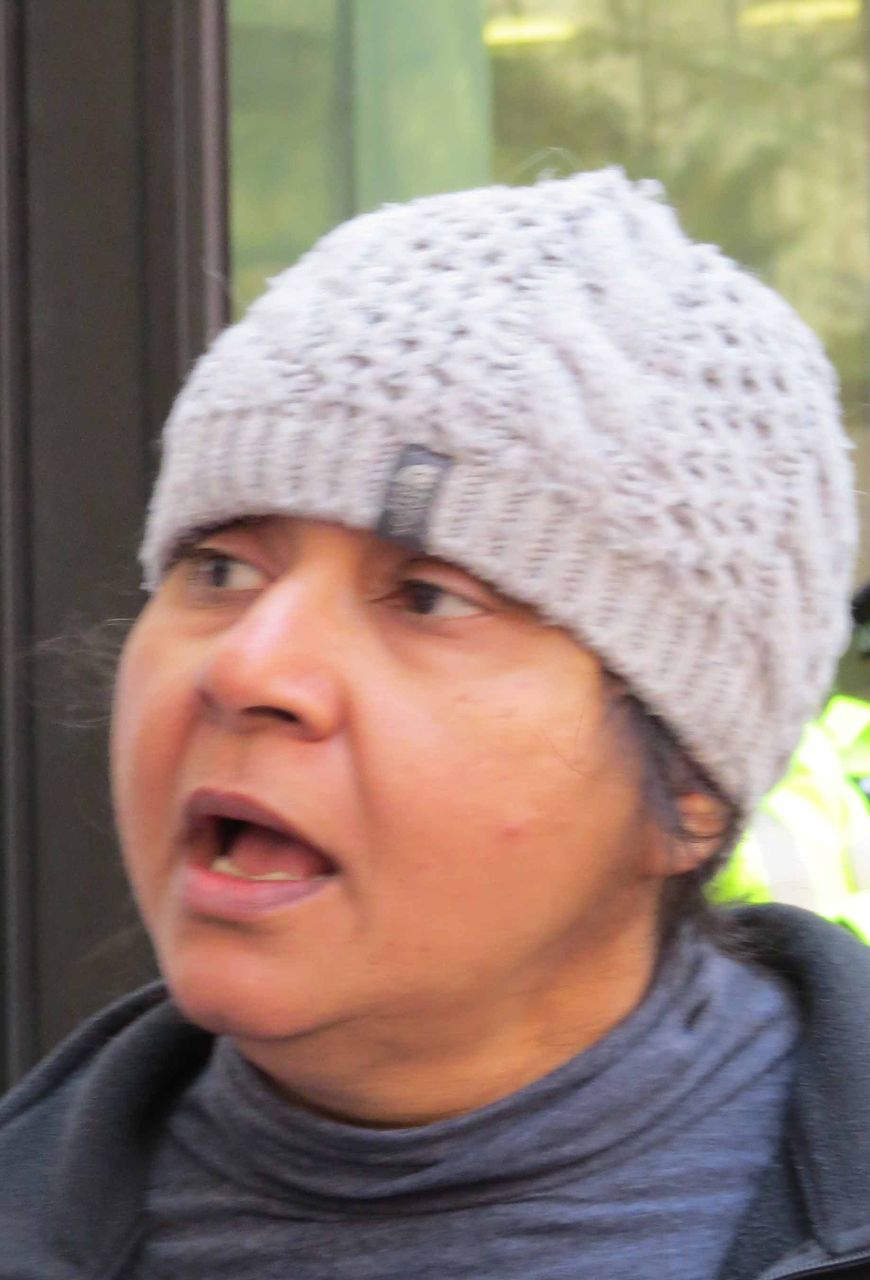 “What we get is barefaced lies from our press, who act as mouthpieces and propaganda spreaders for our government and security services. The ruling against Julian has shut down our rights to asylum and our human rights. We no longer have a free press. The fight starts now to prevent his extradition to the United States!” 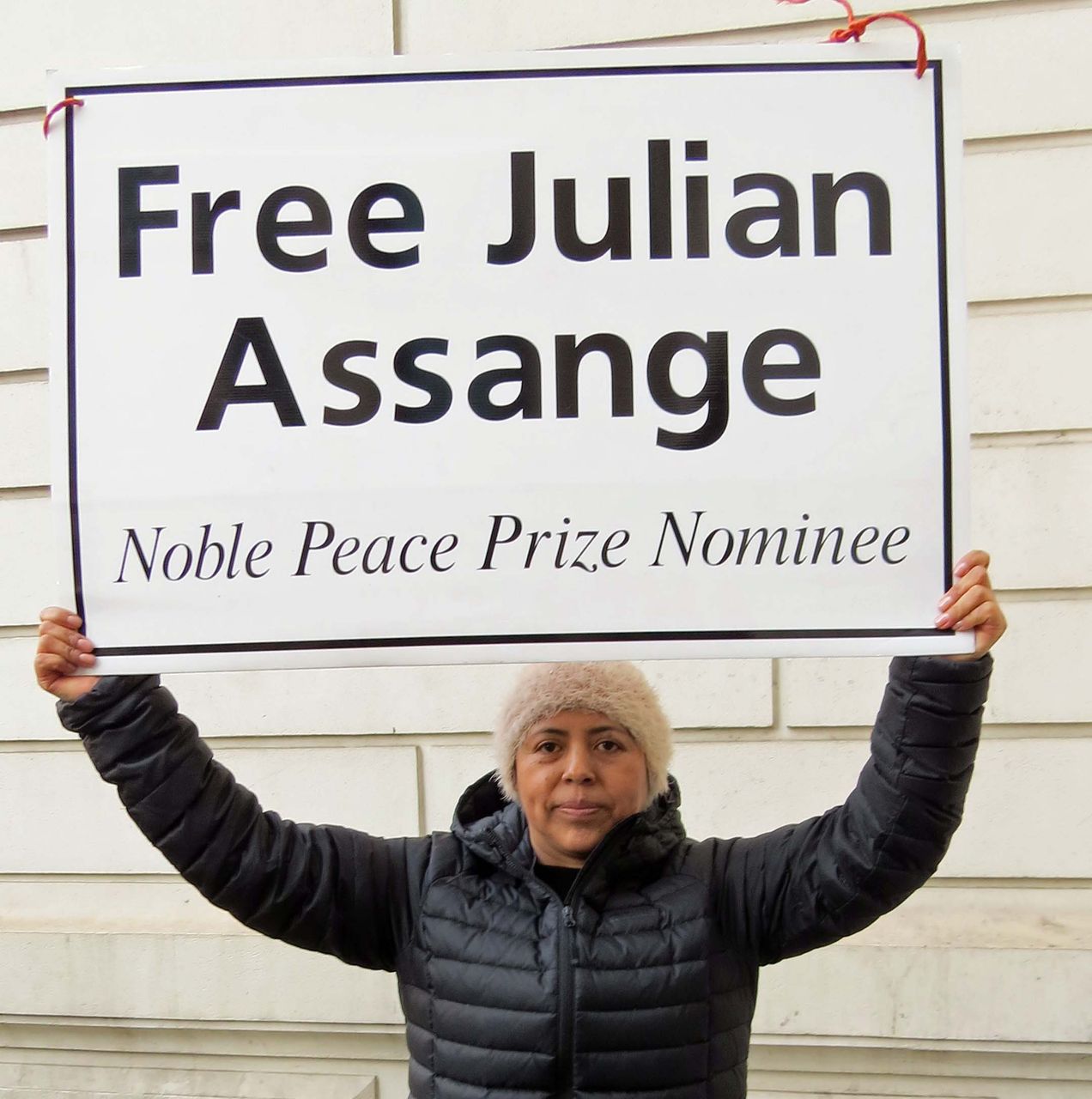 Sandra, from Ecuador, was angry at the role of Ecuadorian President Moreno, who had gone on TV to justify handing Assange over to the British police.

“Many of us thought that when Moreno came to power in 2017, he would continue the policy of the previous government where he worked closely with Rafael Correa [as his vice-president] for several years and protect Julian Assange. But we were badly wrong. Moreno has broken our asylum laws and sold us out to the American and British government. I think it is down to working class people to work together for human rights and equality.”

Nina Cross, a writer for 21stcenturywire.com said, “We are very concerned about the fate of Julian Assange. Chelsea Manning is already locked up. The mainstream media just don’t seem to get what is happening is not just about Julian. This is about shutting down freedom of the press.”

Cross explained how at the same time as the government was plotting the removal of Assange from the Ecuadorian Embassy, British Foreign Secretary Jeremy Hunt was making a “ridiculous” hypocritical announcement to a G7 summit meeting that Britain would be leading a new “Media Freedom” campaign around the world.

Probably meaning ‘Media Freedom’ for Rupert Murdoch and not for anyone else.

“Four days after Hunt’s fake ‘Media Freedom’ campaign was announced, the threat to expel Julian Assange was leaked. Two days after that a White Paper was announced bringing in effectively what will be censorship for British media”—a reference to the government’s “Online Harms” white paper giving powers to an internet regulator to ban “non-compliant” websites from being accessed in the UK.

“This is a massive threat to freedom of speech, of freedom online. It is beyond hypocrisy for Jeremy Hunt and the British government to claim they are running this campaign in defence of media freedom, which is entirely fake.

“You can’t believe anything the government or press put out, but events will expose their lies and propaganda. The WikiLeaks press conference yesterday [which exposed an illegal surveillance operation against Assange inside the Ecuadorian embassy] was shameful. The co-editor of WikiLeaks [Kristinn Hrafnsson] even had to ask journalists why they weren’t asking questions of the authorities.” 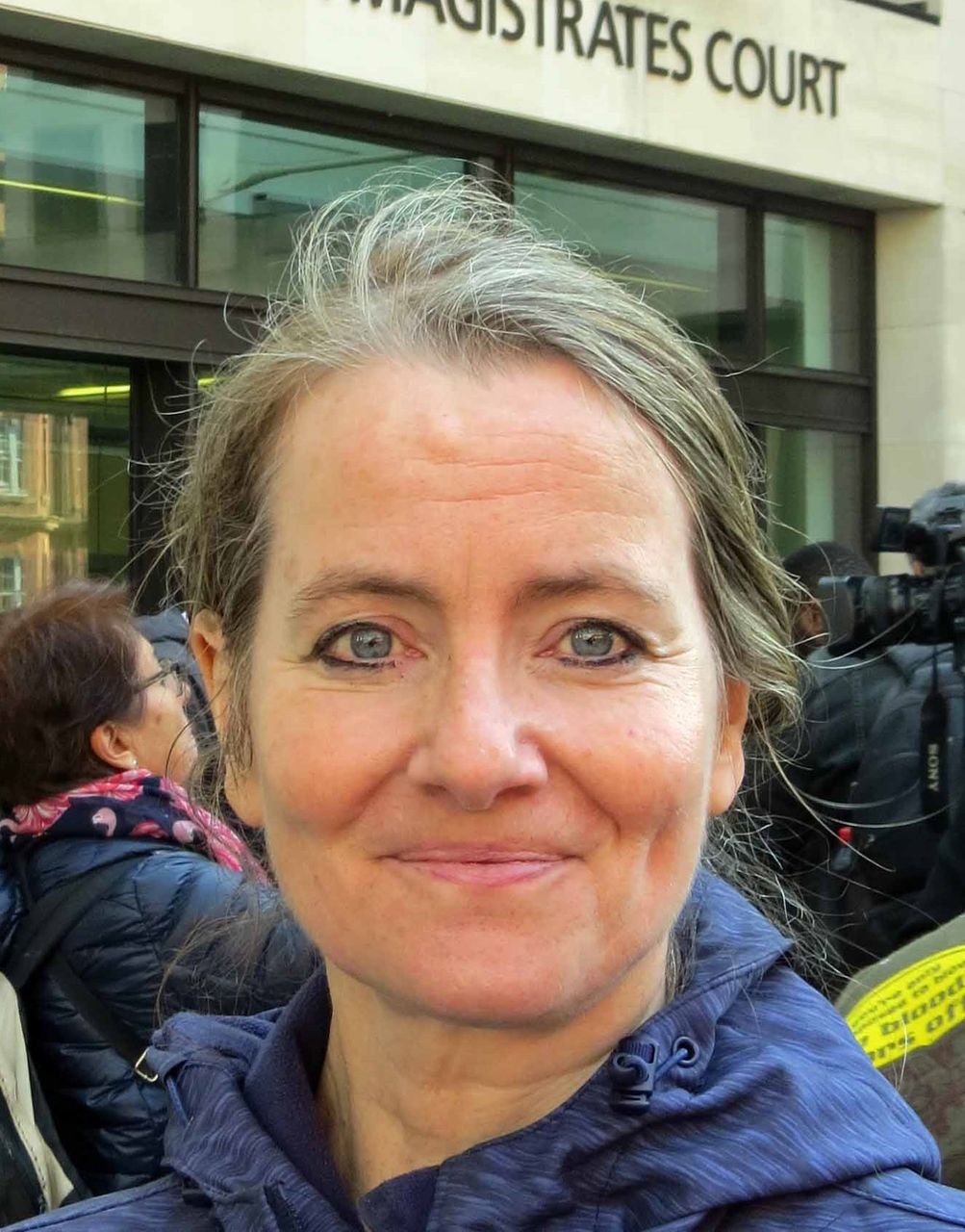 Nina was scathing about the mainstream media who formerly worked with Assange saying, “The Guardian has published blatant lies about Julian Assange. They have tried to implicate him in ‘Russiagate’, saying he had met up with Donald Trump’s former campaign chairperson Paul Manafort. That was a complete lie. There was no evidence, but the Guardian has not responded to our questions or retracted what it said. They are complicit in what has happened to Julian.”

Cross also criticised international human rights lawyer Amal Clooney who has accepted Hunt’s offer to head his “Media Freedom” campaign as his special envoy and sat next to him at the press conference. “She used to be Julian’s legal counsel. She’s not here today. Her absence has been noted by some of us”, she explained.

Mike said, “For weeks in the US we have been inundated with stories of how the Trump administration is trying to let the Saudi Arabian dictatorship off the hook for the murder of Jamal Khashoggi in Turkey last year. They are preventing low level members of the regime from entering the US but protecting Prince Mohammed bin Salman and his circle. Until last week, the media said virtually nothing about Julian Assange, the person who lifted the lid on such filthy diplomatic intrigues. 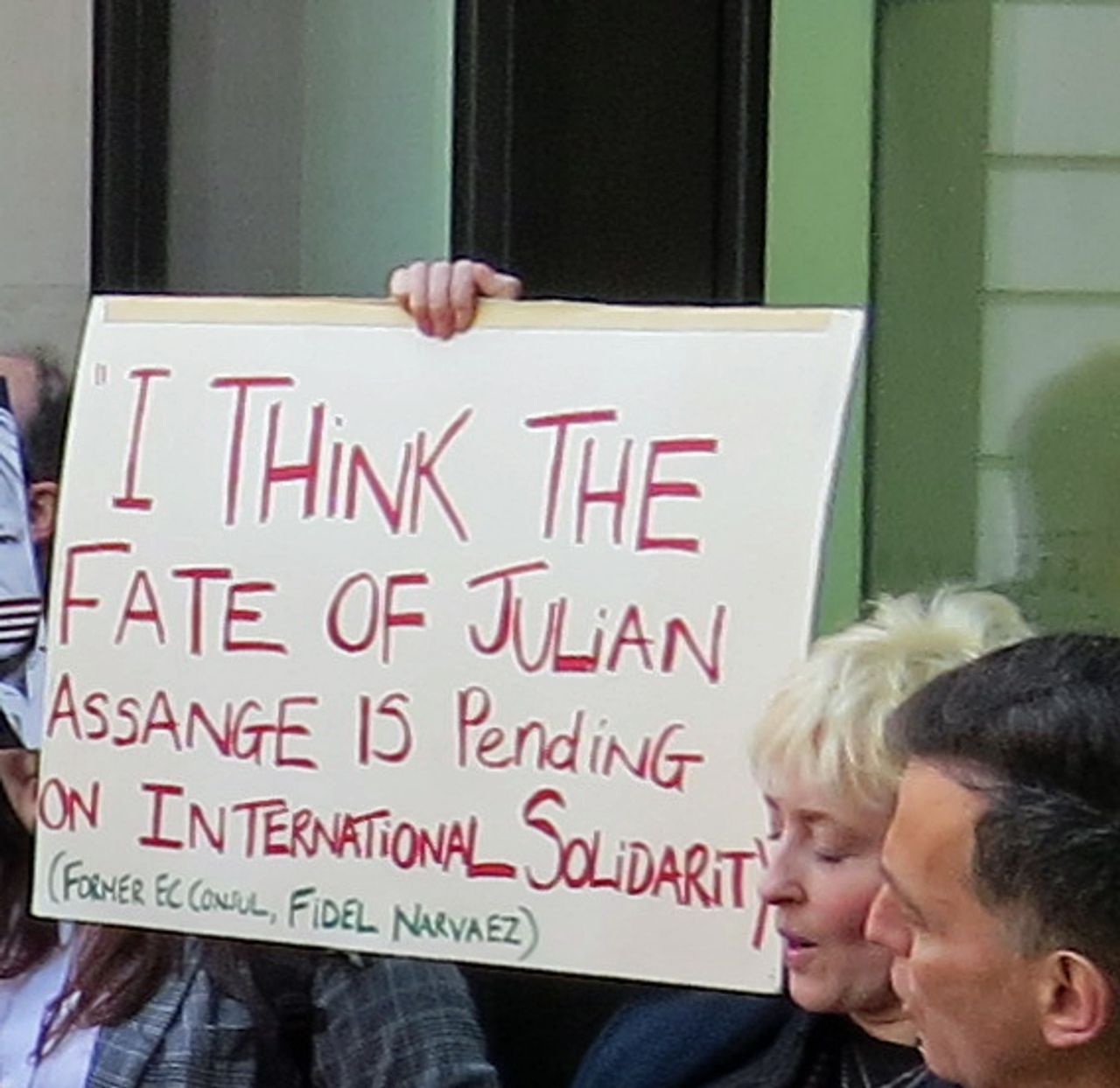 “I have followed the WSWS coverage of Julian Assange and it has been brilliant. It has not only written about what has happened but taken the initiative and organised rallies as well. It’s important to have a strong political answer. It’s good that Julian’s supporters are here but we need more than shouting slogans such as “The people united will never be defeated”. Not only have people been disunited by the lies and propaganda thrown at Julian, but every scoundrel calls for unity as long it is behind them. We must be very selective about what sort of ideas people should be united behind.

“I think the WSWS has done a wonderful job of unmasking those calling themselves liberals or socialists but who have done nothing to help Julian, or even worse, repeating all the lies and slander against him. We know the Swedish government wanted to drop the allegations against Julian years ago [in 2013] but it was the British government that said no.

“There is a big divide opening up between those people who abandoned Julian Assange and those of us who believe in democracy, a free press and a better world. The Assange case is a really defining moment.”

Ulrich Rippert, chairman of the [German] Socialist Equality Party (SGP), addressed a rally in front of the British embassy in Berlin, Germany, demanding the freedom of WikiLeaks publisher Julian Assange. Rippert explained why the mobilization of the working class is necessary to defend freedom of expression. Sevim Dağdelen, a Left Party MP and organizer of the rally, introduces Rippert.