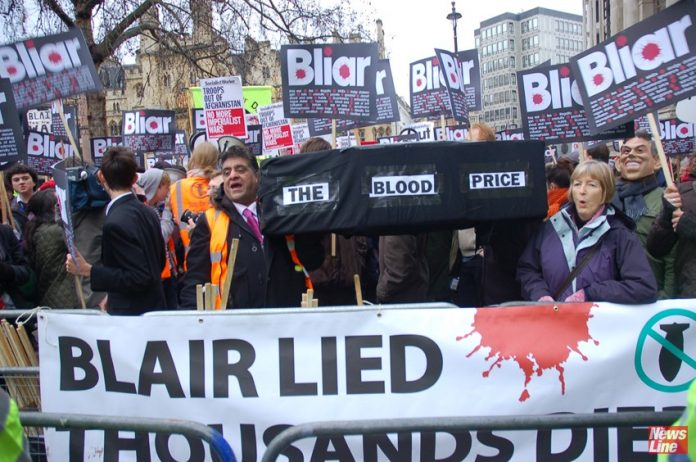 WAR ON IRAQ PLANNED LONG BEFORE 2003

SIXTEEN years on from the start of the illegal US-led invasion of Iraq, further evidence has emerged that the war was planned long before the attack took place and that the stated reason for it, ie ‘Iraqi Weapons of Mass Destruction’ was bogus.

Speaking before the House of Commons Constitutional Affairs Committee last week, the former head of the Royal Navy, Admiral The Lord West of Spithead, revealed that he was told in June 2002, ‘that we would be invading Iraq with America at the beginning of the following year’.

‘It was quite clear that the Government were thinking we have to get Parliament and others on side. But what was interesting was that as it developed, there was all this stuff on weapons of mass destruction and everything, and it did seem to me that people were looking for a casus belli that they could discuss in Parliament,’ Lord West said.

Let’s think back to what we – the public – were actually told in 2002/3. Bush and Blair and their acolytes repeatedly said that the Iraqi leader Saddam Hussein could prevent war by admitting he had WMDs and disarming.

As late as 25th February 2003, Blair was saying that ‘even now’ Saddam could avoid war by ‘accepting the UN route to disarmament.’ ‘I do not want war,’ he told the House of Commons. ‘I do not believe anyone in this House wants war. But disarmament peacefully can only happen with Saddam’s active co-operation.’

But it’s clear that whatever Saddam did, he and his country were going to be hit with Shock and Awe. The whole charade of weapons inspectors, sent in to search for weapons that were not there, was designed to try and convince people that war was a last resort and not the first option.

Crucially, the invasion had to come before the weapons inspectors finished their job and gave Iraq a clean bill of health – as then the pretext for war would have gone. Admiral West’s revelations, which follow on from similar comments he made in 2016, are not the only ones we’ve had from Inside the Tent figures about what was really going on in 2002/3.

In his memoir My Life, Our Times, published in November 2017, Gordon Brown, the Chancellor of the Exchequer in 2003, admitted that the Iraq War was ‘not justified’.

He also said ‘we were all misled on the existence of WMDs’.

According to Brown, a key US intelligence report which not only refuted the claim that Iraq was producing WMDs, but also their ‘current ability to do so’, was not seen by the British government. An attempt to pass the buck? You make your own mind up. Earlier, the former British Ambassador to Washington, Sir Christopher Meyer, said that President Bush had first asked Tony Blair for his support in a war against Iraq at a private White House dinner just nine days after the 9-11 terror attacks, which had absolutely nothing to do with Iraq.

We also know from the Chilcot Inquiry that on 28th July 2002, Tony Blair sent Bush a memo in which he pledged ‘I will be with you, whatever.’ He went on: ‘The military part of this is hazardous but I will concentrate mainly on the political context for success’.

That involved trying to ‘encapsulate our casus belli in some defining way’, with weapons inspections the chosen route. ‘If he (Saddam) did say yes, we continue the build-up and we send teams over and the moment he obstructs, we say: he”s back to his games.

‘That’s it. In any event, he would probably screw it up and not meet the deadline, and if he came forward after the deadline, we would just refuse to deal.’ As for timing, Blair says ‘we could start building up after the break. A strike date could be Jan/Feb next year.’

Blair continued to scare us witless right up to the launch of the invasion in March 2003 about Saddam’s deadly arsenal. A critical claim, contained in the so-called ‘September Dossier’, was the one that Iraq possessed chemical weapons which could be assembled and launched within 45 minutes.

This led to the infamous ‘Brits 45 minutes from Doom’ headline in Rupert Murdoch’s Sun and similarly terrifying headlines in other newspapers. Yet in 2004, Blair said that he had not realised before the war that the alleged weapons were not missiles but only battlefield munitions.

Former Foreign Secretary Robin Cook wrote in the Guardian: ‘I was astonished by his reply as I had been briefed that Saddam’s weapons were only battlefield ones and I could not conceive that the prime minister had been given a different version.’

In July 2003 a Foreign Affairs committee report declared: ‘We conclude that the 45 minutes claim did not warrant the prominence given to it in the dossier, because it was based on intelligence from a single, uncorroborated source.’

It is clear that the Iraq War was a plan hatched by neocon extremists in Washington and lurid claims of Iraqi WMDs, which did not exist, were made to justify it. The Nuremberg Judgement of the trial of the WW2 Nazi leaders stated: ‘War is essentially an evil thing. Its consequences are not confined to the belligerent states alone, but affect the whole world.

The Iraq War was clearly a war of aggression, and as such, an example of ‘the supreme international crime’, yet, sixteen years on, no one has been held accountable for it. That’s in spite of over 1m people losing their lives following the invasion and the war greatly increasing the threat from terrorist groups.

Even Tony Blair himself has conceded there were ‘elements of truth’ in the claims that the Iraq War led to the rise of Daesh/IS [ISIS]. Worse still, the war on Iraq was followed by more aggression against Libya, in 2011, and Syria, wars which like the invasion of Iraq, have helped provoke a refugee crisis of Biblical proportions.

It was on that date that a letter was sent to President Clinton, on behalf of the neoconservative ‘Project for a New American Century’.

The letter called for ‘removing Saddam Hussein and his regime from power. That now has to be the aim of American foreign policy’. Among the signatories to the call to arms were Elliott Abrams and John Bolton.

Abrams is now the US special envoy to Venezuela– and seeking regime change in Caracas, while Bolton is President Trump’s National Security Advisor and warning us about Iran’s ‘nuclear weapons programme’. It’s as if the Iraq War never happened.

– Invaded Iraq on a pack of lies

Where is this “soul” you speak of? https://t.co/TZtzrAmg2i